Nonketotic hyperglycemia (NKH) is characterized by hyperglycemia with little or no ketoacidosis. Diverse neurological symptoms have been described in NKH patients, including choreoathetosis, hemiballismus, seizures, and coma in severe cases. Homonymous hemianopia, with or without occipital seizures, caused by hyperglycemia is less readily recognized.

We describe a 54-year-old man with NKH, who reported seeing round, colored flickering lights with right homonymous hemianopia. Cranial magnetic resonance imaging demonstrated abnormalities in the left occipital lobe, with decreased T2 signal of the white matter, restricted diffusion, and corresponding low signal intensity in the apparent diffusion coefficient map. He responded to rehydration and a low-dose insulin regimen, with improvements of his visual field defect.

Patients with NKH may present focal neurologic signs. Hyperglycemia should be taken into consideration when making an etiologic diagnosis of homonymous hemianopia.

Core Tip: Nonketotic hyperglycemia is one of the most common endocrine emergencies. Patients with nonketotic hyperglycemia may present with various neurologic symptoms. We report a case of homonymous hemianopia with occipital seizures caused by hyperglycemia. Aggressive glycemic control and adequate hydration can reverse neurologic deficits. Subcortical T2 and fluid-attenuated inversion recovery hypointensity on resonance imaging were identified as characteristics.

Nonketotic hyperglycemia (NKH) is a clinical syndrome consisting of hyperglycemia, hyperosmolality and intracellular dehydration with little or no ketoacidosis[1]. In such cases, the level of insulin is sufficient to inhibit free fatty acid mobilization, but fails to support transmembrane transport of adequate glucose into cells. Diverse neurological symptoms have been described in NKH patients, including choreoathetosis, hemiballismus, seizures, somatosensory symptoms, headache, nausea and vomiting, and coma in severe cases[2-5]. Seizures occur in 15%-40% of patients with NKH, and the majority are focal motor seizures and epilepsia partialis continua[6,7]. Homonymous hemianopia, with or without occipital seizures, caused by hyperglycemia is less readily recognized. Here, we report a case of homonymous hemianopia and visual hallucination associated with NKH, in addition to a review of the related literature.

A 54-year-old man presented to the neurologic clinic of The Fourth Affiliated Hospital Zhejiang University School of Medicine, after episodes of seeing round, colored flickering lights, and reporting that he “can't see things in his right visual field” 7 d before admission.

One week prior to admission, the patient saw paroxysmal green and red flickering lights in his right visual field. He then experienced blurred vision in his right visual field. He visited a local ophthalmic clinic several days before coming to our hospital, and a visual field examination showed a right homonymous hemianopia (Figure 1). His visual field defect improved partially without treatment. The paroxysmal flickering lights lasted for about 3 d before remission, but there was no further improvement in his hemianopia. 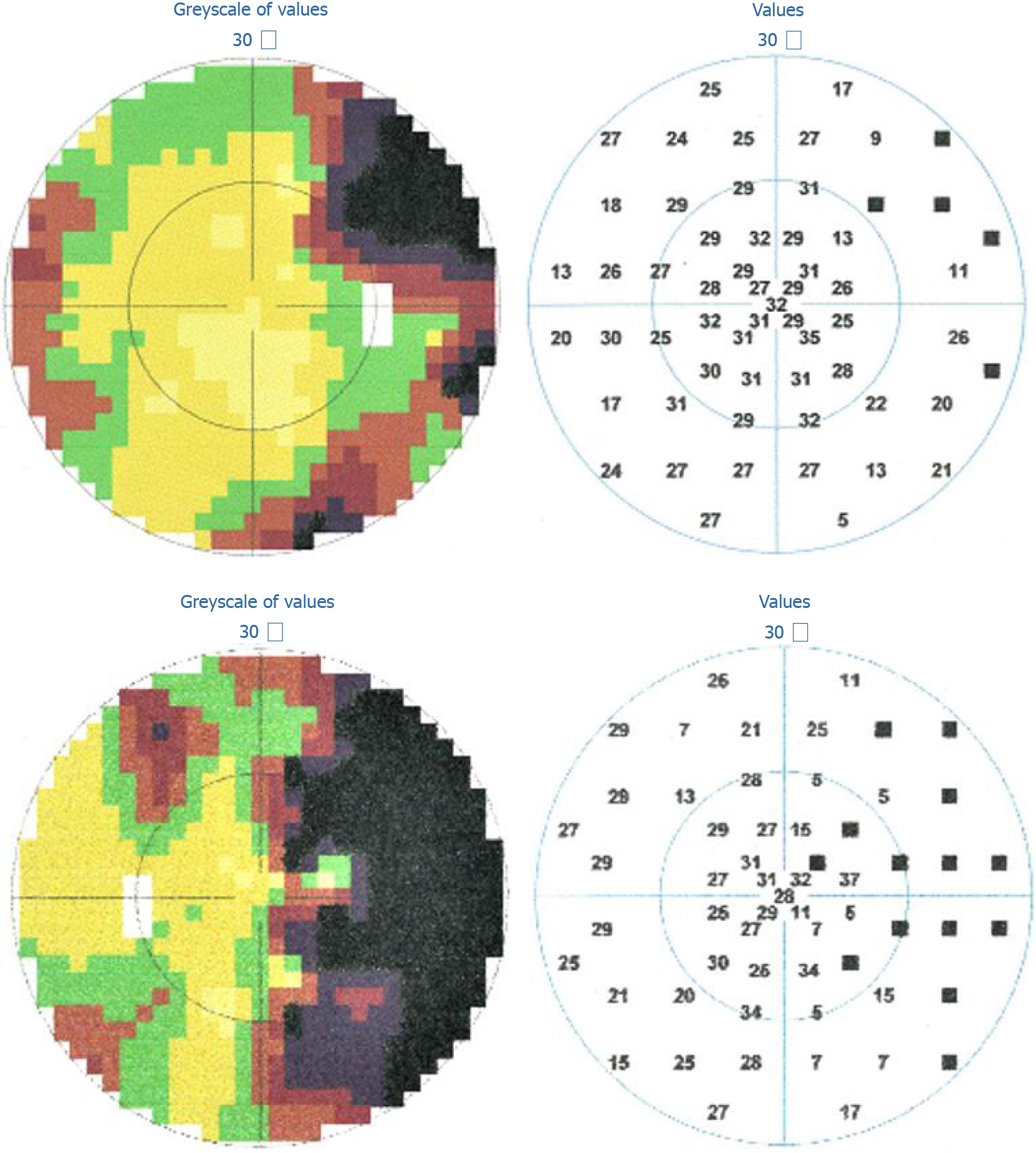 Figure 1  Visual field over the central 30 degrees showed a right homonymous hemianopia.
History of past illness

The patient was otherwise healthy. He denied a history of hypertension, diabetes mellitus (DM), prior cerebrovascular disease or other neurological complications.

The patient was a journalist with a height of 178 cm and weight of 76 kg. He had no history of drug use, drinking, smoking, or bad sexual life. One of his four siblings had DM, and there was no family history of stroke, epilepsy, or other neurologic diseases. 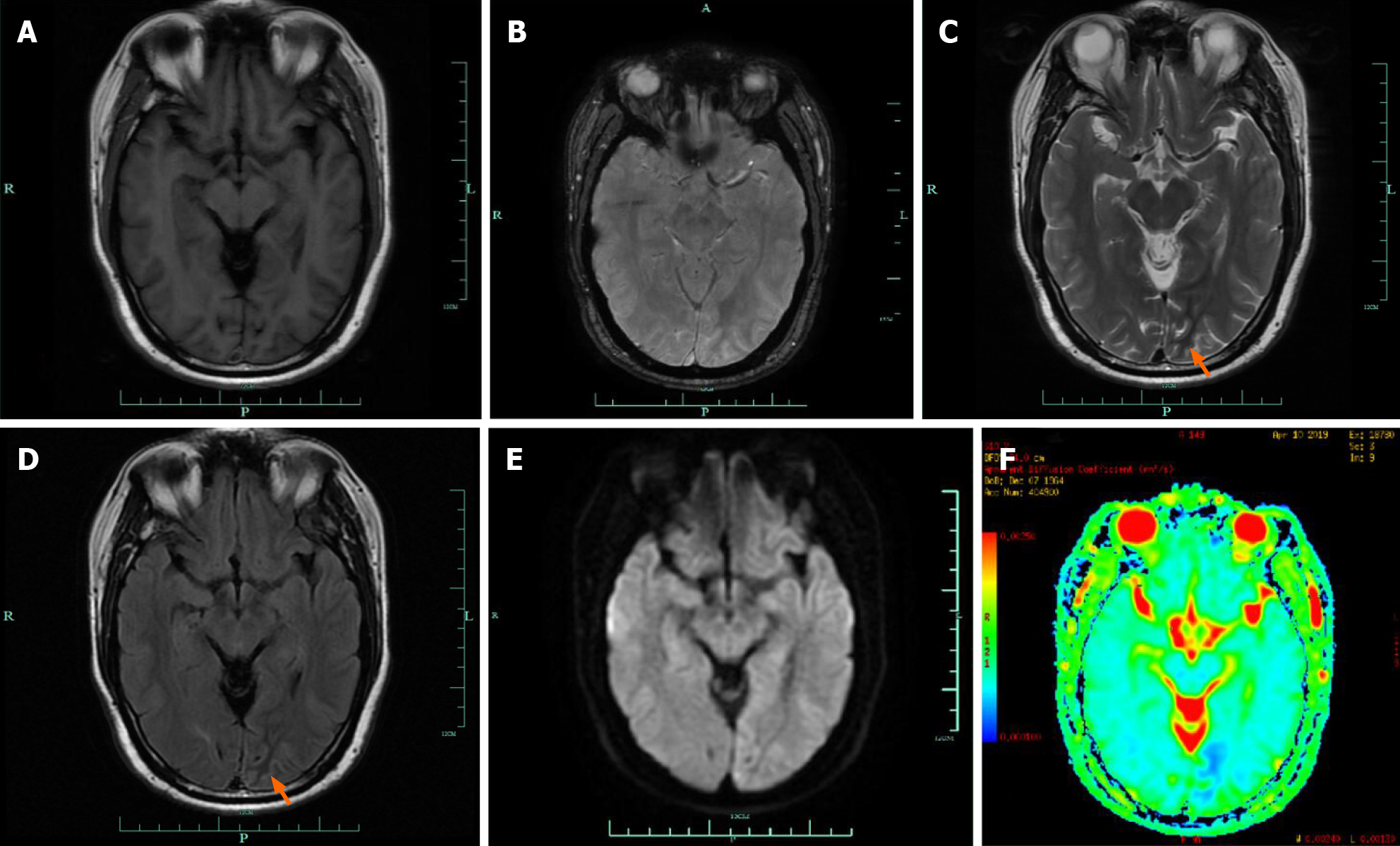 Hyperglycemic hemianopia was suspected based on the patient’s symptoms, disease course, laboratory tests and cranial MRI.

He responded to rehydration and low dose insulin without antiepileptic drugs (AEDs).

The patient remained in our hospital for two weeks, and his homonymous hemianopia was gradually relieved. The patient was discharged with tapering of the dose of insulin, which was finally replaced by dietary control.

In this study, we describe the case of a 54-year-old man with NKH combined with visual seizures and right homonymous hemianopia. Cranial MRI demonstrated abnormalities in the left occipital lobe, with decreased T2 signals in the white matter. He had good response to rehydration and a low-dose insulin regimen.

A search of the English language literature in the MEDLINE database (https://www.ncbi.nlm.nih.gov) yielded descriptions of 27 patients with NKH who satisfied the following criteria: (1) Patients had homonymous visual field defects with or without occipital epileptic seizures; and (2) Patients demonstrated neurologic symptoms that were not caused by comorbid neurologic disorders. Patients who presented with occipital seizures but no visual field defects were excluded from our review. As described in detail in our discussion, the neurologic symptoms, ophthalmologic complications and radiographic features of these patients are identical. Table 1 summarizes the clinical, laboratory, and radiographic features of all 27 patients[5,8-25] presenting with homonymous hemianopia, in addition to the data for the patient reported here.

Our patient did not have any symptoms of DM before admission. Previously known DM was reported in only 55.6% of the cohort of reviewed patients, indicating that visual field defects could be the first manifestation of hyperglycemia. Therefore, NKH should be considered as one of the causes of homonymous hemianopia, especially for patients without obvious cerebral vascular stenosis.

Our patient had homonymous hemianopia combined with typical visual seizures although his EEG was only mildly abnormal. In the 27 cases reviewed in the literature, most (85.2%) patients reported visual hallucinations, such as colored spots, flashing lights and fairly complex visions. Some patients also had concomitant focal motor seizures[13-17,20,23,24], complex partial seizures[15,25], generalized seizures[13,20,25], nystagmus[13,14,23-25], mental status changes[13,16,24], and even deep stupor[5]. Thus, although visual seizure is common in NKH patients with homonymous hemianopia, this symptom is often overlooked.

Our patient showed typical decreased T2 and FLAIR signals in the white matter, which was consistent with the findings in the 27 patients reviewed. Brain MRI scanning in 22 of these patients revealed occipital lesions in 77.3%, of which 63.6% were characterized by focal decreased T2 and FLAIR signals of the white matter. This characteristic differs from the MRI abnormalities of T2 and FLAIR hyperintensity involving gray or white matter observed in patients with status epilepticus[26]. The etiology underlying T2 and FLAIR hypointensity remains unclear. Generally, T2 hypointensity results from the paramagnetic effect of free radicals or metals, such as iron[27]. Excessive free radicals or iron accumulation within vulnerable white matter regions may have occurred in the hyperglycemic state. T2 and FLAIR hyperintensity across the cortex, gyral swelling or increased cortical thickness were also reported[13-15,20-23]. Restricted diffusion was reported in 36.4% of the cohort patients[13,19,21,23]. Most of the brain MRIs were reported to have normal non-contrast T1 images. Gadolinium-enhanced sequences were obtained in eight patients. Focal cortical contrast enhancement of the overlying cortex was observed in three patients[13,15,21], and one showed subtle gadolinium enhancement of the right hippocampus[23]. One patient showed leptomeningeal enhancement along the left parieto-occipital region[24]. The MRI images of the three remaining patients were normal with contrast[12,15,17]. Magnetic resonance angiography results in three patients demonstrated no vascular changes[12,14,17], thus reinforcing the inconsistency between the symptoms and an ischemic etiology. For most of the patients, repeated MRI showed no residual abnormalities during follow-up, with subcortical hypointensity and enhancement resolved[11,13-15,19,22-24], although a white matter volume loss was also described[15,18]. These transient changes suggest a reversible pathology.

EEGs were performed in 25 cases, and epileptiform activities were recorded in 76% of these patients. Spikes, sharp waves, spike and wave discharge, decreased voltage and slow activities originating mainly from the affected posterior brain regions were described. In addition, seizures characterized by fast activities over the occipital regions with a frequency between 15 and 16 Hz were also reported[16]. Occipital lesions appeared to be epileptogenic, consistent with visual hallucination. Among 10 patients followed up by EEG, 80% of the patients’ results returned to normal; however, attenuation of the posterior dominant rhythm was described[23]. Cerebral spinal fluid studies were carried out in 7 cases without significant abnormalities.

The main treatment for patients with hyperglycemic hemianopia is good glycemic control with insulin and rehydration. The inclusion of acute AEDs is not well established, as seizures resolved without AEDs in some cases[5,8,9,12,13,15,16,19,22]. We did not prescribe AEDs for our patient, as his visual hallucination disappeared spontaneously. However, NKH-associated seizures can be refractory and resistant to AEDs[14,17,19,23]. Reversal of neurologic symptoms probably depends on correction of the underlying hyperglycemia[23]. Phenytoin should be avoided as it can exacerbate hyperglycemia by reducing insulin secretion[4]. The prognosis of occipital seizure is good. Seizures subsided and ceased in our patient and in all 27 patients in the literature review cohort. EEG recovery was reported in most cases without requirement for long-term antiepileptic therapy. Similarly, the normal visual field returned in our patient and the majority of the cohort patients. Homonymous hemianopia lasted days to months before remission.

Patients with homonymous hemianopia usually have associated lesions of the visual pathway posterior to the optic chiasm. Some patients are simply diagnosed with cerebral vascular accidents accompanied with uncontrolled diabetes. However, the reversibility of the neurological symptoms, signs, MRI and EEG abnormalities, points to a direct relationship between hyperglycemia and the disorder. All these transient changes favor an epileptic rather than an ischemic cause. Homonymous hemianopia may actually represent a postictal phenomenon similar to Todd’s paralysis.

The pathophysiologic mechanism of homonymous hemianopia related to NKH remains controversial. Hyperglycemia sets up an osmotic gradient between the extracellular and intracellular compartments of the brain, leading to intracellular dehydration and dysfunction[5]. However, the precise relationship between osmolality and seizure is unclear. In another hypothesis, depression of the Krebs cycle, resulting in enhancement of alternative pathways of energy metabolism including conversion of γ-aminobutyric acid (GABA) to succinic acid via the succinic semialdehyde pathway (GABA shunt). The GABA shunt supplies approximately 40% of the brain energy requirements[4] and the resultant decrease in GABA precipitates seizures[10].

In this study, we propose the association of homonymous hemianopia with NKH. We identified subcortical T2 and FLAIR hypointensity rather than hyperintensity as a characteristic feature of homonymous hemianopia associated with NKH. Prompt recognition of the underlying metabolic disturbance is important so that appropriate treatment can be initiated. Aggressive glycemic control and adequate hydration are crucial, as reversal of neurologic deficits depends primarily on the correction of hyperglycemia. NKH-associated seizures may be refractory in the acute phase, although long-term use of AEDs is not required.

We are thankful to the patient who agreed to participate in this study.