A male patient visited our hospital for treatment of dizziness and headache. Magnetic resonance imaging of the brain revealed a space-occupying lesion in the right temporoparietal occipital region. Chest computed tomography and abdominal ultrasound were normal, and no space-occupying lesions were observed in other organs of the body. The patient underwent surgery and diagnosed with glioblastoma. Postoperative concurrent radiotherapy and chemotherapy were completed. During the follow-up, the tumor was found to have metastasized to the scalp and neck, and a second tumor resection was performed. Postoperative follow-up revealed extracranial metastases to multiple extracranial organs including skull, scalp, ribs, spine, liver and lung. His family members refused further treatment, and requested only symptomatic treatment such as pain relief, and the patient died of systemic multiple organ failure. Survival time from diagnosis to death was 13 mo and from extracranial metastasis to death was 6 mo.

A 47-year-old man presented with dizziness for 1 mo and headache for 1 wk without other discomfort.

The patient developed dizziness without obvious cause 1 mo ago, and was obviously dizzy and uncomfortable when squatting and suddenly standing up. The head distension and pain occurred 1 wk ago, and the symptoms persisted, but there was no relief after rest.

The patient had a history of right elbow injury caused by a car accident 20 years ago.

Denial of personal and family history.

Blood analysis revealed mild leukocytosis 12.5 × 109/L, with predominant neutrophils (80%) with normal hematocrit and platelet count. Other tests were within the normal range.

Magnetic resonance imaging (MRI) of the brain revealed a space-occupying lesion of 62 mm × 40 mm × 43 mm in the right temporoparietal occipital region. T1-weighted and T2-weighted images showed high signal. The contrast-enhanced scan showed irregular annular enhancement, and the cerebral line shifted about 0.8 cm to the left (Figure 1A). Chest computed tomography (CT) and abdominal ultrasound were normal, and no space-occupying lesions were observed in other organs of the body. 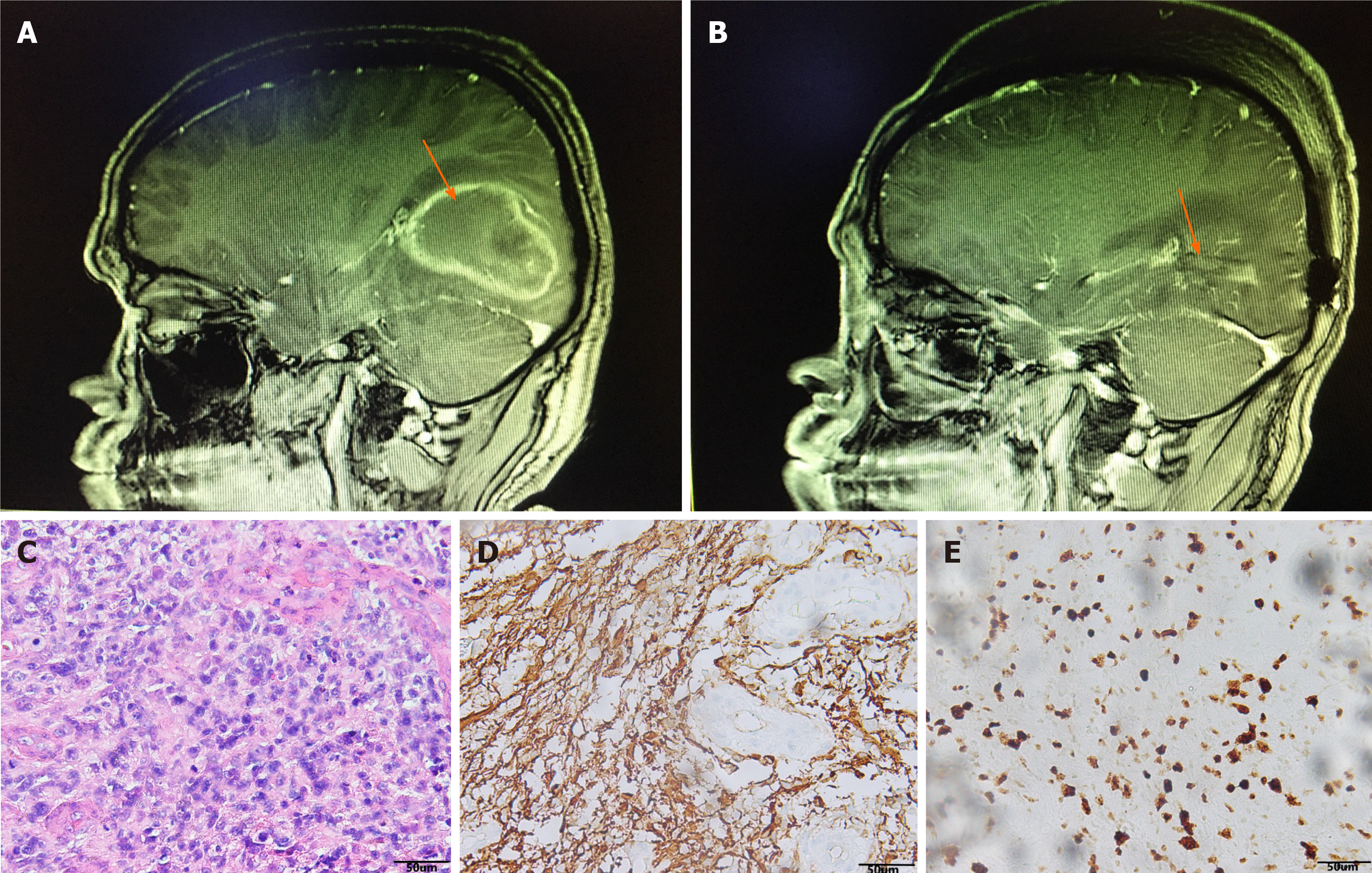 The patient was diagnosed with glioblastoma (IDH-wild type).

Postoperative concurrent chemoradiotherapy with the following regimen was administered: Radiotherapy (daily fractions of 2 Gy given 5 d/wk for 6 wk, for a total of 60 Gy) plus continuous daily temozolomide (75 mg/m2 body-surface area per day, 7 d/wk from the first to the last day of radiotherapy), followed by six cycles of adjuvant temozolomide (150-200 mg/m2 for 5 d during each 28-d cycle, and regular follow-up.

Six months after surgery, the patient had a mass at the site of surgical incision (Figure 2A), and intracranial recurrence and subcutaneous metastasis were considered in the re-examination of enhanced MRI (Figure 2B). Family members required temporary observation and simultaneous radiotherapy and chemotherapy. Nine months postoperatively, the patient was readmitted due to enlargement of the scalp incision and a new neck mass (Figure 2C). After the second admission, the patient underwent maximum lesion resection and scalp mass resection. Pathological examination of the scalp mass revealed glioblastoma, which was confirmed as extracranial metastasis (Figure 2D-F). Ultrasound indicated that the cervical mass was cervical lymph node enlargement, and we performed excision of the mass (Figure 2G). The pathological examination was consistent with glioblastoma metastasis to the cervical lymph nodes (Figure 2H). Follow-up head and chest CT showed metastases in the skull, scalp, ribs, spine, liver and lungs, and the patient died of systemic organ failure (Figure 3A-F). We suggested that the patient complete positron emission tomography/CT examination and further surgical treatment, but the patient and his family members refuse further examination and surgery, and only palliative treatment. Survival time from diagnosis to death was 13 mo and from extracranial metastasis to death was 6 mo. 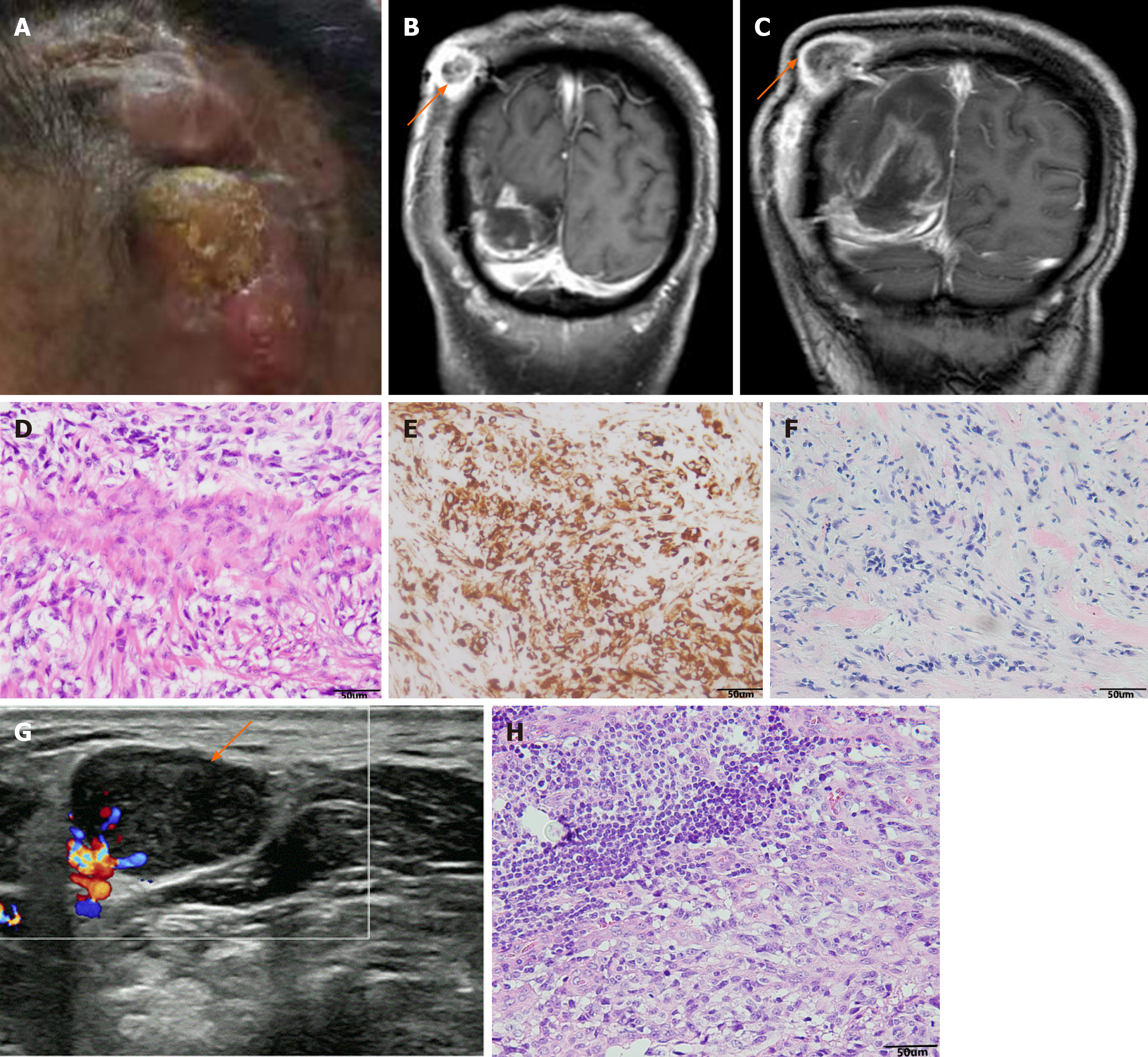 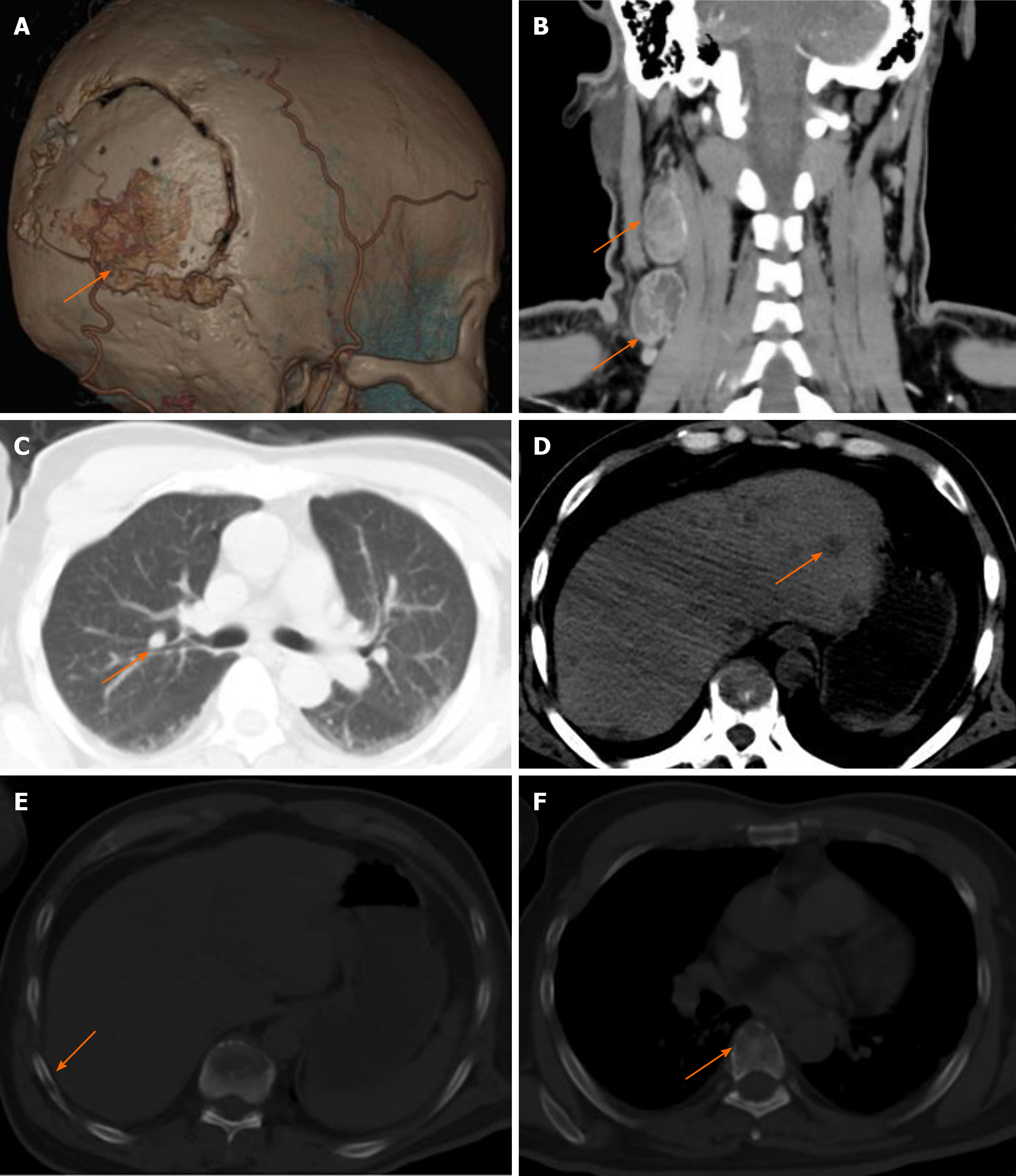 Figure 3 Follow-up after secondary surgery revealed multiple extracranial metastases. A: Three-dimensional reconstruction of the skull suggested that the skull was infiltrated by the tumor; B: Cervical computed tomography (CT) suggested enlargement of cervical lymph nodes; C-F: Chest CT showed multiple nodules in the liver (C) and lungs (D), infiltration in the ribs (E), and infiltration in the spine (F), and all the above lesions are considered for multiple extracranial metastases of intracranial glioblastoma.
DISCUSSION

Postoperative recurrence of glioblastoma is common, but metastasis is rare and extracranial multiorgan metastasis is extremely rare[1].

Weiss[2] proposed the diagnostic criteria for extraencephalic metastasis of malignant tumors in 1955: (1) The histological features of the CNS neoplasm must be demonstrated to be unitary; (2) The initial symptoms must be caused by the tumor in the clinical history; (3) A full autopsy is necessary and there is sufficient evidence to rule out the possibility of other tumors; and (4) The pathomorphology of distant metastases and CNS neoplasm must be consistent, and appropriate degrees of difference can be considered. In view of the histological features of brain glioblastoma and the histological manifestations of scalp and neck lymph nodes, the present case met the diagnostic criteria proposed by Weiss (except autopsy).

The mechanisms of glioblastoma extracranial metastasis are still not well known. Many reports of extracranial glioblastoma metastases show a strong correlation between these lesions and preceding intracranial operation such as aggressive surgical resection, biopsy, and ventriculopleural shunting, in particular, the intraoperative opening of the ventricle. Extracranial metastases have been attributed commonly to tumor cells depositing into the bloodstream or to surgical defects in the dura and skull[3]. However, Anzil[4] found that > 10% of all cases occurred in the absence of prior surgical intervention. He believed that aggressive operations are not prerequisites for extracranial metastasis of glioblastoma, also suggesting that early hematogenous spread may be a mechanism. While intracranial operations are not necessary in the development of extracranial glioblastoma metastases, such operations provide opportunities for vascular invasion and cerebrospinal fluid dissemination of tumor cells, thereby increasing the risk of systemic spread and extracranial tumor metastasis[5,6]. The most common mechanism of glioblastoma metastasis outside the CNS/neuraxis is likely vascular invasion, which indicates the existence of circulating tumor cells in the bloodstream. Therefore, the tumor-free principle becomes especially important during surgery and ensures dura mater integrity. In addition, the fraction of tumor cells in the circulation may provide an opportunity for early detection and genetic analysis of the intracranial glioblastoma[7]. In our patient, the ventricle was opened and the dura was destroyed during the operation. The opening of the ventricular system led to tumor invasion into the ventricular system, coupled with the destruction of the dura and invasion of the epidural blood vessels, leading to the systemic metastasis of multiple organs. However, beyond these factors, is there a deeper genetic connection to extracranial metastasis?

Currently, the standard initial approach for most primary glioblastomas is maximum safe surgical resection followed by postoperative concurrent radiotherapy and chemotherapy[11]. The same is true of our patient treatment regimens. In the case of extracranial metastases, there is no standard treatment; surgery, radiation and systemic chemotherapy or bevacizumab are all potential options, depending on the patient’s condition[11]. Studies have suggested a possible beneficial pairing between immunotherapy and TMZ therapy, and radiation-driven evolution may have therapeutic implications for recurrent GBM[12,13]. Moreover, Draaisma et al[14] found that MGMT promoter methylation had a prognostic effect in tumor recurrence, and the high-mutated phenotype only occurred in 6%-8% of TMZ-treated IDH WT GBMs. Therefore, for patients with extracranial multiple organ metastasis of glioblastoma, simultaneous radiotherapy and chemotherapy combined with immunotherapy is worth a try, and the study of targeted genes is a direction worthy of profound exploration.