Focal liver lesions (FLLs) are abnormal masses that are distinguishable from the surrounding liver parenchyma, solid or cystic and may be benign or malignant. They are usually detected incidentally on abdominal examinations. The classification of FLLs is very important as it directly determines the diagnosis and treatment of patients.

A 46-year-old male patient was admitted into the hospital with tarry stool, during the investigation of this issue an incidental FLL was detected. Upon further investigation of this “incidentaloma” computerized tomography and magnetic resonance imaging reached contradictory conclusions. The lesion was then further investigated using contrast-enhanced ultrasound (CEUS) with an initial diagnosis of idiopathic FLL was acquired and observation of the FLL over time need for final diagnosis, however in the follow up the FLL disappeared spontaneously.

CEUSs value for characterization of FLLs is undeniable, especially when other methods produce inconsistent results, is undeniable but with its limitations. Why and how the FLL disappeared is not known, and can be only hypothesized it was a pseudolesion.

Core Tip: This case report describes a patient with an incidentally detected focal liver lesion (FLL) in a routine computerized tomography (CT) scan preformed for an unrelated issue. After further investigation of the FLL, the CT scans gave a conclusion of hepatic hemangioma and couldn’t exclude neoplastic, while the magnetic resonance imaging scans diagnosed the lesion as small hepatocellular carcinoma, thus contrast-enhanced ultrasound (CEUS) was preformed to accurately diagnose the lesion which initially gave us a possible diagnosis of a benign idiopathic lesion, and observation over time required for a final diagnosis. In the 1, 3, 6 and 12 mo post-discharge follow up, the lesion spontaneously disappeared, and no final diagnosis was acquired as to what FLL might be. CEUS is very useful at diagnosing FLL but still has its limitations.

Due to its feasibility, low cost and ease of accessibility, ultrasound became one of the most popular imaging methods[1]. Focal liver lesions (FLLs) are often discovered incidentally due to the large number of abdominal ultrasounds performed on a daily basis[2]. Although ultrasound is a sensitive method for visualization, it still exhibits low specificity in terms of characterization[3]. Taking hepatocellular carcinoma as an example, the sensitivity ultrasound for diagnosis is only 46%[4]. Contrast-enhanced ultrasound (CEUS) can acquire real-time and dynamic imaging changes in different phases after an intravenous injection of microbubble contrast agent (MBCA). According to published studies, CEUS can be performed immediately after ultrasound and is safe with side effects being uncommon[5,6]. Compared to computerized tomography (CT) and magnetic resonance imaging (MRI), CEUS does not use ionizing radiation as with CT, and its contrast agent has no renal toxicity, making it more important in the diagnosis of various diseases.

We report a case of the so-called “incidentalomas” (incidentally discovered lesions in asymptomatic subjects). However, in this case, CT and MRI came to contradictory conclusions, so we opted for CEUS to ensure a correct diagnosis, and then the lesion disappeared spontaneously.

A 46-year-old male patient was admitted by gastroenterology department for having tarry stools in the past 5 d. A CT scan was suggested to find the source of his hematochezia during which a lesion was discovered in the liver and thus the patient was transferred to the hepatobiliary surgical department to investigate the incidentally found lesion while concurrently being treated for his hematochezia by the gastroenterology department.

The patient showed no tenderness, rebound tenderness or muscle tension on abdominal palpation. His liver and spleen were not enlarged, no vessel murmur and normal bowel sounds were found during auscultation, and superficial lymph nodes were not palpable.

Upper-abdomen CT images (Figure 1) revealed a homogeneous mass without enhancement, enhanced CT showed a hypodense lesion in the right lobe of the liver, in the arterial phase, a well-defined mass was observed in the portal venous phase, and the isodense lesion was observed in the delayed phase, the radiologists considered it was a hepatic hemangioma however couldn’t exclude neoplastic lesion, so further MRI was recommended. MRI Imaging prior to contrast enhancement: started with successive acquisition of localizer T2-weighted (3 planes), T2-weighted and diffusion-weighted images. For the contrast-enhanced scans, the system automatically issues breath-hold commands and adheres to typical delays between the different phases. After simultaneous initiation of contrast injection and imaging countdown, arterial, portal-venous and delayed phase imaging will be performed automatically with predefined pauses (15-25, 25-60 and 60-120 sec respectively). Approximately 15 min after contrast injection, the hepatobiliary phase scans including T1-weighted images (in both coronal and axial orientation) started Primovist (Bayer Healthcare) was used as contrast agent. MRI (Figure 2), the lesion displayed iso T1 and long T2 signals, with slight enhancement in the arterial phase, wash-out in portal phase, and restriction in diffusion-weighted sequences. However, radiologists concluded that it might be a small hepatocellular carcinoma and also could not rule out an atypical hemangioma, which was completely opposite to what the CT scan suggested. 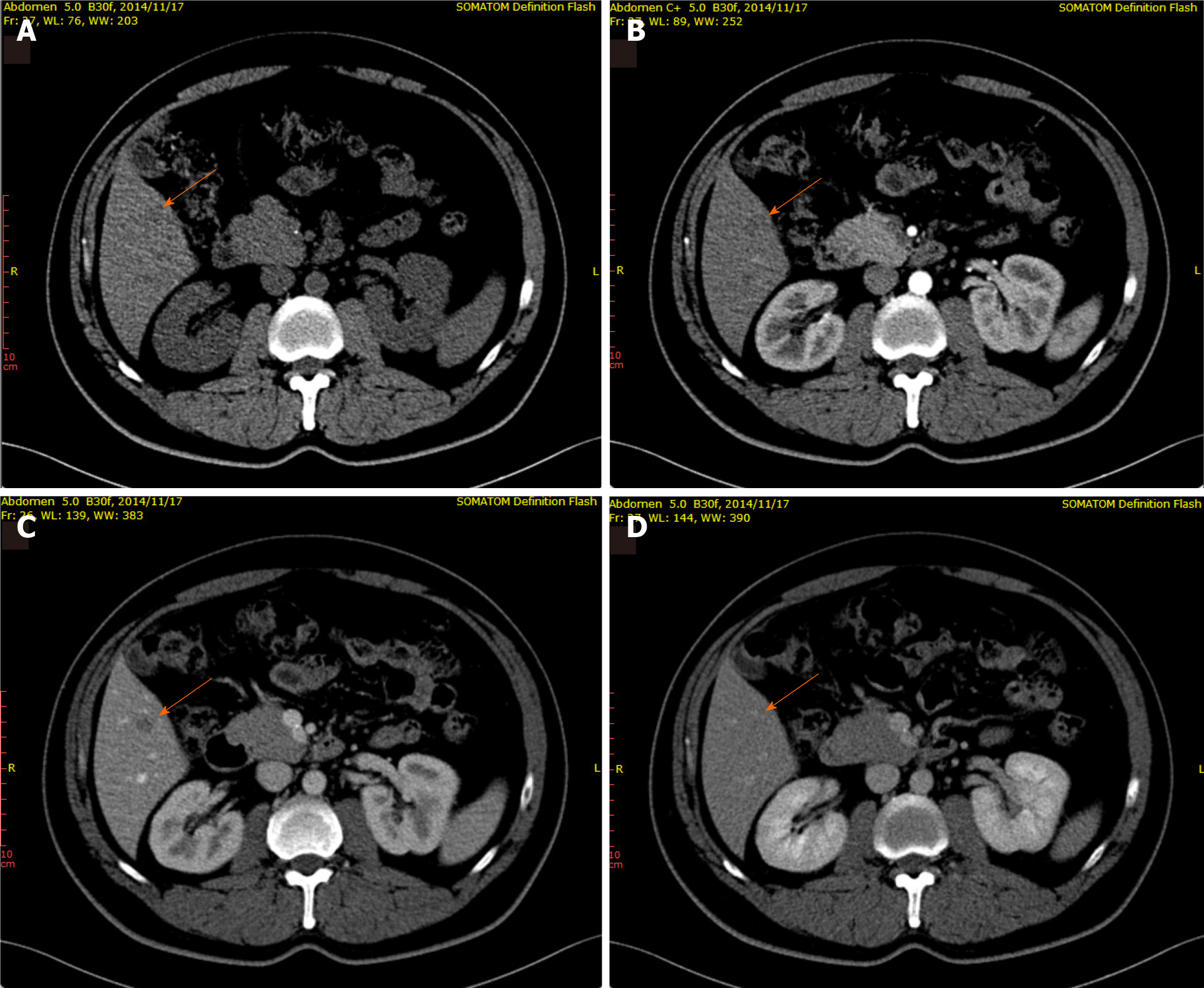 Figure 1 A 46-year-old male patient with focal liver lesions involving the right lobe of the liver. A: Routine computerized tomography (CT) scan revealed an indistinct hypodense lesion (arrow) located in segment V of the liver; B: In the arterial phase, contrast enhanced CT revealed a homogeneous mass with no enhancement (arrow); C and D: A well-defined round mass (arrow), measured about 10 mm × 9 mm, was observed in the portal venous phase (C) and the mass showed iso-density in the delayed phase (D). 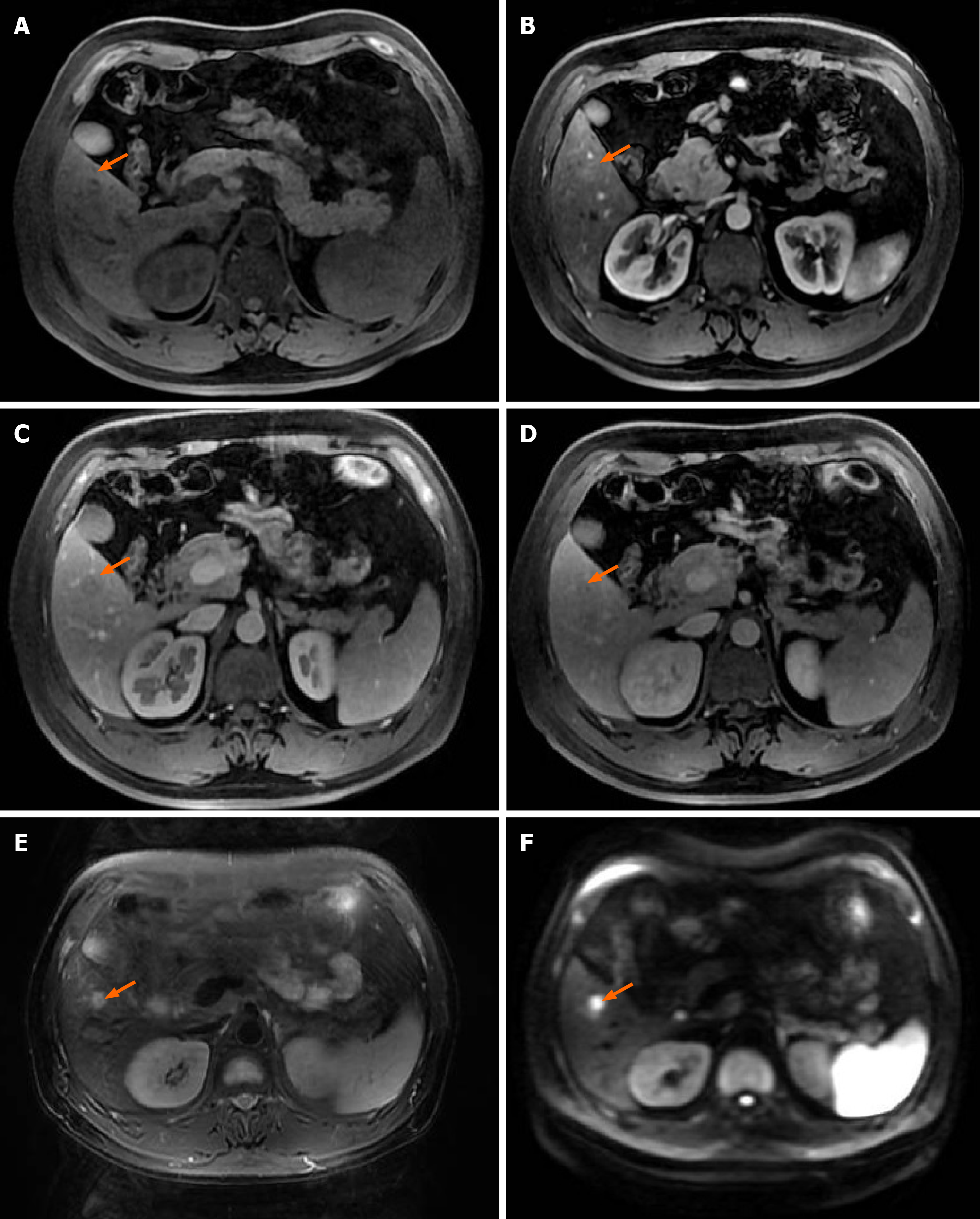 As differentiation of this lesion was important, we performed CEUS. We used B-mode ultrasound to localize the 1.1 cm × 0.8 cm hypoechoic nodule with a clear boundary in the right anterior segment of liver and then MBCA, SonoVue (Bracco, Italy), was injected subsequently to reveal more characteristics. The parameters used were as follows frame rate: 8 Hz; MI: 1.1; color gain: 54%; color scale 7.7; wall filter: 85 Hz. However, we did not see any MBCA filling during the dynamic real-time observation of arterial, portal and delayed phase (Figure 3).

Figure 3 Realtime contrast-enhanced ultrasound of the patient. The lesion identified by B-mode ultrasound and contrast agent SonoVue (Bracco, Italy) was then injected through the cubital vein with a fixed body position. However, no microbubble contrast agent filling was observed during the 5 min consecutive examination.
FINAL DIAGNOSIS

Given the above-mentioned facts, the above lesion was deemed benign and the lesion was thought initially to be an idiopathic FLL, with further observations over time required for a final diagnosis.

The lesion was be observed over time and have the patient do an outpatient follow-up at regular intervals (1-, 3-, 6- and 12-mo post-discharge) by CT scan and B mode ultrasound.

Surprisingly, at the first follow-up visit, no signs of any lesion in the previously mentioned liver segment were detected, even after a doublechecking using color duplex ultrasound, as well as in the next four follow-ups, thus leaving us with a lack of some sort of conclusive final diagnosis on specifically what type of lesion it was.

For many years, CT and MRI have been used to further assess lesions, but since the first use of MBCA in an ultrasound examination approximately 20 years ago, CEUS has become an important tool in imaging diagnosis. MBCA mainly has two main components a gas core (an air chamber making up the majority of particle volume) and a shell (a barrier between the gas and its surroundings, usually made of either proteins, lipids or polymers)[7]. MBCA is not an extra-cellular agent, this is due to the bubble size, which allows them to flow easily in the circulation as well as in the microcirculation. After injection and the intensity of the applied acoustic due to their compressibility they undergo volumetric oscillation and thus scatter much more energy thus enabling the observation of microcirculatory perfusion under ultrasound and revealing distinctive advantages in the observation of arterial phase enhancement[8]. MBCA is metabolized by the liver and the rest is excreted via respiration within 15 min, and as it shows no renal toxicity, CEUS is favorable to patients with renal insufficiency. At the same time, MBCA remains completely intravascular, so CEUS can objectively reflect the actual blood supply to the tissues under examination and allowing CEUS to provide a real-time dynamic observation instead of scheduled periods compared to the presetting scans of CT, MRI.

FLLs are often found in routine inspections, and although most FLLs are benign lesions, the priority of CEUS is to distinguish between benign and malignant lesions. CEUS distinguishes between malignant and benign FLLs by analyzing the arterial, portal-venous, and late phases[6]. A multicenter trial reported that the accuracy of CEUS for differentiating between benign and malignant FLLs is not inferior to using CT or MRI[9,10]. In a CEUS vs conventional ultrasound, a study investigated the ability of radiologists in correctly reading and differentiating lesions, the total number of correctly characterized lesions after CEUS increased from 62% to 98% for reader 1 and from 56% to 96% for reader 2[11]. In a published study, non-contrast ultrasound was shown to be correct in differentiating the lesion 87.5% of the time. After CEUS, correct differential diagnosis between benign and malignant rose to 95%[12].

CEUS is recommended for characterization of FLLs in the non-cirrhotic liver according to the WFUMB guidelines in characterization of FLL in the non-cirrhotic liver, if both CT and MRI are contraindicated[13]. And with regards to our case, CT and MRI presented us an inconclusive diagnosis. The patient also denied a history of chronic cirrhotic liver disease, and tumor markers screening did not reveal any abnormalities. Therefore, CEUS became the optimal option, considering the risk of bleeding and implantation metastasis of tumor if a biopsy was to be performed. CEUS provided a real-time dynamic display of MBCA in three continuous phases, and we did not observe any MBCA filled with hypoechoic areas throughout, thus leading us to the conclusion that the lesion is benign. However, in the first follow-up after discharge, no lesions were found in the previously aforementioned area, and here show the limitations of CEUS, as in our case it did not characterize it furtherly. It is well documented that there are malignant FLLs and pseudolesions, that mimic benign lesions, such as Cystic Liver Metastases and Metastases with Delayed Phase Enhancement[14]. Thus a definite diagnosis and classification of the lesion should be the goal. CEUS allows us to distinguish malignant lesions from benign ones. However even though in our case this was correct, further diagnostics should have been prescribed to characterize the lesion, and differentiate it from other pseudolesions.

Even though CEUS was honored as the next major technical innovation after Doppler ultrasonography, it still not without its limitations. We still do not know how or why the lesion disappeared and can only hypothesize that it was a pseudolesion. CEUS has improved the detection and classification of FLLs into benign or malignant, and we can conclude that at least it is suitable for immediate assessment of FLLs found incidentally, especially in inconclusive cases, such as ours, but a more comprehensive means of diagnosis is a must and should be always performed, as diagnosis of the FLL is very crucial to the patient’s outcome, and adding CEUS to our arsenal of diagnostic mediums is a welcome thought.

The authors thank the Department of Radiology of Second Affiliated Hospital of Chongqing Medical University for offering the images of computerized tomography, magnetic resonance imaging and contrast-enhanced ultrasound.