Most intrahepatic arterioportal fistulae (IAPF) are acquired. The few cases of congenital fistulae are diagnosed in infants and children.

We report a 31-year-old female patient presenting with haematemesis and melena three weeks after delivering her second child. The patient had a 20-year history of abdominal distention and nausea. IAPF, along with splenomegaly and ascites, was found by Doppler sonography and confirmed by computed tomography angiography. The patient was treated with endovascular coil embolization, resulting in occlusion of the fistula.

This was an unusual case of possible congenital IAPF that manifested during a second pregnancy and was complicated by portal hypertension.

Core Tip: Our study describes an unusual case of possible congenital intrahepatic arterioportal fistula that manifested during a second pregnancy and was complicated by portal hypertension. Coil embolization of the fistula provides a less invasive and effective therapeutic option in this case. Only 35 cases of congenital intrahepatic arterioportal fistula were reported until 2015, and no case in the peripartum setting was described.

Intrahepatic fistulae are categorized as arteriovenous, arterioportal and portosystemic. These three types of fistulae represent anomalous communications between the hepatic artery, portal vein and hepatic vein. Arterioportal fistulae can be intrahepatic (IAPF) and extrahepatic (EAPF). Optimal management of these fistulae has not been established due to the rarity of the anomalies[1-4].

IAPF was first reported by Gryboski et al[5] in 1967, but its aetiology remains unclear. Most IAPFs are acquired; fewer than 10% of cases are congenital, and they are diagnosed mostly in infants and children[6].

Interventional radiology has a key role in the treatment of congenital arterioportal fistulae (APF)[12]. Congenital and acquired APFs require coil embolization or surgical intervention that involves hepatic artery ligation[13,14]. The treatment of APF has shifted from surgical ligation or hepatic resection to an endovascular-first approach[15].

Currently, the treatment of choice for most arterioportal fistulae is trans-arterial coil embolization. Symptomatic IAPFs and EAPFs can be occluded using steel coils, micro-coils, polyvinyl alcohol and/or microspheres, and detachable balloons[13,14]. Embolization of APF is technically feasible and effective and can be considered the first-choice therapy in selected patients[16]. The curative embolization of congenital IAPF is usually achieved in unilobar lesions[13,17,18]. For management of bilobar or complex lesions, a combination of embolization and surgery or a primary surgical approach is preferred[19-21].

A 31-year-old woman was referred to our clinic from a district hospital after two episodes of haematemesis and melena requiring transfusions.

There was no history of trauma, iatrogenic causes or tumour. A month prior, the patient had experienced the first episode of gastrointestinal bleeding during the 38th wk of her second pregnancy. After 7 d of conservative therapy (i/v fluids and observation), a caesarean section was performed without any complications.

Of interest, the patient reported a history of periodical abdominal distention since she was 10 years old and nausea since she was 20 years old. An abdominal ultrasound two years prior had revealed hepatomegaly and splenomegaly.

Personal and family history was unremarkable.

The physical examination on admission revealed abdominal distension. The patient’s pulse rate was 110 beats/min, and the blood pressure was 90/60 mmHg.

Laboratory results are shown in Table 1. There was no encephalopathy detected. Viral and autoimmune hepatitis markers were negative.

As seen on Doppler ultrasound, arterial inflow to the fistula occurred via a hypertrophied right hepatic artery draining into a dilated venous varix of the right branch of the portal vein. The portal vein showed arterialization with reversal of flow. There was associated splenomegaly detected. Approximately 4000 mL of free fluid was detected in the abdomen.

Computed tomography (CT) angiography confirmed the ultrasound findings, showing a round irregular vascular malformation with a size of 28.0 mm × 27.1 mm × 22.4 mm in segment 5 of the liver above the gallbladder with a shunt between the right hepatic artery and right portal vein (Figure 1A). The right hepatic artery near the vascular malformation was 11.8 mm (normal 3-5 mm), the right portal vein was 23.6 mm (normal 4-6 mm) and the fistula was 12 mm in diameter. Upper gastrointestinal endoscopy showed multiple large oesophageal varices as the cause of bleeding. 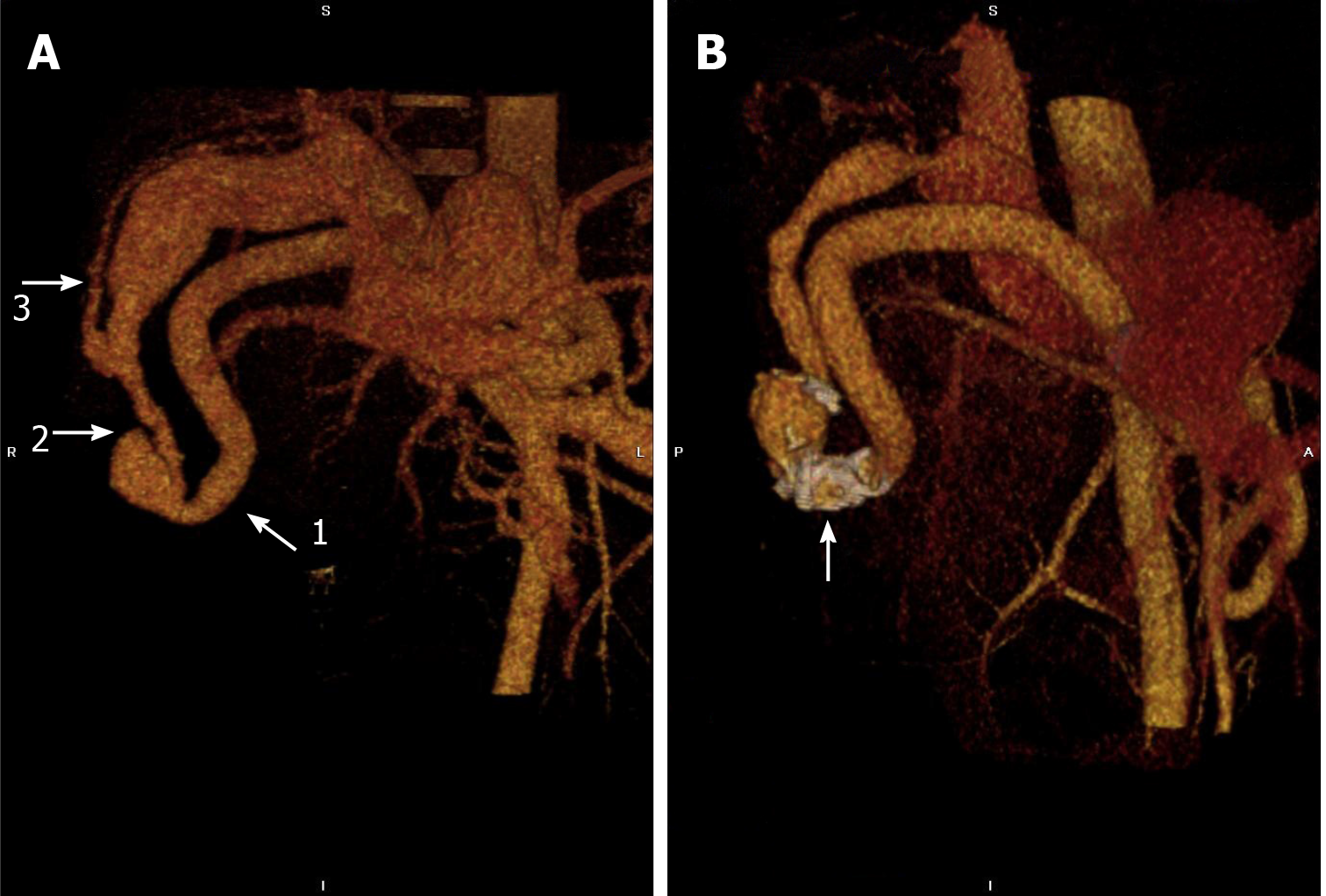 Endoscopic band ligation of oesophageal varices was performed. There was no bleeding after the procedure.

On the 11th day of hospitalization, the ascites became severe, and the abdominal cavity was drained with a 10-Fr pigtail catheter. On the 12th day of hospitalization, endovascular coil embolization of the arterioportal fistula was performed under local anaesthesia and mild intravenous sedation through the right femoral artery route using a 5F Cobra catheter (Terumo Corporation, Tokyo, Japan). Images were obtained of the celiac arteries, and further images were obtained of the right hepatic artery. The right hepatic artery was dilated, with the widest dilation of 12.2 mm. Continuation showed aneurysmal dilatation. The fistulous connection was 12 mm in diameter (Figure 2A). The decision was made to close the distal segments of the right hepatic artery by embolization with metallic coils (MRAY Cook medical, Bloomington, IN, United States), two coils of size 12-3 and six coils of size 8-5 (Figure 2B).

Following placement of coils, the flow gradually decreased. With stable vitals and an alert state of consciousness, the patient was transferred to the intensive care unit (ICU). The embolization procedure was completed without complications.

The postoperative outcome of the patient was excellent. At 1 mo of follow-up, the patient had no signs of portal hypertension or malabsorption. Compared to before the procedure, follow-up CT angiography 2 years later revealed significantly less blood flow from the hepatic artery towards the portal system and a reduction in the size of the liver and spleen. Along with a reduction in the size of the right hepatic artery (9.5 mm), fistula (5.8 mm) and right portal vein (11.1 mm), no migration of the coil was noted (Figure 1B).

In 2015, only 35 cases of congenital IAPF were reported, and no case in the peripartum setting was described Zhang et al[11] (2015) presented 4 cases (65-year-old female, 33-year-old female, 74-year-old male, and 43-year-old male patients) of congenital IAPF. There was no history of trauma or liver disease. The clinical manifestations were haemorrhage from oesophageal varices in two cases, ascites in one case and encephalopathy in one case. In all cases, endovascular embolization was performed[11].

Patients with IAPF may be asymptomatic or present with haemobilia, portal hypertension, or mesenteric steal syndrome[15]. Our patient did not have a history of abdominal trauma or any previous procedures related to the abdominal cavity. The present case was considered to be congenital because of its symptomatic presentation in childhood (periodical abdominal distention and nausea) and lack of any secondary factors. While the patient had preserved synthetic function, the worsening of her condition was related to portal hypertension and bleeding from oesophageal varices during the 38th week of her second pregnancy.

Ward et al[15] (2015) described a case of extrahepatic arterioportal fistula in a 40-year-old woman with a history of multiple pregnancies and no previous trauma. The fistula was formed between the left hepatic artery off the left gastric artery and the left portal vein. Endovascular embolization was performed with Amplatzer vascular plugs I. APF formation after visceral artery aneurysm rupture, often in the setting of pregnancy, is an alternative precipitating event and possibly the aetiology in this patient.

The present case is rare because clinical manifestations of portal hypertension started at the end of the second pregnancy. We could not identify cases in the literature describing the manifestation of IAPF during pregnancy.

Non-invasive examinations such as ultrasonography (US), colour Doppler US, CT or magnetic resonance imaging (MRI) are helpful in these cases. Catheter angiography is the confirmative diagnostic method for arterioportal fistulae[7]. In our case, Doppler US, CT angiography and catheter angiography were performed before the procedure, and the type, site and size of the arterioportal fistula were detected. As bleeding from oesophageal varices is life-threatening, endoscopic ligation and haemostasis play an important role in the treatment.

The treatment of IAPF includes percutaneous trans-arterial embolization, implicated-hepatic artery surgical ligation, partial hepatectomy and liver transplantation. Interventional radiological treatment is considered the preferred procedure[11]. Overall, slightly more than half of the cases of IAPFs are unilobar lesions. In this setting, curative embolization of intrahepatic arterioportal fistula is usually performed[12,13,24].

There is a wide range of embolic agents and devices available, including ethanol, Gelfoam, steel coils, detachable balloons, a combination of micro-coils and N-butyl 2-cyanoacrylate (NBCA), Amplatzer vascular plugs I, and a combination of Guglielmi detachable coils with NBCA injection[11,15].

In the present case, a single fistula between the right hepatic artery and the right portal vein was discovered. This finding allowed for successful treatment with coil embolization. Post-embolization angiogram showed occlusion of the arteriovenous fistula. In this report, we emphasize fistulae management and endovascular treatment. Embolization provides a less invasive and effective therapeutic option in this case.

IAPF is a rare but treatable cause of portal hypertension, and it may cause gastrointestinal bleeding and ascites. Embolization of IAPF is technically feasible and effective and can be considered the first-choice treatment in selected patients. This case highlights an unusual cause of IAPF that manifested during a second pregnancy and was complicated by portal hypertension.

The authors wish to extend their acknowledgements to Dr. Poghosyan A who performed the ultrasound and Doppler assessment of the patient, and to Dr. Shekherdimian S, MD (UCLA Mattel Children’s Hospital, Los Angeles, United States) for reviewing this paper and giving valuable input.