Research Domain of This Article
Rehabilitation

Electromagnetic interference (EMI), means disturbance to the operation of implanted electrical devices caused by external sources. If cardiac pacemaker is implanted into the body, the risk of EMI should be considered when performing neuromuscular electrical stimulation (NMES). So far, no case has been reported that clinical magnets are used to safely manage the EMI risk of patients with cardiac pacemaker in NMES.

A 72-year-old male with swallowing disorder due to pure motor lacunar syndrome was transferred to rehabilitation department six days after the symptom onset. EMI risk needed be considered when implementing NMES on pharyngeal muscles, since cardiac pacemaker was implanted on his left chest due to the sick sinus syndrome. In the first NMES, the function of the pacemaker was directly monitored using telemetric instruments. From the second day, by a simple method of placing a magnet on the pacemaker, we chose to move the pacemaker into a mode that the device was not influenced by external stimulus. This magnet method has been used repeatedly for a year for the safe NMES treatment. We could remove Levin tube four months after the initial symptom and dysphagia related symptoms had not been noted during two-year follow-up period.

This report is the first case of dysphagia rehabilitation that EMI risk was handled using mode change of pacemaker with magnet. This method is unfamiliar to doctors, but safe and easy approach. This paper could be guidance for clinicians who need to treat patients with EMI risk.

Core Tip: Electromagnetic interference (EMI), means disturbance generated by external source to implanted devices’ function. It should be considered when conducting neuromuscular electrical stimulation to patient with cardiac pacemaker. In this paper, we reported that mode change using magnet allowed us to safely perform dysphagia rehabilitation and manage EMI risk in stroke patient with cardiac pacemaker. This approach is unfamiliar to physicians, but we hope that this paper could be guidance for clinicians who need to treat patients with risk above.

It has been known that the cardiac pacemaker’s mode can be changed using magnets for EMI management, but clinicians were unaccustomed to use this information and relevant case papers about patients with dysphagia have never been reported. Therefore, this is the first case report using magnets to reduce EMI risk when applying neuromuscular electrical stimulation (NMES) to dysphagic stroke patient with cardiac pacemaker. This report aimed to introduce the case and provide guidance on the use of clinical magnets to manage EMI risk of cardiac pacemaker. This study was approved by the Hanyang University Medical Center Institutional Review Board (No. HYUH 2021-03-007).

A 72-year-old male visited emergency department with chief complaint of dysphagia. Levin tube was applied for diet on admission day and he transferred to rehabilitation department on 6th hospital day.

The patient had no clinical presentation. 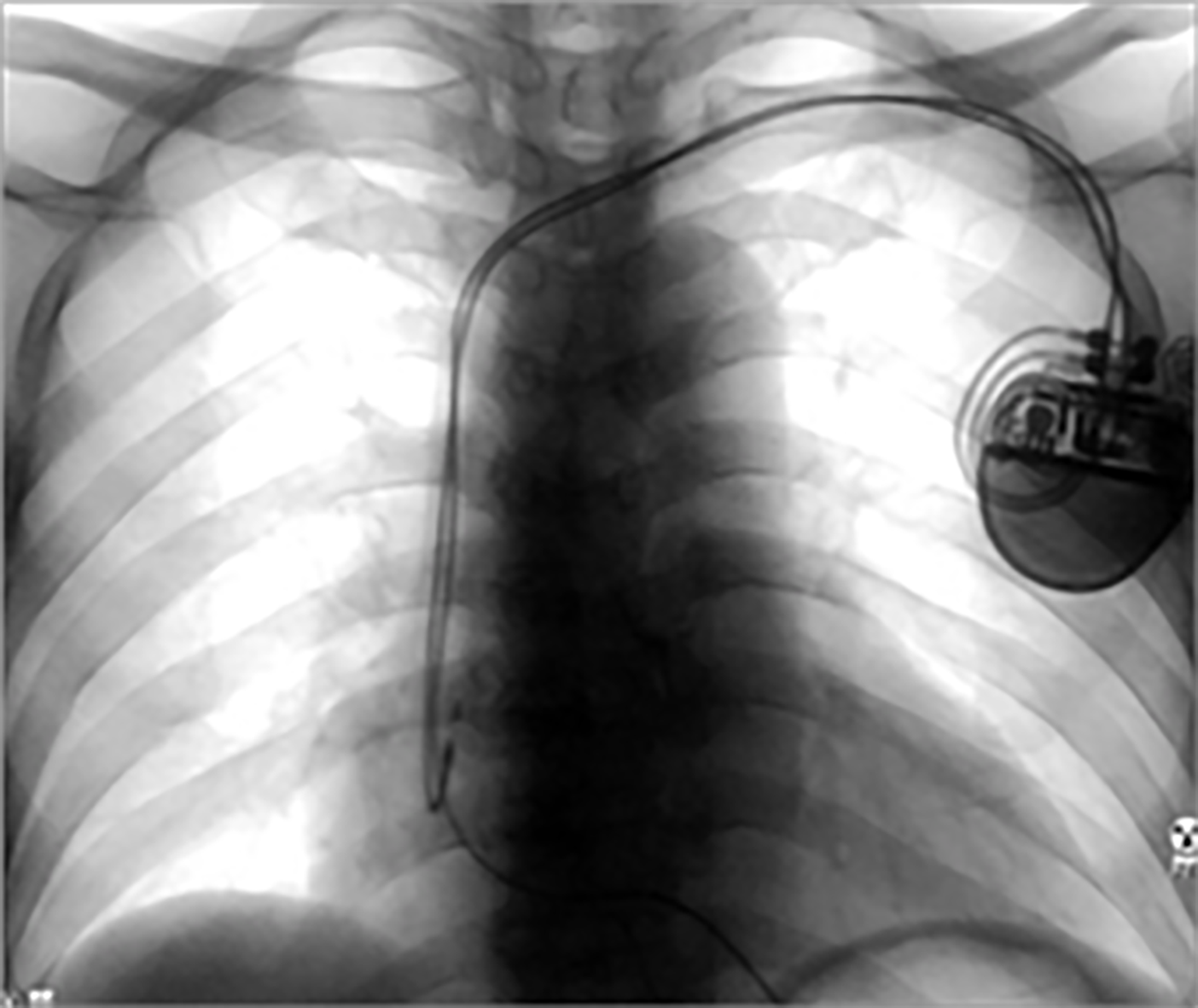 The patient had no specific personal and family history.

Medical Research Council scale of left upper and lower extremity was grossly four grade. He did not complain of sensory symptom. Cranial nerve and cerebellar functions were intact.

Serum C-reactive protein level was 7.2 mg/dL on 7th hospital day and mild cough and sputum was accompanied, but lab data and symptoms were getting better without antibiotics administration.

His brain computed tomography showed no abnormal findings. And there was no focal lesion for the symptoms on brain diffusion weighted image without multifocal T2 high signal intensities at bilateral periventricular white matter.

The final diagnosis of the presented case is a pure motor lacunar syndrome based on clinical symptoms.

Rehabilitation program after transferring to rehabilitation department was consisted of occupational therapy, activity of daily living training for patient’s left upper extremity weakness and gait training for left lower extremities weakness. Oromotor facilitation technique for dysphagia was also started after first videofluoroscopic swallowing study (VFSS) (Figure 2). We also intended to do NMES of pharyngeal muscle for dysphasia, but it was needed to delay considering EMI to cardiac pacemaker in his chest. 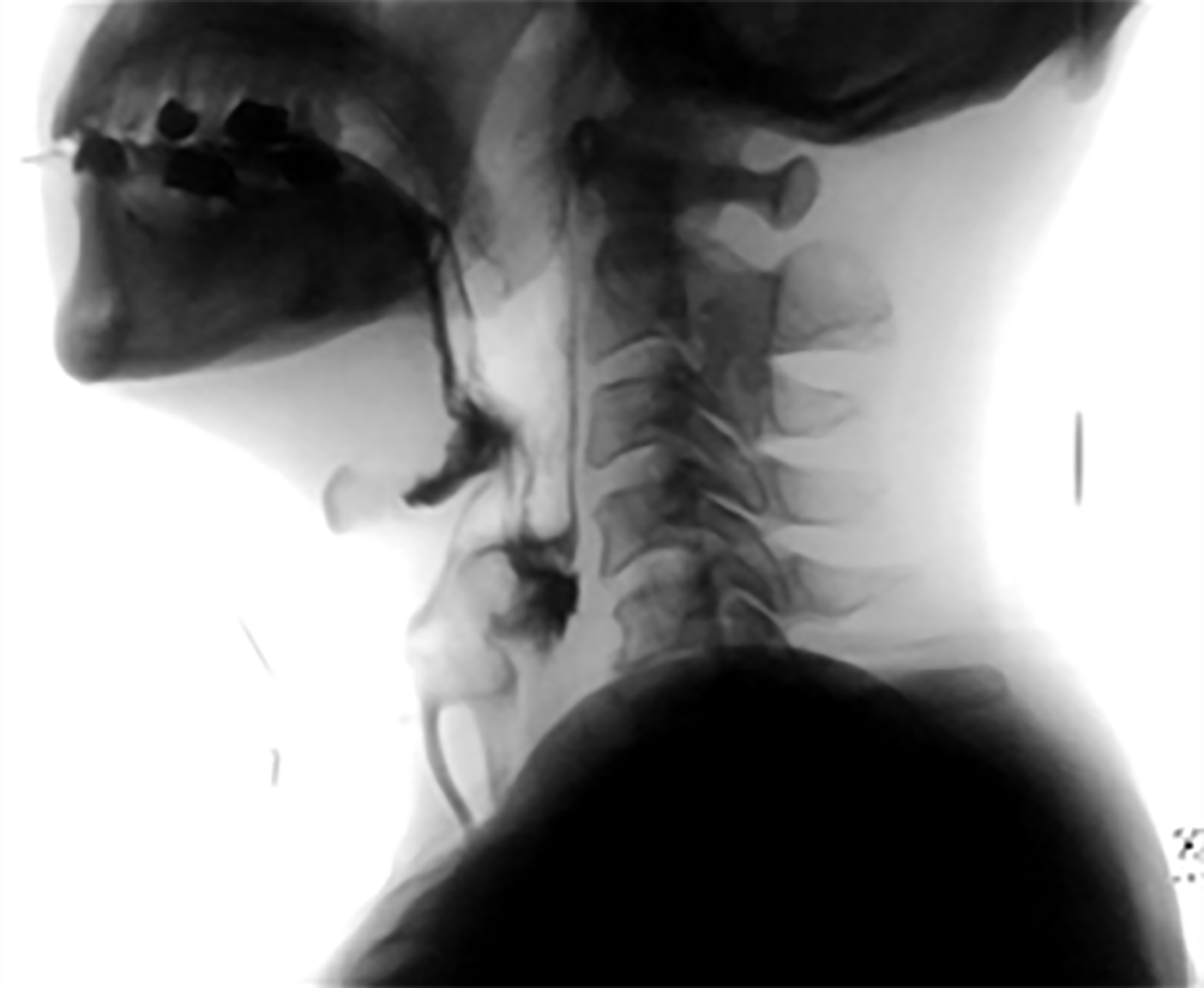 We contacted cardiology department and pacemaker manufacturer, and discussed about the plan for the treatment. After explaining treatment process and possible complications to the patient and obtaining the written consent from the patient on 13th hospital day, first NMES was carried out for 30 min after the technician from the company changed pacemaker’s mode using telemetric devices, so that EMI did not interfere with the device function. The first treatment session was performed with in-situ monitoring of cardiologist to manage the possible emergency situation. NMES device was Vitalstim™ (DJO LLC, United States) and current intensity was set 7.0 mA.

We could not find any problems due to treatment on the patient and decided to maintain NMES for this patient with careful monitoring. However, this approach was difficult to sustain in terms of time and cost and required a great deal of effort from many people. Therefore, from the next day, we taped magnet on the pacemaker to change pacemaker mode to fixed asynchronous mode (Figure 3). Until his discharge on 37th hospital day, NMES therapy was applied daily with magnet mode change under attendance of doctor. Electrocardiogram was checked after every NMES session. 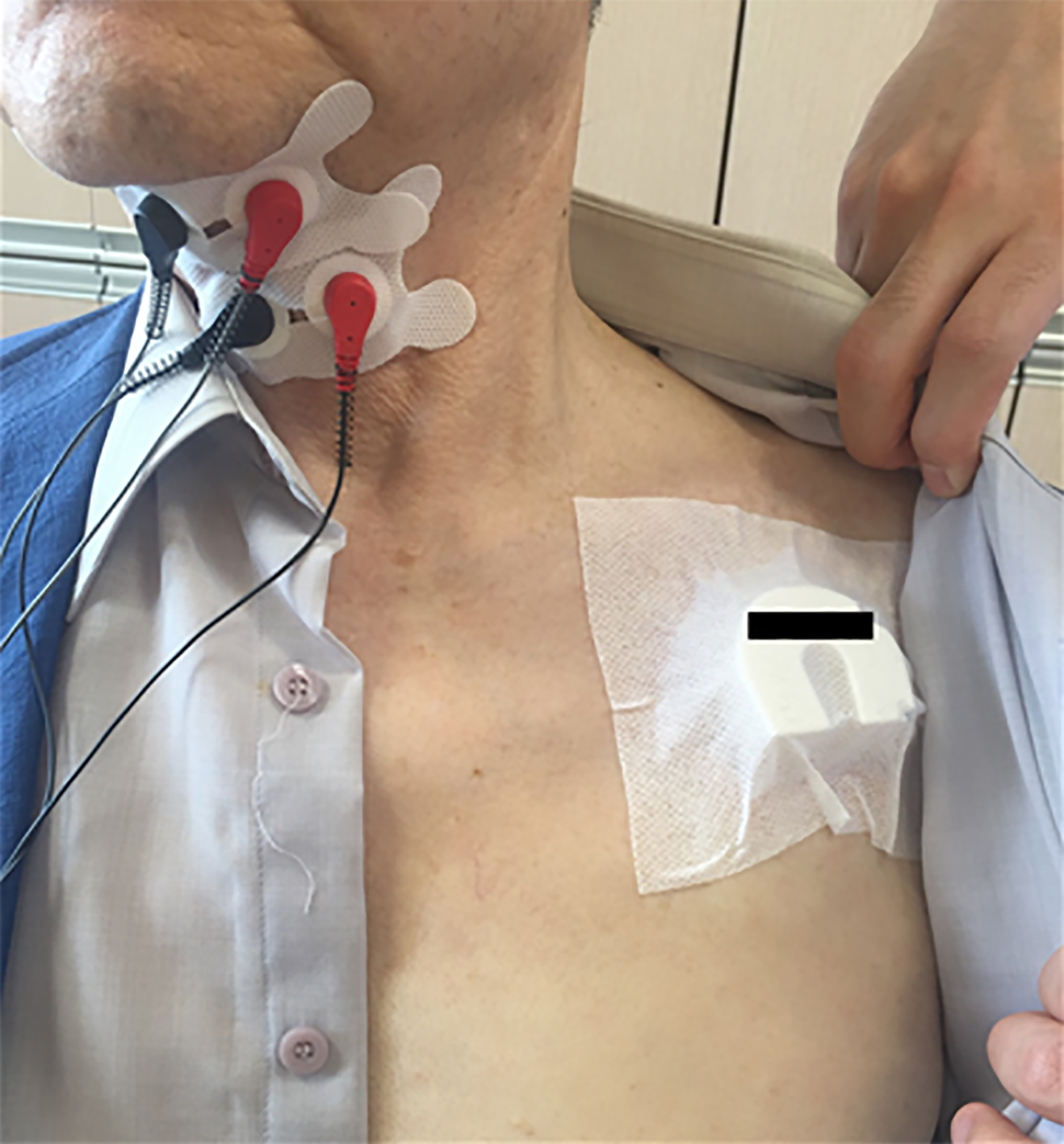 After discharge, the patient visited outpatient clinic five times per a week and get NMES with magnet mode change for 30 min in each visit. All the follow up VFSS results are in Table 1. Levin tube was removed and oral feeding was restarted with soft food by with reference to the result of the 4th VFSS conducted 105 d after the first symptom. Little amount of aspiration of thin liquid, thick liquid, pudding and soft food was seen and dysarthria was not observed at this exam. The 5th VFSS implemented 165 d after the onset showed mild penetration only without any sign of aspiration of thin liquid, pudding and solid food. Frequency of treatment was reduced to twice a week after this test. Only mild penetration of thin and thick liquid was observed in the 6th VFSS conducted 270 d after the onset, so that the patient was guided to visit the hospital once a week to take NMES treatment. Three months later, the 7th VFSS showed the same result, and NMES was stopped. Since then, he visited the hospital every six months. During the two-year follow-up period, the patient lived without any dysphagia related symptoms.

In this case, we altered the pacemaker mode and monitor its function with manufacturer’s device in the first NMES session. But, this is time-consuming process which may delay treatment timing, and always needed trained technicians. For this reason, we decided to use magnets to manage EMI risk from the second treatment session. Historically, magnets were used to check remaining battery life and to induce pacemaker to asynchronous mode when EMI was suspected[6]. Those are now available using telemetric communication devices with technical progress; however, still most pacemakers have a switch in the circuit that respond to magnets[1,6].

In the model that the patient were using, clinical magnet alters pacemaker mode DDD to DOO. This asynchronous mode maintains fixed pace making with 100ms AV delay and ignores inappropriate interference of electrical devices and currents. After the treatment, removal of magnet simply reverts its action to preprogramed state[7]. There was no cardiac symptom of this patient in every treatment session.

There are limited papers about interference between NMES to pharyngeal muscles and cardiac pacemaker; however, we can find some articles about applying transcutaneous electrical nerve stimulation (TENS) to patients with pacemaker or ICD. American heart association (AHA) mentioned that TENS, which uses similar devices with Vitalstim™, has low risk and rarely inhibits device pacing. However, AHA recommended not to use TENS on the torso if pacemaker or ICD is implanted[2]. Some researchers reported that TENS caused dysfunction of pacemaker when holter monitoring was analyzed which could not be noticed by electrocardiogram[8]. Food and Drug Administration stated that implanted electrical devices are contraindication for use of powered muscle stimulators, but not Vitalstim™ therapy due to its low use of current, but still needs caution. Vitalstim™ manufacturer recommends that clinicians should proceed with caution and monitor any signs of possible interference, even though likelihood of EMI is small[9].

Magnetic mode was available since early models of pacemaker were developed, but its use is very limited. Only limited paper mentioned that magnet could be used to reduce EMI risk[1], and there were no articles stated that magnet could be applied to NMES of pharyngeal muscles. In reality, the use of magnet in hospital for EMI is rare probably due to doctor’s unfamiliarity. For this reason, this first case report, NMES to dysphagic patient with magnet mode change of pacemaker, can be a guidance to make a plan for patients under the risk of EMI in various conditions.

There are some implications about EMI and pacemaker magnet mode issue. First, clinicians should check pacemaker device’s brand and its setting before magnet application. When magnetic field is detected, pacemaker devices change its mode as preprogrammed, and all of these settings are different from its manufacturers and technicians’ choice. For example, the pacemaker made by Boston scientific that case patient used have three magnetic mode; “Off” (magnet has no effect), “Store Electrogram”, and “Pace Async” (nominal setting); however, different models have different modes[7]. In addition, since each manufacturer produces magnets suitable for their own pacemakers and guides how to use them though websites, it is important to check this contents before using magnet. Second, we recommend using telemetric devices for mode change at least at the first NMES session for dysphagia treatment. So that clinicians can check its previous mode and monitor patient’s symptoms and responses under altered mode. Third, even though magnet can be applied in various EMI risk conditions including NMES treatment, we need to be aware that there are situations that magnets are difficult to apply, and that unexpected and dangerous situations can occur. For instance, magnet position might be unstable in non-supine surgeries[1]. There was also reported case about unexpected asystole occurred while using magnets to switch pacemaker modes during surgical operation[10]. Therefore, clinicians can effectively and safely use clinical magnets when carefully monitoring the condition of patients for unforeseen situations. Fourth, further studies and cases are necessary to broaden magnet application in various situations where EMI is expected. In particular, case reports about occurred EMI are frequently made, but there are no reports on how to preventively manage risk of EMI. Although it is stable and safe method to lower unexpected risk, there are scarce papers about magnet use under the possible EMI. When pacemaker or ICD is in the body, in case of NMES, nerve conduction study, or electrocautery which requires electrical stimulation or repetitive transcranial magnetic stimulation (rTMS) which makes change of magnetic field, magnet approach can be useful to minimize EMI risk. More cases and research papers should be accumulated to better understand the advantages and weaknesses of using clinical magnets.

This is the first reported case that mode change of pacemaker with magnet was utilized for safe NMES and dysphagia rehabilitation. This approach is unfamiliar to physicians, but it should be considered for safe treatment of patient with EMI risk. Further investigation regarding appropriate protocols for clinical magnet use is needed.