We report the case of a 76-year-old female patient with extensive extrauterine and abdominal neoplastic lesions. Computed tomography showed massive pleural and ascitic fluid, and there was an increase in serum cancer antigen 125. She underwent bilateral adnexectomy and tumor resection. The right ovary had been replaced by a multinodular mass that was 8.5 cm × 4.5 cm × 3.5 cm in size. In addition, there was a 24 cm × 15 cm × 13 cm mesenteric mass, which was also multinodular, with local invasion of the intestinal serosa and underlying muscle. Under the microscope, the tumors in different places exhibited two different patterns, thus presenting great challenges to diagnosis and treatment. Thorough pathological assessment eliminated all differential diagnoses in favor of metastatic LGESS derived from a 20-year-old primary tumor initially misdiagnosed as leiomyosarcoma.

LGESS morphology varies according to tumor location. Accurate diagnosis is critical for appropriate treatment and improved prognosis and patient care.

Core Tip: Low-grade endometrial stromal sarcoma (LGESS) could have a morphological variation of extrauterine tumors. These variations include smooth muscle differentiation, fibroma-like stromal pattern, and glandular differentiation. Misdiagnosis is common and may impact patient outcomes because of differences in the treatment approach for LGESS compared to that of other tumor types. Greater knowledge of LGESS morphological variability is critical in establishing a clear diagnosis and guiding patient care.

Low-grade endometrial stromal sarcoma (LGESS) is rare, accounting for only 1% of all malignant uterine tumors and 10% of uterine sarcomas[1-3]. The tumor is persistent and may metastasize years after initial resection[4,5]. Classically, LGESS exhibits a proliferative morphology. However, metastases may present with variable forms of differentiation including smooth muscle differentiation, fibroma-like stromal pattern, glandular differentiation, sex cord differentiation, or prominent myxoid change within the tumor[6-8]. Thus, the range of differential diagnoses is wide and includes both benign and malignant tumors. LGESS with fibroblastic features and extensive metastasis has rarely been reported. To the best of our knowledge, our case is the first to describe metastatic LGESS with variable morphologies occurring in both ovaries and the mesentery.

A 76-year-old female patient presented to our hospital with abdominal distension and a chief complaint of constipation.

The patient’s constipation had lasted for two months, and it was worse after eating. There was no vaginal bleeding, fluid production, or obvious increase in the frequency of urination.

Upon presentation, review of the patient’s medical history revealed a vaginal hysterectomy 20 years prior in response to a mass that was then diagnosed as leiomyomasarcoma.

She denied any family history.

The patient was observed to be short of breath with nominal exercise. The shape of her chest was generally normal. Breath sounds from the right lung were reduced, while those from the left were normal. She had abdominal distention and a palpably large mass, the upper edge of which reached two transverse fingers above the umbilicus. Vulva and vagina revealed no obvious abnormalities.

Laboratory findings measured the levels of the tumor marker cancer antigen 125 at 420.3 U/mL. No tumor cells were found in the pleural or ascitic fluids.

Computed tomography (CT) of the abdomen and pelvic area revealed a large, cystic, and solid mass with unclear bilateral attachments (Figure 1A). After assessment by gynecologists, the mass was suspected to be a malignant tumor originating from the appendix that had undergone peritoneal metastasis. Multiple small cysts were identified in the liver accompanied by evident ascites (Figure 1B), and another small cyst was found in the left kidney. Chest CT revealed a massive right pleural effusion.

After evaluation, clinicians decided to proceed with surgery. Gynecologists and general surgeons participated in the operation. Intraoperative exploration uncovered bilateral ovarian, mesenteric, and abdominal wall tumors. The right ovary had been replaced by a multinodular mass that was 8.5 cm × 4.5 cm × 3.5 cm in size. The cut surface was grayish and powdery, and some areas were slightly fragile, while others were solid. The tumor had grown as a sheet containing thick collagen fibers; some areas were edematous, and some areas were densely packed. The 24 cm × 15 cm × 13 cm mesenteric mass was also multinodular with local invasion of the intestinal serosa and underlying muscle. The cut surface was yellowish-gray, powdery, and solid. The mass showed signs of edema and degeneration.

Resected samples from the ovarian and mesenteric tumors were sent for frozen section biopsy. Cells from the bilateral ovarian lesions were oval-shaped or short and spindle-shaped; the cells were slightly atypical, but any mitotic figures were unobvious. In some areas, capillary involvement was evident (Figure 2A and B). In contrast, cells of the mesenteric tumor had grown in sheets, bundles, or fishbone-like arrangements. The cells were oval-shaped or short and fusiform. Nuclear atypia was unapparent, and mitotic figures were clearly visible (10-20 cells/10 high-power fields). Tumor involvement in the intestinal smooth muscle was evident, and regions of flaky necrosis were observed (Figure 2C and D). 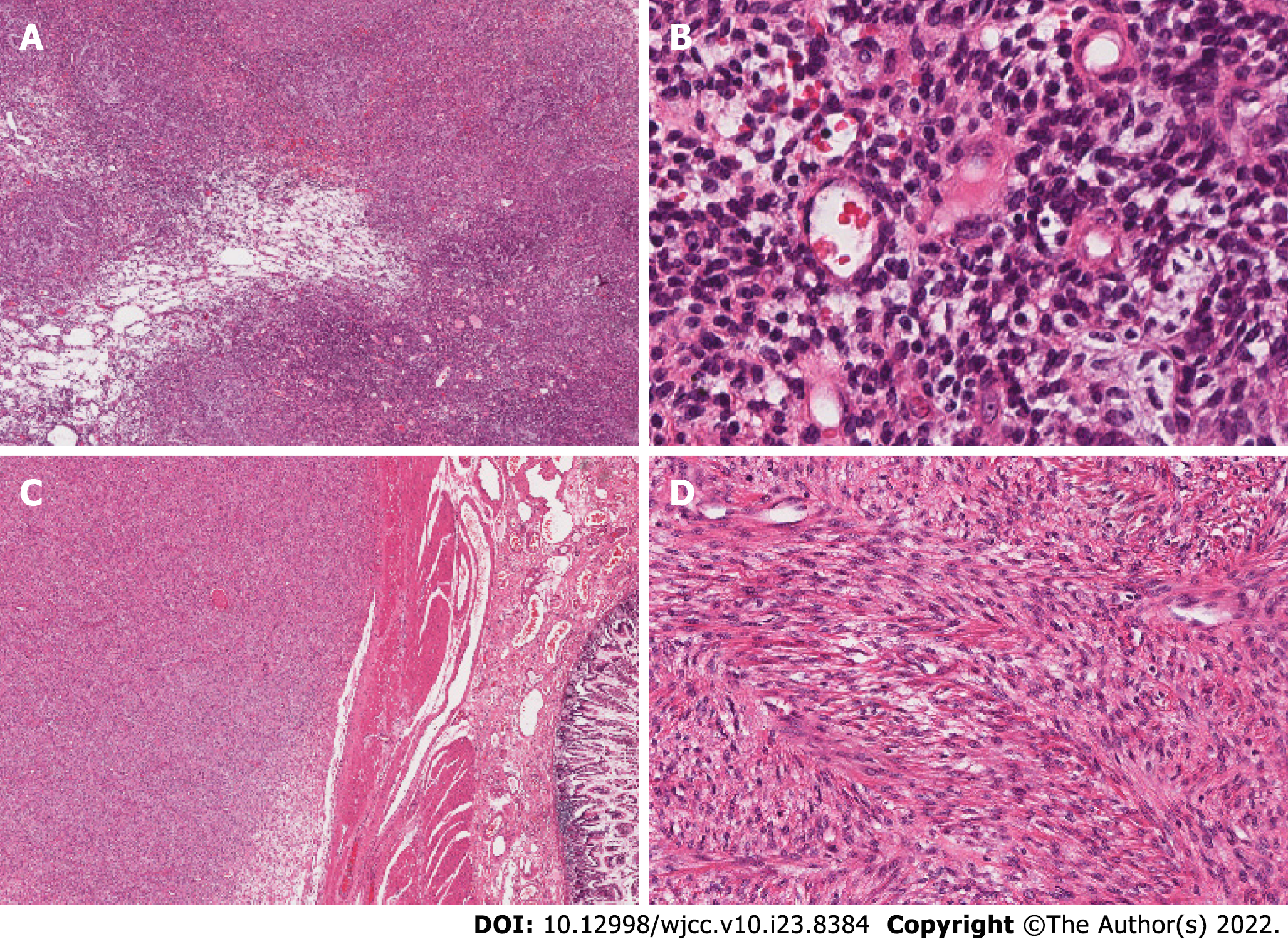 Considering the patient’s medical history and clinical and histopathological findings, we entertained a diagnosis of Meigs syndrome. We initially believed the right ovarian tumor to be a sex cord-stromal cell tumor (, fibroid or follicular membrane fibroma). The mesenteric mass was initially believed to be a gastrointestinal stromal tumor (GIST). However, to narrow the differential diagnoses, we opted to perform further immunohistochemistry (IHC) and molecular analyses.

Figure 3 Immunohistochemistry of the right ovarian tumor tissue and the mesenteric tumor tissue. A and E: The tumor cells are diffusely and strongly positive for estrogen receptor; B and F: Progesterone receptor; C and G: Wilms’ tumor 1; D and H: Cluster of differentiation 10. Original magnification: 200 ×; scale bar: 100 μm.
FINAL DIAGNOSIS

Our analyses confirmed a diagnosis of LGESS for all neoplasms. To distinguish whether the tumors were primary extrauterine ESSs or metastases, we reviewed the patient’s uterine tumor biopsy material from the prior vaginal hysterectomy. Using standard light microscopy at low magnification, the tumor was visible in the uterine smooth muscle as an infiltrative nodular mass (Figure 4A). The cellular growth pattern resembled that of the current ovarian tumor (Figure 4B). We believe that the patient was previously misdiagnosed and that the correct diagnosis should have been LGESS. Therefore, the current tumors were diagnosed as bilateral ovarian and abdominal metastases of the primary tumor from 20 years ago.

The patient underwent bilateral adnexectomy + omentectomy + partial bowel wall resection + mesenteric mass excision + rectal anterior mass excision + abdominal wall tumor resection. After the surgery, she was treated with medications that included anti-inflammatory, anticoagulation, gastric protection, fluid supplementation, water and electrolyte balance. The patient was discharged on the sixth day after the operation and did not complain of any complications. Endocrine therapy was conducted with oral letrozole tablets.

The patient had been followed up for nine months after surgery. She had come back eight times for re-examination and prescriptions subsequent to hospital discharge. Imaging examination was not repeated. Abnormal liver function was detected with elevated alanine aminotransferase and aspartate aminotransferase.

Endometrial stromal tumors mainly occur in the uterus and are categorized based on tumor morphology, immunophenotype, and molecular pathology as follows: endometrial stromal nodules, LGESS, high-grade ESS, and undifferentiated uterine sarcoma[9]. LGESS is a rare malignant tumor that shares morphologic resemblance with endometrial stroma in the proliferative phase. LGESS is capable of infiltrative growth with or without lymphovascular invasion.

At presentation, the patient had no known history of ESS. In the absence of uterine tissue, we initially considered a diagnosis of primary extrauterine ESS (EESS), a type of extrauterine ESS with no accompanying intrauterine lesions[10]. At present, the pathogenesis of EESS remains unclear, but the following two hypotheses have been proposed: (1) Malignant transformation of endometriosis; and (2) Malignant transformation of pluripotent body cavity epithelium established during embryonic development[11,12]. In support of the first hypothesis, multiple reports of EESS describe swollen endometriotic lesions located in tissue adjacent to the tumor. In other cases, EESS has been found in the fallopian tubes, ovaries, and pelvic peritoneum, or it has become widely distributed in the abdominal and pelvic cavities. In support of the second hypothesis, this may result from interstitial cells of the body cavity epithelium differentiating into Müllerian duct epithelium and stroma. However, more cases are required for further substantiation. We did not find endometriotic lesions in our patient, and after extensive analyses, a diagnosis of recurrent and metastatic LGESS was definitive.

The morphology of the bilateral ovarian tumors in our patient was indistinguishable from endometrial stroma in the proliferative stage. In contrast, the mesenteric lesions had a fibrous appearance. The morphologic variation of LGESS is known; however, variable forms are less frequently reported, possibly because misdiagnosis is common.

Previously, IHC has shown LGESS to be diffusely and strongly positive for ER, PR, CD10, and WT1, characteristics which serve to distinguish LGESS from other soft tissue tumors[2,3,13-15]. Specifically, WT1 shows diffuse nuclear positivity in LGESS, while cytoplasmic rather than nuclear staining is more common in other extrauterine soft tissue tumors (e.g., GIST, solitary fibrous tumors, and leiomyomas)[16]. Smooth muscle markers like desmin and h-caldesmon are indicative of neoplasms with smooth muscle differentiation; neoplasms with sex cord-like differentiation may stain positive for α-inhibin, calretinin, and CD99. Therefore, the pattern of IHC positivity in our case supported the diagnosis of LGESS over other soft-tissue tumor types.

The common genetic mutation in LGESS is the fusion of JAZF1 with other genes[17-19]. However, neither our FISH nor our NGS results detected mutations in genes related to ESS such as JAZF1, BCOR, or YWHAE. The results did not refute our diagnosis because one-third of LGESSs do not harbor any genetic mutations[19]. Although the gene mutations in the two sites were not consistent with those found by NGS, it might be that they were somatic mutations in the process of tumor progression and that the tumors originated from the same tumor 20 years ago.

As LGESS usually has a favorable prognosis, the choice of surgical approach, especially for young female patients, is controversial. Surgery including hysterectomy and bilateral salpingo-oopherectomy is considered the initial standard management[20]. Bai et al[21] showed that although ovary preservation has a higher risk of recurrence, it does not affect the overall survival rate. Our patient underwent only a hysterectomy 20 years prior, and no further treatment was performed. For LGESS confined to the uterus, more studies are needed to confirm whether preserving ovarian function is feasible.

The morphology of LGESS may vary according to tumor location. LGESS with fibroblast differentiation is rare and may be easily misdiagnosed as GIST or leiomyosarcoma. Based on our findings, we suggest performing IHC or molecular analyses for LGESS diagnostic certainty. A clear and correct diagnosis is critical to support appropriate treatment, improve prognosis, and guide patient care.