Morbihan disease is a rare cutaneous disorder characterized by non-pitting edema and erythema of the upper two-thirds of the face. In severe cases, orbital and facial contour changes may affect the visual field, and there is no guideline for the standard treatment of this disease. Existing treatment methods have been reported to be associated with long medication cycle, easy recurrence after drug withdrawal, and multiple adverse reactions.

A 55-year-old Chinese woman presented to our hospital with non-pitting edema and erythema of the upper two thirds of her face for 5 mo. Physical examination showed obvious edema and erythema on the upper face. The boundary was unclear, the lesions were hard and non-pitting, and infiltration was obvious by touch. Pathological examination revealed mild hyperkeratosis of the epidermis, nodular inflammatory lesions in the dermis, epithelioid granuloma, and inflammatory cell infiltration with lymphocytes and histiocytes around skin appendages and blood vessels. Alcian blue staining, acid fast staining, silver staining and periodic acid-Schiff staining were negative. The patient was diagnosed with Morbihan disease. She was treated with prednisone acetate and tripterygium wilfordii polyglycoside tablets for 4 mo, and the edema was slightly reduced, but transaminase levels were significantly increased. Compound glycyrrhizin capsules were administered for liver protection for 1 mo; however, facial edema did not significantly improve and transaminase levels continued to increase. Total glucosides of paeony capsules were then administered for 4 mo, and transaminase level returned to normal and the patient’s facial edema disappeared completely.

Total glucosides of paeony has a remarkable effect in Morbihan disease, without adverse reactions.

Core Tip: Morbihan disease is a rare skin disease characterized by non-pitting edema and erythema of the upper two-thirds of the face. The orbital and facial contour changes can affect the field of vision and cause disfiguring damage if not treated in time. The specific pathogenesis is unclear, and there is no standard treatment guideline for this disease. Thus, it is necessary to identify a safe and effective treatment. We treated a case of Morbihan disease with total glucosides of paeony and achieved very good results with no adverse reactions. The treatment of Morbihan disease with total glucosides of paeony has not previously been reported.

Morbihan disease, also known as Morbihan syndrome, is a rare skin disease named by Gorin et al[1] in 1991, with only a few sporadic cases reported worldwide. The main clinical manifestations are edema and erythema of the upper two-thirds of the face without obvious discomfort. Development of the disease can cause malformation and visual field defects, affecting patients’ quality of life[2]. Therefore, early diagnosis and treatment are of great significance. Currently, there is no standard treatment for Morbihan disease. We describe a 55-year-old female patient who received total glucosides of paeony for this rare disease with good efficacy and no adverse reactions.

A 55-year-old female patient presented to our Department of Dermatology with non-pitting edema and erythema of the upper two-thirds of the face for 5 mo.

The patient had edema and erythema of the upper two-thirds of the face 5 mo ago, and there was no itching or discomfort related to the skin lesions. The patient had previously been treated in two hospitals, where the doctors considered her condition considered to be caused by an allergy and treated her with antihistamines, but this treatment was ineffective. The primary skin lesions gradually became worse.

The patient was previously healthy and denied any history of acne, rosacea, erysipelas, allergies, diabetes, or other diseases.

The patient denied genetic diseases, and there was no similar disease in the family.

On physical examination, temperature, pulse, respiration, and blood pressure were normal. Examination of the heart, lungs, abdomen, and nervous system showed no abnormalities. Dermatological findings showed obvious edema and erythema on the forehead, between the eyebrows, and on both eyelids, nose, and both cheeks. The skin lesions were hard and non-pitting, and had unclear boundaries and obvious infiltration by touch (Figure 1A). The rest of the skin showed no abnormalities. No visual field damage was observed. 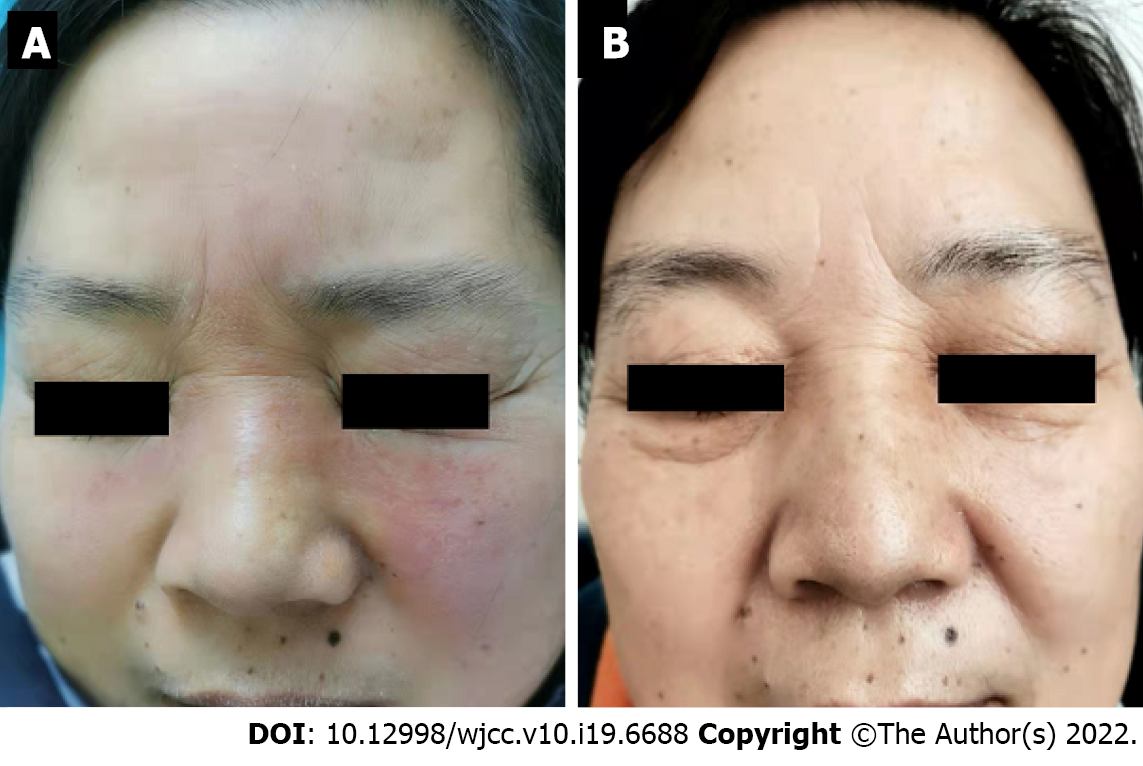 Figure 1 Facial lesions of the patient with Morbihan disease. A: Non-pitting edema and erythema of the upper two-thirds of the face; B: The lesions disappeared completely after 4 mo of treatment with total glucosides of paeony capsules, and follow-up of almost 1 yr showed no recurrence.
Laboratory examinations

Routine blood tests, renal function, and electrolytes were all within the normal range. Routine urine test showed positive occult blood (1+), and other values were normal. The tuberculin test, antinuclear antibody spectrum, and anti-double stranded DNA antibody were negative. All immunological indicators were normal. Liver function analysis showed that alanine aminotransferase (ALA) was 44 U/L, and other values were normal. Histopathological examination of skin lesions on the left side of the face revealed mild hyperkeratosis of the epidermis, nodular inflammatory lesions in the dermis, epithelioid granuloma, and inflammatory cell infiltration dominated by lymphocytes and histiocytes around skin appendages and blood vessels (Figure 2A-C). Alcian blue staining, acid fast staining, silver staining, and periodic acid-Schiff (PAS) staining were all negative (Figure 2D-G). 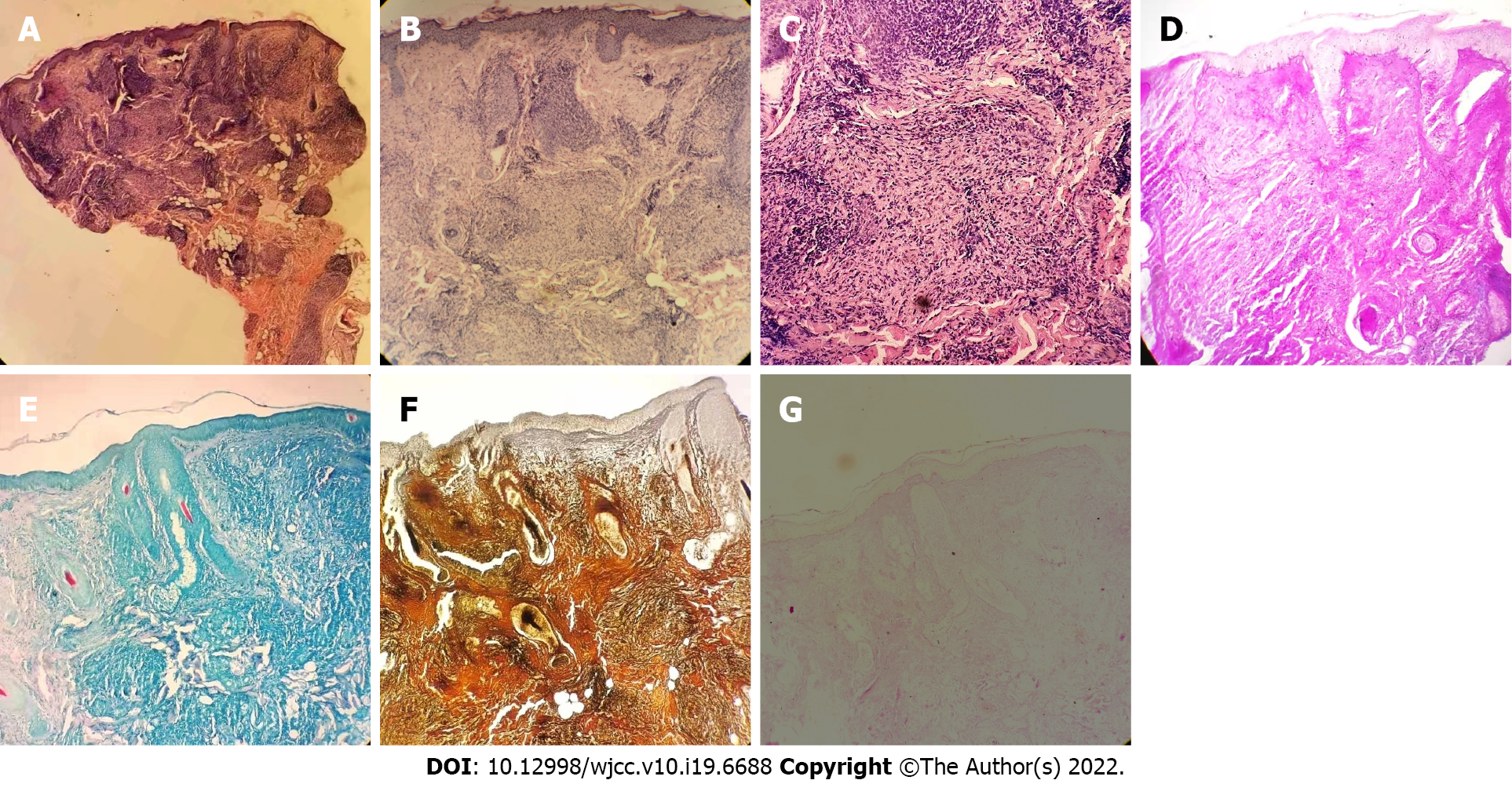 A chest X-ray showed no abnormalities.

The patient was diagnosed with Morbihan disease.

Facial edema disappeared completely after 4 mo of treatment with total glucosides of paeony. The patient was followed for almost 1 year and was in good physical condition without facial edema.

The specific potential cause of Morbihan disease is unclear, and some scholars believe that it is a rare complication of acne[3]. Some researchers suggest that it is related to rosacea[4,5], and its pathogenesis may be related to chronic inflammation, which affects lymphatic reflux and leads to local skin edema[6]. Recent studies have suggested that edema may be associated with non-insulin-dependent diabetes mellitus[7,8]. Our patient had no history of acne, rosacea, or diabetes, and the specific cause of the disease was unclear.

The histopathology of this disease is mainly non-specific inflammation, which is manifested by telangiectasis and infiltration of inflammatory cells such as lymphocytes around hair follicles and blood vessels[9], and granulomatous tissue can also be seen in a few cases[2]. The histopathological findings of the skin lesions in the present patient were nodular inflammatory lesions in the dermis, epithelioid granuloma, and inflammatory cell infiltration dominated by lymphocytes and histiocytes around skin appendages and blood vessels. This is consistent with the existing case reports of Morbihan disease[4,10-12].

This disease should be distinguished from angioedema, dermatomyositis, lupus erythematosus, chronic actinic dermatitis, skin tuberculosis, and sarcoidosis. The present patient had no history of allergy or family inheritance. The skin lesions showed infiltrating edema, which did not subside within a short time, and pruritus was not observed. Eosinophils were not increased, and antihistamine treatment was ineffective, which excluded angioedema. The patient had no violet erythema on the eyelids, no fatigue, no muscle soreness, no specific Gottron papules on the dorsal joints of the limbs, and no immunological positive indicators, and histopathology did not show liquefaction degeneration of basal cells or mucin deposition in the dermis, which excluded dermatomyositis. The patient's skin lesions were not butterfly erythema, without hair follicle horn plug and adherent scales, without light sensitivity, and with no abnormal immunological indicators and no mucin deposition in the dermis, which ruled out lupus erythematosus. The patient had no mossy lesions, no pruritus, no history of long-term outdoor exposure, and no light sensitivity; therefore, chronic actinic dermatitis was ruled out. The tuberculin test was negative, and lung examination showed no abnormalities; acid-fast staining, silver staining, and PAS staining were negative, and histopathology showed no caseous necrosis, thus excluding skin tuberculosis. The patient's lung was normal and histopathological findings showed no tuberous granuloma; therefore, sarcoidosis was ruled out. The patient presented with chronic non-pitting edema of the upper two-thirds of the face and no pruritus in the edematous area. Histopathology showed non-specific inflammation, and the final diagnosis was Morbihan disease.

In terms of the treatment of Morbihan disease, a review of the existing literature showed that most cases were treated with glucocorticoids and tetracycline antibiotics[10], and thalidomide treatment has also been reported[13]. The latest report shows that good results were achieved with isotretinoic acid combined with ketotifen for the treatment of Morbihan disease[14]. Glucocorticoids, tetracycline antibiotics, thalidomide, and isotretinoic acid agents have been reported to have direct or indirect anti-inflammatory effects, indicating that anti-inflammation is a very important treatment in this disease. The histopathological findings of nonspecific inflammation in Morbihan disease seem to support this.

Existing treatment methods for Morbihan disease have shortcomings such as long treatment cycle, disease recurrence after drug withdrawal, and multiple side effects. In the present case, the patient was treated with a glucocorticoid in the early stage, and inflammation was controlled within a short period. However, the disease recurred after reduction of the hormone, indicating that it is difficult to achieve a complete cure with only anti-inflammatory treatment. In addition to anti-inflammatory treatment, it is necessary to eliminate the initial factors causing inflammation. The clinical characteristics of this disease include chronic recurrence. Isotretinoic acid treatment of this disease has achieved good results, and analysis has found that isotretinoic acid has both anti-inflammatory and immunomodulatory effects, suggesting that inflammation in this disease may be related to immunity. The major disadvantages of isotretinoic acid are the occurrence of adverse reactions after long-term use, and patient’s poor tolerance. There are reported cases of tripterygium wilfordii treatment achieving good results[15]. Our patient also received tripterygium wilfordii treatment, but developed elevated transaminase levels during treatment, and finally had to terminate tripterygium wilfordii. Therefore, it was necessary to identify an effective drug with few side effects.

The pathophysiological mechanism of Morbihan disease is not fully understood. There is a relatively consistent view among researchers that edema in Morbihan disease is mainly caused by lymphatic obstruction or poor lymphatic return due to inflammation[26]. Studies have shown that the nitric oxide signaling pathway may be involved in the destruction of the integrity of lymphatic vessels[7], and total glucosides of paeony can effectively inhibit the production of nitric oxide and other inflammatory factors in macrophages in the rheumatoid arthritis model[27], and can play an anti-inflammatory role by inhibiting the activation and recruitment of inflammatory cells[28]. Therefore, it is speculated that the mechanism of total glucosides of paeony in the treatment of Morbihan disease is to maintain the integrity of lymphatic vessels and prevent the occurrence of edema through the similar anti-inflammatory mechanism mentioned above.

Morbihan disease is rare, and only one case has been reported in China to date. Therefore, it is difficult to carry out research on the multi-center large-sample treatment at present. However, the report of an effective treatment strategy in a single case may still be helpful in treating patients with Morbihan disease and in further study of this disease.

We sincerely thank all the medical staff who were involved in the treatment of this patient.