Matrix metalloproteinases (MMPs) are members of the neutral proteinase family. They were previously thought to be anti-fibrotic because of their ability to degrade and remodel of extracellular matrix. However, recent studies have shown that MMPs are implicated in initiation and progression of kidney fibrosis through tubular cell epithelial–mesenchymal transition (EMT) as well as activation of resident fibroblasts, endothelial-mesenchymal transition (EndoMT) and pericyte-myofibroblast transdifferentiation. Interstitial macrophage infiltration has also been shown to correlate with the severity of kidney fibrosis in various chronic kidney diseases. MMPs secreted by macrophages, especially MMP-9, has been shown by us to be profibrotic by induction of tubular cells EMT. EMT is mainly induced by transforming growth factor-β (TGF-β). However, MMP-9 was found by us and others to be up-regulated by TGF-β1 in kidney tubular epithelial cells and secreted by activated macrophages, resulting in EMT and ultimately kidney fibrosis. Therefore, MMP-9 may serve as a potential therapeutic target to prevent kidney fibrosis in chronic kidney disease. This review, by a particular focus on EMT, seeks to provide a comprehensive understanding of MMPs, especially MMP-9, in kidney fibrosis.

Core tip: Matrix metalloproteinases (MMPs) were previously known to be anti-fibrotic for their ability to degrade and remodel extracellular matrix proteins. Recent studies including our own have shown that MMPs are implicated in initiation and progression of kidney fibrosis. MMP-9 of both tubular and macrophage origins were found to be able to induce epithelial-mesenchymal transition of tubular cells, an important mechanism causing kidney fibrosis. This review, by focus on MMP-9 and epithelial–mesenchymal transition, seeks to provide a comprehensive understanding for the roles of MMPs in kidney fibrosis.

Kidney fibrosis is the final common pathway of parenchymal destruction for diverse chronic kidney diseases (CKD) including those resulting from glomerulonephritis, diabetes and hypertension[1-3]. It is characterized by substantial accumulation and activation of interstitial myofibroblasts, and excessive deposition and accumulation of extracellular matrix by myofibroblasts[4]. Myofibroblasts plays a pivotal role in the development of CKD and kidney fibrosis. Several cellular events, including tubular cell epithelial-mesenchymal transition (EMT), endothelial-mesenchymal transtion[5-7] and fibroblast activation, have been recognized as major sources of myofibroblast in kidney fibrosis. Although EMT has been challenged recently as a source of interstitial myofibroblasts[8], it remains generally accepted that EMT does contribute to kidney fibrosis[9-12].

Matrix metalloproteinases (MMPs) are a family of neutral proteinases，well known for their degradation and remodeling of extracellular matrix proteins[13]. However, the biological functions of MMPs are much more complex and diverse than previously assumed. MMPs also play a role in cell migration, cell-cell and cell-matrix adhesion and in release and activation of extracellular matrix-bond growth factors and cytokines. Some of these functions have been shown to play a role in the initiation and/or the progression of CKD and kidney fibrosis[14]. MMP-9 is known to be capable of cleaving osteopontin, a potent macrophage chemoattractant; activating transforming growth factor-β (TGF-β), a well known inducer of fibrosis; and inducing tubular cell EMT, an important source of myofibroblasts in renal diseases[15,16]. In this review, we will discuss roles of MMPs, especially MMP-9, in the development of CKD and kidney fibrosis.

MMPS AND INFLAMMATION IN CKD

CKD is characterized by pathological changes of glomerulosclerosis, tubular atrophy and tubulointerstitial fibrosis resulting from chronic injuries and inflammation of kidney[3]. Hypertension and diabetes are also major causes of CKD. MMPs are known to play important roles during inflammation. Besides the known roles for MMPs in extracellular matrix remodeling, they were found to be critical in recruitment and chemotaxis of inflammatory cells[17]. Elevated serum levels MMP-2 and -9 have been found in CKD patients[18] while increased levels of MMPs may serve as stress markers in these patients[19]. Previous studies have shown that macrophages play a critical role in progression of kidney fibrosis of all forms of chronic kidney diseases[20-22]. As one of the major sources for MMPs and profibrotic cytokines, macrophage has been associated with excessive accumulation of extracellular matrix proteins and myofibroblasts in CKD patients as well as experimental models[15,23]. Moreover, macrophages also release TGF-β, leading to upregulation of MMP-9 by tubular epithelial cells. MMP-9 was fond by us to mediate EMT of the tubular epithelial cells downstream of TGF-β[15,16]. A previous report has shown that serum levels of MMP-2 were correlated with proteinuria, intima media thickness and reduced kidney function in patients with CKD[24]. Plasma concentration of MMP-9 was found to be increased in the early stage of diabetic kidney disease[14]. In a rat model of chronic glomerulonephritis, expression of MMP-2 and TGF-β were shown to be significantly up-regulated[25]. In hypertension and hypertensive end-stage kidney disease (ESKD), up-regulation of MMP-9, MMP-2 and MMP-10 were observed[26]. These evidences all demonstrated upregulation of MMPs in the progression of CKD.

ROLE OF MMPS IN KIDNEY FIBROSIS

EMT of renal tubular epithelial cells has been shown to be an important mechanism for development of kidney fibrosis in CKD[33,34]. It can be induced by TGF-β represents a functional transition of polarized epithelial cells into mesenchymal myofibroblast cells which are responsible for extracellular matrix deposition that leads ultimately to kidney fibrosis[35-37]. EMT is characterized by loss of epithelial markers such as E-cadherin and cytokeratin, and by nuclear translocation of β-catenin accompanied by de novo expression of mesenchymal markers typically α-smooth muscle actin (α-SMA), vimentin and fibroblast specific protein 1[38]. It is found in the development of human kidney disease and fibrosis as indicated by the findings from renal biopsy specimens that tubular epithelial cells underwent phenotypic changes including de novo SMA expression and loss of cytokeratin[29,39]. In murine model of unilateral ureteral obstruction (UUO), EMT was observed to actively participate in kidney fibrosis[36]. Other studies have shown that the number of tubular epithelial cells with EMT features is associated with decreased serum creatinine and the degree of interstitial damage in human renal biopsies of different renal diseases[29,40]. Furthermore, the progression of myofibroblast accumulation was reversed in the absence of EMT[29,31]. Whereas EMT has been extensively investigated as a major mechanism for kidney fibrosis, mesenchymal transition of kidney endothelial cells[41], activation of resident fibroblasts and pericytes[8] have also been demonstrated to contribute to myofibroblast population in kidney fibrosis. Iwano et al[33] showed conclusively using proximal tubule lineage-tagged mice that up to 36% of tubulointerstitial myofibroblasts were originated by tubular EMT. Kidney endothelial cells by endothelial lineage tracing have been shown to contribute to 30%-50% of myofibroblasts through EndoMT[34].

CONTRIBUTION OF MACROPHAGE MMP-9 IN EMT

The contribution of MMP-9 to kidney fibrosis has been demonstrated previously in several studies, either by indirect inhibition through the use of t-PA deficient mice (as t-PA is an inducer of MMP-9) or the use of MMP-9 knockout mice[31]. However the utility of MMP knockout models is questionable due to compensatory up-regulation of other MMPs[47,48], and because of conflicting results in cancer studies[49], where MMPs were highly involved in cancer progression.

To define the role of MMP-9 in vivo, direct inhibition of MMP-9 activity is preferable. Knowing the expression pattern and cellular origin of an MMP and whether it plays a protective or destructive role is essential in the development of an effective MMP-based therapeutic strategy. In fact, a study of Zeisberg et al[48] demonstrated that early inhibition of MMP activity, specifically that of MMP-2, 3 and 9 is protective against Alport disease in mice deficient in α3 (IV) chain of type IV collagen, whilst late-stage inhibition of MMP activity led to acceleration of disease progression associated with interstitial fibrosis and early death.

Results from our recent study demonstrated a biphasic expression of MMP-9 during early- and late-, but not mid-stage in the course of UUO[44]. Interestingly, we showed tubular cells to be the predominant source of MMP-9 during early-stage, whereas tubular cells, macrophages and myofibroblasts produced MMP-9 during late-stage UUO. Early and late-stage inhibition of MMP-9 by MMP-9 neutralizing antibody or MMP-2/9 inhibitor resulted in a reduction in: (1) MMP-9 cleaved osteopontin[44] which is known to play a role in macrophage recruitment[50]; (2) infiltration of macrophages; (3) tubular cell EMT as indicated by a reduced translocation of β-catenin and α-SMA expression in tubular epithelial cells; and (4) in kidney fibrosis[44]. Taken together, findings from our previous and recent studies have suggested a potential mechanism underlying the contribution of MMP-9 to kidney fibrosis (Figure 1). 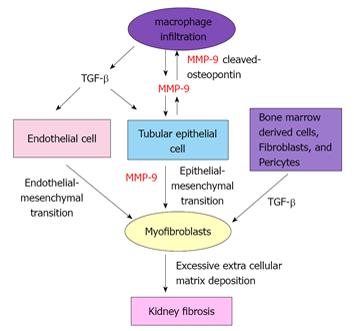 Kidney fibrosis represents a failed wound healing in progressive chronic kidney diseases. It is characterized by interstitial infiltration with mononuclear inflammatory cells, substantial accumulation and activation of interstitial myofibroblasts and consequent progressive deposition and accumulation of extracellular matrix, mainly by myofibroblasts. MMPs are proteolytic enzymes involved in degradation of extracellular matrix and basement membrane and play important roles in the progression of CKD and interstitial fibrosis. Macrophages and myofibroblasts are two major effector cells in CKD and kidney fibrosis. We and others found that MMP-induced EMT contributes to generation of myofibroblasts, and MMP-9 secreted by activated macrophages is at least partially responsible for the profibrotic role of interstitial macrophages. Disruption of E-cadherin by MMPs directly mediates tubular cell EMT downstream of TGF-β1.

Traditionally, MMPs have been considered to be anti-fibrotic factors due to their proteolytic degradation of extracellular matrix. Reduced MMP proteolytic activity or an increase of tissue inhibitors of MMP (TIMPs) was thought to account for extracellular matrix accumulation and fibrosis[14,19]. Discovery of their in vivo physiological non-extracellular matrix substrates in recent years has revealed diverse biological functions of MMPs. Against expectations, MMP-2 and MMP-9 have been shown by us and others to be profibrotic through induction of renal tubular cell EMT. Moreover, failure of MMP inhibitors in anti-cancer clinical trials has revealed that the biological function of MMPs is not simply the destruction of extracellular matrix, as originally assumed, but has emphasized that MMPs also target diverse non-extracellular matrix substrates, such as cell surface molecules, cytokines, growth factors and adhesion molecules. MMPs are dysregulated and are involved in virtually every aspect of inflammation and tissue repair. Our studies suggest that specific inhibition rather than promotion of proteolytic actions of MMP, in particular MMP-9, may offer a novel therapeutic approach to prevent renal fibrosis.