Transplant renal artery (TRA) pseudoaneurysm can result in bleeding, infection, graft dysfunction and graft loss. We report the management of a renal transplant recipient who presented five months after renal transplantation with deterioration of renal function, who was found to have TRA pseudoaneurysm and TRA stenosis. Both were treated radiologically by using expandable hydrogel coils (EHC) in combination with stenting. Improvement in clinical, biochemical and radiological parameters were observed after the intervention. To our knowledge, this is the first report in the transplant literature on the use of EHC for the treatment of a TRA pseudoaneurysm.

Core tip: Transplant renal artery (TRA) pseudoaneurysm is an uncommon complication after renal transplantation, which can cause transplant dysfunction, bleeding, infection and graft loss. Expandable hydrogel coils should be considered in the treatment of TRA pseudoaneurysm as they have been effective in our patient.

Transplant renal artery (TRA) pseudoaneurysm can result in bleeding, infection, graft dysfunction, graft loss, lower limb ischaemia, limb loss and mortality[1]. The treatment of TRA pseudoaneurysm remains challenging. The expandable hydrogel coil (EHC) embolization system is a relatively new type of device that has been described to successfully treat intracranial and peripheral pseudoaneurysms. These are helical platinum coils coated with exapandable hydrogel polymer. The hydrogel coating undergoes full expansion within 20 min attending a size between 4-5 times the size of the coils on coming in contact with blood. The stasis of the blood causes organization of thrombus, which fills the aneurysm causing complete its occlusion[1]. To our knowledge, there is no published data in the transplant literature on the application of EHC in the treatment of TRA pseudoaneurysm. We describe the successful management of a case of TRA pseudoaneurysm using EHC and review the pertinent literature.

A 38-year-old male patient received a renal transplant (RT) of a kidney from a donation after circulatory death donor. The right donor kidney had a single real artery on an aortic patch and the short renal vein which was elongated by using a segment of inferior vena cava. The kidney was implanted in the right iliac fossa by anastomosing the renal artery to the external iliac artery in an end-to-side fashion using continuous 5/0 prolene sutures (Ethicon Inc., United Kingdom) and renal vein to the external iliac vein in the similar fashion. An extravesical ureteroneocystostomy was performed as describe by Lich-Gregoir. The vascular anastomosis time was 45 min while the total cold ischaemic time was 15 h and 38 min. The patient received basiliximab (Sandoz, United Kingdom) and methyl prednisolone as induction therapy and tacrolimus, mycophenolate mofetil and prednisolone as maintenance immunosuppression.

The transplant had delayed graft function and required haemodialysis during the first week until renal function started to improve. The initial ultrasound scan of the transplant kidney showed a well perfused graft with no evidence of hydronephrosis or any collection and the resistive indices (RI) were within normal limits. The renal function was stable with a serum creatinine of 136 μmol/L and an estimated glomerular filtration rate (eGFR) of 51 mL/min per 1.73 m2 at 3 mo post-transplantation.

At five months post-transplantation, on routine outpatient review, deterioration in kidney renal function with a rise in serum creatinine to 633 μmol/L (eGFR 13 mL/min per 1.73 m2) was observed. A duplex ultrasound scan showed a well-perfused kidney with no evidence of hydronephrosis. An ultrasound-guided biopsy of the kidney, which was treated with three pulses of intravenous methyl prednisolone, showed features of acute cellular rejection. However, there was no improvement in renal function. A repeat duplex ultrasound scan showed damped flow signals on the intra-renal blood vessels with reduced RI ranging between 0.4 and 0.45. There were associated high velocities at the transplant artery origin which were suspicious of TRA stenosis. A computerized tomography (CT) scan was done which showed a 20 mm × 25 mm pseudoaneurysm arising from the aortic patch and the TRA origin lying adjacent to the pseudoaneurysm was tightly narrowed (Figures 1 and 2). After discussion in the departmental multidisciplinary team meeting and with patient’s informed consent, he underwent radiological intervention as described below. 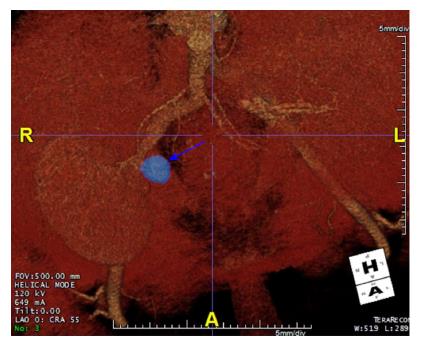 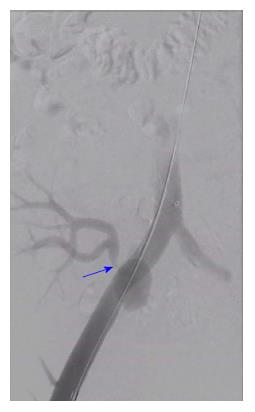 Under ultrasound guidance, the right common femoral artery was punctured, and a 5Fr sheath was inserted. 7500 unit of heparin was administered intravenously. The dimensions of the TRA were confirmed and were found to be like those of CT scan findings. The TRA was catheterized using a size 4Fr Berenstein® catheter and Terumo® wire (Terumo Medical Corporation, United States), subsequently exchanged for a 0.014 Thruway wire (Boston Scientific Inc., Ireland) and was left in situ as a “safety wire”. The left common femoral artery was punctured and a 6Fr destination sheath was placed over the aortic bifurcation. Through the ipsilateral 6Fr sheath, a 10 mm percutaneous transluminal angioplasty (PTA) balloon was placed opposite the aneurysm neck. From the 6Fr sheath, a 4Fr Cobra (Cook Medical, United States) and 2/7 Progreat® microcatheter (Terumo Medical Corporation, United States) were used to gain access to the aneurysm sac. Within the right external iliac artery, the PTA balloon was inflated to reduce the risk of coil prolapse and migration and the aneurysm was embolized using two Azur® 20 mm Framing coils (Terumo Medical Corporation, United States), and packed with Azur® Hydrogel Coils. The pseudoaneurysm was filled with coils and hydrogel leading to its complete occlusion. Subsequently, the stenosed transplant RA was stented using a 6 mm × 20 mm Hippocampus stent (Medtronic, United Kingdom), which restored the patency of the stenosed renal artery and normal blood flow (Figure 3). 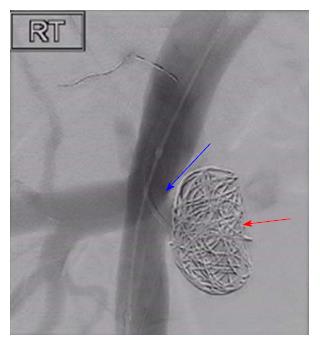 Following embolization of the pseudoaneurysm and stenting of the TRA, improvement in renal function occurred leading to a fall in the serum creatinine level to 159 μmol/L (eGFR 47 mL/min per 1.73 m2). A follow-up CT angiogram one month after the intervention showed a patent TRA with successful coiling of the pseudoaneurysm and satisfactory position of the stent with no evidence of TRA stenosis. The patient continues to be followed up in the routine RT clinic and has a serum creatinine of 150 μmol/L (eGFR 49 mL/min per 1.73 m2).

TRA pseudoaneurysms can be asymptomatic[14] or can present with RT dysfunction, fever, pain (mainly at the site of the transplant) or a combination of these presentations. Graft loss is a recognized complication of TRA pseudoaneurysms and sometimes bleeding from the ruptured pseudoaneurysm can lead to hemorrhagic shock or death of the patient[8,15]. Lumbar plexopathy has been reported in a previous literature because of pressure effect of the pseudoaneurysm[16], while malignant hypertension is a rare presentation[17].

The choice of the modality of treatment of TRA pseudoaneurysms depends on several factors including the aetiology, haemodynamic stability of the patient, presentation, anatomy, graft function and the radiological features of the pseudoaneurysm[18-22]. Aneurysms larger than 25 mm, progressive enlargement, deterioration of renal function or presentation with symptoms are the main indications for repair[18]. Treatment modalities include minimally invasive techniques using mainly exclusion stents to the external iliac artery, but this may sacrifice the graft[14]. Ultrasound-guided percutaneous thrombin injection in combination with a covered stent has been reported as a successful way of treating TRA pseudoaneurysm with preservation of renal function[18,19].

Traditional aneurysm coiling in general can be associated with complications such as migration, non-target embolisation, inadequate filling, compaction and the technical difficulty in placing the coils leading to added risk to organs, patients and increase in cost[23].

Expandable hydrogel technology coils have been described to treat intracranial and peripheral pseudoaneurysms successfully for number of years. The main advantage of using EHC is related to their superior mechanical occlusion properties resulting in fewer coils deployed and a lower recurrence rate. They are also compatible with imaging modalities[24-26].

In our case, successful radiological and clinical outcomes were achieved with return of serum creatinine to baseline within 48 h of intervention without any complication related to the RT or lower limb. We have employed EHC system to treat TRA pseudoaneurysm, achieved excellent volumetric filling and targeted embolisation and subsequently deployed a stent leading to restoration of transplant renal function to its normality. It offers a new non- invasive technique to treat TRA pseudoaneurysms with preservation of renal grafts; therefore, it should be considered as a first line treatment modality in this clinical situation.

A 38-year-old male, who had received a deceased donor renal transplant presented with deterioration of renal function five months post-transplantation.

On examination, there were clinical features pointing to definitive diagnosis.

The serum creatinine was significantly elevated.

Follow-up of the patient was satisfactory with no adverse events related to the procedure.

This is the first reported case of treatment of a transplant renal artery pseudoaneurysm with wide neck with the use of EHC leading to successful outcomes.