Identification of the cell origin of human neoplasms remains a challenging but important task in cancer research. The outcomes in this area of study may allow us to design novel strategies for early cancer detection and targeted cancer therapeutics. Skin is a great organ to study cancer stem cells because stem cells in skin have been well investigated and approaches of genetic manipulation in specific cell compartments are available to mimic clinical skin cancer in a mouse model. Recently, by using different genetic engineered mouse models, several groups have tried to discover which cell type in skin was responsible for the initiation of basal cell carcinoma, the most common type of skin cancer. These studies raised more questions but also showed more ways for future investigation.

Basal cell carcinoma (BCC) is one of the most common human cancers, so named based on its histological similarity to basal keratinocytes[1]. Almost all BCCs exhibit activation of the Hh signaling pathway, which is a critical regulator of cell proliferation, tissue differentiation and tissue polarity[2]. In normal skin, Hh signaling is temporally and spatially controlled to regulate hair follicle (HF) growth and morphogenesis[3], but dys-regulated in BCC due to loss-of-function mutations in PTCH1 or gain-of-function mutations in SMO[2]. Basal keratinocytes of skin are composed of different types of cells, including stem cells residing within the interfollicular epidermis (IFE) and HF[4,5]. It is still not clear which cell type is responsible for BCC formation. Recently, several groups reported new data to demonstrate the cell origin of BCC by activating Hh signaling in different cell populations in mouse skin.

Youssef et al[6] used different promoter-driven inducible cre expression, including keratin 14, Shh and keratin 15, to activate Hh pathway by induced expression of active SMO mutant, SmoM2. They found that murine BCCs almost exclusively derive from cells in IFE but not HFs. These results are not expected, based on the previous theory that BCC is HF-derived tumor. It is known that Hh signaling is physiologically required for HF growth via stimulation of proliferation of HF progenitors, and these cells might be naturally preferential to mediate Hh pathway-driven tumorigenesis. Soon after, Wang et al[7] reported that development of BCCs in ion-irradiated Ptch1+/- mice were mainly from HF bulge cells. Through lineage tracing study, they found that the great majority of BCCs arose from K15-positive bulge cells. So, these two groups reached opposite conclusions about the putative cell of origin of BCC. One explanation for this discrepancy is that, in the two mouse models, forced expression of mutant Smo and loss of Ptch1 may be different in biological effects. In addition to the inhibition of Hh signaling, Ptch1 can bind cyclin B1 directly to prevent nuclear translocation of cyclin B1, and thus inhibit cell cycle progression[8]. Indeed, Wang et al[7] compared the location of cyclin B1 in tumors arising in the two models, and found more cyclin B1 accumulation in BCC of IR-treated Ptch1+/- mice than that of SmoM2 mice, indicating that nuclear cyclin B1 might facilitate BCC arising from follicle in their model.

No matter how Hh signaling is activated, Gli2 is the primary transcriptional effector for the Hh signaling pathway[9]. Grachtchouk et al[10] engineered mice expressing GLI2 activator (GLI2ΔN) selectively in different cell compartments of epidermis using a novel mouse model, in which Cre-lox and tet-regulated system are combined together to control not only tissue and temporal expression, but also the expression level of GLI2ΔN. Using this new system, they found that a BCC-like skin tumor could arise from different cell types in epidermis, such as Lgr5+ secondary hair germ in the resting HF, outer root sheath in growing HF, IFE and sebaceous gland, but cells in follicle bulge were resistant to GLI2ΔN-induced hyperplasia, probably because of increased apoptosis[10]. After they reduced GLI2ΔN expression level in basal cells by administrating a lower dose of doxycycline, mice developed a BCC-like abnormality, similar to lesions seen in mice expressing mutant Smo, which was thought to be a weaker Hh pathway activator in skin[11]. All these data together can provide another explanation for why Youssef et al[6] only saw IEF origin of BCC in K14:SmoM2 mouse and SmoM2 mutant failed to produce tumors from follicle stem cells in keratin 15-Cre mice.

The resistance of bulge cells to Hh pathway-induced transformation is probably due to the restriction of bulge microenvironment. It was reported that expression of negative regulators of the Hh pathway, such as Gli3 and Sufu, was up-regulated in follicle bulge stem cell niche[12] where a quiescent microenvironment was maintained[13]. However, during wound healing, as shown by the other two groups[14,15], bulge stem cells with high Hh signaling activation were recruited to wounding sites and give rise to tumors in the newly formed epidermis. These data indicate that identification of the BCC cell origin becomes more difficult due to the changing tumorigenic potential during cell migration.

The different models used for cell origin investigation of BCC are shown in Figure 1. 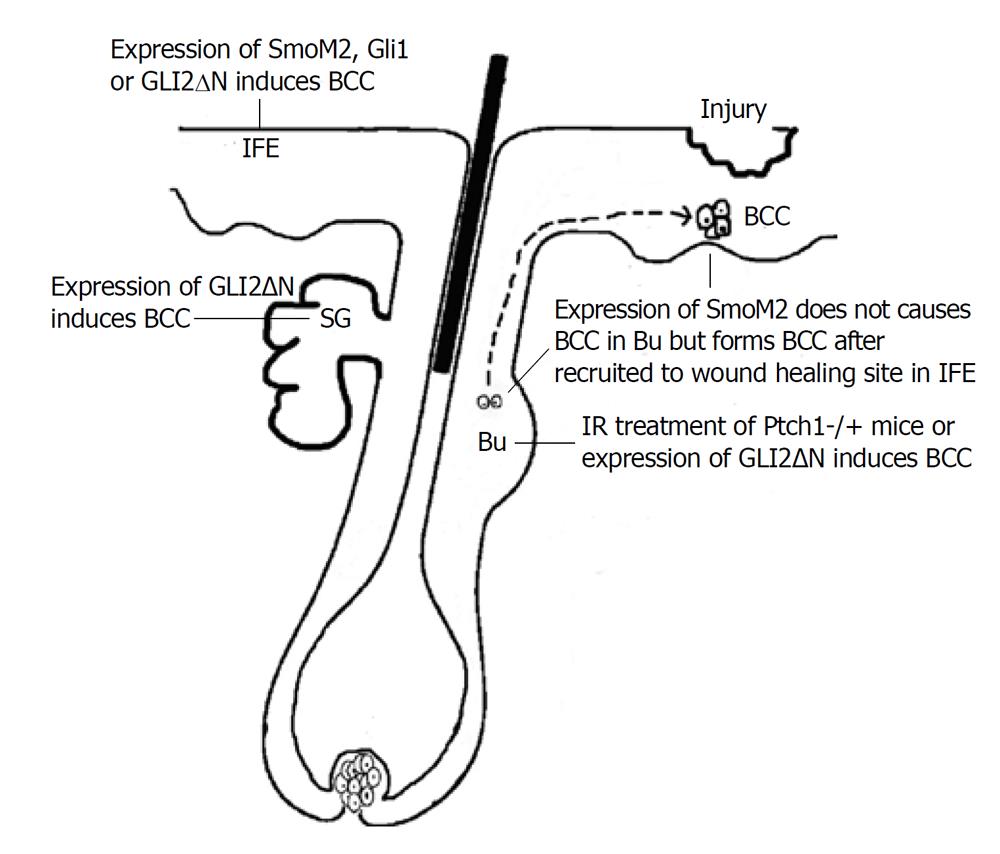 In these recent publications, researchers are trying to address the cell of origin of BCC using a genetically engineered mouse model to activate Hh signaling in different epidermal compartments. All these results are simply based on one mechanism that high-level Hh signaling alone in keratinocytes can produce murine BCC, but these results over simplify the real situation. The cellular origin of BCCs may not be the same cell type in all circumstances, depending on the tissue condition, the targeted component of the Hh pathway for the study as well as the cell population being targeted. The situation becomes further complicated when considering the movement of these mutant cells before tumor formation. It is fair to say these publications bring more curiosity to the field.