Blood pressure (BP) plays an important role in the development and progression of cardiovascular disease. Moreover, hypertensive patients often have additional cardiovascular risk factors. Despite the abundance of antihypertensive drug categories, satisfactory BP regulation is often difficult to achieve. A major cause of this difficulty to properly manage BP is the less than optimal adherence of subjects to treatment. This is often due to the various adverse effects of the antihypertensive drugs. Calcium channel blockers (CCB) have an established efficacy for reducing BP. However, their side effect of peripheral edema is often a cause for the discontinuation of treatment. Manidipine holds some unique properties differentiating it from the rest of the CCB class. It has a better safety profile with a lower incidence of peripheral edema. Moreover, there are indications that manidipine holds additional beneficial attributes, such as improvement of renal function and decrease of insulin resistance.

Hypertension is one of the key factors for cardiovascular disease (CVD) development and progression. The prevalence of hypertensive patients is continuously increasing[1]. Hypertensive subjects often have additional CVD risk factors, such as hyperlipidemia, impaired glucose metabolism and renal impairment, leading to an increased rate of CVD morbidity and mortality[2]. Therefore, a comprehensive management of both hypertension as well as concomitant CVD risk factors is critical when treating hypertensive patients.

Dihydropyridines CCBs act by blocking calcium channels, predominantly L-type channels, thus blocking the entry of Ca2+ into cells. As a result, CCBs cause vascular smooth muscle relaxation and thus vasodilation. However, despite the same basic mechanism of action and the similar chemical structure (Figure 1), the effects of dihydropyridines CCBs are differentiated among the same class[3]. Indeed, the different pharmacokinetic profile (e.g. the elimination half-life, the extended release mechanism of some formulations and the lipophilicity of the different molecules) can lead to diverse effects of different CCBs regarding BP, heart rate and left ventricular mass. 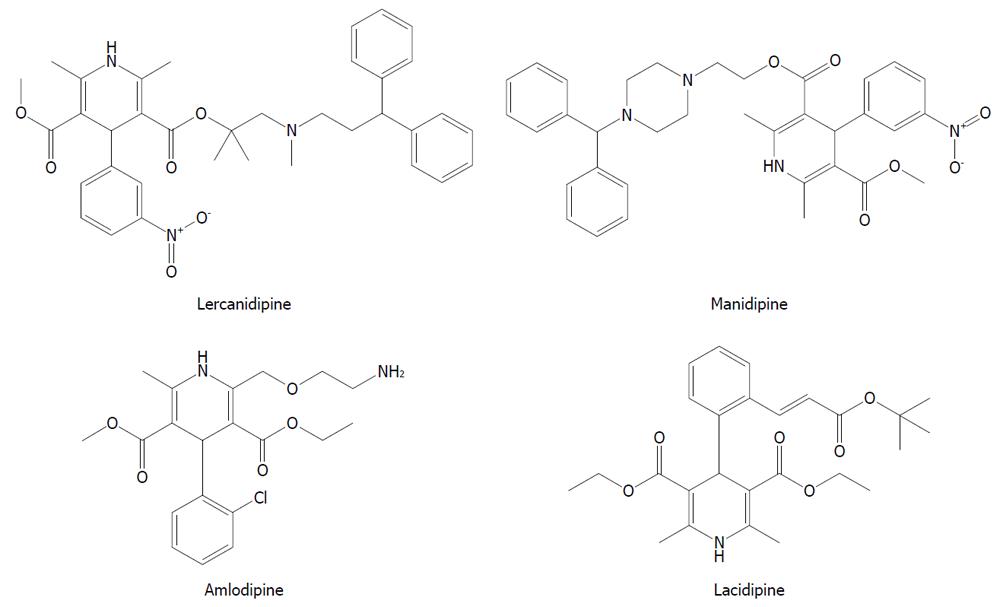 An interesting CCB in the category of dihydropyridines is manidipine. Manidipine holds a number of traits that make it unique among dihydropyridines CCBs (Figure 2). It has a better safety profile, thus improving adherence to treatment. Moreover, its promising pleiotropic effects beyond BP lowering make it an attractive option for hypertensive subjects with concomitant CVD risk factors. 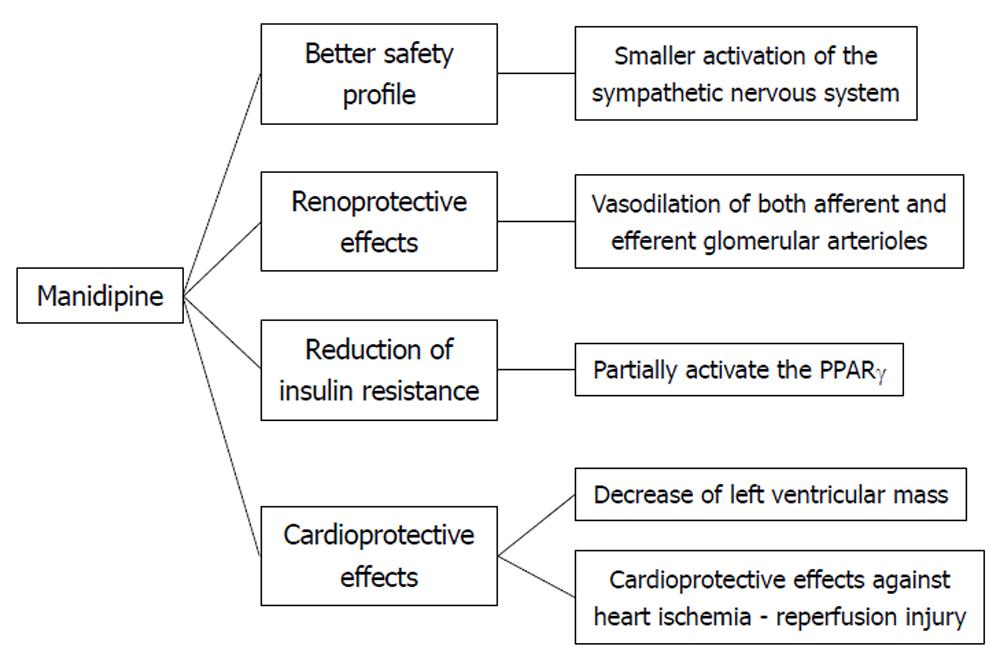 Among the most common adverse effects of CCBs is peripheral edema, which is dose related[4]. CCBs preferentially dilate the precapillary arterioles without a commensurate dilation of the postcapillary venules[5]. Moreover, the CCB-mediated decrease of BP leads to the triggering of the baroreflex-induced stimulation of the sympathetic nervous system[6]. In turn, this activation of the sympathetic nervous system leads to the constriction of postcapillary venules. As a result, an increase of pressure gradient in the capillary level occurs, which together with the hydrostatic pressure lead to the formation of peripheral edema. However, manidipine has shown a smaller degree of sympathetic nervous system activation. Indeed, when compared with other CCBs, manidipine is associated with lower levels of plasma norepinephrine[7]. As a result, manidipine has been shown to have a smaller incidence of peripheral edema among CCBs[8,9]. Therefore, this favorable safety profile can improve adherence to treatment and thus provide better BP control.

Hypertension plays a critical role in the development and progression of renal disease[10]. Older dihydropyridines CCBs have not shown beneficial effects on renal function[11]. On the contrary, some studies have shown a decline of renal function after treatment with some CCBs[12]. There are 2 types of calcium channels: L-type and T-type. L-type calcium channels are predominantly found on afferent renal arterioles while T-type are predominantly found on efferent renal arterioles[13]. Older dihydropyridines CCBs preferentially act on L-type calcium channels. As a result, a vasodilation predominantly of the afferent glomerular arterioles is achieved with older CCBs. Therefore, no reduction in glomerular pressure is achieved and renal capillary pressure autoregulation is impaired, thus negatively affecting renal function. On the other hand, manidipine acts by blocking both L- and T-type calcium channels[14]. Consequently, a vasodilation of both afferent and efferent glomerular arterioles is achieved. As a result, manidipine improves glomerular capillary pressure and preserves renal capillary pressure autoregulation, thus favorably affecting renal function beyond BP lowering[13]. Indeed, various studies have shown the renoprotective effects and reduction of urinary albumin excretion with manidipine treatment[15,16]. Moreover, manidipine has been shown to be equally effective with enalapril (an angiotensin-converting enzyme inhibitor which has established renoprotective effects) regarding the progression of renal disease[17].

An able percent of hypertensive patients have additional CVD risk factors such as dyslipidemia and impaired glucose homeostasis[18]. Some antihypertensive drug categories, such as diuretics and β-blockers, have an overall unfavorable effect on lipid profile and insulin resistance[19]. On the other hand, CCBs have been shown not to significantly alter lipid levels or glucose homeostasis[20]. Manidipine has also been shown to have a neutral effect on lipids[21]. However, a beneficial effect on insulin resistance has been shown with manidipine treatment[21]. Indeed, a reduction of insulin resistance has been observed with manidipine in both non-diabetic and type 2 diabetic patients[22,23]. This favorable effect of manidipine may be linked to the drug’s capacity to partially activate the peroxisome proliferator activated receptor-γ (PPARγ)[21]. PPARγ modify the expression of numerous metabolic related genes and play a major role in glucose metabolism. The effect of manidipine to activate PPARγ is about two-thirds of that of pioglitazone, a full PPARγ activator[21]. This partial activation of PPARγ contributes to the avoidance of side effects commonly associated with thiazolidinediones treatment. Indeed, telmisartan, which is a partial PPARγ activator, has been shown to have a beneficial effect on insulin resistance without sharing the usual side effects of thiazolidinediones[24]. Moreover, an increase of adiponectin levels (which are inversely associated with the development of insulin resistance and metabolic syndrome) has been observed with manidipine[15].

Manidipine is a unique dihydropyridine CCB with established efficacy in BP reduction. In addition, manidipine holds some unique traits which differentiate it from the rest of the CCB class. Indeed, manidipine has a better safety profile with a lower prevalence of peripheral edema. This property can lead to a better adherence to treatment and therefore a better regulation of BP. Furthermore, the drug’s ability to dilate both efferent and afferent renal arterioles contributes to the overall beneficial effects of manidipine on renal function. In addition, the capacity of manidipine to partially activate PPARγ contributes to the improvement of insulin resistance, which is often found in hypertensive subjects.

These pleiotropic effects of manidipine make it an attractive option for a more comprehensive management of hypertensive patients with the coexistence of additional CVD risk factors. Of note, it is unclear whether these pleiotropic effects of manidipine induce beneficial effects regardless of the antihypertensive effect. Moreover, promising results have been obtained when using manidipine in combination with angiotensin-converting enzyme inhibitors, such as dalapril in patients requiring a greater reduction of BP. Indeed, the manidipine/dalapril combination provided a better antihypertensive effect than monotherapy, together with a lower percentage of peripheral edema prevalence than manidipine alone[30,31].