Fractures of the talus are rare in children. A high index of suspicion is needed to avoid missing such an injury, which is not an uncommon occurrence especially with undisplaced fractures. We present an unusual case of an undisplaced talar neck fracture in a five-year-old child leading to a delayed presentation of a symptomatic osteochondral loose body in the ankle joint. To our knowledge there are no reports in the literature of osteochondral loose bodies occurring in conjunction with an associated undisplaced talar neck fracture in either children or adults. The loose body was removed using anterior ankle arthroscopy. The child had an uneventful post operative recovery and regained full range of movement and function of his ankle joint and was discharged at one year follow-up. We aim to highlight the need to have a low threshold to further evaluate symptomatic children after fracture healing of an undisplaced talar neck fracture for a possible associated loose body in the ankle joint.

Core tip: Undisplaced talar neck fractures in children rarely present with an associated osteochondral loose body. If a child remains symptomatic after fracture healing we would advocate further evaluation with magnetic resonance imaging (MRI) scan to exclude an associated loose body. If a loose body or an osteochondral lesion is identified on MRI scan it can be safely treated with anterior ankle arthroscopy.

Fractures of the talus are rare in children. Skeletally immature bone is less brittle with higher elastic resistance than adult bone. The paediatric talus can therefore sustain higher forces before fractures occur[1].

The mechanism of injury is generally as a result of axial loading of the talus against the anterior tibia with the foot in dorsiflexion and usually follows high-energy trauma such as falls from height and road traffic collisions. However recently supination has also been considered as a mechanism of injury which due to impingement of the talus against the medial malleolus[2]. History and clinical examination in children can be challenging and plain radiographs may not necessarily demonstrate an obvious fracture or associated osteochondral defect (OCD)[3]. Time constraints, limited resources or failure to appreciate the nature of the injury can lead to failure of establishing correct diagnosis and follow up.

A five-year boy sustained an injury to his left ankle after jumping off a bunk bed whilst on holiday abroad. He was seen at the local hospital and his parents were told that the child had sustained a simple soft tissue injury following a normal plain radiograph of his ankle.

Upon his return to the United Kingdom he was brought to the local Emergency Department (ED) two days following his injury as he was still reluctant to bear weight through his left ankle and complained of increasing pain and swelling.

Radiographs revealed an undisplaced fracture of the talar neck (Figure 1A). The child was managed conservatively in a below knee cast and kept non-weight bearing for four weeks. 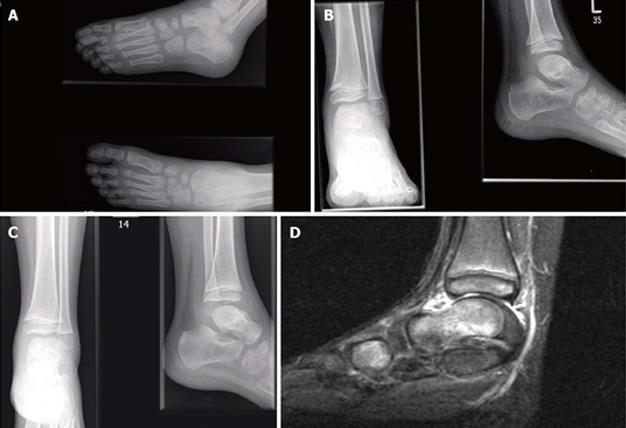 After four weeks his plaster was removed and clinical examination was satisfactory. Repeat radiographs taken showed a healing talar neck fracture (Figure 1B).

Three weeks later the child returned to the ED struggling with bearing weight after a trivial injury to his left ankle caused by jumping from a standing height. Although there was no obvious swelling around the ankle there was specific tenderness over the anterior aspect of the ankle joint. Radiographs were suggestive of an osteochondral loose body in the joint space between the tibia and talus (Figure 1C).

An magnetic resonance imaging (MRI) scan confirmed a 5.5 mm loose body antero-superiorly to the left talar dome and an OCD of the distal talar dome with a healed talar neck fracture (Figure 1D).

Following discussion with the child’s parents we elected to perform an arthroscopic removal of the osteochondral loose body. Arthroscopy was performed using a 2.7 mm wrist arthroscope. Intra-operatively a fibro-cartilage cap was found covering the OCD on the talar dome and therefore there was no need to perform microfracture.

One month after the procedure the child was pain free with no tenderness on palpation of the ankle joint. At final follow up one year after injury the child remained asymptomatic and radiographs revealed no progression of the osteochondral lesion or evidence of avascular necrosis (AVN).

The reported rate of avascular necrosis in children with non-displaced talus fractures is 16%. This is considerably higher than the reported rate in adults[4]. This suggests that the immature talus may be more prone to AVN. Rammelt et al[4] reported nearly half of all cases of AVN following an undisplaced talus fracture in a child occurred when the fracture had been initially missed.

The incidence of AVN following Hawkins Type III fractures of the talar neck (talar neck fracture with dislocations involving the subtalar and ankle joints) may approach 100%, particularly if diagnosis and reduction are delayed[5-7].

Most type I fractures can be treated closed unless there is loss of reduction. Hawkins’ original work in patients with a mean age of 30.4 years (8-63 years range) reported a less than 10 % association of AVN with type I  fractures[8].

Conservative management remains the mainstay of treatment of traumatic OCDs in children. Wester et al[10] reported a series of 13 cases which were followed up after 24 years. Eight cases had normal follow up CT scans and clinical findings. Two cases had a loose body in the ankle joint of which one had remained symptomatic since the time of injury although it was noted that the primary OCD had healed[10].

The role of ankle arthroscopy in the management of chronic and post-traumatic ankle disorders in adults is well established. Uglow and colleagues[11] reported outcomes in children following arthroscopy being comparable to adult series for the management of OCDs and anterolateral soft tissue impingement. In particular they highlighted the poor correlation between findings on MRI and intraoperative findings on arthroscopy especially in relation to small OCDs and impingements lesions.

An magnetic resonance imaging (MRI) scan confirmed a 5.5 mm loose body antero-superiorly to the left talar dome and an osteochondral defect of the distal talar dome with a healed talar neck fracture.

To the authors knowledge there are no reports in the literature of osteochondral loose bodies occurring in conjunction with an associated undisplaced talar neck fracture in either children or adults.

Undisplaced talar neck fractures in children rarely present with an associated osteochondral loose body. If a child remains symptomatic after fracture healing the authors would advocate further evaluation with an MRI scan to exclude an associated loose body.

This manuscript is suitable to be published.