Femoral artery pseudoaneurysms (FAPs) have been described following internal fixation of intertrocantheric, subtrocantheric and intracapsular femoral neck fractures as well as core decompression of the femoral head. The diagnosis of FAP is usually delayed because of non-specific clinical features like pain, haematoma, swelling, occasional fever and unexplained anaemia. Because of the insidious onset and of the possible delayed presentation of pseudoaneurysms, orthopaedic and trauma surgeons should be aware of this complication. We report a case of Profunda Femoris arterial branch pseudoaneurysm, diagnosed in a 40-year-old male 4 wk after revision with Kuntscher intramedullary nail of a femoral shaft nonunion. The diagnosis was achieved by computed tomography angiography and the lesion was effectively managed by endovascular repair. The specific literature and suggestions for treatment are discussed in the paper.

Core tip: Femoral artery pseudoaneurysms (FAPs) are a reported possible complication of intramedullary nailing for acute femoral shaft fractures. In this report we describe the delayed occurrence of a FAP after revision surgery for femoral shaft nonunion, its diagnosis and management by endovascular repair and discuss the pertinent findings in the medical literature.

A pseudoaneursym is a collection of blood leaking from a damaged arterial wall. The damage can be caused by traumatic or iatrogenic perforations. Femoral artery pseudoaneurysms (FAPs) have been described to arise after different surgical procedures, including internal fixation of intertrocantheric, subtrocantheric and intracapsular femoral neck fractures, intramedullary nailing of femur, core decompression of femoral head for osteonecrosis and revision total hip arthroplasty[1-4].

Because of the insidious onset and possible delayed presentation of FAPs, orthopaedic and trauma surgeons should be aware of this complication. FAPs may close spontaneously if the tear is small enough to allow for clotting and sealing. On the other hand, rupture of the aneurysm can trigger thrombosis, distal embolization and compression of adjacent structures. Compartment syndrome of the tigh has also been observed after formation of a pseudoaneurysm of the femoral artery or of its branches[1].

As far as treatment is concerned, small-sized FAPs can be managed by coil or balloon embolisation, stent graft repair, transducer-directed compression and other percutaneous or endoluminal treatments[2].

We report a case of a profunda femoris arterial branch pseudoaneurysm, diagnosed in a 40-year-old male 4 wk after revision with Kuntscher intramedullary nail for a femoral shaft nonunion.

To the best of our knowledge this is the first report of femoral pseudoaneurysm occurring after intramedullary nailing for nonunion of the femoral shaft.

A 40-year-old male cyclist in good health was involved in a collision with a car that was travelling at 45 miles (65 km) per hour. He sustained an isolated, closed femoral shaft fracture. There were no concomitant abdominal or thoracic injuries. His Injury Severity Score was 9. On X-rays he showed a type 32-A2 fracture according to the AO-ASIF classification[5].

The patient consented to have surgical treatment in the form of unreamed intramedullary nailing (T2 Femur Nail, Stryker Trauma). This was done on the day of injury. There were no reported intraoperative complications. Postoperative radiographs revealed a minimum gap between the proximal and distal fragments. The patient was discharged 4 d after surgery with progressive weight bearing on a assisted rehabilitation protocol. He obtained a complete range of motion after 1 wk and full weight bering after 1 mo, but he complained of a degree of pain during ambulation.

X-rays at 8 mo follow-up revealed nonunion (Figure 1A). After consulting the patient, a revision with intramedullary exchange nailing was planned with reamed insertion. This involved the removal of a previously placed implant and reaming the medullary canal to a larger diameter. The diameter of the new nail (Kuntscher Nail, Stryker Trauma) was 2 mm larger than that of the previous nail and the intramedullary canal was over-reamed by 1 mm more than the diameter of the new nail. Postoperatively, the hemoglobin level never fell down under 9.0 g/dL, without any signs and symptoms of hypovolemia.

Figure 1 X-ray appearance of pseudoaneurysm. A: Anteroposterior and lateral radiograph of femoral shaft nonunion 8 mo after interlocking IM nailing; B: An ovoid, soft tissue mass behind the fracture site is visible 1 mo after exchange nailing.

Four weeks after surgery, a tender swelling over the medial thigh was noted, and radiographs revealed an ovoid soft tissue mass behind the fracture site (Figure 1B). A residual hematoma (confirmed by duplex ultrasound) was diagnosed, and observation was recommended based on intact distal pulses and neurological function.

However, 3 wk later the enlargement of the mass had continued and associated pulsatile swelling was noticed. A pseudoaneurysm instead of a simple hematoma was suspected. Further investigation, including computer tomographic angiography, confirmed a lesion originating from a profunda femoris arterial branch adjacent to the fracture site (Figure 2). 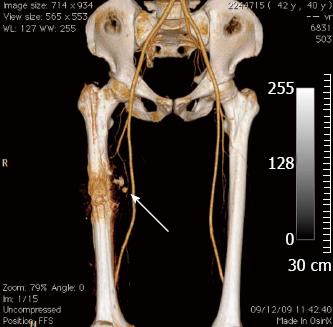 The patient was therefore referred to an Interventional Radiology department. An angiogram confirmed a rapidly enhancing pseudoaneurysm sac arising from a branch of the right profunda femoris artery. Using a microcatheter, the segmental branch feeding the pseudoaneurysm was selectively cannulated (Figure 3A) and a total of five microcoils (3 mm × 3 cm) were deployed in the vessel distally and proximally to the pseudoaneurysm neck. After embolisation, a control angiogram showed satisfactory hemostasis with occlusion of the feeding vessel, no further filling of the pseudoaneurysm, and no extravasation of contrast (Figure 3B). The compressive discomforts were quickly relieved. 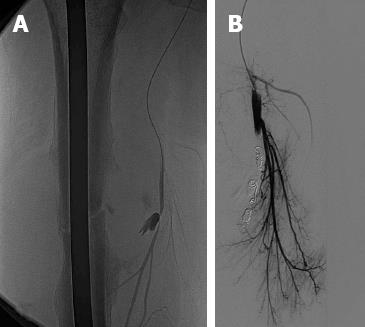 Over the next 6 mo, intact neurovascular status without recurrent painful swelling or reported complications were observed. No additional complications arose during follow-up. The femoral shaft nonunion healed at 6 mo follow-up (Figure 4). 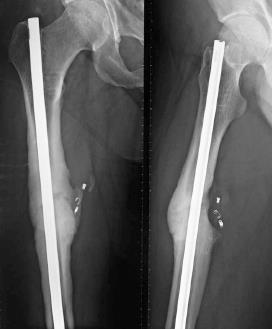 There are different causes of FAP caused by orthopaedic procedures reported in the literature. Arterial damage can occur because of bone spikes, screws, drills, displaced implants and retraction of surrounding tissues[6]. Others reports stress the point that locking screws are potential causes of FAPs in case of penetration of inner cortex[7]. The most likely cause of the pseudoaneurysm seen in this case report was over penetration of the drill bit during the intramedullary exchange nailing with reamed insertion. The drilling probably injuried the arterial wall with subsequent external hemorrhage.

Early diagnosis of a pseudoaneurysm of the femoral artery or one of its banches can be done if non-specific clinical signs are evaluated and any swelling over the medial aspect of the proximal thigh is investigated properly. However, these findings may be normal when the injury only involves a minor vessel.

The time frame necessary to detect traumatic pseudoaneurysms varies from hours to years depending on the involved region and clinical signs. Clinical manifestations include an enlarging pulsatile swelling, audible bruit, palpable thrill, pain, edema and compressive neuropathy. Without a clear history of trauma, the lesion may mimic some soft tissue conditions like abscesses or neoplasms. Because of the presence of heat and tenderness in the surrounding area, the inflammation during the organisation of the hematoma may appear as a postoperative infection[8]. Therefore, a high index of suspicion and radiological imaging [particularly computed tomography (CT) angiography and duplex ultrasonography] plays a major role in obtaining a diagnosis. Multidetector CT angiography enables 3-dimensional reformatting of the lower limb vasculature. Although the image quality can be impaired by metallic implants, it is a quick and non-invasive method, with high sensitivity (90%-95%) and specificity (98%-100%) for detecting arterial injury after trauma[9].

The management of pseudoaneurysms depends mostly on their location and size. Small asymptomatic lesions or those involving non-critical vessels may be observed for 4-6 wk to detect possible spontaneous recovery. However, active intervention is indicated in larger (> 3 cm) symptomatic lesions. Current therapeutic approaches include open surgical repair, ultrasound-guided compression, ultrasound-guided thrombin injection and endovascular repair using coil embolization or stent-graft insertion as seen in this case.

In conclusion, to the best of our knowledge this is the first report of a delayed pseudoaneurysm caused by drilling during a revision intramedullay nailing for femoral shaft nonunion. Therefore, a pseudoaneurysm should be suspected not only in fracture cases, but also in revisions of nonunions. Due to the rarity of the condition, in case of suspicion the early use of CT angiography is highly recommended. Endovascular repair is an effective minimally invasive treatment for delayed pseudoaneurysms of the femoral artery.