Primary hepatic gastrinoma is a very rare ectopic gastrinoma with less than 20 cases reported worldwide. We report the case of a patient with hypergastrinemia who was subjected to exhaustive preoperative and intraoperative imaging and also careful surgical exploration of the duodenum and pancreas which failed initially to identify the primary tumour. Eventually the patient was subjected to left liver lobectomy, as a small palpable lesion was noted intraoperatively. The diagnosis of gastrinoma requires a high index of clinical suspicion and the flawless cooperation of many specialties.

Zollinger-ellison syndrome (ZES) was first described in 1955 as a constellation of findings, which included: refractory peptic ulceration, gastric acid hypersecretion, diarrhea, and a non-β islet cell tumor of the pancreas[1]. It was later confirmed that the islet cell tumor secreted peptide hormone gastrin and was the cause of ZES. The vast majority of gastrinomas are found in what has been referred to as the gastrinoma triangle. This is an imaginary anatomic region defined by the confluence of cystichepatic duct junction superiorly, the junction of the neck and body of pancreas medially and the junction of the 2nd and 3rd part of the duodenum inferiorly. Gastrinomas that arise away from this triangle are very rare[2,3].

We present the case of a 56 year old patient with hypergastrinemia who underwent exploratory laparotomy and curative resection for primary hepatic gastrinoma.

A 56-year-old male was referred because of a history of recurrent upper gastrointestinal haemorrhage and a high serum gastrin level. The patient had persistent heartburn and acid regurgitation for 16 years. Several oesophagogastroduodenoscopies (OGDs) revealed diffuse erosive oesophagitis and initially the presence of Helicobacter pylori (H. pylori). At the age of 46, after various eradication regimens against H. pylori, he was subjected to truncal vagotomy and Billroth II gastrojejunostomy followed by long term prophylactic antisecretory treatment. At that time, gastrin levels were measured at 375 pg/mL (upper normal limit 80 pg/mL) and the Octreoscan test was negative for gastrinoma. Therefore, his hypergastrinemia was attributed to his antisecretory treatment. At the age of 52 he had the first episode of upper gastrointestinal bleeding. OGD indicated four anastomotic ulcers plus a bleeding duodenal ulcer with negative IgG antibodies against H. pylori and negative Campylobacter-like organism test. Three years later he had a new episode of upper gastrointestinal bleeding that necessitated transfusion of 4 blood units. Last year his gastrin levels were measured at 1688 pg/mL, which are pathognomonic of gastrinoma.

Abdominal ultrasonography (US) revealed hepatic steatosis and a hypoechoic lesion in the left liver lobe. No other abdominal pathological condition was found. A computed tomography (CT) scan of the abdomen showed intrahepatic dilatation of the biliary tree in the left liver lobe. No lesion was detected. Similarly, the magnetic resonance imaging (MRI) and magnetic resonance cholangiopancreatography (MRCP) that followed (Figure 1) revealed dilatation of the left lobe biliary tree, but still no lesion was evident. The endoscopic ultrasound (EUS) did not reveal any tumor in the pancreas, duodenum or neighboring lymph nodes. The somatostatin receptor scintigraphy (SRS) using 111In-DTPA-D-Phe1-octreotide (Octreoscan®, Mallinckrodt, Petten, The Netherlands) indicated increased uptake of radiotracer close to the left liver lobe (Figure 2). 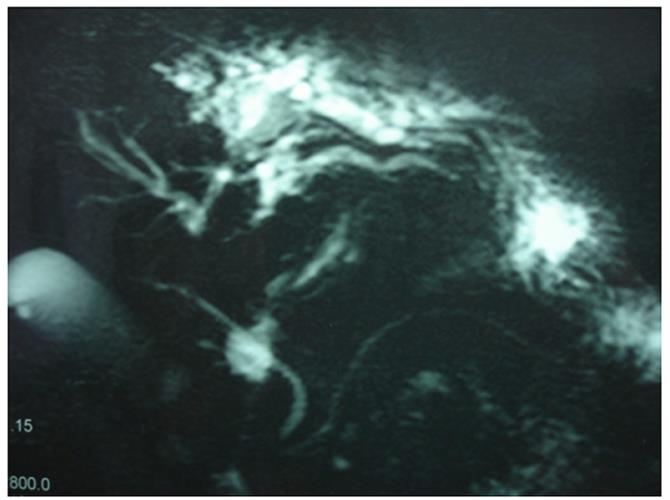 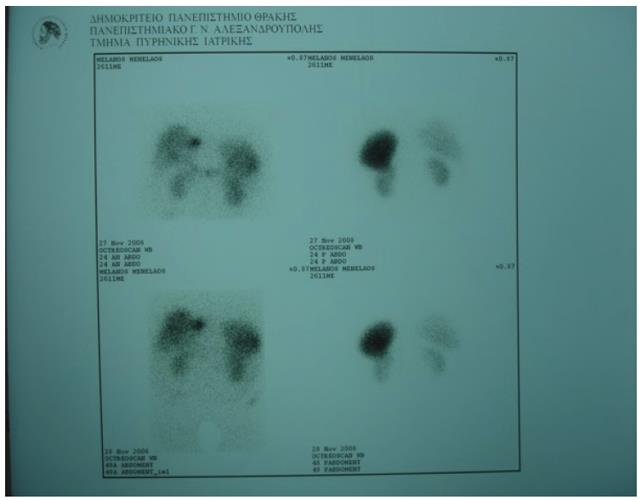 The patient underwent an exploratory laparotomy. We explored the gastrinoma triangle using intraoperative ultrasound (IOUS) and specimens from the head of the pancreas and from the neighboring lymph nodes were sent for frozen sectioning. All came back normal. However a small lesion (~1 cm) was palpable at the left liver lobe (segment III) and therefore we performed a left lobectomy (segments II and III).

Pathological analysis showed compact groups of large neoplastic cells with granular eosinophilic cytoplasm and large atypical nuclei with inclusions. The cells were arranged in an insular pattern with angiofibrotic septa. (Figure 3A) Immunohistochemical (IHC) stains were positive for tumor markers such as chromogranin A (Figure 3B), cytokeratin (AE1-AE3), Neuron Specific Enolase (NSE), synaptophysin, gastrin (Figure 3C) and HepPar1. Proliferative activity was estimated with 15% Ki67-positive tumor cell nuclei (Figure 3D). The final diagnosis was a neuroendocrine tumor that fell in the gastrinoma category. 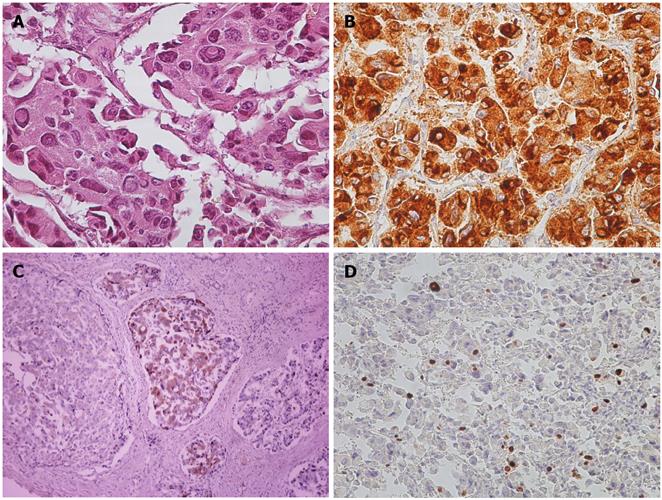 Twenty months postoperatively, the patient is asymptomatic and his blood gastrin levels remain within the normal range (19 pg/mL).

Gastrin-producing tumors are the most frequent pancreatic endocrine tumors, with an incidence of 0.5-1.5 new cases/106 people/yr[4] and are responsible for the ZES. More than 80% of gastrinomas are located in the gastrinoma triangle[5]. The vast majority of tumors are found in this pancreatic head-duodenal area, mainly in the duodenal submucosa (40%-50%), the head of the pancreas (30%-50%) or in the neighboring lymph nodes (19%)[2]. Ectopic gastrinomas are rare (< 5%) and have been reported in the stomach, ovaries, omentum, kidneys, lymph nodes, jejunum, esophagus, extrahepatic biliary tree, and liver[6-15]. The latter has been reported in fewer than 20 cases[16,17]. As the liver is a very common site of metastases from gastrinoma, the differential diagnosis of primary hepatic gastrinomas can be difficult. Primary hepatic gastrinomas seem to occur in slightly younger patients compared to patients with other ZES tumors, show a predilection for male patients and have not been associated with multiple endocrine neoplasia type 1 (MEN-1)[18]. In approximately 75% of patients with ZES a single tumor (sporadic gastrinoma) is responsible for their symptoms, whereas in 25% of patients diagnosed with ZES, patients will have gastrinomas (often multiple) in the setting of the MEN-1 syndrome[6].

To make the diagnosis of gastrinoma a high index of suspicion is required. Findings may include recurrent H. pylori-negative peptic ulcers or peptic ulcers associated with complications (bleeding, perforation), chronic diarrhea, ulcers at a young age, family history of ulcers or MEN-1 syndrome[19].

Gastrinomas can have either a benign or malignant course, but even those that are malignant seem to be slow-growing tumors. Approximately 65% of gastrinomas are malignant and up to 30%-40% of patients will have evident metastatic disease at initial presentation. Malignancy cannot be established cytologically, but is determined by invasion of contiguous structures, the presence of vascular or lymphatic invasion, or most definitively by the presence of metastases at various locations, including lymph nodes, liver, and bone[6].

CT scan, MRI, and US are widely used during the initial evaluation and are excellent for visualization of larger tumors (> 1-2cm) and metastatic disease. OGD and EUS are often used to assess the upper gastrointestinal tract with pancreas and biliary tree. In recent years, the Octreoscan/SRS has successfully localized neuroendocrine tumors (primary or nodal metastases) in up to 78%-86% of cases, and is quickly becoming the imaging modality of choice for the diagnosis of patients with suspected gastrinomas[20]and, in our opinion, it should always be requested. Selective arterial secretin injection with hepatic vein sampling for gastrin, as described by Imamura et al[21], is helpful in regionalizing disease to the gastrinoma triangle or pancreatic body/tail, especially preoperatively[6]. However, imaging studies often detect regional nodal disease rather than the primary itself, although the location of regional disease can often lead the surgeon to the primary site (e.g. duodenum). The IOUS is a modality that can assist the surgeon to detect a small sized lesion, as current transducer resolution permits the detection of 2 mm lesions[22]. If preoperative imaging studies fail to detect any lesion, the use of IOUS should be seriously considered.

At the time of diagnosis our patient presented with symptoms suggestive of severe peptic ulcer disease due to gastric hyperacidity, along with extremely high serum levels of gastrin (> 1000 pg/mL), which are almost pathognomonic of the gastrinoma syndrome[23]. A careful search for MEN-1 was performed, as its presence would have changed the therapeutic approach. Exhaustive preoperative and intraoperative imaging and also careful surgical exploration of the duodenum and pancreas failed to identify the primary tumor.

Surgical resection is the treatment of choice and is the only chance for cure with a reported respectability rate up to 86% in the literature, and eugastrinemia in up to 60% post-operatively, 40% at 5 years, and 34% at 10 years[24-26]. Norton et al recommend surgical exploration of all ZES patients with resectable and sporadic disease as it has been shown to increase overall disease-related survival[27]. Adjuvant therapy following complete resection (R0) provides no survival benefit. Orthotopic liver transplantation is an option when the locoregional disease is controlled[6,28].

Alternative therapies such as radiofrequency ablation, chemotherapy (doxorubicin, streptozocin, 5-fluorouracil), interferon, transplantation, and angiographic chemoembolization can be utilized, when there is no place for surgery due to diffuse disease or medical comorbidities[6,7,28,29,30]. Although chemotherapy can suppress progression of disease, gastrinomas can be resistant to conventional therapy with limited availability for second line treatment options. This has sparked interest in the use of molecular targeted therapy, utilizing VEGF, mTOR, and tyrosine kinase inhibitors[31,32]. Recently, treatment strategies include the use of peptide inhibitors that have been designed with a high affinity for receptors that may be overexpressed by neuroendocrine tumors. Radiolabeled somatostatin analogs (octreotide) are being employed for both imaging and radiotherapy[33].

In conclusion, primary hepatic gastrinomas are immensely rare. Diagnosis requires a high index of clinical suspicion and the flawless cooperation of many specialities including gastroenterologists, radiologists, surgeons and pathologists. The numbers are small and follow-up is limited. There is no standardized surgical approach when dealing with extrapancreatic extraintestinal gastrinomas. Surgical resection remains the only chance for cure.