Occasionally systemic complications with high risk of death, such as multiple organ dysfunction syndrome (MODS), can occur following multiple bee stings. This case study reports a patient who presented with MODS, i.e., acute kidney injury, hepatic and cardiac dysfunction, after multiple bee stings. The standard clinical findings were then correlated with magnetic resonance imaging (MRI) findings, which demonstrates that MRI may be utilized as a simpler tool to use than other multiple diagnostics.

Core tip: Multiple bee stings can cause multiple organ dysfunction and lead to a clinical picture that can be accurately depicted by magnetic resonance imaging alone, which thus prevents several imaging tests being administered for evaluating the extent and range of the disease.

Cases of multiple bee stings are reported from all parts of the world as accidents or after occupational exposure, especially in rural areas[1]. Sting may result in a wide range of clinical spectra ranging from localized pain to systemic anaphylaxis reactions, organ dysfunction and multiple organ failure[2]. Bee venom contains histamine-like active amines, serotonin, quinines, phospholipase A2, hyaluronidase, melittin, and apamin[3,4] which have hemolytic, neurotoxic, and vasoactive characteristics that may cause intravascular hemolysis and rhabdomyolysis as well as other rare severe conditions like myocardial necrosis and infarction, centrilobular necrosis of the liver, and thrombocytopenia due to direct platelet toxicity[3,5,6]. Herein presented is a case of multiple organ dysfunction secondary to multiple bee stings, which has a clinical picture correlating with magnetic resonance imaging (MRI) findings.

She received alternate-day hemodialysis for two weeks. During this period, her urine output improved gradually, and she became dialysis independent. At the time of discharge, her serum creatinine had stabilized at 88.00 μmol/L.

Ultrasonography of the kidneys showed bilaterally hypoechoic enlarged kidneys. Chest X-ray revealed bilateral pleural effusion, along with an enlarged one dimensional cardio-thoracic ratio (Figure 1) demonstrating the enlargement of the heart. Head CT was normal. The patient also underwent abdominal MRI, obtaining images in the axial and coronal planes using both T1 and T2 weighted images. The Periodically Rotated Overlapping Parallel Lines with Enhanced Reconstruction (PROPELLER) sequence was used for T2 weighted images, and in and out-of-phase Axial LAVA Flex sequences were used for T1 weighted images. The bilaterally enlarged kidneys with loss of cortico-medullary differentiation were seen on the T2 weighted images (Figure 2). Septal thickening in the perinephric space along with anterior, posterior renal and lateral conal fascia thickening was also noted (Figure 2). Fluid collection in the peritoneal space around the liver and bilateral plural space was evident. Soft tissues around the peritoneal and pelvic cavity showed increased signal on T2 weighted image (Figure 2). Low signal intensity was seen in the splenic parenchyma on LAVA-Flex in-phase sequences as compared to out-phase image (Figure 3). On PROPELLER T2 weighted image the spleen, as well as liver signal intensity was decreased as compared to para-spinal muscle. This represented an iron overload (Figure 4). 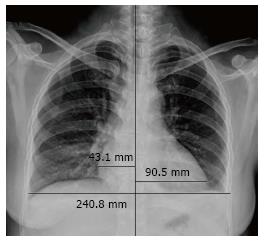 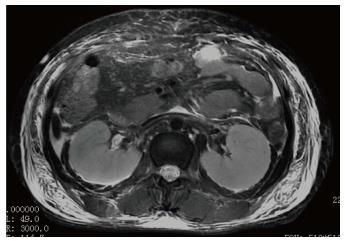 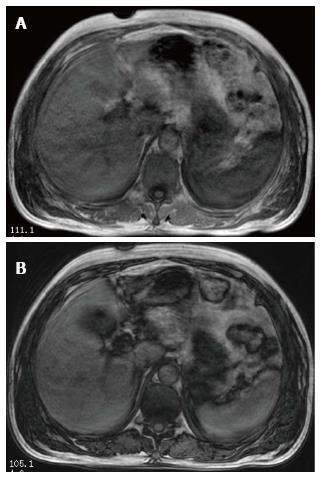 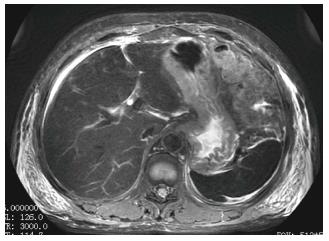 Figure 4 Axial Fat Suppressed T2 Weighted Periodically Rotated Overlapping Parallel Lines with Enhanced Reconstruction FSE image of the abdomen shows decreased signal intensity of the spleen as well as the liver as compared to that of paraspinal muscle.
DISCUSSION

It was evident from the hematological and biochemical markers observed in the patient that multiple organ dysfunction was secondary to rhabdomyolysis and hemolysis. The MRI findings were accurately concordant with the clinical picture.

The sensitivity of MRI in detecting abnormal muscles is higher than that of CT or ultrasound (100%, 62% and 42%, respectively)[7-9]. While the affected muscles show an increased signal intensity on T2 weighted spin echo images and decreased signal intensity on T1 weighted images[7,8,10], STIR images display good contrast between normal and abnormal muscles and better differentiation of the damaged muscles from the adjacent fat due to its fat suppression (at our hospital, ROPELLER sequence T2 is used to measure fat suppression). At the same time, gradient-echo images are helpful in the detection of hemosiderotic rests in case of hemorrhagic transformation, not in the acute stage, but in chronic long standing disease[11]. Kakuda et al[12] described that gadolinium enhanced post-contrast T1 weighted imaging demonstrated lesions more definitively than T2 weighted imaging in the chronic phase of rhabdomyolysis.

During the last decade, MRI techniques have been developed which allow safe, noninvasive detection and quantitation of iron in body tissues such as the liver, heart, pancreas, and spleen. MRI-based methods for assessing iron overload can be classified into: (1) relaxometry methods measuring absolute T2; (2) relaxometry methods measuring T2*, which is also an absolute value but measured with gradient echo sequences; and (3) signal intensity ratio measurement; where methods A and B show low signal intensity of organs overloaded with iron, and method C measures signal intensity ratio between the iron deposited organs and other tissues in which iron is not generally deposited, usually in the paraspinal muscles[14]. Myoglobin, an iron-containing protein that is released from muscle into the circulation in rhabdomyolysis, is metabolized by the liver and spleen[15], and thus is deposited on them as a result of an overload. In our patient, while LAVA Flex T1 weighted in-phase image showed decreased splenic signal as compared to LAVA Flex T1 weighted out-phase image (Figure 3), the liver signal intensity was decreased on PROPELLER T2 weighted images as compared to its signal intensity with para-spinal muscles (Figure 4). These findings correlated with iron deposition in these organs secondary to hemolysis as evident by the hematological tests.

Cardiac MRI (CMRI) has emerged as a sensitive modality for confirming the myocarditis as well as differentiating acute from chronic. CMRI includes several techniques that can be used in various combinations to assess left ventricular (LV) functional parameters, morphology, myocardial perfusion, and myocardial disorders within one examination[16,17]. In our patient, cardiac dysfunction was confirmed by elevated cardiac enzymes. Apart from chest radiography, neither CMRI nor echocardiography was performed. Chest radiography showed enlargement of the cardio-thoracic ratio which could be due to LV wall thickening secondary to acute myocarditis. Left ventricular hypertrophy can be ruled out when considering the patient’s negative history of long term hypertension. Moreover, Hiramitsu et al[18] in their study described 25 cases of biopsy proven acute myocarditis with transient thickening of both the interventricular septum and left ventricular wall which was associated with the presence of histologically confirmed interstitial edema. CMR T2-weighted images are sensitive in detecting interstitial edema[17].

Thus, from the presented case, it is concluded that MRI is to be a preferable imaging modality for assessing a patient who presents with multiple organ dysfunction. The MRI only requires one setup, thereby avoiding several imaging procedures which would expose the patient to unnecessary radiation and inconvenience in order to get a clear picture of the extent of the disease.

A 56-year-old female with a history of multiple bee stings presented with mild swelling and pain over the stung area.

Multiple bee stings along with progressive decrease in urine output and hypertension.

Magnetic resonance imaging (MRI) showed bilaterally enlarged kidneys with loss of cortico-medullary differentiation, and iron overload in the liver parenchyma with increased signal intensity of the muscles and soft tissues around the peritoneal and pelvic cavity on T2 weighted image.

The case report shows that MR findings are concordant with lab findings and can be preferably used as a single imaging modality to assess multiple organ dysfunction syndrome.

It is a well written study for a patient who presented with multiple organ dysfunction syndrome, after multiple bee bites, with acute kidney injury, hepatic and cardiac dysfunction, and had clinical findings correlating with MRI findings.