AIM: To evaluate the effects of using CO2 as negative contrast agent in decreasing the overlapping on the pancreaticobiliary system from intestinal fluids.

CONCLUSION: MRCP with carbon dioxide as negative contrast agent would decrease intestinal fluids in the gastric antrum and duodenal bulb, thereby decreasing overlapping with the CBD.

Magnetic resonance cholangiopancreatography (MRCP) is a safe and noninvasive technique used to evaluate the pancreaticobiliary system[1-3]. With the use of thin-section single-shot fast-spin echo sequences and thick-section heavily T2-weighted sequences, MRCP can demonstrate the anatomy of the biliary tract, pancreatic duct (PD) and gallbladder, since the fluid within them serves as an intrinsic contrast medium[4]. However, high signal intensity from intestinal fluids would decrease the quality of MRCP images due to superimposition with the biliary tract[4-6]. Therefore, how to decrease the high signal intensity from intestinal fluids has always been problematic for radiologists.

Previous researchers have used oral negative contrast agents (including blueberry and pineapple juices) to suppress the high signal of the gastrointestinal tract[4,7-9]. Although blueberry juice has been shown to be a well-tolerated and effective oral contrast agent during MRCP, pure blueberry juice is not widely available. Pineapple juice is another negative contrast medium. However, the patient has to take the 400 mL of pineapple juice 15 to 30 min before MRCP is performed, thereby limiting its clinical usage. A potential risk of loss of signal intensity of the common bile duct (CBD) caused by reflux of oral negative contrast medium agent in patients with a history of endoscopic sphincterotomy has also been reported[10].

Based on the experience of upper gastrointestinal series, we understand that CO2 accumulates in the gastric antrum after gas-producing crystals are taken. This phenomenon will cause intestinal fluids to be retained in the gastric fundus and therefore decrease the overlapping with the CBD. There are also several advantages to using CO2 as the negative contrast medium: it is widely available, inexpensive and easily prepared. To our knowledge, this is the first study using CO2 as negative contrast agent for MRCP in the literature.

The purpose of our study was to evaluate the effects of using CO2 as a negative contrast medium in decreasing the overlapping of intestinal fluids on the pancreaticobiliary system.

From October 2007 to September 2008, a total of 117 consecutive patients (70 men, 47 women; age range, 20-82 years; mean age, 58 years), who met the inclusion criteria, were enrolled in our study. Patients were included if they were referred for evaluation of biliary tract problems. We excluded patients if they had had cholecystectomy or gastric surgery, or were unable to take gas-producing crystals. The Institutional Review Board of our hospital approved the study. Written informed consent was obtained from each patient after the purpose and protocol of the study had been fully explained.

Differences between the two groups of data were assessed with χ2 test. The analyses were performed by using SPSS software (SPSS for Windows, version 11.0, 2001; SPSS, Chicago, Ill). A P value of less than 0.05 was considered to indicate a statistically significant difference for all analyses. 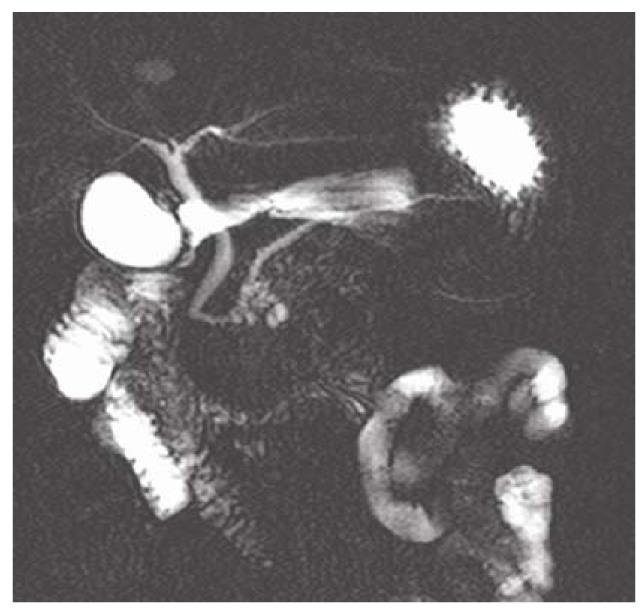 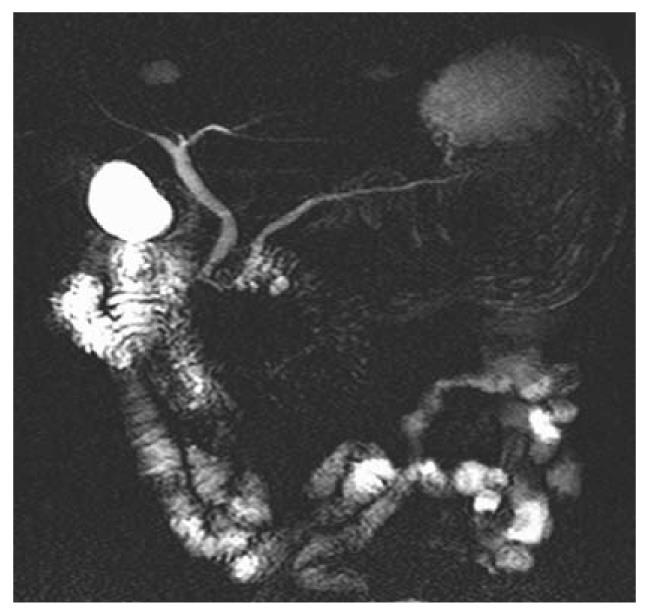 Figure 2 Magnetic resonance cholangiopancreatography image with CO2 in a 60-year-old woman shows how the decreased hyperintense intestinal fluids in the gastric antrum and duodenal bulb do not overlap the common bile duct.
DISCUSSION

MRCP is a safe and noninvasive technique used to evaluate the pancreaticobiliary system[1-3,11]. It allows obtaining images of the pancreaticobiliary similar to the endoscopic retrograde pancreatography (ERCP) without the morbidity associated with the complications resulting from diagnostic ERCP[12-14]. Although MRCP has been shown to be accurate in the diagnosis of choledocholithiasis, malignant biliary obstruction and other congenital biliary tract anomalies, awareness of several potential pitfalls is crucial to avoid inappropriate interpretation[6]. High signal intensity from the intestinal fluids superimposed on the biliary tract is one of the pitfalls that interfere with the interpretation (Figure 1).

All these disadvantages led us to look for a more suitable contrast agent for MRCP that might be widely available and timesaving.

In this study, we used carbon dioxide (CO2) as negative contrast medium produced by administering gas-producing crystals orally. There are several advantages using CO2 as a negative contrast medium: it is widely available, inexpensive and easily prepared. After taking oral gas-producing crystals, the CO2 will accumulate in the gastric antrum and duodenal bulb, because these areas are located upward during the supine position. The gastric antrum and duodenal bulb are also, anatomically, the nearest areas to the CBD and the PD. Therefore, the negative contrast medium effects caused by CO2 in these areas will not influence the high signal intensity at the level of the CBD and the PD during the MRCP, thereby improving the MRCP diagnostic value.

Our study has limitations. Firstly, although gas-producing crystals can produce carbon dioxide in the stomach, there were still 22 (41.5%) subjects in our study whose MRCP images were characterized by an insufficient amount of air. The possible reason was the fact of having taken just one pack of gas-producing crystals. This would have been improved simply by taking another pack. However, some patients might feel uncomfortable about the smell of the gas-producing crystals and hesitate to take another pack. Secondly, some patients took the gas-producing crystals too slowly, which may negatively influence the desired effects. This problem may be overcome by assuming the crystals faster. However, the physician should be aware of possible complications, such as choking. For those patients with nasogastric tube placement, the oral gas-producing crystal method could be replaced by manually injected air from the nasogastric tube. Thirdly, some patients had hiccups after they took the crystals. This would undoubtedly influence the results of the MRCP. Lastly, the CO2 might enter the papilla of Vater in patients with incompetent papilla. This would subsequently lead to pneumobilia which may mimic choledocholithiasis[6].

In conclusion, MRCP with carbon dioxide as negative contrast medium may decrease intestinal fluids in gastric antrum and duodenum, thereby decreasing their overlapping with the CBD.

MR cholangiopancreatography (MRCP) is a useful and noninvasive method to evaluate the normal anatomy and various pathologies of the pancreaticobiliary system. However, bile within the common bile duct (CBD) serving as an intrinsic bright contrast medium could be superimposed by hyperintensity from intestinal fluids on MRCP.

Several oral negative contrast agents (such as blueberry and pineapple juices) have been used to decrease the hyperintensity from intestinal fluids.

Carbon dioxide, a widely available, inexpensive and easily prepared contrast agent, used as a negative contrast agent during MRCP would accumulate in the gastric antrum, displace the intestinal fluids into the gastric fundus and therefore decrease the overlap with the CBD. This would greatly improve the diagnostic value of MRCP.

Administration of carbon dioxide as a negative contrast agent for MRCP is a practical method to decrease the overlap of intestinal fluids on the CBD.

The manuscript addressed a novel procedure to improve the visualization of CBD or pancreatic duct during MRCP.