Pneumatosis intestinalis and portomesenteric vein gas are rare and potentially severe radiological findings that occur both in pediatric and adult populations. They actually are radiographic signs of underlying intra-abdominal pathology, abnormality or diagnostic medical interference. If combined with other radiological or clinical signs of intestinal ischemia or sepsis, the prognosis is dismal and urgent laparotomy is mandatory. We report two cases of surgical treatment with ominous outcome in an effort to characterize this finding correctly as an absolute surgical indication or as an additional diagnostic criterion that simply marks a further breakdown of the systems in patients with a long list of severe medical conditions.

Pneumatosis is characterized by collections of gas within the wall of the bowel, which might involve the esophagus, stomach, small intestine, and colon[1]. When localized in the small intestine or the portomesenteric vein system, it is characterized as pneumatosis intestinalis (PI) or portomesenteric vein gas (PVG), respectively. PVG can be seen in conjunction with or in isolation from PI, and represents a different phase of the same fundamental pathophysiology. In PVG, branching lucencies are seen within the mesenteric venous tributaries or in the liver, which often drain sites of PI[2].

There are two main theories that explain the pathophysiology of PI/PVG: mechanical and bacterial[3]. The mechanical theory supports the hypothesis that PI develops when defects in the mucosa, in combination with increased intraluminal pressure, allow gas to infiltrate the gastrointestinal (GI) tract wall. The bacterial theory postulates that PI develops when gas-producing bacteria gain entry to the GI tract wall and produce pockets of gas. Much of the evidence for these two theories is derived from observational studies and one could argue that the mechanical and bacterial mechanisms could occur simultaneously[4].

The underlying pathological mechanism is most often associated with intestinal obstruction (e.g. diverticulitis, adhesions, feeding tubes, tumor, or radiation enteritis), mesenteric ischemia due to thrombosis or emboli (e.g. mesenteric infarction, or necrotizing enterocolitis in infants), or volvulus[5], but also with benign or idiopathic conditions (e.g. endoscopic examination, or liver cirrhosis)[6].

Diagnostically, computed tomography (CT) can identify PI/PVG in such patients. With the added sensitivity and increased utilization of modern CT, PI and PVG are being identified more frequently. This poses a difficult clinical question because the clinical significance of PI and PVG, identified by modern CT, ranges from benign to catastrophic[7]. Historically, their presence has mandated laparotomy due to the high mortality rate associated with mesenteric ischemia, but practically, surgical treatment should always be considered in symptomatic patients[8].

We report herein the surgical treatment of obstructive and ischemic abdominal pathology, accompanied by this unusual radiological finding, with a lethal outcome. The progression of the patients’ histories according to our experience and the study of the limited number of case series in the international literature led us to useful conclusions on the appropriate treatment of such patients.

A 70-year-old woman with amyotrophic lateral sclerosis (Lou Ghering’s disease) and chronic kidney failure presented with abdominal distension. As a result of neuromuscular malfunctions, she had received feeding jejunostomy 3 mo previously, as well as a permanent tracheostoma. The patient presented a backflow from the jejunostomy, and clinical signs of mechanical obstruction, ileus and fever. Initial laboratory findings showed elevated inflammatory parameters and serum lactate levels. When the abdominal symptoms progressed, contrast-enhanced CT revealed distinct pneumatosis within the jejunal wall and fulminant gas embolism in the portal vein system (Figures 1 and 2). An exploratory laparotomy was carried out due to suspected intestinal ischemia. No signs of mesenteric ischemia or a necrotic process were found, but only adhesions that underwent lysis (Figure 3). Although, the abdominal tenderness receded, the inflammatory laboratory findings were still elevated along with increased procalcitonin and positive blood cultures. The patient died on the 10th postoperative day from manifest disseminated intravascular coagulation and multiple organ failure (MOF) due to sepsis. 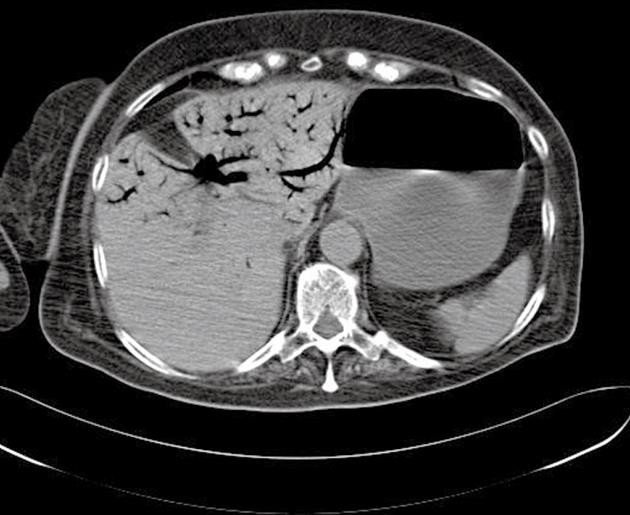 Figure 1 Fulminant presence of intrahepatic portal vein gas, especially in the left lobe of the liver. 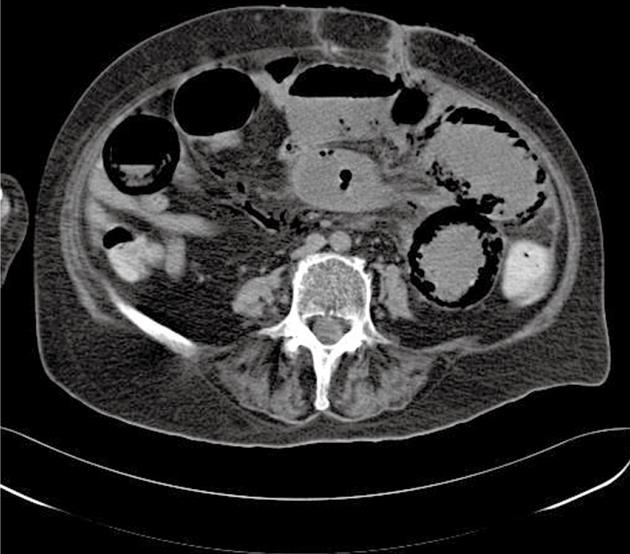 Figure 2 Presence of gas in the intestinal wall.

Figure 3 Perioperative image of the distended but not ischemic small bowel.

The second patient was an 80-year-old man suffering from chronic kidney failure, with a history of treated abdominal aorta aneurysm, who was in hospital because of acute abdominal pain, severe gas, feces retention, and bloating. The clinical symptoms and the laboratory and radiological findings (PVG and PI) (Figure 4) aroused suspicion of intestinal ischemia. An emergency laparotomy was carried out and 50 cm of ischemic terminal ileum were resected. The patient died on the 22nd postoperative day due to severe sepsis and MOF, and during the whole period, fever, elevated inflammatory markers, and positive blood cultures were present. 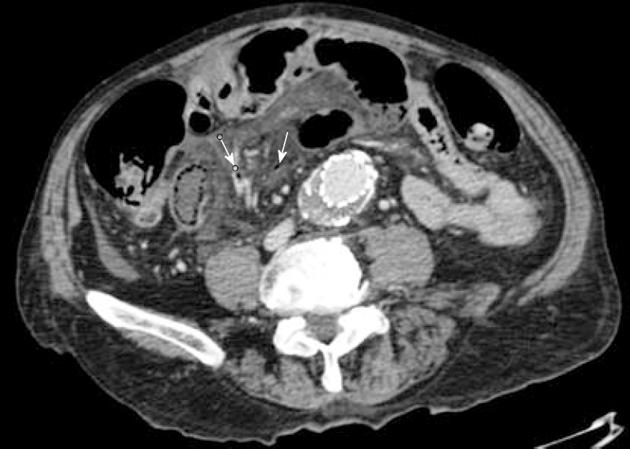 Figure 4 Gas in the intestinal wall and mesenteric veins (arrows).

In both cases the radiological phenomenon showed a significant regression after surgical treatment of the primary underlying pathology, along with the patients’ symptoms. However, the prognosis and outcome of the patients remained ominous. This raises the question: how seriously should a surgeon take into consideration this unique radiological finding, along with the patient’s condition during the diagnosis, treatment and prognosis of abdominal pathology?

Patients who present with PI/PVG fall into three general subgroups: mechanical, ischemic, and benign idiopathic, with a different range of age, clinical signs and laboratory findings, but with one common feature: an underlying abdominal disease and often previous abdominal surgery[9].

A radiological finding of PVG does not necessarily indicate severe underlying pathology. It can be seen in relatively benign situations such as after endoscopic procedures and gastric dilatation, which only necessitate conservative therapy[10]. Traditionally, PVG has been considered as an indicator of bad prognosis and associated with a particularly high mortality rate[11,12].

Τhe dilemma is deciding how to manage the patient with newly diagnosed PI/PVG[13]. Surgical exploration is indicated in a large percentage of patients with mechanical and ischemic causes, as it was clearly demonstrated in the two present cases. Unfortunately, aggressive surgical tactics often fail. Extremes of age and comorbidity make many of these patients unsuitable for aggressive treatment such as revascularization or extended bowel resection. If expectant care is to be recommended, it is imperative for physicians to discriminate correctly between PI/PVG that has arisen from acute mesenteric ischemia from benign PI/PVG.

In particular, in critically ill patients with clear abdominal symptoms, radiographic control seems to be a waste of time. After the patient’s resuscitation, salvage surgical intervention should be considered. When time is not an issue and CT can be performed that results in PI/PVG findings, the treatment goal is to deal with the underlying pathology in an appropriate manner, surgical or conservative, according to the three above mentioned causes (i.e. obstruction, ischemia, or iatrogenic intervention). When ischemia is suspected, the comorbidity factors that should be prioritized are the general vascular and heart condition of the patient, physical examination (abdominal pain, discomfort or tenderness, or bloody stools), and laboratory findings (serum lactate, or sepsis markers). If mesenteric ischemia is strongly suspected, an exploratory laparotomy is preferred if the general condition of the patient allows it; otherwise, conservative treatment is the only choice. However, when ischemia is a likely but not certain diagnosis, endoscopy or laparoscopy could offer the physician a less invasive method to access bowel viability and rule out mesenteric ischemia, while also offering the opportunity for easy conversion to open laparotomy if necessary. The advantages of these minimally invasive methods are known and particularly appreciated for this group of patients. Finally, when the differential diagnosis guides the physician to a benign situation, especially after a history of medical intervention over the previous days, observation could be the gold standard, along with medical conservative management. Additional imaging methods such as CT or magnetic resonance imaging mesenteric angiography could also count in the final diagnosis of this benign medical situation.

Concerning our patients, according to the above analysis, the first patient with bowel obstruction underwent radiological examination for being in a critical but stable situation. The signs of sepsis were ascribed to abdominal pathology as soon as other infection sources were excluded, and because of her neuromuscular disease, the patient did not demonstrate subjective symptoms. Surgical exploration, although therapeutic, did not improve the patient’s outcome. For the second patient, surgical management of intestinal ischemia was absolutely indicated. However, the coexisting morbidity factors predicted a lethal outcome. The clinical findings of the patient were severe and suggested that the radiological examination had less value after all, in contrast to the first patient.

Nowadays, with the development of highly advanced imaging techniques, potentially severe pathology, such as bowel ischemia, is diagnosed at much earlier stages, which allows prompt treatment and significantly reduces mortality[14]. There is no definitive algorithm or accepted path of action in the surgical or medical community[15], and we are not sure if there should be one. PVG is not by itself a surgical indication and the treatment depends mainly on the underlying disease. The exact role of PVG as a diagnostic criterion probably emerges in patients with an inaccurate diagnosis, with a less or equal value to physical examination and apparently less value than other comorbidity factors. The prognosis is related to the pathology itself and is not influenced by the presence of PVG.

In conclusion, PVG seems to be a radiological parameter along with other diagnostic criteria, but it is certainly not proof of an ominous outcome in patients with underlying intra-abdominal pathology. Additionally, in benign or iatrogenic cases, this finding should provide a motive for further clinical and radiological evaluation.