Computed tomography (CT)-guided lung biopsy is a common diagnostic procedure that is associated with various complications, including pneumothorax, hemoptysis and parenchymal hemorrhage. Systemic air embolism is a very rare (0.07%) but potentially life-threatening complication. We report a fatal case of air embolism to the cerebral and coronary arteries confirmed by head and chest CT, followed by a review of the literature.

Percutaneous computer tomography scan guided thoracic needle biopsy is a widely accepted and frequently performed procedure for pulmonary lesions. Its rare complications such as pneumothoax, intraparenchymal hemorrhage and hemoptysis are usually conservatively treated with minimal intervention. Systemic air embolus is an extremely rare complication that is potentially fatal, reported to be around 0.02% to 0.07%[1-7], with a probably higher incidence since it can be undiagnosed in asymptomatic patients. We present a case of a fatal systemic air embolus complicating a percutaneous computed tomography (CT) scan-guided trans-thoracic needle biopsy, performed for a suspicious lung lesion.

Our patient is a 76-year-old veteran with known diabetes mellitus, hyperlipidemia and a history of chronic obstructive pulmonary disease and pulmonary fibrosis. A recent CT showed a 3.5 cm round mass in the anterior aspect of the left upper lobe, with few enlarged mediastinal lymph nodes. A positron emission tomography CT was obtained and demonstrated strong increased radiotracer uptake within the mass, highly suspicious for primary lung malignancy, without evidence for loco- regional or distant metastases. A CT guided biopsy of the lesion was requested.

The patient requested to be sedated. The anesthesiology team was consulted to monitor the patient during the biopsy. The procedure was performed by an experienced radiologist; the instrument used was a coaxial 17 gauge introducer with an 18 gauge core biopsy needle (Temno, Cardinal Health system, McGaw Park, IL). The patient was placed in a decubitus position, and was instructed not to breathe during the introduction and advancement of the needle, during exchanging stylet with the core biopsy needle, during obtaining specimen by pressing the plunger and during removal of the needle and then replacement of the stylet. After a sample was obtained, the core needle biopsy was removed and the stylet was immediately re-inserted (Figure 1). As the sample was being transferred into formalin, the anesthesiologist noted that the patient was bradycardic and he became unresponsive. He was immediately placed on increased oxygen and bag ventilated and the anesthesiologist started reversing his sedation.

A chest and head CT were immediately obtained. The chest CT images demonstrated a small amount of air in the epicardium, probably in the peripheral coronary vessels (Figure 2) without evidence of pneumothorax. The head CT showed a large amount of air along the subarachnoid spaces and peripheral vessels over the left cerebral convexity, in the frontal, parietal and temporal occipital lobes, which were interpreted as gas emboli (Figure 3). 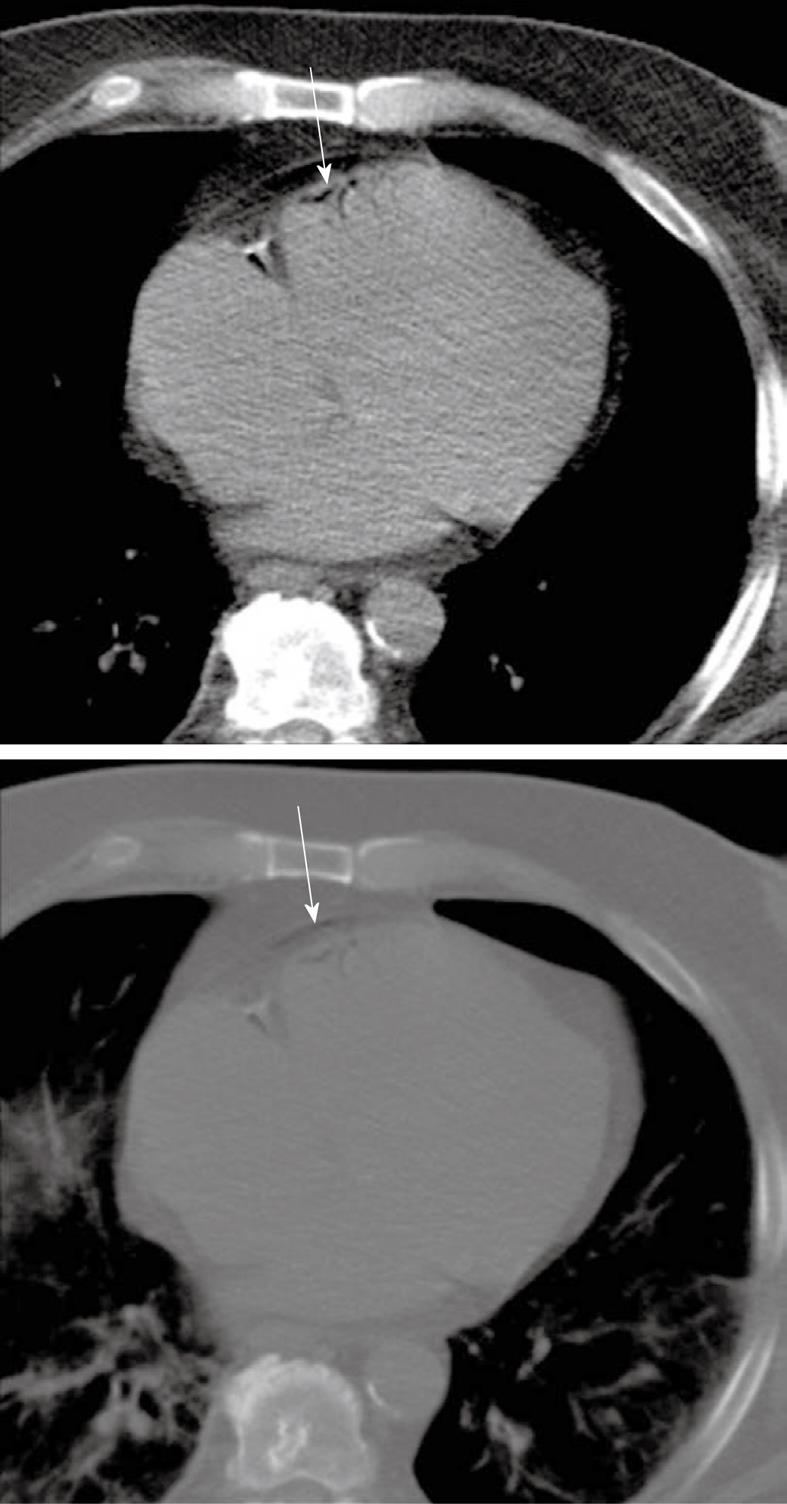 Figure 2 Axial images in soft tissue and lung window through the lower mediastinum, display a small amount of air in the epicardium (arrows), thought to be along the peripheral coronary vessels.

The patient was stabilized and then transferred to a regional hospital for hyperbaric oxygen therapy, where he received treatment for 4 h. A repeat post-treatment head CT showed resolution of the air emboli but demonstrated subtle hypodensities in the left cerebral hemisphere involving the frontal and parietal lobes with slight sulcal effacement suggesting subacute ischemic changes. Magnetic resonance imaging could not be performed given the instability of the patient. The patient was readmitted to our hospital with residual right-sided deficit and agitation. His stay was complicated by diffuse alveolar hemorrhage. The patient who had already signed a Do Not Resuscitate order, died 16 d after the biopsy.

Percutaneous needle biopsies of lung lesions are commonly used and are usually regarded as safe procedures with limited morbidity and extremely rare mortality. Most frequent complications are pneumothoax (27%), pulmonary bleeding (11%) and hemoptysis (7%)[1-3]. These are usually conservatively treated and self-resolving. Other rare complications include systemic air embolus, tumor implantation and empyema. Systemic air emboli are extremely rare with a published incidence of 0.02% from a lung biopsy survey in the United Kingdom to 0.07% in the literature[2-6], but are serious and can be fatal. To our knowledge, 19 cases have been published in the last 30 years.

Air in the pulmonary venous system embolizes mainly to coronary and cerebral arteries. Only 2 mL of air injected into cerebral circulation can be fatal, and 0.5 to 1.0 mL injected into pulmonary veins can cause cardiac arrest from coronary embolism[4].

There are three possible ways air can be introduced into the pulmonary venous system during percutaneous needle biopsy of the lung. First, air may directly enter the pulmonary system through the needle, if the needle is placed into a pulmonary vein while the base is exposed to the atmosphere when the stylet is removed, and the atmospheric pressure exceeds the pulmonary veins pressure, as may occur during deep inspiration. Second, air may be introduced into the pulmonary arterial circulation and then reach the pulmonary veins by traversing the pulmonary microvasculature. Third, a needle may penetrate simultaneously at an air-containing space, such as a nearby pulmonary alveolar space, bronchus, cavity or air cyst, and a nearby pulmonary vein, which can create a communicating fistula. Then cough, straining or valsalva maneuvers can increase the pressure in the air-containing space, resulting in air embolus[2-11]. Some factors are thought to be contributors: coughing during the procedure, positive-pressure ventilation, a needle tip placed within pulmonary veins and procedures performed for a cystic or cavitary lesion and in patients with vasculitis[8].

Some authors postulated an increased probability of gas embolus related to the size of the needle and the coaxial techniques, since larger needles have an increase risk of involvement a pulmonary vein and the coaxial method increases the risk of contact with the atmosphere after removal of the internal stylet. However, a number of reported cases have described systemic air embolus with smaller needles and without the use of coaxial method, questioning any relationship between the two factors[6].

Diagnosis of a systemic air embolus is difficult. It is mainly clinically suspected, based on the deterioration of the patient’s neurologic and cardiovascular status. Brain and chest CT scan can provide a definitive diagnosis by showing air bubbles in cerebral vessels, aorta, left atrium and ventricle or pulmonary veins. Coronary embolism may cause myocardial ischemia, decreased myocardial function, and sudden death. Cerebral air embolus may cause focal defects, seizure, and coma. An ophthalmoscopy examination may demonstrate air bubbles in the retinal vessels[4]. Some authors reported that systemic air embolus is underestimated since it is undiagnosed in asymptomatic patients[6,12]. The initial treatment consists of immediate administration of 100% oxygen, and placing the patient in the left lateral decubitus position with lowering of the head[4-6,11,12].

Hyperbaric oxygen therapy is considered the first line therapy for systemic air embolism, by reducing bubble volume and improving tissue oxygenation. The size of a gas bubble is inversely proportional to ambient pressure at constant temperature[13]. Breathing 100% oxygen at a pressure above that of the atmosphere decreases the size of gas bubbles by raising ambient pressure and also causes systemic hyperoxia[6,8,14,15]. Hyperoxia produces diffusion of oxygen into the bubble and nitrogen out, and also allows a large quantity of oxygen to dissolve in the plasma and increases oxygen diffusion in tissues. Furthermore, it prevents cerebral edema by reducing the permeability of blood vessels while supporting integrity of blood-brain barrier[6,9,14].

With cerebral embolism, immediate hyperbaric therapy was reported to decrease the mortality rate to 7%[4,7]. Although immediate treatment is recommended, delayed hyperbaric oxygen therapy may also increase survival and decrease the neurologic deficit, even many hours after the incidence, because air bubbles have been demonstrated at 48 h after initial events[4]. In our case, the follow-up CT scan after hyperbaric oxygen treatment showed complete resolution of the cerebral air embolus and the patient started to regain some of his neurological function. His death is thought to be related to his pulmonary hemorrhage, rather than to his cerebral air embolus.

Several considerations have been recommended to reduce the risk of air embolus, such as avoiding biopsy through a cystic or cavitary lesion or bullous lung parenchyma, using a stylet and keeping an occluded hollow at all times, requesting the patient to stop breathing when manipulating the biopsy kit and to restrain from coughing and straining, and penetrating the least amount of parenchyma to reach the lesion[7].

In our case, the patient did not cough and was instructed to stop breathing during a critical part of the procedure yet this complication still occurred. CT-guided lung biopsy is routinely performed in our institution by an experienced radiologist and such complications never occurred before, which leads us to believe that this dangerous complication can happen in spite of long experience and meticulous care.

Despite the rarity of this dangerous and eventually fatal complication, radiologists should be aware of the possibility of systemic air embolus after lung biopsy and should be ready to provide emergent management for the treatment of the patient. Although several recommendations and precautions have been proposed to reduce the risk of this complication, it may be inevitable and can occur despite long experience and meticulous care.