The success rate of percutaneous radiofrequency (RF) ablation for hepatocellular carcinoma (HCC) depends on correct targeting via an imaging technique. However, RF electrode insertion is not completely accurate for residual HCC nodules because B-mode ultrasound (US), color Doppler, and power Doppler US findings cannot adequately differentiate between treated and viable residual tumor tissue. Electrode insertion is also difficult when we must identify the true HCC nodule among many large regenerated nodules in cirrhotic liver. Two breakthroughs in the field of US technology, harmonic imaging and the development of second-generation contrast agents, have recently been described and have demonstrated the potential to dramatically broaden the scope of US diagnosis of hepatic lesions. Contrast-enhanced harmonic US imaging with an intravenous contrast agent can evaluate small hypervascular HCC even when B-mode US cannot adequately characterize tumor. Therefore, contrast-enhanced harmonic US can facilitate RF ablation electrode placement in hypervascular HCC, which is poorly depicted by B-mode US. The use of contrast-enhanced harmonic US in ablation therapy for liver cancer is an efficient approach.

Hepatocellular carcinoma (HCC) is the most common primary hepatic malignancy[1,2]. Various treatment modalities such as hepatic resection, liver transplantation, transcatheter arterial chemoembolization (TACE), percutaneous ethanol injection, radiofrequency (RF) ablation, microwave coagulative therapy , percutaneous ethanol injection therapy and high intensity focused ultrasound have been developed resulting in improved outcomes[3-9]. Patients with liver tumors not suitable for resection may benefit from minimally invasive treatment that provides good palliation or cure. RF ablation is widely performed as a percutaneous local treatment under real-time sonographic guidance developed for this purpose[4-6]. However, multiple sessions of RF ablation therapy are often required for hepatic malignancies, including cases in which hepatic nodules are poorly defined by B-mode ultrasound (US) alone[5]. US angiography and computed tomography (CT) fluoroscopy can be used for accurate tumor localization, intra-procedural monitoring, and procedural control[7,8]. These methods, however, increase exposure to radiation because multiple CT scans are obtained and the method is invasive because of the angiographic procedures involved. Moreover, an MR-guided system for RF ablation can show images of hepatic malignancies that cannot be adequately characterized on B-mode US[9]. Though we can use Magnetic resonance imaging (MRI) for reference images, RF ablation procedure is actually performed under sonographic guidance. Therefore, an MR-guided system cannot be used for intraprocedural monitoring and procedural control.

Worldwide, US has functioned as the mainstay of screening efforts to detect small incidental hepatomas in high-risk patients. Nevertheless, the limitations of conventional gray-scale B-mode US for the detection of focal liver lesions have been well documented[10]. Color Doppler and power Doppler increased the sensitivity for hepatic lesion detection compared to that of gray-scale US, but these modalities do not provide levels of sensitivity comparable to those of contrast-enhanced axial imaging (CT and MRI)[10-14]. Two breakthroughs in the field of US technology, harmonic imaging and the development of second-generation contrast agents, have recently been described and have demonstrated the potential to dramatically broaden the scope of US diagnosis of hepatic lesions[12-14]. Contrast-enhanced harmonic US imaging with an intravenous contrast agent is considered useful for assessing the therapeutic response to TACE and RF ablation therapy in patients with hepatic malignancies[15-19], and is able to evaluate small hypervascular HCCs even when B-mode US cannot adequately characterize the tumors[20-26].

Therefore, contrast-enhanced harmonic US is expected to decrease the number of RF ablation treatment sessions in difficult cases[26-31].

This paper will review the former state of the art techniques for contrast-enhanced US in RF ablation for liver cancer, and illustrate the potential of the newer techniques for improving the targeting in percutaneous RF ablation therapy.

Levovist (Schering, Berlin, Germany) is a first generation US agent consisting of galactose[32]. A trace of palmitic acid is added as a surfactant to stabilize the resultant microbubbles. When Levovist dissolves in blood, air trapped inside the galactose is released as free gas bubbles. These bubbles have a weak encapsulating shell and are easily destroyed by US.

A gas bubble or encapsulated microsphere will resonate in a highly non-linear fashion, with much of the energy in the returned echo concentrated in harmonics of the insonating frequency[40]. Much of the energy of the backscattered signal is concentrated in or around the second harmonic. Many modern transducer/receiver systems have sufficient bandwidth to exploit this by insonating at the main resonant frequency of the bubble and filtering the returned signal to detect the second harmonic only. This enables separation of the signal derived from the contrast agent from the background tissue signal.

A variety of algorithms are involved in enhancement of the signal coming from the microbubbles and cancellation of signals from tissues. In pulse inversion, also known as phase inversion, two pulses in rapid succession are emitted into the tissue; the second pulse undergoes a 180° phase change so as to be a mirror image of the first. The fundamental response produced in the tissues, which will be phase-inverted compared with the fundamental pulses, is erased because the sum of the two-inverted pulses is zero. In this way, echoes from the microbubbles are enhanced so as to differentiate them from those coming from stationary tissues[41,42]. 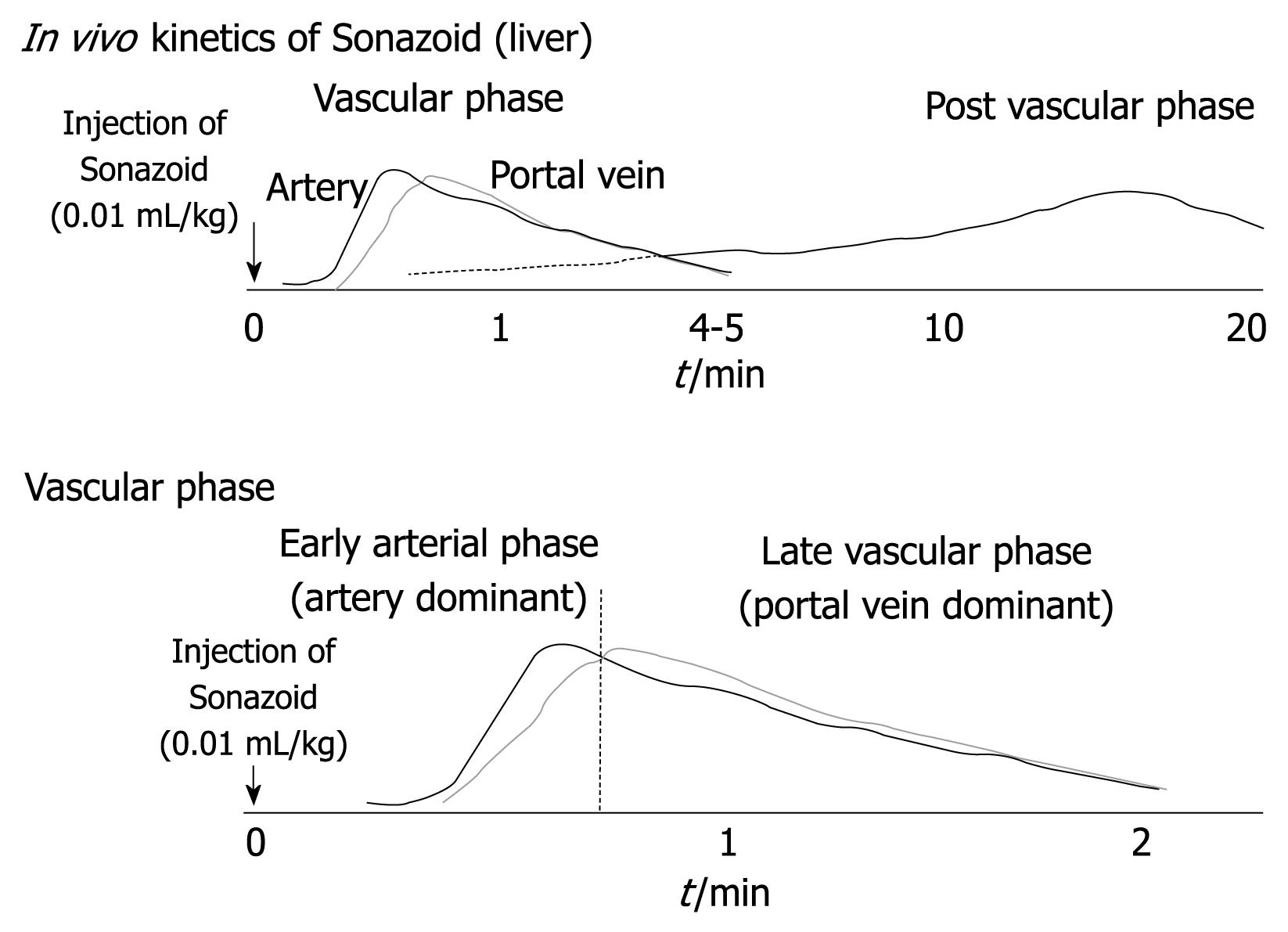 The success rate of percutaneous RF ablation for hepatic cancer depends on correct targeting via an imaging technique. However, RF electrode insertion is not completely accurate for residual nodules of hepatic cancer because B-mode US, color Doppler, and power Doppler US findings cannot adequately differentiate between treated and viable residual tumor tissue[27]. Electrode insertion is also difficult when we must identify true malignant tumors among many large regenerated nodules in cirrhotic liver[27]. Therefore, contrast-enhanced harmonic US can faciliatate RF ablation electrode placement in hypervascular HCC, which is poorly depicted by B-mode US (Figure 2). 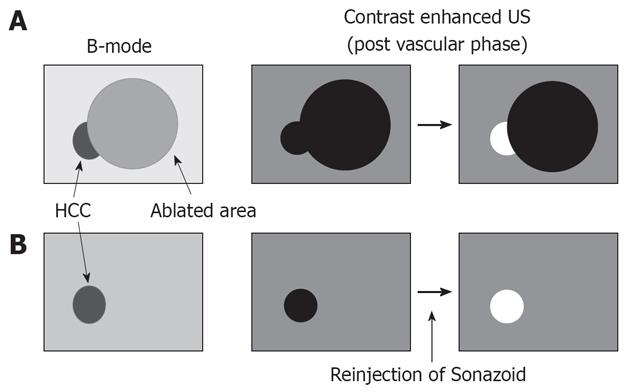 Figure 2 Indications for contrast-enhanced ultrasound (US) in radiofrequency (RF) ablation therapy. A: Local tumor progression or residual hepatic malignancies. Contrast-enhanced US shows not only the tumor but also ablated areas as a defect image in the post vascular phase. However, viable tumor is enhanced by reinjection of Sonazoid; B: Hepatic malignancies with severe cirrhotic change. The true malignant tumor was sited among many large regenerated nodules in cirrhotic liver. On contrast-enhanced US, the tumor was distinguishable by reinjection of Sonazoid.
Procedure

The sonographic contrast agent is perfluorocarbon microbubbles (Sonazoid) with a median diameter of 2-3 μm. This contrast agent is reconstituted with 2 mL distilled water for injection. The anticipated clinical dose for imaging of liver lesions is 0.010 mL encapsulated gas per kilogram of body weight, and this contrast agent is administered as a bolus at a speed of 1 mL/s and then flushed with 10 mL of normal saline via a 22-gauge cannula placed in the antecubital vein.

The contrast harmonic imaging mode is adjusted after the plane showing the area of tumor has been viewed on B-mode US. Thus, we can see two views as contrast-enhanced US images and B-mode US images side by side on the monitor. At the appearance of the first microbubble signal in the liver parenchyma, patients are requested to hold their breath. Real-time images in the optimal scanning plane are displayed by slightly changing the scanning slice showing the nodule. Hepatic malignancies are visualized from the enhancement of intratumoral vessels at the outset (Figure 3) to defects in the liver parenchyma after a short time. We are able to use these defect lesions as a target for insertion of a single RF electrode. Percutaneous insertion of an RF electrode can be guided by real-time contrast harmonic US (Figure 3). In patients previously treated with ablation for hepatic nodules, demonstration of viable nodules among all nodules detected in post-vascular phase is achieved by re-injection of a new dose of Sonazoid, in order to confirm tumor vascularity before electrode insertion. After the RF electrode has penetrated hepatic malignancies, each ablation can be performed for a period of more than 8 min with at least 60 watts at treatment initiation.

Figure 3 A 66-years-old man with 1. 0 cm hepatocellular carcinoma (HCC) (S3) with liver cirrhosis. A: Contrast harmonic US showed HCC nodule as a defect (arrow) in the post vascular phase after administration of Sonazoid; B: Enhancement (arrow) of HCC was obtained in the defect immediately after reinjection of Sonazoid; C: The defect (arrow) was later exhibited again and the RF electrode needle (arrowheads) was inserted.
CLINICAL OUTCOMES

Numata et al[31] reported that nine (90%) of the 10 lesions that were not detected on conventional US but were depicted on real-time contrast-enhanced harmonic gray-scale US with Levovist (incomplete local treatment, n = 4; small new lesion, n = 6) were successfully treated with percutaneous ablation therapy guided by this method. The maximal diameter of the tumors ranged from 0.8 to 2.0 cm with a mean maximal diameter of 1.4 ± 0.4 cm (± SD).

OTHER MODALITIES
CO2 enhanced US (US angiography)

US angiography enhanced with intraarterial injection of CO2 microbubbles is a sensitive tool for the depiction of small hypervascular HCCs, especially those that are smaller than 1 cm in diameter[43,44]. US angiography is also useful for the accurate demonstration of vascularity within a tumor and offers useful information for determining the appropriate therapeutic strategy for the treatment of HCC. Thus, RF ablation guided by CO2 microbubbles-enhanced US is a feasible technique for treating local progression of HCC lesions that cannot be adequately depicted by conventional US[45]. However, nodules may become unclear because bubbles become trapped and accumulate in sinusoids with repeated injections of CO2 microbubbles. In addition, this method involves angiographic procedures that are invasive.

Under CT fluoroscopy using either CT arteriography or iodized oil injection, we can target and puncture hepatic malignancies using a percutaneous ethanol injection needle. Real-time CT fluoroscopy is useful to guide the needle puncture and to monitor ethanol injection in small hepatic malignancies[7]. Another merit of this technique is that the efficacy of treatment can be evaluated using contrast-enhanced CT immediately after treatment. However, this therapy would increase exposure to radiation when multiple CT scans are required, and is also invasive because of the subsequent angiographic procedure.

Virtual CT sonography using magnetic navigation (RVS; HITACHI Medico, Tokyo, Japan) provides cross-sectional images of CT volume data corresponding to the angle of the transducer in the magnetic field in real-time[46,47]. This imaging technique displays a real-time synchronized multiplanar CT image in precisely the same slice of the US plane. Thus, Real-time RVS can be used for real-time needle insertion guidance, especially for nodules demonstrated on CT, but not on US. Needle insertion guidance using RVS is also useful for locally recurring nodules next to previously ablated lesions, which are not usually detected by B-mode US. Furthermore, this technique is useful for ablation of the area, to establish a safety margin surrounding the originally ablated area. However, RVS has some weakness regarding imaging incompatibility which might be attributable to the fact that the depth of breath-holding on CT and US examination varies, and the chances of this problem also increase when the distance is greater between the magnetic sensor attached to the ultrasonic transducer and the magnetic generator.

Percutaneous RF ablation guided by contrast-enhanced harmonic US is an efficient approach for HCCs, which are not clearly demarcated by B-mode US, in both untreated and locally recurrent HCC cases. Moreover, second generation microbubbles could facilitate contrast harmonic US guidance of RF ablation by extending the time limitation, simplifying the procedure, and improving detectability. RF ablation guided by second generation microbubbles-enhanced US could become easier and be an efficient approach for hepatic malignancies that are not clearly depicted on B-mode sonography.