Obesity, sleep apnea, diabetes and cardiovascular diseases are some of the most common diseases encountered by the worldwide population, with high social and economic burdens. Significant emphasis has been placed on obtaining blood pressure, body mass index, and placing importance on screening for signs and symptoms pointing towards cardiovascular disease. Symptoms related to sleep, or screening for sleep apnea has been overlooked by cardiac, diabetic, pulmonary and general medicine clinics despite recommendations for screening by several societies. In recent years, there is mounting data where obesity and obstructive sleep apnea sit at the epicenter and its control can lead to improvement and prevention of diabetes and cardiovascular complications. This editorial raises questions as to why obstructive sleep apnea screening should be included as yet another vital sign during patient initial inpatient or outpatient visit.

Core tip: Obesity, diabetes, cardiovascular disease and obstructive sleep apnea are one of the most common chronic diseases involving population globally. Efforts have been directed towards prevention and public education about the disease process of each of this condition separately. Though these diseases are interlinked, but educational efforts are failing short to address them together.

Should obstructive sleep apnea (OSA) screening be included as yet another vital sign during the patient first visit? Obesity and metabolic syndromes are emerging as major public health issues. One point one billion adults population worldwide are overweight, and approximately 312 million of them are obese[1]. Obesity is highly prevalent in United States but the prevalence is increasing in China, Southeast Asia, Middle East and Pacific Island[2]. The increasing incidence of childhood obesity and its association with the cardiovascular disease is also becoming a major public health concern[3,4]. The number of individuals inflicted with diabetes worldwide is approximately 285 million, but is expected to increase to 439 million by 2030[5]. 17 million deaths out of 57 million total worldwide deaths are attributable to cardiovascular disease[6]. The prevalence of OSA is between 4%-7% and increasing[7].

Obesity and OSA seem to be an epicenter for most of the chronic disease catastrophe. OSA is one of the most common diseases, with a high incidence and prevalence rate that parallels with increasing obesity globally. OSA can be seen in non-obese patients with craniofacial abnormality and children with enlarged tonsils and adenoids too[8-10]. The growing prevalence of obesity and the increasing population body mass index has created major public health challenges[11]. Obstructive sleep apnea has been independently linked with hypertension, atrial fibrillation, cardiac disease, worsening of diabetes, insulin resistance, peri-operative and postoperative complications and coronary artery disease (CAD), to name the few[12-16]. In other words, the data links obstructive sleep apnea to a majority of chronic illnesses. In addition to the illness, untreated OSA increases the health care utilization, impairs work place efficiency, occupational injuries and increase healthcare utilization leading to billions of dollars in economic burden worldwide[17]. OSA if recognized can be adequately treated by an armamentarium of several different treatment modalities. Despite that 85% of the patients with clinically significant and treatable OSA have never been diagnosed, in other word the data has not made to the bedside[18].

OSA involves partial or complete collapse of the upper airway, despite respiratory efforts alternating with normal breathing. It affects 4%-7% of the population[7] and its prevalence in patients with cardiovascular disease is very high. Apnea is defined as a decline in peak signal excursion by ≥ 90% of their pre-event baseline for ≥ 10 s. Hypopnea is defined as a drop in the signal excursion by ≥ 30% of their pre-event baseline for ≥ 10% and ≥ 3% arterial oxygen desaturation or accompanied by an arousal[19]. OSA severity is based on Apnea-hypopnea index/h (AHI/h) It can be divided into mild OSA (AHI 5-15/h), Moderate OSA (AHI 15-30/h), and severe OSA (AHI > 30/h). The pathophysiology of obesity and OSA is intimately linked together. Obesity is a major risk factor for OSA. In obese patients there is an enlargement of soft tissue structures in the upper airway, leading to airway obstruction, especially during rapid eye movement sleep when there is atonia. In addition to obesity, there is an increase in fat deposition under the mandible, macroglossia, and palate, which can then lead to narrowing of airway and lead to apnea and hypopnea[20,21]. Obesity has been linked as the central and reversible cardiovascular risk factor that positively influences OSA, diabetes mellitus (DM), metabolic syndrome, hypertension, and lipid metabolism[17]. Children are not immune to the obesity, as the prevalence of obesity among children aged 2-5 is 10% and 6-19 years old is 15%[22].

OSA affects an estimated 15 million adult Americans, especially patients with hypertension, Atrial fibrillation (A-Fib), CAD, and congestive heart failure (CHF) where it is pervasive and levels are very high[23]. Additionally, OSA treatment has also been shown to improve atrial fibrillation incidence, coronary stent reclogging, and improvement of CHF and improvement in blood glucose and insulin resistance[24-29]. Recent evidence directly links OSA and obesity to CAD, heart failure, cardiomyopathy, A-Fib and DM and they are interrelated too as shown in Figure 1. The rise of obesity and DM has been an increased threat to the health of the global population, which has been catalyzed and compounded by the increased occurrence of OSA. In a recent study by Sleep AHEAD Research Group, OSA (AHI ≥ 5) was found to be in 86% of the population, whereas the pervasiveness of all forms of cardiovascular disease was 14%[30]. On the other hand, individuals who have DM and metabolic syndrome have an increased risk of cardiovascular disease and stroke[31]. 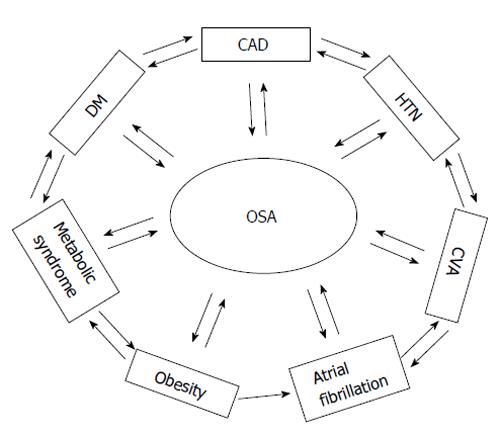 The screening for OSA for commercial drivers has been suggested by several societies as American College of Chest Physician, American College of Occupational and Environmental Medicine, and National Sleep Foundation. The International Diabetes federation also recommends screening patients for possible OSA[32]. This screening among the commercial drivers has been successfully implemented, on the other hand, peri-operative screening has been suggested but not implemented in majority of the hospitals despite the availability of simple screening tools as STOP-Bang Questionnaire[33], Berlin Questionnaire[34], neck size, airway, morbidity, Epworth Sleepiness Score, snoring (NAMES) criteria, all with the sensitivity ranging from 80% to 86%[35].

This data has been in literature now for several years, indicating the associations of OSA with almost any disease as glaucoma, end stage renal disease, chronic obstructive pulmonary disease, polycystic ovarian syndrome, metabolic syndrome, cardiovascular disease, stroke, depression, obesity and DM. Moreover, the treatment has led to improvements in the underlying condition[36-38]. The screening test carries high sensitivity, but also has a low specificity. This can result in a plethora of false positive diagnosis and may increase the health care cost. There is high relationship between OSA, hypertension, cerebrovascular disease, CAD and A-Fib. Early diagnosis and treatment of OSA will help in preventing the increase morbidity and mortality associated with those conditions. Studies have shown the improvement in ejection fraction, carotid intimal thickening and benefits in coronary artery disease, maintenance of sinus rhythm from A-Fib after cardioversion and improvement in insulin resistance. Moreover untreated OSA is also associated with increased risk of death[39-46]. The question arises, if it is the prime time to push for OSA screening for every patient walking in outpatient clinic or hospital? Or do we have to adjust the cutoff of points of our screening test so we can compromise with a decrease in sensitivity to have better specificity to avoid excess healthcare cost as a result of high false positive tests. It is the opinion of the author that Stop-Bang questionnaire, Berlin or NAMES questionnaire can be utilized as the screening tool. In the presence of symptoms, patient should undergo formal sleep study with home sleep study or overnight in lab polysomnography[33-35]. Regardless, one thing is clear: that every physician, nurse and midlevel provider needs to educate patients on risk prevention and education regarding the causes, signs and symptoms of diabetes, sleep apnea, obesity prevention and cardiovascular disease prevention. It is about time that health care providers take the responsibility of preventative education of such diseases as a package rather than fragmentation of education of diabetes in diabetic clinics, sleep apnea in sleep clinics, and cardiovascular disease in heart clinics, as these diseases are interrelated. I will leave the debate open as to if it is about time to push for screening of OSA as one of the vital signs on every patient initial visit.