AIM: To study if HER-2 overexpression by locally advanced esophageal cancers increase the chance of brain metastasis following esophagectomy.

METHODS: We retrospectively reviewed the medical records of esophageal cancer patients who underwent esophagectomy at University of Iowa Hospitals and Clinics between 2000 and 2010. Data analyzed consisted of demographic and clinical variables. The brain metastasis tissue was assayed for HER-2 overexpression utilizing the FDA approved DAKO Hercept Test®.

CONCLUSION: HER-2 overexpression might be associated with increased risk of brain metastasis in esophageal cancer patients following esophagectomy. Further studies will be required to validate this observation.

Brain metastasis from locally advanced esophageal cancer as the first site of disease relapse following multimodality treatment that includes chemotherapy, radiation therapy and esophagectomy is rare[1,2]. The incidence rate of brain metastasis, thought to be around 1%-5%, is derived from case series and autopsy reports[3,4]. Although the treatment goal of locally advanced esophageal cancer is to cure the disease, there is a high rate of disease relapse, whether locally or as distant metastasis, with the majority of relapses occurring in the liver, abdomen, lungs and bone[1]. Urba et al[5], showed that 65% of patients treated with concurrent chemotherapy and radiation therapy then esophagectomy had distant metastases rather than local recurrence upon relapse.

Multiple clinical and pathological features have been identified as prognostic factors in patients who receive concurrent chemoradiotherapy and esophagectomy. Factors including pathological complete response (pCR) to neoadjuvant treatment[6,7], lower tumor grade and stage[8,9], and smaller tumor length[10] are associated with favorable outcomes. Other trials showed that larger tumors and perioperative chemotherapy or radiation therapy might be associated with a higher risk of subsequent brain metastases[11,12]. In breast cancer, other risk factors such as over expression of HER-2, a membrane bound tyrosine kinase, were shown to predispose to brain metastasis (hazard ratio: 4.23, P = 0.0007)[13,14].

HER-2 is over expressed in approximately 25% of esophageal cancers[15,16] and is associated with a worse prognosis[17]. HER-2 receptor status became more clinically relevant after the ToGA trial showed that targeting HER-2 positive gastric and gastroesophageal junction tumors with Trastuzumab (Herceptin), a recombinant humanized monoclonal antibody that inhibits HER-2 receptor, combined with chemotherapy improved survival in patients with metastatic disease[18]. To our knowledge, there has been no correlation identified between esophageal cancer HER-2 receptor positivity and risk of brain metastasis.

A request to review the electronic medical records of esophageal cancer patients who underwent esophagectomy at University of Iowa Hospitals and Clinics was submitted to the Institutional Review Board (IRB) and approved (IRB identification number: 201012764). The requirement for consent was waived by the IRB. We identified the patients who had esophagectomy for esophageal cancer through the pathology department database. A total of 142 electronic medical charts of patients with locally advanced esophageal cancer who underwent esophagectomy at UIHC between January 2000 and September 2010 were reviewed. Patients characteristics collected include age, sex, smoking history, esophagectomy date, cancer stage, location in the esophagus, histology and grade, administration and response to neoadjuvant chemotherapy and radiation therapy, resection margins status, number of total and positive lymph nodes removed, cancer relapse, date and location of relapse and survival data. HER-2 overexpression was assayed on the brain metastasis tissue utilizing the FDA approved DAKO Hercept Test® with exact following of the technique as outlined in the product insert. Semi-quantitative interpretation was done in accordance with the parameters outlined for gastro-intestinal malignancies in the ToGA trial[18].

Kaplan-Meier curves were constructed for overall survival. To compare survival distributions for the patients who had complete or partial tumor response to neoadjuvant treatment, a log-rank test was used. Statistical analyses were performed using SAS (version 9.2).

Regarding survival, 65/142 patients (45%) were deceased at the time of analysis. Overall survival for all patients is shown in Figure 1. Of the patients who reached pCR following neoadjuvant chemotherapy and radiation therapy, 58% were alive at 36 mo (median survival not reached). Median survival for the pPR patients was 28.8 mo (95% CI: 18.7-36.0). Although Figure 2 shows a survival difference for the patients who had pCR and pPR, this was not statistically significant (P = 0.207). 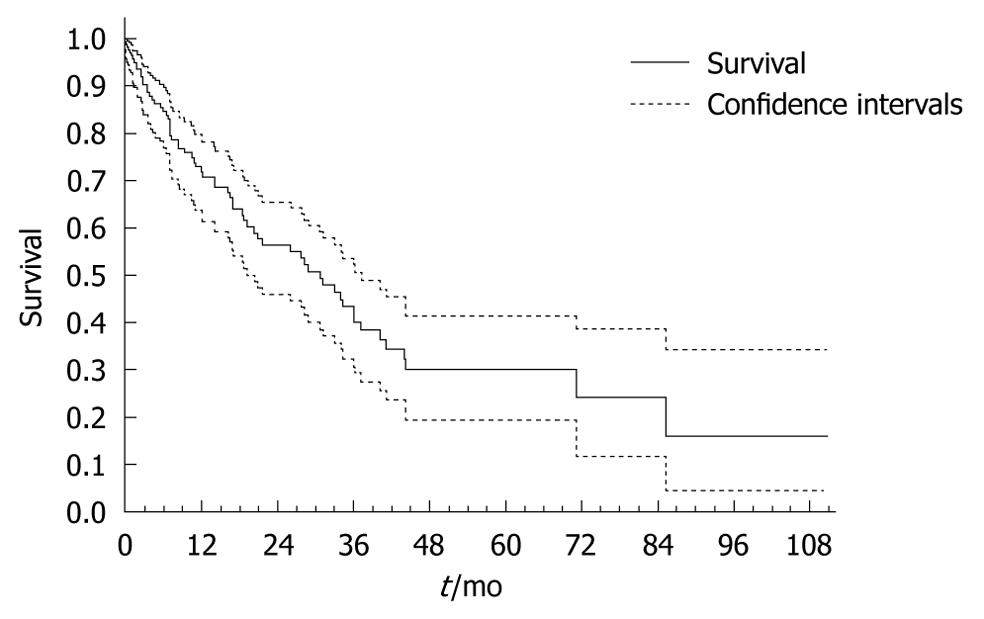 Figure 1 Overall survival for all patients. 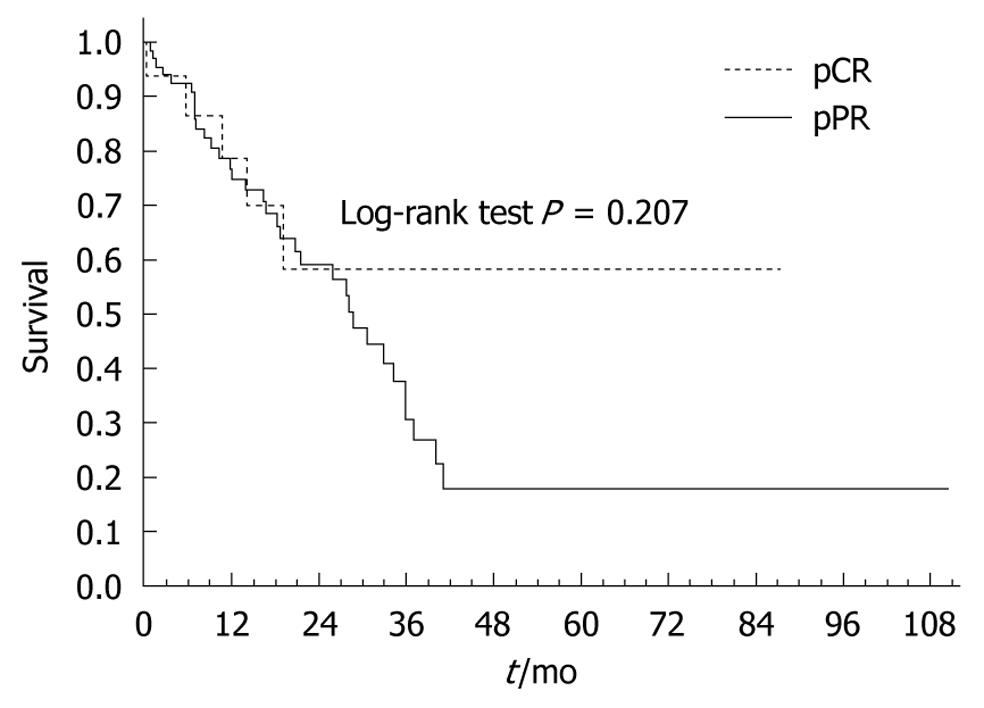 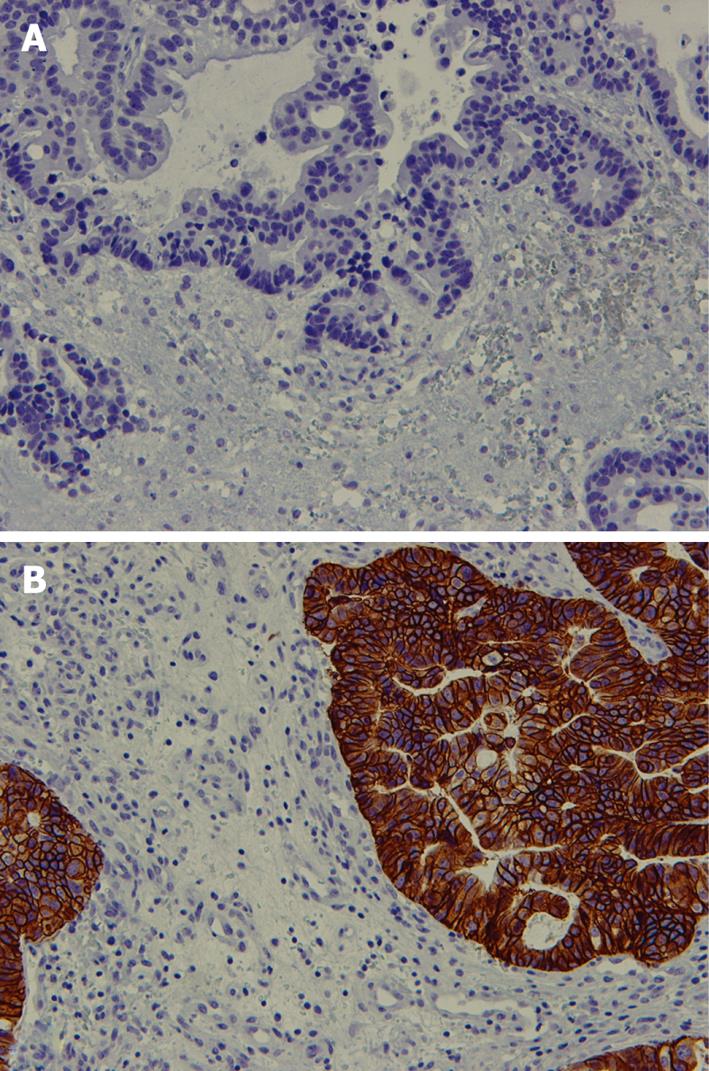 Esophageal cancer is potentially a curable disease if diagnosed at an early stage but fatal when widely metastatic. The current standard of care of locally advanced esophageal cancer includes neoadjuvant concurrent chemotherapy and radiation therapy followed by esophagectomy[19,20]. Although significant advances have been made in achieving better quality of life and survival outcomes, it is estimated that only around 20% of the patients with local disease are alive 5 years following diagnosis[21,22].

Treatment of CNS metastasis, regardless of the primary cancer type, often includes surgery, radiation therapy or chemotherapy. Although surgical resection or SRS of a limited number of brain metastasis resulted in survival benefit in various cancers including esophageal cancer[26-28], chemotherapy treatment of CNS metastasis has been limited, primarily due to the blood brain barrier in addition to other factors[29,30]. Nevertheless, there have been recent advances in the chemotherapeutic management of CNS metastasis, whether parenchymal or leptomeningeal. Whereas Trastuzumab is known to be an effective treatment of metastatic HER-2 positive breast cancers, its CSF levels were reported to be low when administered intravenously[31]. Alternatively, intrathecal Trastuzumab showed encouraging results treating HER-2 positive breast cancer leptomeningeal metastasis[32,33]. Lapatinib, an oral HER-2 tyrosine kinase inhibitor that crosses the blood brain barrier, combined with Capecitabine resulted in partial and complete responses of brain metastasis from HER-2 positive breast cancers[34-37].

In summary, we noticed a high incidence of brain metastasis as the first site of cancer relapse in our series of locally advanced esophageal cancer patients who underwent esophagectomy. Additionally, we observed that HER-2 overexpression might be associated with increased risk of brain metastasis. The benefits of screening brain imaging in a selected population of HER-2 positive esophageal cancer patients before going through a major surgery such as esophagectomy and utilizing HER-2 directed therapy in case of brain relapse in that same subpopulation are potential considerations that deserve further exploration in future studies. Acknowledging the limitations of a retrospective study and the small sample size, our observations need to be replicated in a larger cohort.

The incidence of locoregional and advanced stage esophageal and gastroesophageal junction adenocarcinoma is rising in the western world. In spite of the treatment advances, recurrence rate of the locoregional disease is still high. Recently, there has been mounting evidence that the incidence of esophageal cancer relapse into the brain is rising, but no definite etiology has been identified so far to explain this observation.

HER-2 is a membrane tyrosine kinase that is over expressed in various cancers, including esophageal, breast and other cancers. It is well established that there is an association between HER-2 over expression and brain metastasis in breast cancer, but this correlation was not explored in esophageal cancer. In this study, the authors demonstrate that HER-2 over expressing locally advanced esophageal cancer patients might be prone to a higher incidence of brain relapse.

To our knowledge, this is the first study to suggest an association between esophageal cancer HER-2 status and the risk of brain metastasis. This finding is scientifically plausible given what we know about breast HER-2 over expression and brain metastasis. The test the authors used to examine the esophageal cancer HER-2 status (immunohistochemistry) is currently a standard and commonly used test in esophageal cancers as it has therapeutic implications. This broad application of HER-2 testing will definitely lead to identifying more patients who over express HER-2. Consequently, more robust studies with a larger sample size will be feasible to test the association between HER-2 over expression and brain relapse.

If subsequent larger studies support our observation of increasing risk of brain relapse from HER-2 overexpressing esophageal cancer, this will have various important implications. This subset of patients might benefit from screening brain imaging to rule our brain metastasis. This might decrease the number of futile esophagectomies which will be avoided if the patient is found to have brain metastasis before surgery. Additionally, there might be a role for biological agents, such as Trastuzumab or Lapatinib in the treatment of brain relapse from HER-2 overexpressing esophageal cancers.

HER-2 is a membrane tyrosine kinase involved in signal transduction pathways that regulate cellular proliferation. Overexpression of HER-2 was identified in various cancers, such as esophageal, gastric and breast cancers. It correlates with an aggressive disease and worse prognosis in breast cancer. Antibodies that target HER-2, such as Trastuzumab, are available for clinical use and commonly utilized in breast cancer. Trastuzumab was also found to prolong survival in advanced stage gastric and gastroesophageal cancers when administered with cytotoxic chemotherapies.

This paper presents an interesting topic about the relationship between HER-2 OVER expression and brain metastasis in esophageal cancer patients.