Hepatocellular carcinoma (HCC) is a highly malignant tumor and extrahepatic metastasis is not rare. The most common organ of HCC metastasis is lung, followed by bone and adrenal gland. To the best of our knowledge, isolated pancreatic metastasis of HCC that developed after curative resection has not been described previously. We report a case of solitary pancreatic metastasis of HCC, which was found 28 mo after left hemihepatectomy for HCC. The lesion was successfully resected with the pancreas, and no other metastatic lesions have been found in follow-up.

Hepatocellular carcinoma (HCC) is a highly malignant, generally fatal neoplasm arising from hepatocytes. HCC accounts for over 80% of all primary liver cancers, which rank fourth among the organ-specific causes of cancer-related deaths worldwide[1]. Extrahepatic metastases are not rare at diagnosis of HCC[2] and the most frequent sites of extrahepatic metastases are lung, abdominal lymph node and bone[3,4]. A review of the literature involving the surgical pathology of 355 solitary metastases to the pancreas identified 5 isolated pancreatic metastases from HCC[5]. Of these, 2 cases showed synchronous metastases and 3 cases were found at autopsy[6]. To the best of our knowledge, solitary pancreatic metastasis of HCC, which developed after curative resection, has never been described previously.

A variety of malignant tumors have been shown to metastasize to the pancreas[7-9]. At autopsy, pancreatic metastases are common and the primary carcinoma is usually located in the lung or in the gastrointestinal tract. In contrast, isolated pancreatic metastases at the time of diagnosis are rare and only account for only 2% to 3% of solid tumors of the pancreas[10]. Most do not present before the end stage of various primary neoplasms. At least 40% of these isolated metastases are derived from renal cell carcinomas while common primary sites for the remainder include lung cancer, breast cancer, colon cancer, melanoma and sarcomas[8,10,11].

A minority of these metastases are identified by imaging at the time of diagnosis of the primary tumor, while the majority are diagnosed at follow-up, either because of routine imaging or because of the development of symptoms[8]. In renal cell carcinoma, the mean interval between nephrectomy and the diagnosis of an isolated pancreatic metastasis is approximately 9 years. Unfortunately, pancreatic metastases are difficult to differentiate from primary pancreatic neoplasms. In particular, there are similar clinical presentations and similar features on radiological imaging. In this article, we report a case of isolated metastasis of an HCC to the pancreas 28 mo after curative resection of HCC.

A 46-year-old man with a history of surgical resection of hepatitis B associated HCC presented with a pancreatic mass that was identified with contrast enhanced dynamic computed tomography (CT) at follow-up. Two years and 4 mo previous to follow up, he was treated with an extended left hemihepatectomy for a 16.5 cm × 9 cm-sized solitary HCC compressing the intrahepatic duct. The pathology report disclosed a grade III HCC with portal vein invasion, but the resection margin was free of tumor. No obvious bile duct invasion or intrahepatic micrometastasis was noted. The patient was diagnosed as T3N0M0 stage IIIA disease by AJCC and modified UICC stage. The patient recovered well and subsequently had a 3 mo follow-up examination including liver dynamic CT and a serum α-fetoprotein test. Although series examinations revealed no definite intrahepatic recurrence, liver dynamic CT showed an irregular mass in the tail of the pancreas that was associated with dilatation of the distal pancreatic duct (Figure 1A). With a contrast-enhanced scan, the mass projected into the splenic vein (arrow, Figure 1B). Liver dynamic CT and 18F-FDG-positron emission tomography (PET) showed no recurrence of the primary HCC in the remnant. On FDG-PET, there was hypermetabolic activity in the pancreatic mass. Endosonography (EUS) revealed a rounded, well-defined mass (5 cm in diameter) in the tail of the pancreas (Figure 2). EUS-guided fine needle aspirations revealed a poorly differentiated carcinoma with histological features consistent with his previous HCC (Figure 3). The lesion was successfully resected, and no other metastatic lesions have been found in follow-up. Gross specimen study showed a mass in the tail of the pancreas, invading the splenic vein (Figure 4A). Microscopic examination revealed metastatic HCC in the pancreas (Figure 4B). 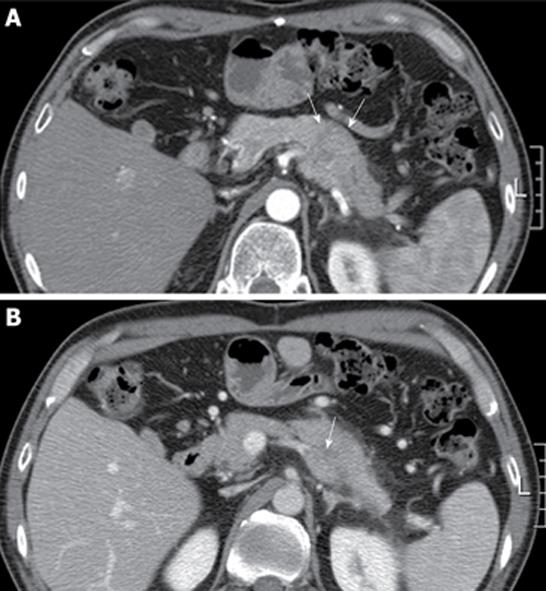 Figure 1 Abdominal computed tomography finding. A: Computed tomography showed an irregular mass in the tail of the pancreas that was associated with dilatation of the distal pancreatic duct (arrow); B: With a contrast-enhanced scan, the mass projected into the splenic vein (arrow). 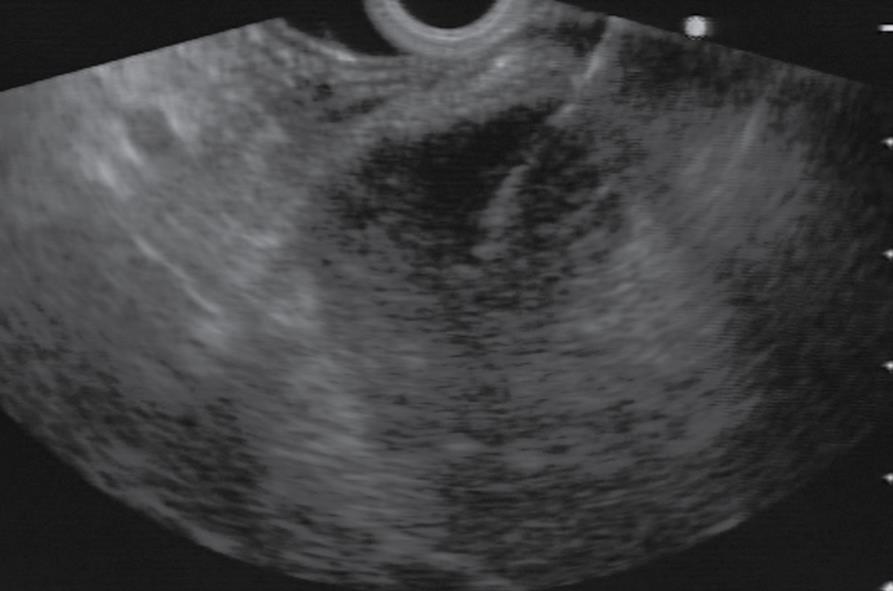 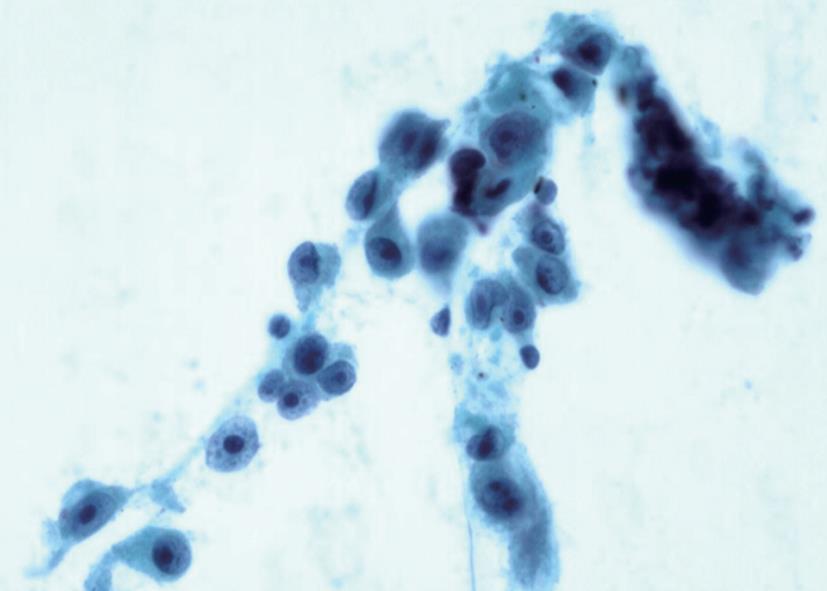 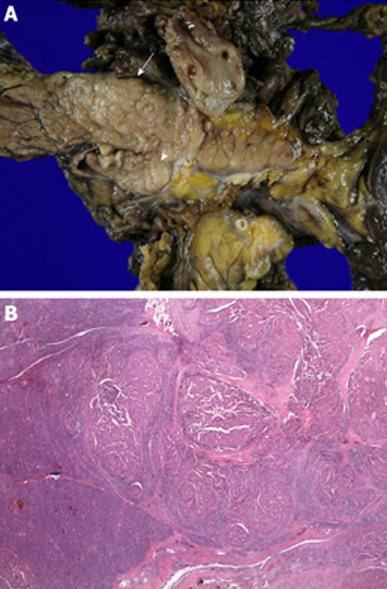 Figure 4 Surgical specimen. A: The tumor was 4.5 cm × 3.4 cm × 2 cm in size in the tail of the pancreas (arrow) and invaded the splenic vein (arrow head); B: Microscopic examination revealed metastatic hepatocellular carcinoma in the pancreas (HE, × 40).
DISCUSSION

The typical features of metastases from renal cell cancer detected by imaging studies (e.g. ultrasonography, CT, magnetic resonance imaging, and endoscopic ultrasonography) have been described repeatedly[12-15]. However, because these features are not confined to metastases from renal cell carcinoma, differentiation from other neoplasms of the pancreas is problematic in individual cases. Tissue diagnosis can be established before surgery with fine-needle aspiration biopsy, ultrasonography guided[16], CT guided[17], or endoscopic ultrasonography guided[18,19]. These techniques allow definitive tissue diagnosis, as well as an assessment of resectability. In the case of a pancreatic mass, rare causes, such as pancreatic metastasis, should also be taken into consideration besides the most common diagnosis, adenocarcinoma pancreas with its dismal prognosis. In particular, in cases where a patient is not undergoing surgical resection, a biopsy is mandatory to determine a definite diagnosis.

The result of treatment for extrahepatic recurrent HCC is poor[2,25,26]. Most metastases of HCC are multiple and are not amenable to surgical resection. Solitary metastases may be encountered occasionally. If considered resectable, the patient should be examined to exclude the presence of other metastasis, especially in the liver remnant, before embarking on surgery. Resection of isolated extrahepatic recurrences of HCC has been shown to prolong survival in selected patients[27-30]. The unusually positive outcome after treatment prompted a research group to question, rightfully, whether the positive outcome was really attributable to the successful removal of the metastases or whether it reflected an extremely protracted natural history of solitary pancreatic metastases.

To our knowledge, this is the first case of solitary pancreatic metastases of HCC that developed after curative resection. Our patient developed solitary pancreatic metastasis, which was documented 28 mo after resection of HCC. In patients with a pancreatic mass and history of HCC, the possibility of metastasis to the pancreas should also be taken into consideration besides the most common diagnosis, adenocarcinoma pancreas with its dismal prognosis.