AIM: To clarify the safety and efficacy of repeat endoscopic submucosal dissection (re-ESD) for locally recurrent gastric cancers after ESD.

METHODS: A retrospective evaluation was performed of the therapeutic efficacy, complications and follow-up results from ESD treatment for early gastric cancers in 521 consecutive patients with 616 lesions at St. Luke`s International Hospital between April 2004 and November 2012. In addition, tumor size, the size of resected specimens and the operation time were compared between re-ESD and initial ESD procedures. A flex knife was used as the primary surgical device and a hook knife was used in cases with severe fibrosis in the submucosal layer. Continuous variables were analyzed using the non-parametric Mann-Whitney U test and are expressed as medians (range). Categorical variables were analyzed using a Fisher’s exact test and are reported as proportions. Statistical significance was defined as a P-value less than 0.05.

CONCLUSION: Despite the low patient number and short follow-up, the results suggest that re-ESD is a safe and effective endoscopic treatment for recurrent gastric cancer after ESD.

Core tip: Although endoscopic submucosal dissection (ESD) is widely accepted as one of the standard treatments for early gastric cancers, there are few reports on re-ESD in the literature. This study clarifies that re-ESD is a safe and effective endoscopic treatment for locally recurrent gastric cancers after ESD.

There is currently no established standard treatment for these recurrent lesions, and there are few reports on repeated ESD (re-ESD) procedures. Therefore, the aim of the present study was to clarify the safety and efficacy of re-ESD for locally recurrent gastric cancers.

The clinical database of all patients who underwent ESD for EGCs at St. Luke’s International Hospital, Tokyo was retrospectively reviewed. Gastric ESD was performed in a total of 521 consecutive patients with 616 lesions and re-ESD was performed in five locally recurrent gastric cancers between April 2004 and November 2012. Gastric cancer treatment guidelines were applied to all re-ESD cases including those issued in 2004 and 2010 by the Japanese Gastric Cancer Association as well as the proposed extended criteria of Gotoda et al[17,18].

Re-ESD was performed with a conventional single-accessory-channel endoscope (GIF-Q260J; Olympus Medical Systems, Tokyo, Japan). Marking dots for the incision were made 3-5 mm outside of lesion margins with a flex knife[19-21] (Flex KnifeTM, KD-630L; Olympus Medical Systems, Tokyo, Japan) (Figure 1A and B). A solution of 0.4%-0.5% sodium hyaluronate was injected into the submucosal layer beneath the lesion, and circumferential incisions were made around the marking dots with a flex knife. In cases where severe fibrosis prevented injection of the sodium hyaluronate solution, a hook knife (Hook Knife, KD-620LR; Olympus Medical Systems) was used for the dissection of the fibrotic layer[22-24] (Figure 1C). Hemostatic forceps (SDB2422; Pentax Co, Tokyo, Japan) were used during the procedure to control bleeding while the re-ESD was completed (Figures 2 and 3).

Figure 1 Conventional endoscopic view. A: Showing locally recurrent gastric cancer located in the lesser curvature of the gastric angulus; B: Marking dots for the incision delineating the outside margin of the lesion; C: Severe submucosal fibrosis was observed through a small-caliber transparent hood (arrow). 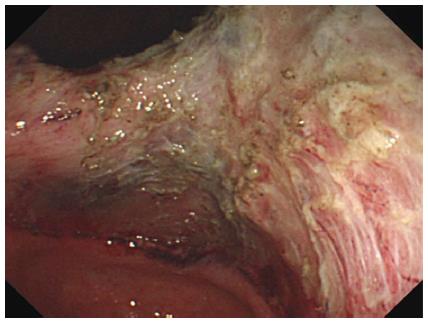 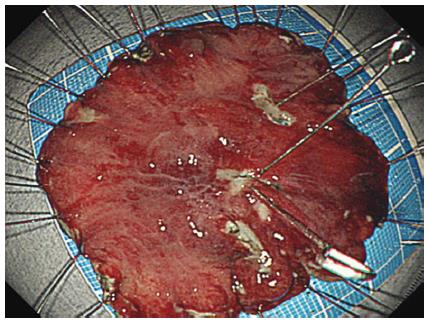 Figure 3 En bloc resection of the tumor without any complications.
Pathological assessment

Perpendicular sections at 2 mm intervals of re-ESD specimens were evaluated. Treatment was considered curative if specimens did not indicate invasion deeper than the submucosal or lymphovascular layer or show lateral and vertical margin involvement. En bloc resection was defined as resection of the entire lesion in one piece. All resections were categorized according to the National Comprehensive Cancer Network (NCCN) as follows: negative resection margin (R0), microscopic tumor infiltration (R1), and macroscopic residual tumor (R2). Endoscopic examinations and computed tomography (CT) were performed at 6 mo after re-ESD to check for local recurrence as well as lymph node and distant metastases.

The characteristics of the initial ESD for 5 cases are summarized in Table 1. One patient was considered R1 with positive horizontal margins, but others were considered R0 with complete resection. Of the initial ESD procedures evaluated, 97.6% (601/616) were en bloc resections, 1.3% (8/616) required additional surgical intervention due to an incomplete resection (such as deep invasion of the tumor or lymph vascular invasion), 1.3% (8/616) resulted in postoperative bleeding, and 1.8% (11/616) had perforation. Pathological evaluation resulted in categorization of 95.3% (587/616) of resections as R0, with the remaining 4.7% (29/616) as R1 resections.

Five of the 616 cases developed locally recurrent tumors and were treated by re-ESD (Table 2). The median time interval from the initial ESD to re-ESD was 14 (range, 4-44 mo). En bloc resections with free lateral and vertical margins were successfully performed without any complications in all re-ESD cases. Furthermore, there were no local or distant recurrences observed during the follow-up period, at a median of 48 (range, 11-56 mo). There was no significant difference in tumor size between re-ESD cases and all initial cases (22 mm vs 11 mm). However, there was a tendency for increased operation time for ESD procedures (202 min vs 67 min, P = 0.06), and re-ESD specimens were significantly larger than the initial resected specimens (47 mm vs 34 mm, P = 0.02) (Table 3).

ESD is accepted as one of the standard treatments for EGCs, enabling large en bloc resections. While this procedure typically results in histologically complete resections, cases of locally recurrent gastric tumors have occurred, with reported incidence rates between 0% and 3%[14-16,25]. Laparoscopic wedge resection, intragastric surgery, and laparoscopic-associated distal gastrectomy are some of the invasive treatment options for locally recurrent gastric cancers[26-28]. A recent report by Higashimaya et al[25] documented re-ESD as a minimally invasive, safe and effective procedure in a series of recurrent EGCs. In this study, re-ESD was successfully performed by en bloc resection with free lateral and vertical margins without any complications. Treatment of locally recurrent gastric cancers using the re-ESD technique results in less pain, less mortality, and shorter hospital stays, which obviates invasive surgical interventions.

Re-ESD operations tended to take longer than the initial ESD procedures, possibly because the tumor specimens were larger in size. The re-ESD procedure is considered technically difficult as a result of severe fibrosis in the submucosal layer that occurs at the site of the initial ESD. There is currently no efficient ESD method for lesions with submucosal fibrosis, therefore the surrounding tissue should first be dissected to evaluate the anatomical structure, followed by dissection towards the fibrotic lesion. Of additional importance in performing ESD and re-ESD procedures is the selection of an appropriate electrosurgical knife, such as a flash knife, flex knife, dual knife, or as in this study, the hook knife, which was used to dissect the submucosal layer with severe fibrosis.

Several limitations of this study should be noted. First, the study was of a retrospective design involving a limited number of cases from a single center, as the recurrence rate after ESD is very low. Second, even though experienced endoscopists performed the re-ESDs, the success rate depends on the technical proficiency of the endoscopists and the condition of the lesion. Although structural differences may result in variations in technical difficulty, this study did not establish whether the location of the lesion or macroscopic type affects the difficulty of the procedure.

In conclusion, this study demonstrates that re-ESD is a safe and effective endoscopic treatment for locally recurrent gastric cancer after ESD. As a result of the limited case number, further studies evaluating larger sample sizes and longer follow-ups are needed to assess the use of this procedure as a standard treatment for recurrent gastric tumors.

Endoscopic resection has been accepted as a minimally invasive treatment for early gastrointestinal neoplasms. Endoscopic submucosal dissection (ESD) allows for the dissection of the submucosa with resection of lesions en bloc. Although complete resection is expected in this procedure, incidences of local recurrence after the initial ESD are not fully eliminated. There is currently no standard treatment for these locally recurrent gastric cancers.

Repeat ESD for locally recurrent gastric tumors is not yet considered a standard treatment. This study demonstrates the safety and efficacy of the re-ESD technique. Furthermore, comparisons were made of tumor size, resected specimen size, and operation time between initial ESD and re-ESD procedures.

By demonstrating that re-ESD is a safe and effective therapy, this study presents a strategy for the treatment of patients with recurrent gastric tumors.

ESD is a minimally invasive endoscopic technique for the treatment of early gastrointestinal neoplasms allowing direct dissection of the submucosal layer of the lesion with en bloc resection. Re-ESD is an endoscopic treatment technique for gastric tumors that locally recur after an initial ESD.