Endoscopic celiac plexus neurolysis (CPN) has become the procedure of choice for the management of patients with pancreatic cancer and abdominal pain unresponsive to medical treatment. It is necessary to differentiate between CPN and endoscopic celiac plexus block performed in patients with benign disease. In this review we describe the technique of this procedure with special emphasis on technical details.

Intra-abdominal malignancies, particularly pancreatic cancer, elicit pain that often necessitates opioid administration[1]. Despite their relative effectiveness for pain relief, opioids are not devoid of adverse effects such as drowsiness, delirium, dry mouth, anorexia, constipation, nausea and vomiting[2]. Therefore, more invasive non-pharmacologic methods such as celiac plexus neurolysis (CPN) have been used to alleviate the pain and consequently reduce the risk of drug-induced adverse effects. CPN is a technique whereby alcohol is injected to “permanently” destroy the celiac plexus in abdominal malignancies, particularly pancreatic cancer. It is important to differentiate CPN from celiac plexus block (CPB) whereby the celiac plexus function is temporally hindered by steroids (or less commonly alcohol) in other non-neoplastic diseases such as chronic pancreatitis. It is also worthwhile mentioning that the splanchnic nerves and the celiac plexus are two distinct anatomical structures. The first is situated superior to the diaphragm and anterior to the 12th thoracic vertebra while the latter is located inferior to the diaphragm surrounding the origin of the celiac trunk. The celiac plexus plays a vital role in the transmission of the pain sensation originating from most of the abdominal viscera (including the pancreas) except the left colon, rectum and pelvic organs[3].

As mentioned above, CPN involves the destruction of the sympathetic plexus by injecting alcohol near the celiac axis. Pain is one of the common symptoms in advanced pancreatic cancer reported by up to 90% of patients. In a previously published meta-analysis, radiological CPN was effective in controlling pain in 70%-90% of patients. However, this approach was associated with serious complications such as paraplegia, paraesthesia and pneumothorax in 1% of patients[4]. The advantage of endoscopic ultrasonography (EUS) guided CPN is that EUS can safely access the ganglia anteriorly through the posterior stomach wall thus avoiding major arteries, diaphragm and the pleura using real-time imaging and color Doppler[5]. EUS has emerged as the test of choice for imaging the gut wall and surrounding structures. It couples a high frequency ultrasound probe with an oblique viewing endoscopic instrument therefore permitting the endoscopist to obtain good imaging of the pancreatic parenchyma and surrounding structures. This imaging modality is now accepted as the technique of choice for the evaluation of pancreatic disease, diagnosis and staging of pancreatic cancer and pancreatic neuroendocrine neoplasias[6].

The procedure is performed under deep sedation usually under the supervision of an anesthesiologist or a trained gastroenterologist who is well informed about deep sedation and its complications (with nursing assistance). Patients on anticoagulants and/or antiplatelet agents should stop them to allow normalization of hemostasis prior to the procedure. The patient is usually placed on the left lateral decubitus position and given intravenous hydration with normal saline to counteract the orthostasis that may arise from splanchnic blood pooling post-EUS-CPN. Using endoscopic view, the linear EUS is passed into the proximal stomach reaching the lesser curvature. Then the probe is lightly pushed against the stomach wall after posterior rotation to allow the identification of the aorta (anechoic tube structure in a longitudinal plane) and the take-off of the celiac axis (Figure 1). Then the endoscopist can verify these vascular structures using color doppler. The instrument is then advanced and the celiac artery is identified as the first vessel arising from the aorta below the diaphragm. The celiac plexus is not seen as a discrete structure but its location is determined relative to the celiac trunk. However, over the past few years, there has been increasing evidence that the celiac ganglia may be identifiable via EUS. These are usually seen anterior to the aorta (slightly to the left), cephalad to the celiac artery take-off and medial to the left adrenal gland. They appear as hypoechoic, oblong or lobulated structures, often with irregular edges and usually contain hyperechoic foci or strands[7-9]. Once the base of the celiac trunk is identified, an EUS-FNA needle is passed through the biopsy channel and secured to the luer-lock assembly. A 22- or 19-gauge needle is usually used, but in some countries a dedicated 20-gauge ‘‘spray’’ needle with multiple side holes (EUSN-20-CPN; Cook Endoscopy, Winston-Salem, NC) is available and allows solutions to be spread over a larger area. The larger caliber of this needle also means that less force needs to be applied to inject the relatively large volumes. The next step is to advance the needle under real-time EUS imaging through the posterior wall of the stomach immediately adjacent and anterior to the lateral aspect of the aorta at the level of the celiac trunk. When in place, the inner sheet of the needle is removed and an aspiration test should be done to rule out vessel penetration before injection. Then the needle needs to be flushed with normal saline to remove any tissue from its tip. Usually 5-10 mL of a local analgesic (bupivacaine 0.25%) is injected followed by 10-20 mL of a neurolytic agent (98% dehydrated ethanol) which will produce an echogenic cloud. Self-limited complications can occur such as transient diarrhea (10%-30%) and orthostatic hypotension (10%-60%)[5,7]. 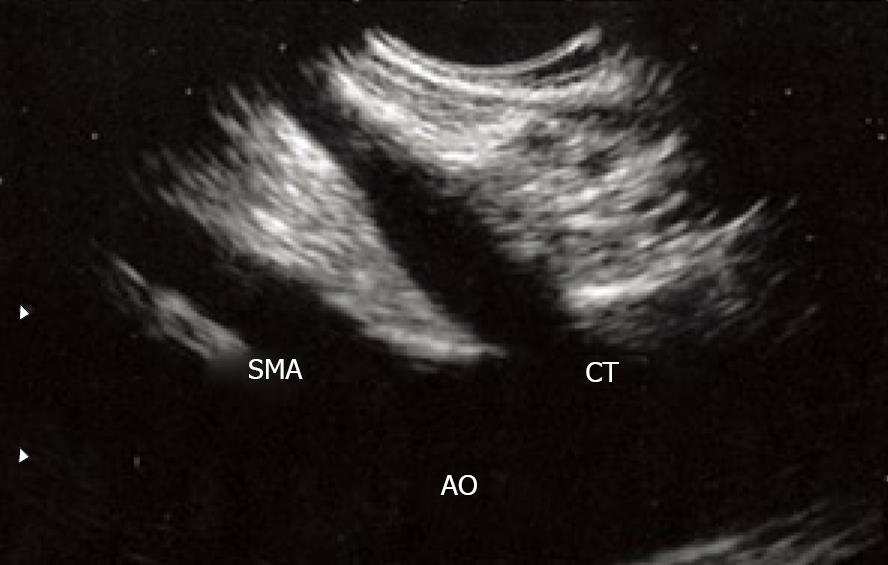 In 1914, Kappis first described the classical method of CPN[10,11]. Further attempts have been made to improve the accuracy of needle insertion for better pain control and for minimizing the procedure-related complications. There are different needle-insertion techniques, radiologic guidance and chemical composition of the injectate. Earlier studies on percutaneous CPN showed conflicting results. In one meta-analysis[12], percutaneous CPN resulted in sufficient pain relief while another meta-analysis[13] concluded that the CPN data were insufficient to judge the efficacy and long-term morbidities. In a more recent meta-analysis on CPN[4] where the cancer type was identified in 1117 patients (63% of which were pancreatic), 89% of patients reported good-to-excellent pain relief during the first couple of weeks after the CPN procedure. At 3 mo, around 90% of patients reported partial-to-complete pain relief regardless of the technique used and 70%-90% at the time of death. Local pain (96%), diarrhea (44%) and hypotension (38%) were the adverse effects reported but were mild and transient. Recently, Polati et al[14] prospectively randomized 24 patients with pancreatic cancer in a double-blinded study to receive percutaneous CPN. There was a signiﬁcant reduction in analgesic use and drug-related adverse effects in the study group compared to those who received medical therapy alone. The major drawback of percutaneous CPN is a 1%-2% major complication rate. Among these complications are paraesthesia of lower extremities, paraplegia, injury of adjacent organs, gastroparesis and diarrhea[15,16]. More severe neurologic complications may also occur resulting from spinal cord ischemia due to damage to the arterial blood supply[17,18].

Initially, EUS had radial scanning probes providing only scanning planes perpendicular to the longitudinal axis of the endoscopic instrument which limits the ability of the endoscopist to follow the route of a needle device from the opening of the working channel to a target area. This was overcome by the introduction of linear-scanning echoendoscopes in the early 1990s which provide a scanning plane along the same longitudinal axis as the endoscope, i.e. on the same axis of the working channel. The earliest report published on EUS-guided CPN was on 30 patients, 83% of which had pancreatic cancer[19] followed by a prospective study on 58 patients with inoperable pancreatic cancer[10]. 78% reported a drop in pain score 2 wk after the procedure and this pain relief was sustained for a follow-up period of 24 wk. It was noted that if the treatment was combined with chemoradiation or chemotherapy, the decrease in the pain scores was significantly higher compared to patients who did not undergo any additional therapy[10]. Only minor complications were reported and were transient in nature (hypotension 20%, diarrhea 17% and pain exacerbation 9%). A recent meta-analysis revealed that the pooled proportion of patients with pancreatic cancer that showed pain relief with EUS-CPN was around 80%[20]. Recent data suggests that bilateral CPN is more effective than central CPN but on rare occasions can cause trauma to the left adrenal artery[21].

The role of EUS-CPN for chronic pancreatitis pain is not clear. Two studies[22,23] addressed the role of EUS-CPB for chronic pancreatitis. The first study showed a 55% pain reduction of the 90 patients after 7 d[22]. Unfortunately, only 25% continued to be pain-free after 12 wk. The second study compared EUS to CT-CPB[23]. This showed a 40% reduction in pain score at 8 weeks for the EUS-CPB group (30% at 24 wk) and 25% benefit for the CT-CPB group. In chronic pancreatitis, pain is controlled in only 50% of cases and only minority of these patients (10%) show persistent benefit at 24 wk[24].

The possible advantages of EUS-CPN compared to percutaneous CPN is the ability to accurately place the needle in the target area due to the proximity of the posterior gastric wall to the celiac plexus and the availability of color doppler to assess and avoid vascular structures. Relative contraindications to EUS-CPN include anatomical distortion from previous surgeries or congenital malformations that make the access more difficult. Absolute contraindications for EUS-CPN are the same as in any other invasive procedure: coagulopathy, platelets < 50 000 and uncooperative patients.

In summary, EUS-CPN is an easy to perform and relatively safe procedure for the palliation of pancreatic cancer-related pain especially if combined with chemoradiation therapy. Though many questions remain to be addressed by prospective randomized trials, there is evidence to support the ongoing use of EUS-CPN/CPB and its further development. Randomized trials are required to identify the most optimal technique for performing CPN, the best timing for the procedure and the differences in treatment efficacy between scheduled versus on demand CPN.