Stent insertion in strictures in the upper cervical esophagus present special difficulties, such as patient discomfort and worry due to continuous neck globus sensation and a metallic taste. Additionally, the endoscopist needs to have great skill to properly adjust the proximal stent end. We present the experience of stenting high cervical esophageal strictures with a self-expanding plastic stent (Polyflex), in three tumoral and one postoperative benign stenosis. Dysphagia disappeared and the endoprosthesis was well tolerated. The Polyflex stent seems to be suitable for insertion in the upper esophagus.

Cervical esophageal strictures are a therapeutic challenge. Despite the fact that endoscopic dilation will solve most of the benign stricture cases and small fistulas will eventually heal, some difficult to manage, severe strictures will remain in some patients. In addition, palliation of dysphagia in tumoral stenosis frequently needs some kind of stenting apart from other therapeutic modalities such as radiotherapy.

The use of self-expanding metal stents (SEMS) in cervical stenosis or fistulas is somewhat limited due to severe cervical pain, globus sensation, bleeding, migration and patient intolerance. Additionally, the endoscopist needs to have great skill to properly adjust the proximal stent end. Recently, a self-expanding plastic stent (SEPS), namely Polyflex, was designed for palliation of strictures in the digestive tract[1]. We present the experience of stenting four high cervical esophageal strictures with the Polyflex endoprosthesis.

Patient characteristics are shown in Table 1. Tumoral strictures were caused by primary esophageal cancer in two occasions and metastasis/compression of lung cancer in one case (patient 4, Table 1). In Figure 1A a tumoral stricture in the cervical esophagus, close to the upper esophageal sphincter is shown. The benign postoperative stricture was due to esophagectomy for mid-portion esophageal cancer. Dysphagia was severe in all patients who were virtually unable to drink liquids. The sizes of the Polyflex employed were 9 cm length and 16 mm width (with 20 mm in the upper flared portion). 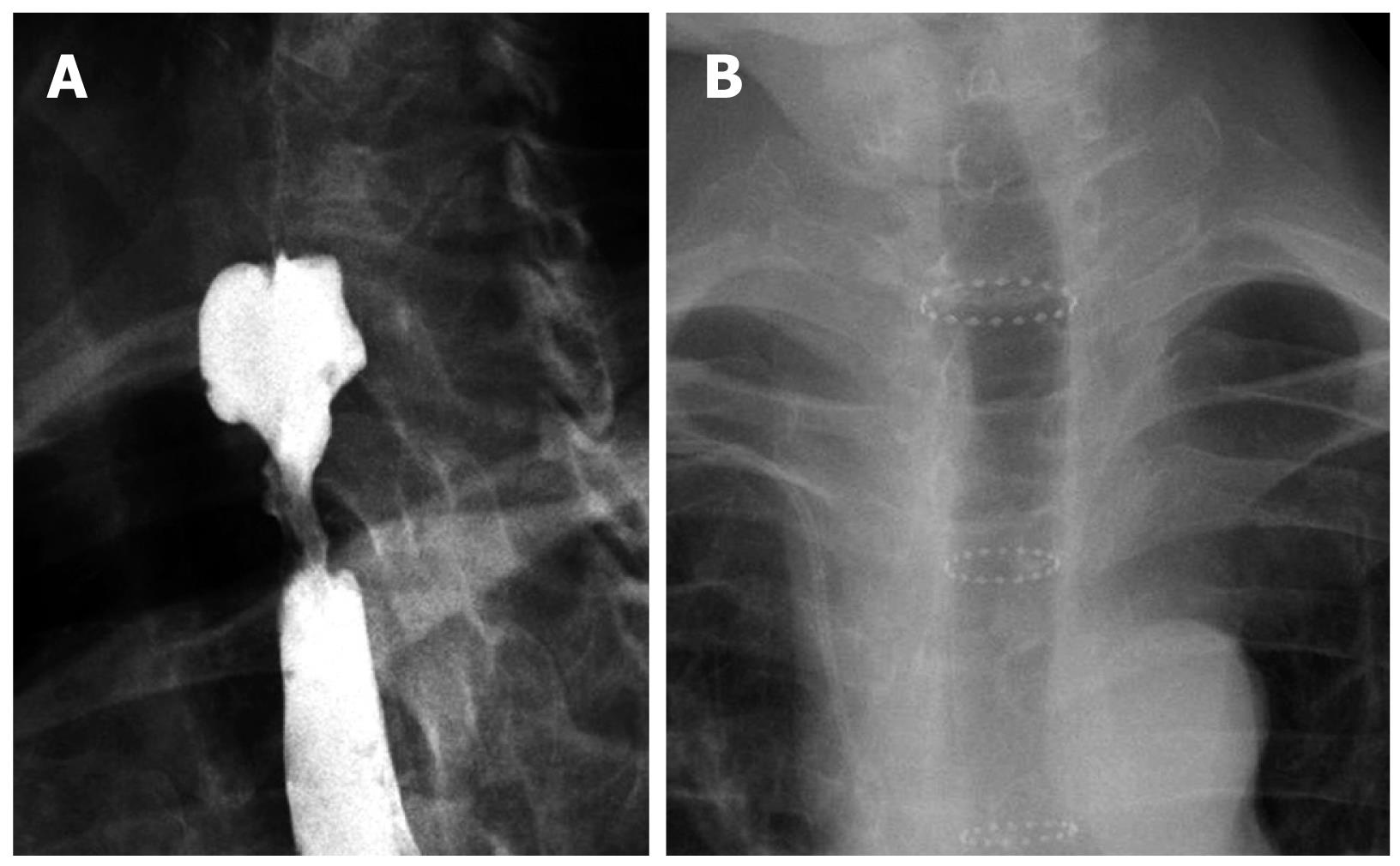 Figure 1 Radiograph of the stricture and Polyflex in the upper esophagus. A: Malignant stricture; B: Polyflex.

Polyflex insertion was monitored endoscopically, as previously reported by us, for peptic strictures in the lower esophagus[2]. Briefly, the insertion manoeuvre was as follows, an ultrathin gastroscope (Pentax EG-1870 K) with an outer diameter of 6 mm was passed into the stomach. A Savary guide wire was then inserted through the working channel and left inside the gastric cavity, and the ultrathin gastroscope was withdrawn. Dilation was performed with Savary bougies or neumatic balloons, to a diameter of 10-12 mm. Next, the Polyflex, after being loaded into the applicator, was passed over the guide wire, traversing the stricture. Below the distal tip of the pusher, the blue radio-opaque marks of the upper part of the stent were seen. A mark with a felt-tipped pen can be made on the pusher to indicate the level of the upper part of the SEPS. This level was maintained as the stent was released several centimeters above the Killian´s mouth.

Figure 2A shows the Polyflex stent, loaded into the applicator that has passed into the esophagus and is visualized with an ultrathin gastroscope positioned alongside the applicator in the hypopharynx. The vocal cords lay before the applicator but are not seen from this position. A blue mark has been made on the distal tip of the pusher, corresponding to the upper level of the stent. During the release manoeuvre this blue mark has to be kept several centimeters above the Killian’s mouth. The outer sheath of the applicator is gently removed, while keeping the upper end of the stent in the desired position above the stricture, until complete deployment of the Polyflex has been achieved. 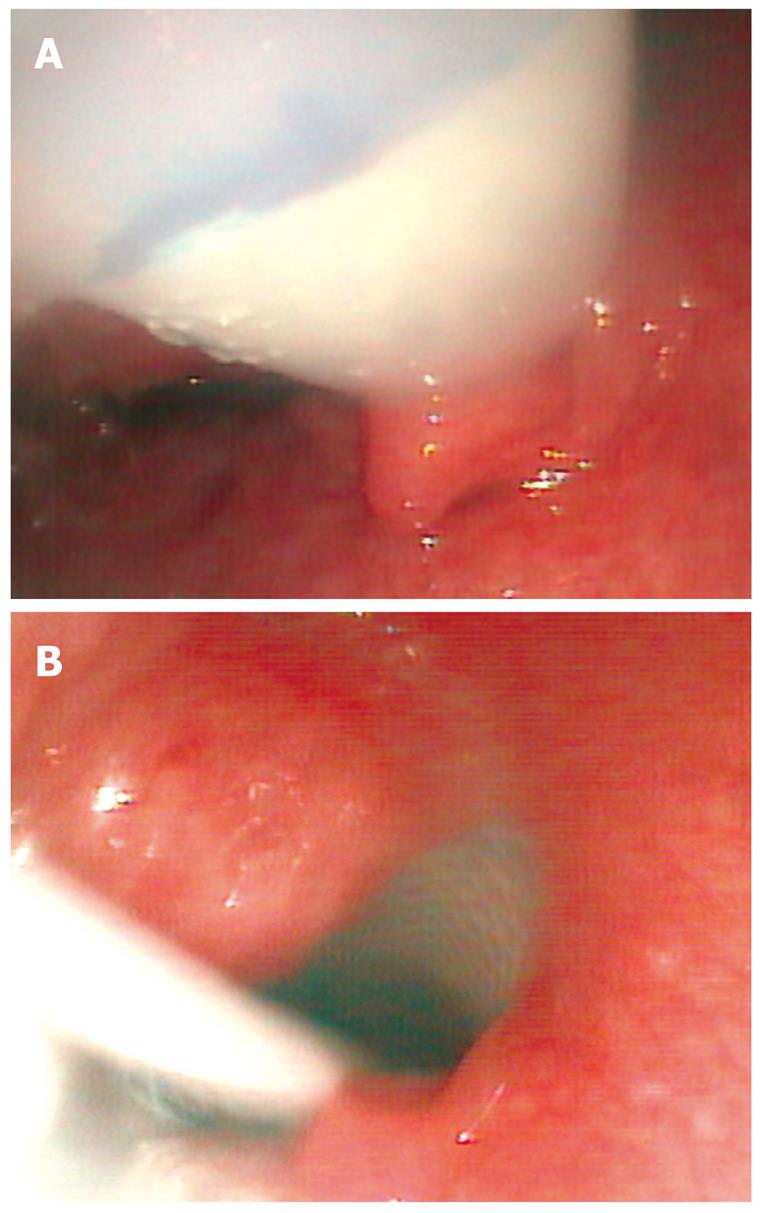 Therefore, the key point for proper placement is to maintain the proximal end of the stent in all cases immediately below the Killian’s mouth and check the stent release with the ultrathin endoscope placed in the hypopharynx.

After suitable complete Polyflex deployment the upper part of the stent is typically positioned just below the Killian’s mouth. In Figure 2B complete Polyflex release is seen. The plastic rod on which the folded stent was mounted is still visible from the hypopharynx.

After insertion only mild pain was observed in one patient. Dysphagia disappeared and patients were able to eat. Radiographs were taken at the end of the procedure and for follow up when necessary. In Figure 2B a Self-expanding plastic stent (Polyflex, 9 cm length × 16 mm diameter, 20 mm in the upper flared portion) has been placed in the upper esophagus. Nearly the entire endoprosthesis is radiolucent, except for three crowns of radiopaque material placed at both ends and in the middle of the stent (Figure 1B).

Stent migration occurred in one neoplastic stricture after chemotherapy and in the benign stricture after achieving permanent dilation. Thus no further stenting was necessary. On follow up radiographs stents were seen in the stomach and were easily removed endoscopically. Stricture dilation was also assessed during these endoscopies. The remaining two patients having tumoral stenosis died several months after stent insertion without complaining of dysphagia. As they were able to eat and had many other medical problems, doctors in charge did not check stent position on follow up radiographs.

Stent insertion in strictures in the upper cervical esophagus presents special difficulties, such as patient discomfort and worry due to continuous neck globus sensation and a metallic taste. Nevertheless, SEMS have been employed in this setting in specialized tertiary centers, emphasizing that physician experience with stent placement is important and is likely to influence patient outcome in this particularly challenging group of patients where precision in stent deployment is essential[3].

The Polyflex endoprosthesis, a SEPS, was made available several years ago, as an adequate stent to achieve and maintain patency in benign or malignant gastrointestinal strictures[4]. The Polyflex stent has the advantage of easy removal. In the event of incorrect insertion, it can be extracted and reinserted during the same session. This is one of the most important factors in its increasingly widespread use, apart from having much less granulation tissue reaction at the ends of the endoprosthesis than SEMS. These facts make plastic stents removable.

In contrast to older esophageal plastic stents, the Polyflex stent is a self-expanding endoprosthesis. Consequently, it is inserted at a smaller diameter, requiring minimal stricture dilation prior to the procedure. When compared to SEMS, plastic stents have the disadvantage of a so-called “memory” or the tendency to revert to their original shape (length, diameter) after they have been compressed to facilitate insertion. SEMS are manufactured and then packed in the “reduced” size, ready for insertion. In contrast, SEPS must be loaded into the introducing device immediately before insertion because a longstanding contraction damages the plastic material. This procedure can appear complex initially but is easily performed once experience has been gained.

Although this study is limited to a small number of patients, tolerance to Polyflex in the upper esophagus appeared to be good and suitable for managing these strictures. Furthermore, if the Polyflex is not properly adjusted during insertion, it can be extracted, loaded again into the applicator and reinserted during the same session. This is an important fact in complex cases or when the endoscopist does not have extensive experience.