Adequate screening methods can decrease colorectal cancer (CRC) mortality. The guaiac test for fecal occult-blood (FOBT) is part of the German CRC Screening Program since 1970 and has evidence level Ia. In randomized multicenter-studies FOBT has an average sensitivity of 24% and decreases CRC mortality up to 30%. Immunological tests for human haemoglobin (iFOBT) show better performance characteristics than guaiac FOBT, with augmented sensitivity and specificity. However, the single tests show wide differences in diagnostic performance and iFOBT is not yet covered by insurance companies although it should replace the guaiac test for CRC screening. Visual colonoscopy, which was introduced to the German National Cancer Screening Program in 2002, is the gold standard for the diagnosis of colorectal neoplasia. From 2003 to 2007 more than 2.8 million examinations have been documented in Germany. The prevalence of adenomas is around 20% and of CRC about 0.7% to 1.0% of the screenings. Seventy percent of the carcinomas detected during screening are in an early stage (UICC I and II). Furthermore, screening colonoscopy is a cost saving procedure with a low complication rate (0.25% overall). Insurance companies save 216€ for each screening colonoscopy mainly by prevention of neoplasia due to polypectomy. In Germany, virtual colonography by computed tomography (CT) or magnetic resonance imaging still lacks standardization of the hard and software. In experienced centres the sensitivity for CRC and large polyps of CT colonography is comparable to colonoscopy but in meta-analyses the ranking is lower. New technologies like computer-aided colonoscopies with sheath or double balloon techniques are coming up as well as capsule colonoscopy, which sensitivity for large polyps is about 70%. Advised by his physician, the patient can choose his most acceptable examination method from this whole set of screening tools.

With about 71 400 new occurrences, Germany is among the countries with the highest incidence (71/100 000 males and 50/110 0000 females) and mortality rates (30 000 annually) of colorectal carcinoma (CRC). Since the CRC emanates over a time span of 10-15 years from a benign precursor (Adenoma), screening offers an immense opportunity to prevent this malignancy. This review is not about primary prevention like pharmaceuticals or modification of the way of life, but solely about the methods of secondary prevention, excluding DNA testing.

The Guaiac-Test for fecal occult blood test (FOBT) was included to the German CRC Screening Program in the 1970’s. If used regularly, FOBT has evidence level Ia for reducing CRC mortality of about 30%[1-4]. FOBT measures peroxidase activity of the haemoglobin. But this reaction is not specific since the peroxidase of herbal or carnal aliments reacts as well. A great disadvantage of FOBT is its low sensitivity for carcinomas or large polyps, which can only be compensated by annual repetition.

Due to the low sensitivity and specificity of the FOBT, immunological tests for human haemoglobin (iFOBT) were developed. Using a monoclonal antibody, iFOBT can specifically identify human haemoglobin without interfering with carnal proteins or herbal peroxidase. Another advantage of iFOBT is the quantitative interpretation of the results, and thus being able to define a cut-off range for standard values depending on the examined population. For CRC iFOBT has a sensitivity of 66%-95%[5-8], however iFOBT was only obtained on one day. On firsthand comparison, iFOBT showed an increased sensitivity and specificity than FOBT[6-20] and higher rates of detection for colorectal neoplasia[9,14,16,20].

Significant differences in the analytical performance among iFOBT methods were found[15,21]. Careful method validation and selection of a method with appropriate sensitivity and specificity is therefore essential in colorectal cancer screening. Attention has to be paid to the sampling of feces, as haemoglobin is progressively degraded over time and undetectable after 10 d. This can only be avoided if feces are immediately deep frozen or collected in iFOBT collection devices[22]. Another way to avoid rapid degradation of hemoglobin is to determine the more stable hemoglobin-haptoglobin complex in stool, which was shown to have a higher sensitivity towards adenomas[23]. Higher costs for immunological tests could be compensated by the increased sensitivity and therefore higher detection rate of colorectal neoplasia[24]. In Japan, iFOBT analyzed on 2 d is used for the National Cancer Screening Program. In a case-control study the odds-ratio (OR) of patients dying from colorectal cancer was 0.2 for those screened with the iFOBT[25]. Even a small percentage of little adenomas in men were detected by iFOBT[26]. Therefore, the immunological test should replace guaiac FOBT.

In two studies tumor pyruvate kinase isoenzyme M2 was shown to have no supplemental value for screening because of a lower sensitivity and specificity[27,28] compared to iFOBT.

Germany was the first country to introduce preventative colonoscopy to the National Cancer Screening Program in 2002. Until then, no direct evidence for a reduction of mortality existed for this method. Yet, sigmoidoscopy studies[29-31] and case-controlled studies showed indirect evidence for the correctness of this assumption[32,33]. The first analysis of screening colonoscopy in Germany showed a prevalence of 20% for adenomas, 6.1% for advanced adenomas, and 0.7% for CRC[34]. These results are consistent with further studies analyzing screening colonoscopy[8,35-40]; however, one has to account that the study population varies individually. For instance, it is known that the risk for colorectal neoplasia is elevated for men, and it rises with increasing age[34,41]. It is important to note that the majority of carcinomas (70% total) found during screening colonoscopy are detected at an early stage (UICC I and II). Thus it is understandable that these carcinomas found during screening accompany a considerably better prognosis than carcinomas found during the clarification of symptoms, as a recent study has proven[42]. An important feature is the safety of a screening method as the examination is performed in healthy adults. Screening colonoscopy in Germany was shown to be a safe method. Perforations occurred in 0.02%-0.03% of the examinations, bleedings in 0.15%-0.17% and cardiovascular events in 0.06%-0.1%[34,43]. Similarly low rates of adverse effects were shown for outpatient colonoscopy in Germany some years ago[44]. A limitation of optical colonoscopy is the miss rate for large adenomas from 2.1% to 6%[45-49]. Poor colonic cleansing[50] or short withdrawal times[51] may contribute to the problem.

By detection and endoscopic resection of early stage adenomas, the successive development of cancer can be prevented. This results in a savings of 216 € in Germany for each screening colonoscopy[52]. One problem of screening colonoscopy in Germany is the low compliance rate. From 2003 to 2007 more than 2.8 million screening colonoscopies were performed. In the age group of 55-74 years, 15.1% of the women and 13.4% of the men were participating within 5 years[43]. This means that after 10 years, nearly 30% of the population will be examined, a number that may improve. However, screening colonoscopies account for only one third of the total rate of colonoscopies in Germany. A chance for compliance improvement may be the system of invitation, which has recently been introduced in the state of Saarland. A study in northern Italy has shown that 26.5% of the patients that received an invitation from their physician for different methods of screening participated in colonoscopy[53].

The common result of all studies is that there are no pathological findings in a majority of screening colonoscopies. The number of patients needed to screen in order to discover an adenoma is 9, for an advanced adenoma 23, and for a CRC 143[41]. Further studies need to define low risk subgroups for colorectal neoplasia, which suit better for a non-invasive method of screening, and high-risk subgroups that necessarily need screening colonoscopy.

In the past years, new technologies have been developed intending to abstain from sedation and to allow greater patient comfort. (1) Neo-Guide (Palo Alto, California) is a colonoscope built out of multiple flexible segments that adjust to the intestinal loops, preventing looping of the colonoscope. Biopsies can be taken, and the equipment can be reprocessed[57]; (2) ColonoSight (San Jose, California) has a new infeed system with an inflatable mantle. The parts of the endoscope resting at the colonic walls are disposable, so there is no time-consuming disinfection in between examinations. LED-illumination makes glass-fibre optics and external light sources redundant. Biopsies can be taken[58]; (3) Invendo (Weinheim, Germany) has a remote-controlled infeed with a new mantle technique. It is a disposable and biopsies can be taken[59]; (4) CathCam consists of a disposable catheter with multiple lumina, a 3 mm camera, 6 illuminating diodes, and has a total diameter of 11 mm. CathCam is inserted in the caecum with a lumen detecting guide wire. The guide wire is inserted through a colonoscope that reaches the sigma[60]; (5) Aeroscope (GI View, Israel) is a fully automated infeed system using the double balloon method. It runs with carbon dioxide pressure and reverses on its own once having reached the caecum. The system uses a 360-degree optic camera and a doctor does need to be present during the examination[61]. All new methods of colonoscopy have a high caecum rate of about 90% and sedation is usually not necessary; and (6) Pillcam Colon (Given Imaging, Israel). This newly developed colon capsule has a camera on both sides, taking two pictures per second. The images are recorded on an adaptor attached to the patient’s belt and can be viewed in vivo on a real-time monitor. After excretion of the capsule, which happens within 10 h, the data can be conveyed on a computer that creates video sequences. The method is completely painless and delivers pictures of the entire colon in good to excellent quality. The sensitivity for large polyps is about 70%[62,63]. The system was approved in Germany in 2008 and may be used for CRC screening in selected persons who are able to drink 4 liters of colon lavage[64].

For the foreseeable future, optical colonoscopy with the possibility of biopsy and polypectomy is likely to be the diagnostic test of choice in patients with positive screening tests. Colonoscopy should be the preferred screening method for high-risk groups (familial disposition, diabetes, adipositas, cigarette smoking etc). The entire band of possible methods forms a portfolio for screening, so that each patient advised by his family physician can choose his favourite one (Figure 1). 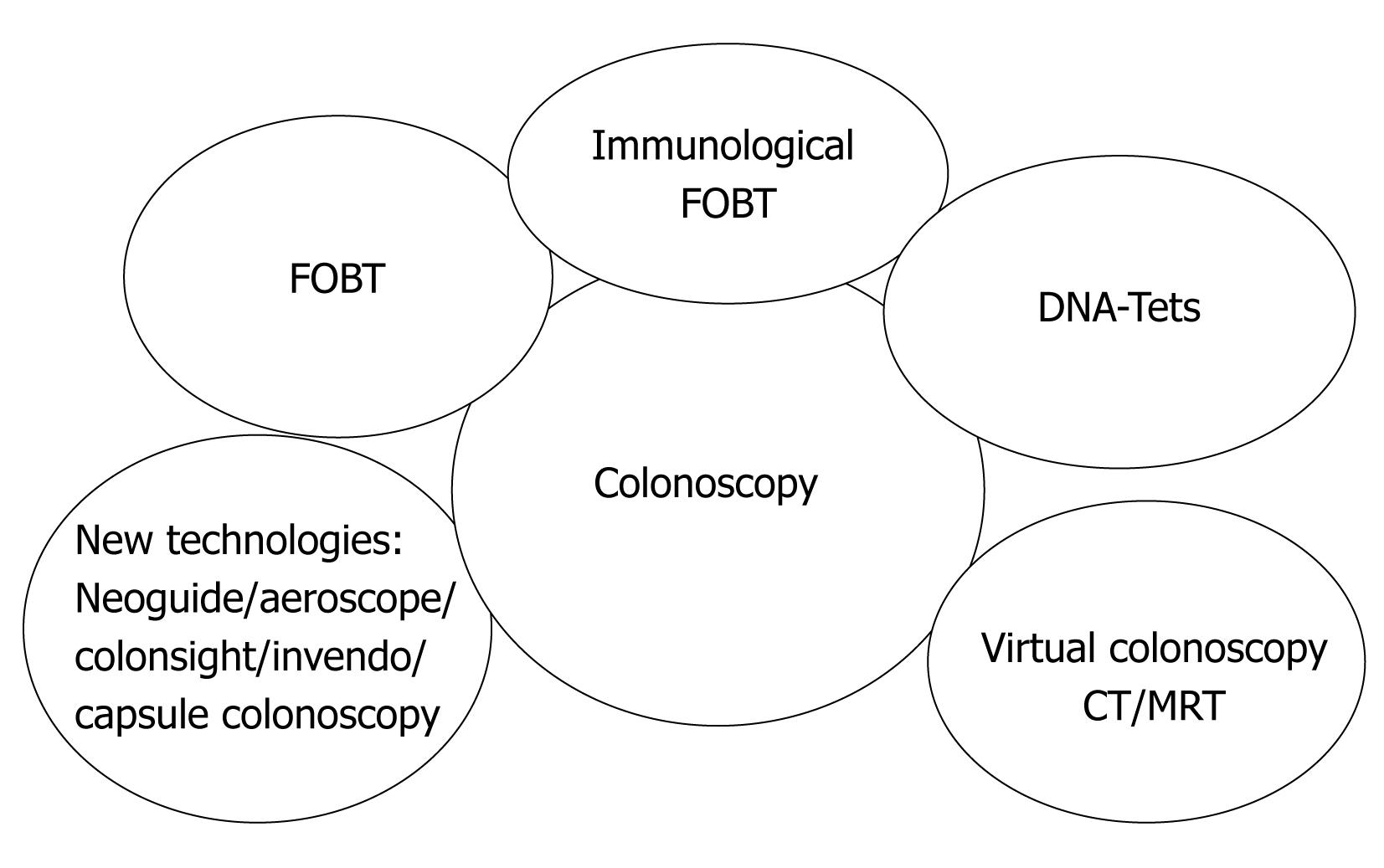