Drug induced liver injury is responsible for 50% of acute liver failure in developed countries. Ayurvedic and homeopathic medicine have been linked to liver injury. This case describes the first documented case of Punarnava mandur and Kanchnar guggulu causing drug induced liver injury. Drug induced liver injury may be difficult to diagnosis, but use of multi-modalities tools including the ACG algorithms, causative assessment scales, histological findings, and imaging, is recommended. Advanced imaging, such as magnetic resonance cholangiopancreatography, may possibly have a greater role than previously reported in literature.

Core tip: Drug induced liver injury is difficult to diagnose. Certain ayurvedic medications are commonly used without full knowledge of their side effects. This article not only represents the first documented case report of drug induced liver injury secondary to Punarnava mandur and Kanchnar guggulu, but it also demonstrates the possible role for advanced imaging modalities.

Complementary and alternative medicine in the form of herbal and homeopathic mediations have been used dating as far back as 2100 BC in ancient China and India. Their use has created a $180 billion market in United States[1]. Though some herbal medications are shown to cause drug induced liver injury (DILI) there are many others that may be implicated. Punarnaya mandur, extract from the Boerhavia diffusa plant, is commonly used in ayurvedic practice for iron deficiency, kidney, and liver pathologies[2]. Kanchnar guggulu, extract from Bauhinia variegate plant, is used for uterine fibroids and BPH. Both these medications have several unlisted uses and properties, but more specifically they can exhibit anti-inflammatory and hepatoprotective properties[3]. These two medications are widely used and have not previously been associated with DILI. DILI is often misdiagnosed or undiagnosed and herbal medications need to considered by healthcare providers as DILI is the most common cause of acute liver failure in the United States[4-6].

A 44-year-old female presented to the ED for 2 wk of painless jaundice associated with poor appetite, pale stools, and dark urine. She had a history of cholelithiasis diagnosed in India 6 mo prior to presenting to the ED. She began to use 3 different herbal and homeopathic medications, but reportedly stopped taking them after she noticed the jaundice. She denied any other medication use. She denied any alcohol, acetaminophen use, or a history of infectious hepatitis.

Her physical examination was remarkable for scleral icterus. Her admission labs demonstrated an aspartate aminotransferase (AST) 1092 U/L, alanine aminotransferase (ALT) 1185 U/L, total bilirubin 9.0 mg/dL, direct bilirubin 6.2, INR 1.8, and normal alkaline phosphatase (Alk P) of 118. A right upper quadrant ultrasound was ordered demonstrating a shadowing calculus in the gallbladder neck measuring 1.6 cm. There was 0.9 cm gallbladder wall thickening reported to be secondary to acute cholecystitis or a primary liver process. The hepatic ducts were nondilated, and the common bile duct measured 0.4 cm. A HIDA scan was performed revealing hepatic dysfunction. Given the initial 1.6 cm gallstone and hyperbilirubinemia, MRCP was ordered confirming a gallbladder neck stone, but no choledocholelithiasis. There was heterogeneous T2 enhancement of liver with no signs of hepatic steatosis (Figure 1). 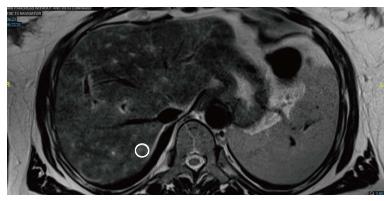 Viral serologies (hepatitis A, B, C, and E, HIV, cytomegalovirus) were negative. There was evidence of prior infection with EBV. Antinuclear antibody was weakly positive 1:40 titer in a speckled pattern. Anti-smooth muscle, anti-liver/kidney microsomal, and anti-mitochondrial antibodies were negative. There was an increased iron saturation of 61%, with normal ferritin, TIBC, ceruloplasmin. There was no HFE gene mutation detected.

Jaundice and laboratory values began to improve after one week. The patient was diagnosed with DILI secondary to herbal and homeopathic medication. Interestingly, her herbal and homeopathic medications (Punarnava Mandur, Kanchnar guggulu, and one unlabeled) were sent for toxicology analysis and came back negative for a match in their toxin database. Surgical consultation recommendations were outpatient follow up for elective cholecystectomy after the patients lab values normalized. Elective cholecystectomy was completed with a liver biopsy the following month.

Liver biopsy demonstrated mild portal chronic inflammation and interface activity with grade 3 bridging fibrosis. Ceroid-laden Kupffer cells were present in portal tracts. There was ballooning of hepatocytes consistent with injury. Plasma cells were not seen, but eosinophils were conspicuous. Overall, the histologic pattern was suggestive of drug hypersensitivity reaction with resolving hepatitis (Figure 2). 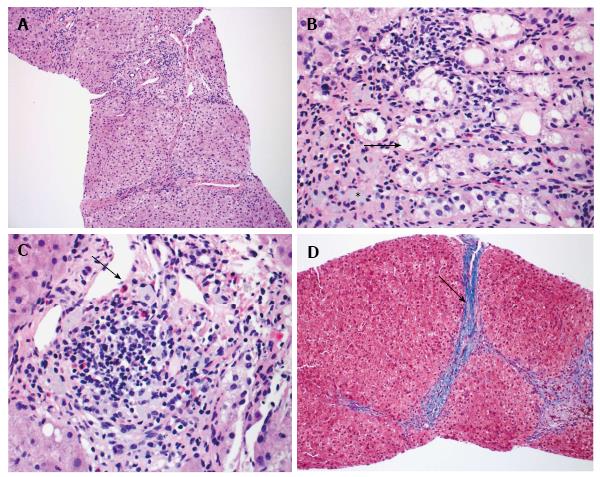 To evaluate suspected idiosyncratic drug induced injury there is no established gold standard. We recommend using a 2 step approach with the DILI algorithm recently proposed by ACG in combination with the Roussel Uclaf Causality Assessment Method (RUCAM)[7,8]. DILI is a diagnosis of exclusion and ACG algorithm provides an evidence based approach for a timely diagnosis of DILI due to herbal and dietary supplements. The RUCAM score is a system that assigns points for clinical, biochemical, serologic, and radiologic features of liver injury. This scores gives an overall likelihood that the hepatotoxicity is due to a medication.

After obtaining a thorough history and physical, the algorithm states the diagnostic approach can be tailored to liver injury patterns (hepatocellular, cholestatic, mixed) based off the R value. The R value is defined as serum ALT/upper limit of normal (ULN) divided by serum Alk P/ULN[7]. Our patient was categorized into the hepatocellular injury (R ≥ 5.0) column given the R value of 26. Then the first line testing with hepatitis serologies, autoimmune serologies, and imaging (abdominal ultrasound) was completed. Then second line testing of ceruloplasmin, less common serology (HEV, CMV, EBV) and liver biopsy was completed. This was combined with complete evaluation to exclude non-DILI causes. Literature review using PubMed and Livertox, and clinical judgement was conducted. This patient’s ANA was positive, but the titer was only 1:40, and this feature can be present in DILI. This is proven by a retrospective study that evaluated 29 patients with DILI and autoimmune hepatitis. It concluded that 7/21 DILI patients had positive ANA, but more so all 8/8 patients with autoimmune hepatitis had an ANA titer ≥ 1:80[9]. The patient’s RUCAM score was 5, which indicated a “possible” association with DILI. This helped to establish the diagnosis. The use of the imaging and importantly the histology helped to confirm the diagnosis.

Imaging is recommended for the evaluation of DILI; however the modality will differ based on clinical presentations. This patient, given her cholelithiasis, had a MRCP which demonstrated heterogeneous T2 enhancements of the liver. This finding has not been previously reported in literature for drug induced liver injury. There have been observations of T2 hyperintensities related to certain liver pathologies including hepatocellular carcinoma, cholangiocarcinoma, hepatic adenoma, hemangioma, mesenchymal hamartoma, metastatic disease[10]. These findings are usually more localized, unless the patient has underlying metastatic disease. This heterogeneous pattern T2 enhancement, though relatively nonspecific, may be a unique characteristic that is an underutilized diagnostic clue for DILI secondary to herbal and homeopathic mediations. This will need to be further studied in future DILI cases.

The histology for this patient helped in confirming the diagnosis. The interface activity and hepatocyte ballooning were consistent with liver injury and there was Kupffer cell activation. The Kupffer cells were ceroid laden, which is highly suggestive of DILI[11]. The repeated bouts of active liver injury led to bridging fibrosis over time[12]. Liver fibrosis can be associated with DILI, but interestingly some herbal medications are proposed treatments for fibrosis[13,14]. The prominent eosinophils are associated with DILI. There have been mice models demonstrating eosinophil accumulation during hepatic necrosis after certain medications[15]. After the offending agent was removed, the hepatitis began to resolve. These findings collectively were suggestive of a drug reaction and allowed to confirm a diagnosis of DILI.

The primary treatment for DILI includes withdrawal of the offending agent. If certain drugs are the causal agent, specific therapies such as N-acetylcysteine for acetaminophen toxicity or L-carnitine for valproic overdoses maybe beneficial[16]. For pruritus bile acid sequestrants or antihistamines may be utilized. For herbal and homeopathic medications the early recognition is important with subsequent withdrawal of the medication. The patient should be monitored with serial LFTs until normalization. For patients with acute liver failure early transfer to a transplant center may be warranted as this indicates a poor prognosis. Overall DILI is difficult to diagnose, the unique findings from our case will aid in future management and awareness of DILI secondary to complementary and alternative medications.

Patient with history of painless cholelithiasis and 6 mo use of herbal medication had worsening jaundice, scleral icterus.

Multiple imaging modalities were used, including right upper quadrant ultrasound demonstrating a gallbladder neck calculus, a HIDA scan demonstrating hepatic dysfunction with uptake in the gallbladder, and an magnetic resonance cholangiopancreatography confirming a gallbladder calculus, no choledocholelithiasis, and a unique heterogeneous T2 liver enhancement with no signs of hepatic steatosis.

After diagnosis of this condition, the major treatment was stopping the offending medication and monitoring with serial LFTs until normalization.

There have been case reports of herbal medication causing drug induced liver injury, but this case is unique because it represents the first documented case report of commonly used ayurvedic medications including Punarnava mandur and Kanchnar guggulu that was confirmed with biopsy and demonstrated unique imaging findings.

Drug induced liver injury (DILI) is a diagnosis of exclusion of a rare adverse medication herbal reaction causing jaundice, liver failure, or even death. Roussel Uclaf Causality Assessment Method is a scoring system that assigns points for clinical, biochemical, serologic, and radiologic findings to demonstrate the likelihood of medication induced hepatotoxicity. Magnetic resonance cholangiopancreatography is a magnetic resonance imaging exam that produces detailed images of the hepatobiliary and pancreatic systems via a noninvasive manner.

In order to diagnosis drug induced liver injury it is important to get a detailed history while implementing algorithms, causative assessment scales, histological findings, and imaging for all patients with unknown jaundice. DILI needs to be diagnosed early in order to prevent acute liver failure.