A 59-year-old man underwent liver radiofrequency ablation under laparotomy for recurrent hepatic carcinoma located in the caudate lobe, however, near-fatal bleeding occurred 1 wk after the operation. The intra-operative ultrasound study during laparotomy revealed left hepatic artery pseudoaneurysm. Suture and packing with ribbon gauze was used to obtain hemostasis. A secondary hemorrhage followed 11 h later and hepatic angiography was performed immediately. Bleeding from the pseudoaneurysm in a branch of the left hepatic artery was found and the artery branch was embolized with coils. Other than slight bile leakage, post-embolization continued satisfactorily. Bleeding did not reoccur. The follow up visit 1 mo later found the pseudoaneurysm disappearing and no tumor recurrence.

Liver radiofrequency (RF) ablation has been accepted as a safe and useful therapeutic option for treatment of both primary and secondary hepatic neoplasms[1]. The most common complication is bile leakage which necessitates abdominal drainage in about 3.3% of procedures[2]. The hemorrhagic complication is very rare, but can be catastrophic, and lead to death[3]. We encountered a case with massive bleeding following liver RF ablation treatment of a hepatic artery rupture. This report describes our experience in dealing with this type of complication.

A 59-year-old man who had received liver RF ablation 11 times previously was admitted to receive further liver RF ablation for treatment of a recurrent hepatic carcinoma. Liver RF ablation was performed in Jan 2011. He had hepatitis B-related liver cirrhosis. Child-Pugh score was class A. Coagulability was within the normal range (international normalized ratio, 1.06). At the time of liver RF ablation, 5 hepatic lesions were found. The α-fetoprotein level was elevated to 133 ng/mL. First we ablated 4 peripheral lesions, and the lesion located in caudate lobe was ablated finally (Figure 1). Liver RF ablation was done under laparotomy. Cool-tip RF electrodes (Radionics, Burlington, MA, United States) were placed in three different sites of the tumor. Then RF energy was applied for 15 min to each site. An abdominal tube was placed under the left hepatic lobe. Near-fatal bleeding developed 1 wk after RF ablation. 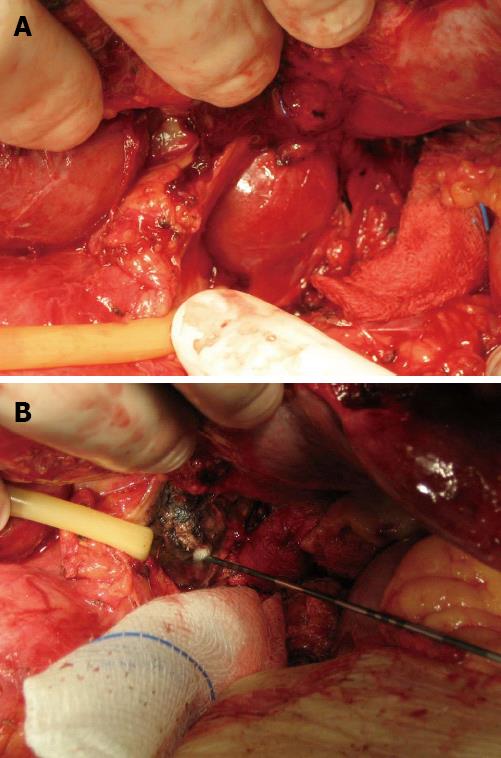 Vital signs were unstable; the patient presented with acute hemorrhagic shock immediately. The hemoglobin level decreased by 6 g/dL and the patient was transferred immediately to the operating room. Explorative laparotomy was carried out. More than 4000 mL blood was lost in the abdominal cavity, active bleeding from the caudate lobe was identified. A hepatic artery pseudoaneurysm measuring 15 mm maximum in diameter was observed in the hematoma using intra-operative ultrasound (Figure 2). The bleeding site was first sutured and then packed with ribbon gauze for hemostasis, vital signs returned to normal and the patient was moved to intensive care. Eleven hours later, fresh blood appeared in the abdominal tube, the drainage was more than 100 mL/h, heart rate increased subsequently, the patient was moved to the angiographic suite. 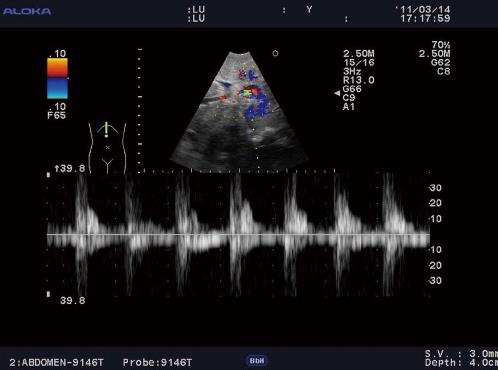 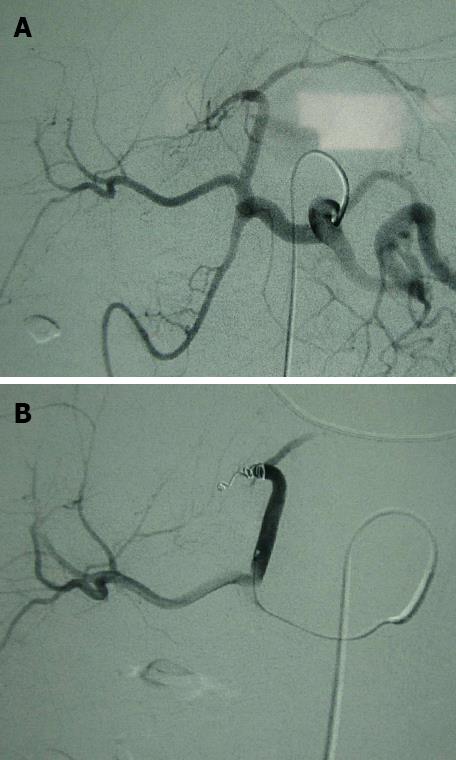 Figure 4 Computed tomography scan acquired 1 mo later. The image revealed that the pseudoaneurysm had disappeared. No tumor enhancement was apparent at the ablated site. The coils used for embolization were visualized.
DISCUSSION

Liver RF ablation is an effective minimally invasive therapy used to treat primary and secondary hepatic carcinoma[4-6]. In this case, the enhanced imaging of tumors in CT scan was not obvious, suggesting a poor arterial supply. Therefore, we chose RF ablation as the primary treatment rather than transarterial chemo-embolisation. However, the results described in this case report emphasize that hepatic artery rupture may occur after liver RF ablation especially lesions located in caudate lobe and near the hepatic porta.

An intra-operative ultrasound study and hepatic angiography were useful in detecting the hepatic artery pseudoaneurysm[11,12]. Hepatic angiography is considered the gold standard for diagnosis of hepatic artery injury[13]. We performed emergency hepatic arterial embolization using coils. Hepatic arterial embolization is now the first choice treatment for hemorrhagic pseudoaneurysms because it entails less morbidity and mortality than occur after surgical intervention[14,15]. Experience of hepatic vein pseudoaneurysm caused by RF ablation and managed with stent-graft placement was reported recently[16]. Embolization is reportedly successful in 75% of cases, with a bleeding rate of about 20%.

Laparotomy is an important procedure to control massive bleeding in such an emergent situation. Otherwise there is no opportunity to carry out coil embolization. Due to the severe adhesion of hepatic porta, it is very difficult to dissect the left hepatic artery. Packing with ribbon gauze for hemostasis is a valuable and safe choice but has only a temporary effect. Coil embolization was identified to be the critical treatment for bleeding caused by hepatic pseudoaneurysm. So packing with ribbon gauze and embolizing the hepatic pseudoaneurysm sequentially through angiography is proven to be the ideal strategy of treating such potentially fatal bleeding.