The periodontal ligament (PDL) is an essential fibrous tissue for tooth retention in the alveolar bone socket. PDL tissue further functions to cushion occlusal force, maintain alveolar bone height, allow orthodontic tooth movement, and connect tooth roots with bone. Severe periodontitis, deep caries, and trauma cause irreversible damage to this tissue, eventually leading to tooth loss through the destruction of tooth retention. Many patients suffer from these diseases worldwide, and its prevalence increases with age. To address this issue, regenerative medicine for damaged PDL tissue as well as the surrounding tissues has been extensively investigated regarding the potential and effectiveness of stem cells, scaffolds, and cytokines as well as their combined applications. In particular, PDL stem cells (PDLSCs) have been well studied. In this review, I discuss comprehensive studies on PDLSCs performed in vivo and contemporary reports focusing on the acquisition of large numbers of PDLSCs for therapeutic applications because of the very small number of PDLSCs available in vivo.

Core tip: For patients with severe periodontitis, deep caries, and trauma, which can lead to tooth loss, the development of highly effective regenerative therapies for severely damaged periodontal tissue is an urgent concern. As one possible method to address this issue, cell-based therapy using periodontal ligament stem cells (PDLSCs) shows great promise. However, the number of PDLSCs present in vivo is too small for implementation of this method, and PDLSC isolation requires patients to undergo invasive surgery. In this review, ways to acquire large numbers of PDLSCs and advances in periodontal regenerative therapy during the past two decades are summarized. 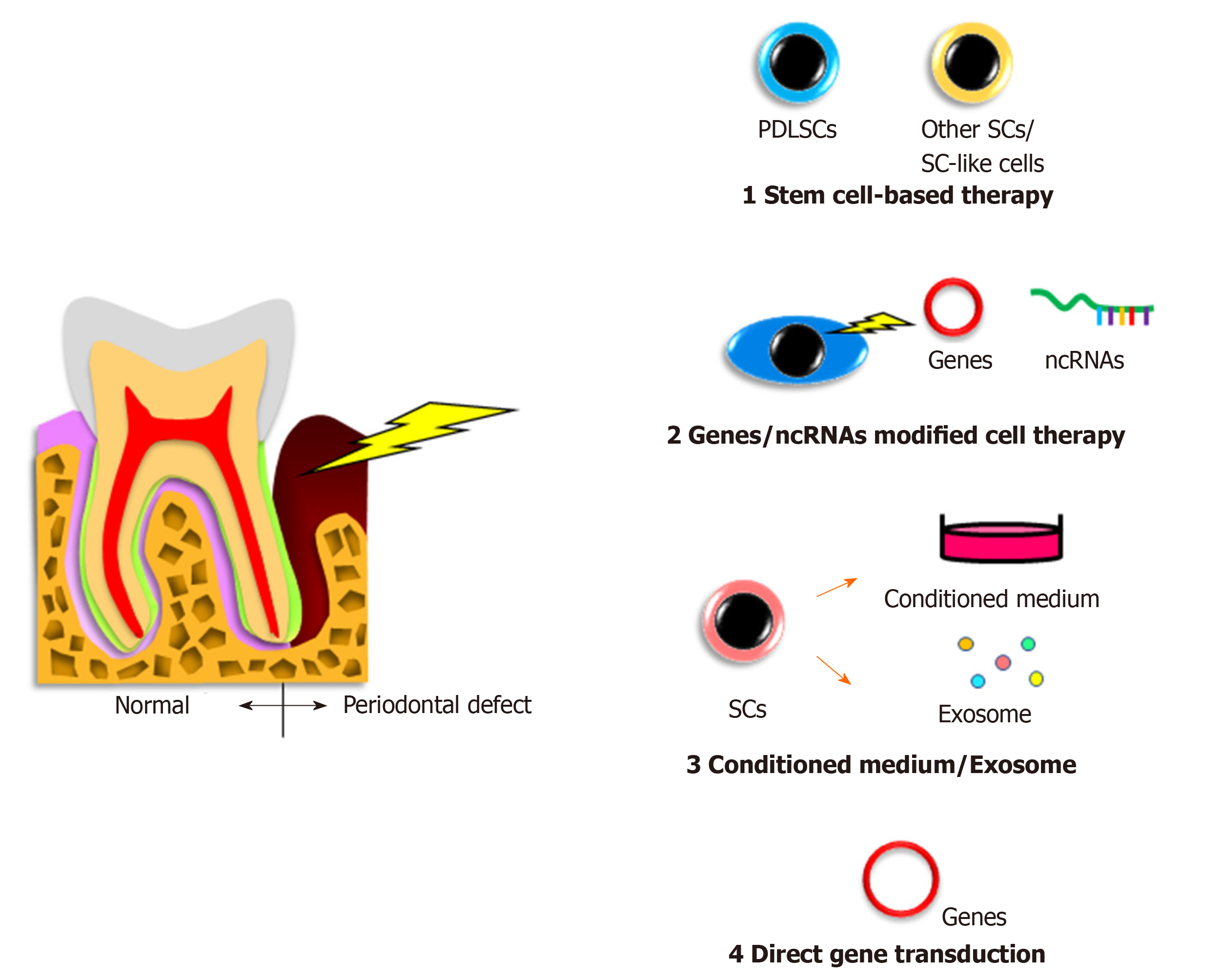 No clinical studies on gene or noncoding RNA modified cell therapy for the treatment of patients with periodontal disease have been reported because of the associated safety issues. However, there have been some reports involving animal models with experimentally produced periodontal defects. Osteoprotegerin gene-transferred rabbit PDLSCs and platelet-derived growth factor-BB-transduced human PDLSCs exhibited increased bone formation in periodontal defects[18,19].

Modification of PDLSCs using noncoding RNA, including microRNA, long noncoding RNA, and circular RNA have been reported to induce their osteogenic differentiation, suggesting the application of these cells to bone defective in periodontitis[24].

Although the above studies indicated the potential of novel therapies for repair of severe periodontal defects, further basic studies are indispensable for future clinical trials.

Conditioned medium from cultured cells and extracellular vesicles secreted from stem cells have various effects, including tissue regeneration, cell proliferation, chemotactic and metabolic activities, anti-inflammation, and cell-cell communication[25]. Because these cells and vesicles possess great potential, researchers have examined their roles in periodontal regeneration studies, but related clinical trials have not been reported.

Although the above effects do not reflect direct contributions of stem cells to treatment, these indirect effects of stem cells may deserve further consideration as treatment options.

The gene therapy method has not been investigated in human patients, and its effectiveness needs to be fully verified before it can be used as a relatively easy therapeutic modality.

PDLSCs are somatic stem cells localized in PDL tissue[36] and derived from cranial neural crest cells[37,38]. PDLSCs have similar features to BMMSCs and exhibit self-renewal capacity and multipotency[39]. These cells have the potential to undergo triploblastic differentiation with the ability to differentiate into not only osteoblasts, adipocytes, chondrocytes, cementoblasts, and tendon/ligament fibroblasts[40,41] but also myocytes[42], neural cells[43], retinal cells[44], endothelial cells[45], pancreatic islet cells[46], and hepatic cells[47]. In addition, PDLSCs express cell surface markers such as STRO-1, CD146/MUC18[36], CD44, and CD90 (markers associated with stromal cells), CD105 and CD166 (markers associated with stromal cells and endothelial cells)[48], and CD10, CD26, CD29, CD73, and CD349/FZD9[49] but do not express hematopoietic cell surface markers such as CD31 and CD45, similar to BMMSCs[50].

Finally, PDLSCs possess immunomodulatory properties[48], among which reactive oxygen species production may be interestingly regulated by dual mechanisms depending on the degree of inflammation[53].

Severe periodontitis, deep caries, and trauma cause irreversible damage to PDL tissue as well as the surrounding tissues such as alveolar bone, gingiva, and cementum, eventually resulting in tooth loss. The 8020 Promotion Foundation survey for causes of tooth loss in Japan (https://http://www.8020zaidan.or.jp/english/) performed in 2018 reported that periodontitis, caries, and tooth fracture accounted for 84.0% of all causes of tooth loss. The Global Burden of Disease 2015 study suggested that 7.4% of people worldwide suffered from severe periodontitis[54]. Meanwhile, the National Survey of Dental Diseases in Japan performed in 2016 (https://www.mhlw.go.jp/toukei/http://list/62-28.html) reported that Japanese people with periodontal health (< 4 mm periodontal pocket depth) comprised less than 37.0% of people aged ≥ 50 years.

To date, transplantation of PDLSCs has led to successful periodontal regeneration in experimentally produced periodontal defects in dogs[55,56], rats[57], and pigs[58]. Furthermore, Yan et al[59] performed a systematic review and meta-analysis and decisively stated that cell-based therapy is an effective therapy for regeneration of lost periodontal tissue.

Interestingly, the fate of transplanted PDLSCs was examined in a rat periodontal defect model[62]. The findings revealed that PDLSCs contributed to periodontal repair but did not become markedly engrafted, suggesting a supportive role of PDLSCs for activating the regenerative capability in the damaged periodontium. Considering the critical role of PDLSCs in periodontal regenerative therapy, PDLSCs themselves may be difficult to engraft into defect sites, but the use of 2D or 3D construction methods combined with extracellular matrices may be effective.

WHY ARE LARGE AMOUNTS OF PDLSCs NEEDED?

While the defect volumes in cases reported in human clinical studies have been very limited as described above, the defect areas in severe cases leading to tooth loss can vary across a wide range. Therefore, clinical application of PDLSCs to regenerative therapy of periodontal defects in humans will require the acquisition of large numbers of PDLSCs. Meanwhile, delivery of autologous PDLSCs to patients will necessitate the patients to undergo surgically invasive procedures. In addition, the subsequent expansion of small numbers of PDLSCs in vitro could lead to loss of their stemness. In this regard, it is of concern that large amounts of PDLSCs are needed for regenerative treatment. To address this issue, methods to acquire large numbers of PDLSCs have been explored.

HOW TO SOLVE THE INSUFFICIENCY OF PDLSCs?
Reprogrammed cells (Figure 2) 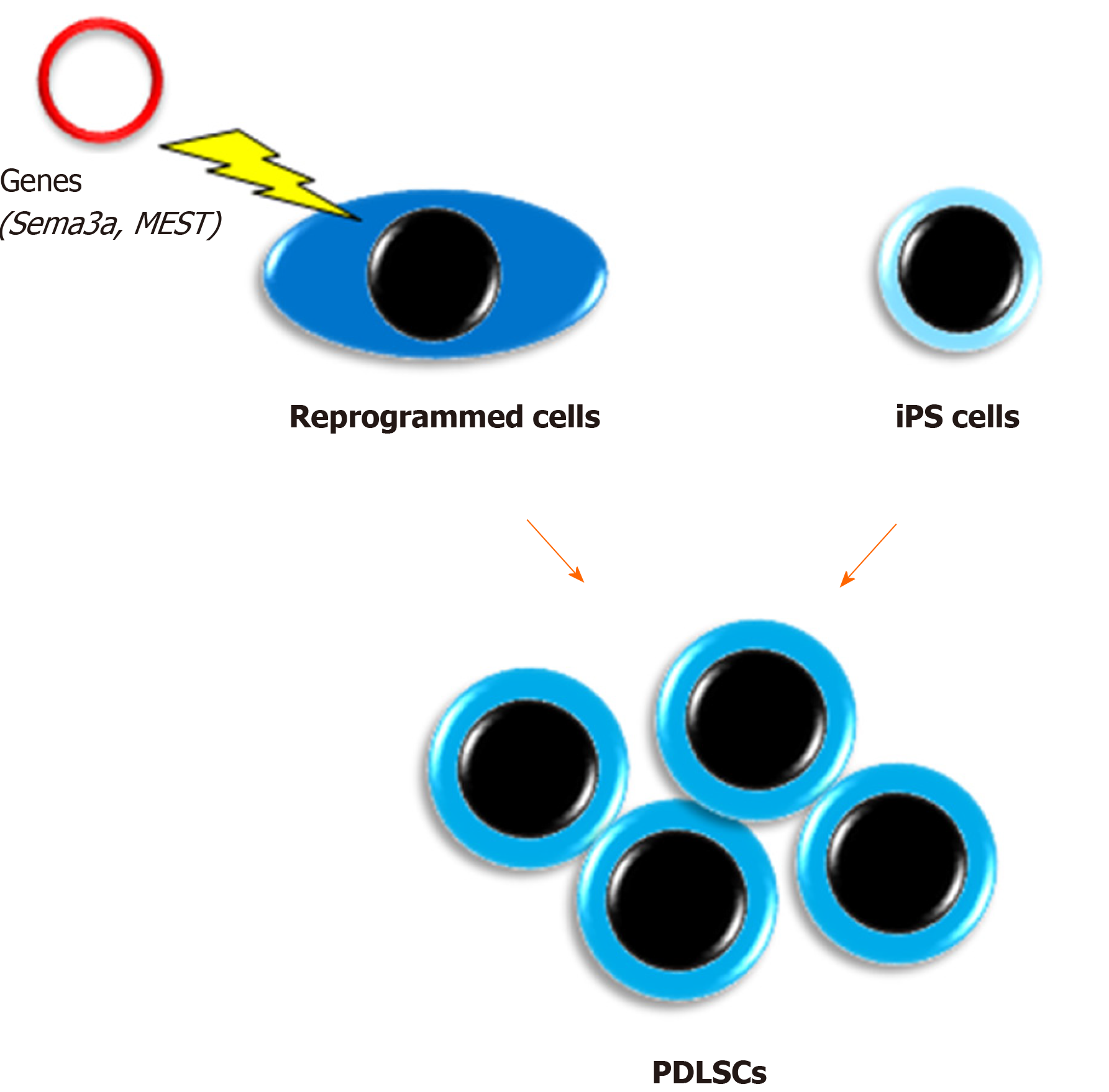 We have reported unique methods for conversion of PDL cells to PDLSCs by gene transduction[65,66]. In a previous study, semaphorin 3A-transduced human PDL cells were converted into stem-like cells that showed multipotency and expressed both embryonic stem cell and MSC markers[65]. Furthermore, we recently demonstrated that an unexplored gene, mesoderm-specific transcript, was expressed in PDLSCs and that human PDL cells transduced with the mesoderm-specific transcript gene acquired PDLSC properties similar to semaphorin 3A-transduced cells[66]. In addition, the transduction changed the spindle shape of PDL cells to a stem cell-like round shape. Therefore, although the safety of these cells in vivo needs to be confirmed for clinical use, cell transformation with these genes is a potential method for mass acquisition of PDLSCs.

Our group was the first to report the development of PDLSC-like cells from human skin fibroblast-derived iPS cells[67]. Our study indicated that iPS cells themselves were unable to directly differentiate into PDLSCs, whereas neural crest-like cells developed from iPS cells attained PDLSC properties when cultured on extracellular matrix secreted from human primary PDL cells. We believe that this method may have great potential to solve the issue of insufficient numbers of PDLSCs. In addition, a recent study produced human leukocyte antigen homozygous iPS cells by gene modification, which have immune compatibility[68]. This development will enable the clinical use of iPS cell-derived PDLSCs benefiting many patients with severe periodontal defects. However, the issue of cost needs to be solved.

Many researchers have attempted to develop innovative and critical methods for periodontal therapy from various angles to support people’s health and life and address the aging society. PDLSC-based therapy is one of these methods, and we believe that it has the potential to deliver sustainable oral health to people around the world.

The author thanks Drs. Tomokiyo, Hamano, Hasegawa, Sugii, Yoshida, and Itoyama for their great support in the preparation of this review.