METHODS: Total RNA was isolated from human colorectal carcinoma cell line LoVo treated with HGF/SF (80 ng/L) for 48 h. Fluorescent probes were prepared from RNA labeled with cy3-dUTP for the control groups and with cy5-dUTP for the HGF/SF-treated groups through reverse-transcription. The probes were mixed and hybridized on the microarray at 60 °C for 15-20 h, then the microarray was scanned by laser scanner (GenePix 4000B). The intensity of each spot and ratios of Cy5/Cy3 were analyzed and finally the differentially expressed genes were selected by GenePix Pro 3.0 software. 6 differential expression genes (3 up-regulated genes and 3 down-regulated genes) were selected randomly and analyzed by β-actin semi-quantitative RT-PCR.

HGF/SF-met signaling is a pathway by stimulation of c-met via its ligand hepatocyte growth factor /scatter factor (HGF/SF), leading to a considerable variety of biological and biochemical effects on the cells[1-3]. HGF/SF, a multifunctional cell growth factor, is yielded by interstitial cells such as fibroblast, neuroglial cell, glial cell, fat-storing cell and macrophage[3,4]. It binds to the c-met receptor specifically, inducing a series of conformational changes of signaling proteins by activating JAK[5], phosphatidylinositol 3-kinase (PI-3 K)[6], phospholipase C-γ[7], Raf-1 kinase[8] etc, by which it transmits the signal to the nuclear transcription machines to control certain gene transcription and expressions. Finally it affects the cell proliferation, differentiation, locomotion and other cell functions[9-12]. HGF/SF has been proved to have mitogen, motogen, morphogen activity for almost all epithelial cells, and to promote adhesiveness, invasiveness, motion and metastasis and stimulation for blood vessel growth of cancer cells[8-13]. It was revealed to have anti-cytotoxin and anti-apoptosis for cancer cells in the recent investigation[11,12]. It is evidenced that abnormal activation of HGF/SF-met signaling plays an important or critical causal role in tumor progression and invasion and metastasis. However, little is known about the target genes and gene expression profiles by which HGF/SF exerts biological functions through start-up of transcriptional gene expression.

In the present study, we aimed to explore the transcriptional gene expression profiles by activating HGF/SF-met signaling in colorectal carcinoma cells using the microarray technology by which thousands of genes could be detected at the same time.

Human colorectal carcinoma cell line LoVo was routinely cultured in RPMI-1640 medium with 10% FCS, incubated at 37 °C with 5% CO2. The well-grown cells at the logarithmic growth phase were treated with HGF/SF (80 ng/L) for 24-48 h in the same medium containing 2.5% FCS. The blank control groups were treated with D-Hanks solution in the same culture condition as HGF/SF-treated groups. Triduplication of the experiments was for the microarray assay.

The genes for HGEC-40S microarray containing 4096 cDNA spots (including 92 negative and positive control spots) were provided by Shanghai Biostar Co. These genes were amplified by PCR with universal primers and then purified by the routine method[13-15]. The purity of PCR products was supervised by agarose electrophoresis and then the PCR products were dissolved in 3 X SSC solution. The target genes were spotted on siliconlated slides (TeleChem Inc) by using Cartesian 7500 spotting robotics (Cartesian Inc), then hydrated for 2 h, dried for 0.5 h, UV cross-linked by UVP CL-1000 at 65 mJ/cm, and then treated with 0.2% SDS(10min), H2O (10 min) and 0.2% NaBH4 (10 min). Finally the slides were dried again and ready for use.

Total RNA was isolated from human colorectal carcinoma cell line LoVo by the routine method[13-15]. And then they were tested by hot-stabilization experiments and RNA electrophoresis. cDNA probes were prepared through reverse transcription in 50 μl reaction system in reference to Schena et al[15]. The fluorescent probes derived from cDNA reverse-transcripted from RNA were labeled with cy3-dUTP for the control groups and with cy5-dUTP for the HGF/SF-treated groups. The two kinds of probes were mixed equally after ethanol precipitation, then inspissated by vacuum to 50 μl, purified by using S-200 columns, and finally dissolved in hybridizing solution (20 μl 5×SSC+0.2% SDS).

GenePix 4000B laser scanner (Axon) was used to scan microarray, with laser power 3.72 and photomultiplier tube volts 750. GenePix Pro 3.0 software was used for analysis of intensity of each spot and ratio of Cy5/Cy3 from the acquired images. The intensities of Cy3 and Cy5 were normalized by a coefficient according to the ratio of the located 40 housekeeping genes. The standards for differentially expressed genes were as follows: the ratio of Cy5/Cy3 was more than 4 or less than 0.25, and the intensity value of Cy3 and Cy5 was more than 200.

The values of D260/D280 for control and HGF/SF-treated groups were 2.022, 2.103 respectively. After hot stabilization test the 18S and 28S bands of total RNA extracts were as clear as before the test (Figure 1). 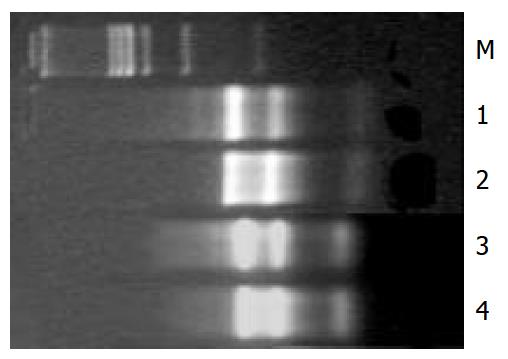 The fluorescent intensities of built-in negative control including rice U2 RNA gene, HCV coat protein gene, spotting solution (without DNA) as blank spots were lower than 200, while the intensities of built-in 40 house-keeping genes as positive control spots were larger than 5000. Normalization coefficient was 1.028. The odds of spot average intensities with background for HGF/SF-treated groups and the control groups were 10.254, 12.856 respectively. The ratio of Cy5/Cy3 by self-check test was 0-1.7, with the average 1.0112. 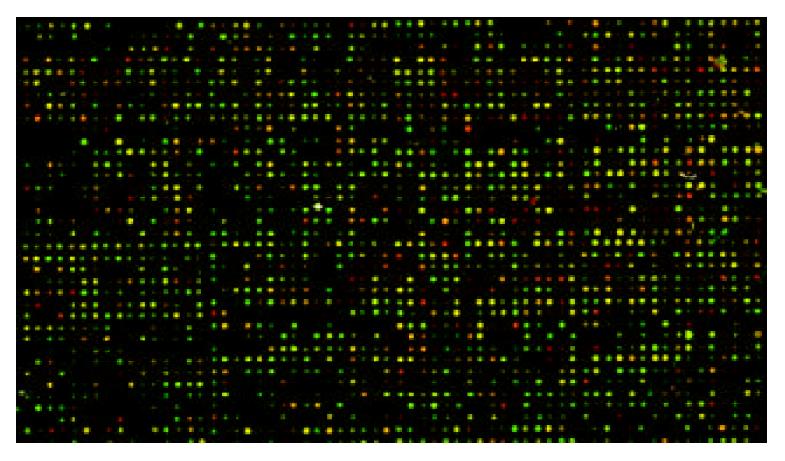 To validate the reliability of microarray results, 6 differential expression genes (3 up-regulated genes and 3 down-regulated genes) were selected randomly and analyzed by β-actin semi-quantitative RT-PCR. Expressions of the 6 differential genes by RT-PCR were confirmed to be consistent with the results of microarray (shown in Figure 3 and Figure 4). The average relative densities of bands detected by Bandlead 3.0 computer program showed significant differences (P < 0.05) between HGF/SF-treated groups and control groups except SHPG, heregulin, and DAP-1 groups. 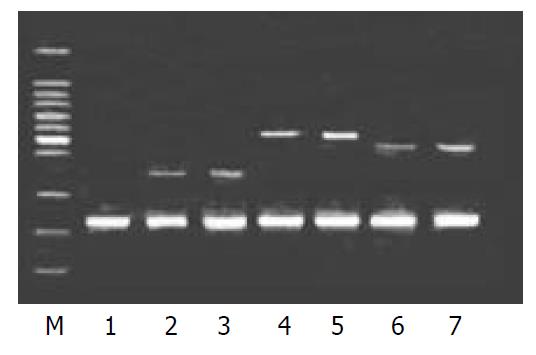 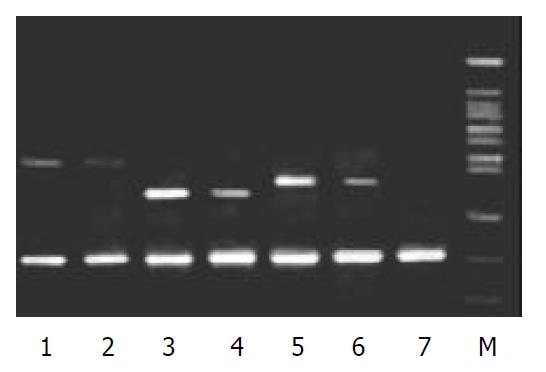 Gene chip, or DNA chip, including oligonucleotide chip synthesized in situ and cDNA microarray by direct-spot or cDNA array[22-24], is a key technique platform[25-27] in post-genome times for its striking superiority of high-throughput, high-parallelity, high-sensitivity, micromation and automatization. cDNA microarray is a mature and widespread technique. Its stability, reliability and reproducibility have been confirmed by many investigators[28-31]. The microarray experiment in this research was successful and under strict quality control, with mRNA in good quality and no degradation tested by the test of hot-stabilization. In our experiment the built-in positive and negative control showed the qualified results, the scanning images showed lower noise background, and the positive spots indicated high intensity of signal with clear circle appearance. All the parameters such as odds of spot average intensity with background for the HGF/SF-treated group and for the control, normalization coefficient, and ratio of Cy5/Cy3 by self-check test were in accord with theoretic values of successful experiment. The expressions of the 6 differential expression genes randomly selected by RT-PCR were confirmed to be consistent with the results of microarray. These results indicate satisfactory reliability of the microarray experiment.

It has been evidenced that HGF/SF-met signaling plays an important, even a critical role in tumor progression, invasion and metastasis. Hamasuna et al[32] showed that HGF/SF activated membrane type metalloproteinases (MT1-MMP) in dosage-related manner and decreased wild-type metalloproteinases inhibitor TIMP-2 mRNA. They indicated that glioblastoma cells U251 excreted more MMP-2 protein and MMP-2 mRNA expression increased by 2.5 fold by HGF/SF stimulation. Abouader et al[33] argued that HGF/SF-met signaling was a key molecule path for control of glioblastoma cells growth, progression, invasion and metastasis. Recently Webb et al[34] have confirmed that HGF/SF-met-uPA -plasmin pathway exists in some tumor cell lines and is related to invasion, metastasis and other malignant behaviors. Only a few genes can be investigated by the traditional technology of molecular biology and the whole transcriptional gene expression profiles of HGF/ SF-met signaling pathway can hardly be explored. In this paper the transcriptional gene expression profiles of HGF/SF-met signaling pathway in colorectal carcinoma cells were discussed for the first time so as to explore the target genes related to the signaling pathway. The results indicated that HGF/SF-met signaling might activate oncogenes, signal transduction genes, apoptosis-related genes, metastasis related genes and many other genes with up-regulation effects, and meanwhile it might down-regulate a number of genes. It is suggested that a complex signaling-adjusting-gene-expression network may be in existence, and contribute to extensive gene transcription effects and comprehensive biological roles. The complexity of HGF/ SF-met signaling to control the gene expression was revealed as a whole by the gene chip technology, by which it manifested incomparable superiority.

The transcriptional gene expression profiles induced by HGF/SF-met signaling pathway in the colorectal carcinoma cells were described by cDNA microarray technology, and meanwhile the complexity and pluripotency of regulation in gene expression were also revealed for the first time. A majority of the genes with differential expression can be explained by the existing scientific theories, although some of them have unknown-function and a few of them cannot be explained reasonably for the time being, which deserve further investigation.