AIM: To investigate the apoptosis in esophageal cancer cells induced by resveratrol, and the relation between this apoptosis and expression of Bcl-2 and Bax.

METHODS: In in vitro experiments, MTT assay was used to determine the cell growth inhibitory rate. Transmission electron microscope and TUNEL staining method were used to quantitatively and qualitively detect the apoptosis status of esophageal cancer cell line EC-9706 before and after the resveratrol treatment. Immunohistochemical staining was used to detect the expression of apoptosis-regulated gene Bcl-2 and Bax.

The Bcl-2 family plays a crucial role in the control of apoptosis. The family includes a number of proteins which have homologous amino acid sequence, including anti-apoptotic members such as Bcl-2 and Bcl-xL, as well as pro-apoptotic members including Bax and Bad. In in vitro experiments, overexpression of Bcl-2 has been shown to inhibit apoptosis, but overexpression of Bax has been shown to promote apoptosis.

Resveratrol, a phytoalexin found in grapes, fruits, and root extracts of the weed Polygonum cuspidatum, is an important constituent of Chinese folk medicine. Indirect evidence suggests that the presence of resveratrol in white and rose wine may be helpful to reduce risks of coronary heart disease which would be achieved by moderate wine consumption. This effect has been attributed to the inhibition of platelet aggregation and coagulation, in addition to the antioxidant and anti-inflammatory activity of resveratrol. Moreover, a recent report shows that resveratrol is a potent cancer chemopreventive agent in three major stages of carcinogenesis. The anti-tumor activity of resveratrol might be related to induce the apoptosis of tumor cells but the precise mechanism of antitumor activity is not well understood.

Resveratrol and MTT were obtained from Sigma Chemical Co. Ltd. In situ cell detection kit, anti-Bcl-2 monoclonal antibody and anti-Bax monoclonal antibody were purchased from Beijing Zhongshan biotechnology Co. Ltd. Stock solution of resveratrol was made in dimethylsulfoxide (DMSO) at a concentration of 100 mmol·L-1. Working dilutions were directly made in the cell culture medium. Human esophageal carcinoma cell line EC-9706 was obtained from Professor Ming-Rong Wang in Chinese Scientific Academy.

Transmission electron microscopy Cells treated with 10 mmol·L-1 resveratrol were harvested after incubation for 24 hs. Subsequently the cells were fixed in 4% glutaral and immersed with Epon 821, imbedded for 72 hs at 60 °C, the cells were prepared into ultrathin section (60 nm) and stained with uranyl acetate and lead citrate. Cell morphology was observed by transmission electron microscopy.

TUNEL assay Apoptosis of EC-9706 cells was evaluated by using an in situ cell detection kit. The cells were treated in the presence or absence of 10 mmol·L-1 resveratrol for 24 to 96 hs and fixed in ice-colded 80% ethanol for up to 24 hs, treated with proteinase K and then 0.3% H2O2, labeled with fluorescein dUTP in a humid box for 1 h at 37 °C. The cells were then combined with POD-Horseradish peroxidase, colorized with DAB and counterstained with methyl green. Controls were received the same management except the labeling of omission of fluorescein dUTP. Cells were visualized with light microscope. The apoptotic index (AI) was calculated as follows: AI = (Number of apoptotic cells/Total number) × 100%.

Immunohistochemical staining Immunohistochemical staining was done by an avidinbiotin technique. EC-9706 cells treated in the presence or absence of 10 mmol·L-1 resveratrol for 24 to 96 hs were grew six-well glass slides and were fixed by acetone. After washing in PBS, the cells were incubated in 0.3% H2O2 solution at room temperature for 5 min. The cells were then incubated with anti-Bcl-2 or anti-Bax monoclonal antibody at a 1:300 dilution at 4 °C overnight. After washing in PBS, the second antibody, biotinylated antirat IgG, was added and the cells were incubated at room temperature for 1 h. After washing in PBS, ABC compound was added and then incubated at room temperature for 10 min. DAB was used as the chromagen. After 10 min, the brown color signifying the presence of antigen bound to antibodies was detected by light microscopy and photographed at × 200. Controls were managed the same as the experimental group except the incubation of the primary antibody. The positive rate (PR) was calculated as follows: PR = (Number of positive cells/Total number) × 100 %.

Datas were analyzed by the paired two-tailed Student t test, and significance was considered when P < 0.05.

EC-9706 cells were exposed to increasing concentrations (0.1 mmol·L-1 to 100 mmol·L-1) of resveratrol for 24 to 96 hs, respectively. EC-9706 cells showed the mortality in a dose- and time-dependent manner. The data were summarised in Table 1.

After treatment of EC-9706 cells with resveratrol (10 mmol·L-1) for 24 hs, some cells appeared apoptotic characteristics including chromatin condensation, appearance of chromatin crescent, nucleus fragmentation and of formation apoptotic body which could be seen by transmission electron microscope.

Apoptotic cell death was determined by TUNEL assay according to the manufacture’s instructions. Positive staining located in the nucleus (Figure 1). After treatment with resveratrol (10 mmol·L-1)for 24 to 96 hs, AIs were apparently increased with treated time (P < 0.05) (Table 2). 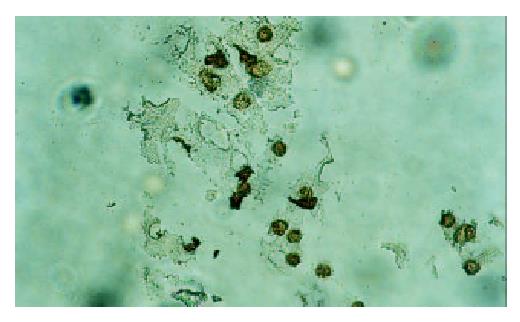 Positive staining located in the cytoplasm (Figure 2). After treatment with resveratrol (10 mmol·L-1)for 24 to 96 hs, PRs of Bcl-2 proteins were apparently reduced with treated time (P < 0.05) (Table 3). This suggested that resveratrol could down-regulate the expression of Bcl-2. 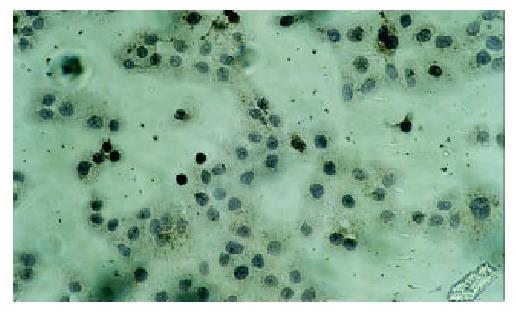 Figure 2 Immunohistochemical staining of the expression of Bcl-2 ( × 200).
Expression of bax proteins

Positive staining located in the cytoplasm (Figure 3). After treatment with resveratrol (10 mmol·L-1)for 24 to 96 hs, PRs of Bax proteins were apparently increased with treated time (P < 0.05) (Table 4). This suggested that resveratrol could up-regulate the expression of Bax. 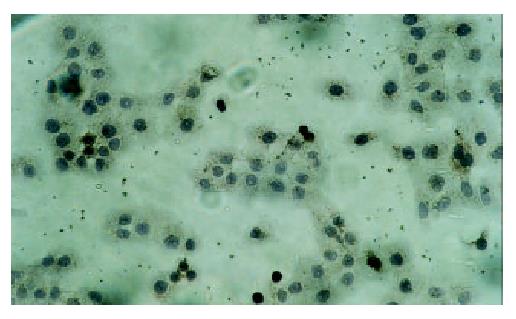 Figure 3 Immunohistochemical staining of the expression of Bax ( × 200).
DISCUSSION

Currently, only few chemotherapeutic drugs take effect in the treatment of human primary esophageal carcinoma and it clearly need to look for new anti-esophageal carcinoma drugs. Resveratrol, a polyphenol found in various fruits and vegetables and is rich in grapes. The root extracts of the weed Polygonum cuspidatum, an important constituent of Chinese folk medicine, is also an ample source of resveratrol[1,2]. Several studys in last several years have shown that resveratrol have cardioprective and chemopreventive effects[3-5]. This constituent may account for the reduced risk of coronary heart disease in humans which may be achieved by moderate wine consumption[6]. Resveratrol is able to inhibit the growth of a wide variety of tumor cells, including leukemic, prostate, breast and hepatic cells[7-11]. The anti-tumor activity of resveratrol might be related to the induction of tumor apoptosis of tumor cells[12-22].

The Bcl-2 family plays a crucial role in the control of apoptosis. The family includes a number of proteins which have homologous amino acid sequences, including anti-apoptotic members such as Bcl-2 and Bcl-xL, as well as pro-apoptotic members including Bax and Bad[23-26]. Overpression of Bax has the effect of promoting the cell death[27-31]. Conversely, Overpression of antiapoptotic proteins such as Bcl-2 will repress the function of Bax[32-36]. Thus, the ratio of Bcl-2 / Bax appears to be a critical determinant of a cell’s threshold for undergoing apoptosis[37].