AIM: To observe the localization of TRAIL/TRAIR (DR4, DR5, DcR1, DcR2) in the fetal pancreas.

METHODS: Fetal pancreas of 32 wk of pregnancy were obtained from induced abortions, embedded in paraffin, and 4-μm sections were prepared. The localization of TRAIL/TRAILR in fetal pancreas was investigated by fluorescence immunohistochemical method combined with laser scanning confocal microscopy.

Tumor necrosis factor related apoptosis inducing ligand (TRAIL)/TRAILR is a group of molecules belong to TNFSF/TNFRSF identified from 1995 and displays very important biological function[14-20]. Despite the widespread interest in TRAIL and its receptors to date, studies on TRAIL/TRAILR are mostly stayed on mRNA level just for the lack of monoclonal antibodies. Fortunately, a series of antibodies against TRAIL/TRAILR system have been prepared and identified successfully by our department and Screaton group recently and these provided a useful way to detect the expression of TRAIL/TRAILR in many organs and tissues[21]. In this experiment, we detected the localization of TRAIL/TRAILR in fetal pancreas.

Five fetal pancreas of 32-week pregnancy were surgically obtained. They were washed with physiological saline at 4 °C and a 6-mm3 piece was taken from each before fixed in Bouin's solution overnight. Each piece was embedded in paraffin and 4-μm sections were prepared.

Four-micrometer sections from fetal pancreas of 32-week pregnancy were employed in the fluorescent immunohistochemical analysis of TRAIL/TRAILR. Several dilutions of the antibody were tested to find the optimal staining concentration before the entire series was processed. The staining procedure was carried out as previous reports, without protease treatment[22]. Briefly, the steps included: (1) the sections were deparaffinized in xylene, hydrated in ethanol, and washed in 0.01 mol/L PBS, then pretreated with 30 mL/L normal goat serum for 40 min and rinsed in 0.1 mol/L PBS; (2) incubation at 4 °C for 24 h in the primary antibodies, mouse anti-human DR4, DR5, DcR1 and DcR2 antibody (1:200 dilution, final concentration of 25 mg/L) was performed respectively, and then in rabbit anti-human TRAIL antibody (1:300 dilution in 10 mL/L BSA-PBS); (3) the secondary antibody, biotin-labeled horse anti-rabbit IgG (1:200 dilution), was incubated at room temperature for 1 h; (4) simultaneous incubation with 1:200 FITC conjugated goat anti-mouse IgG and Texas red-conjugated streptavidin (1:1000 dilution) for 30 min. The sections were washed three times for 10 min each after incubation from steps 2 to 4, respectively, and were finally mounted in 50 g/L glycerin. The sections were examined with Bio-Rad 1024 LSCM. The specimens were excited with a laser beam at wavelengths of 568 nm (Texas Red) and 488 nm (FITC) and the emission light was focused through a pinhole aperture. The full field of view was scanned in square image formats of 512x512 pixels.

Fluorescent immunohistochemistry showed that TRAIL positive cells located on the periphery of pancreatic islets mainly. In the acini and the ducts of the exocrine pancreas there were no TRAIL immunoreactive cells. The positive cells distributed in disperse or patch pattern. The positive reactivity was mainly distributed in membrane and cytoplasm, while nuclei remained immunonegative (Figure 1 (1,4,7 and 10)). 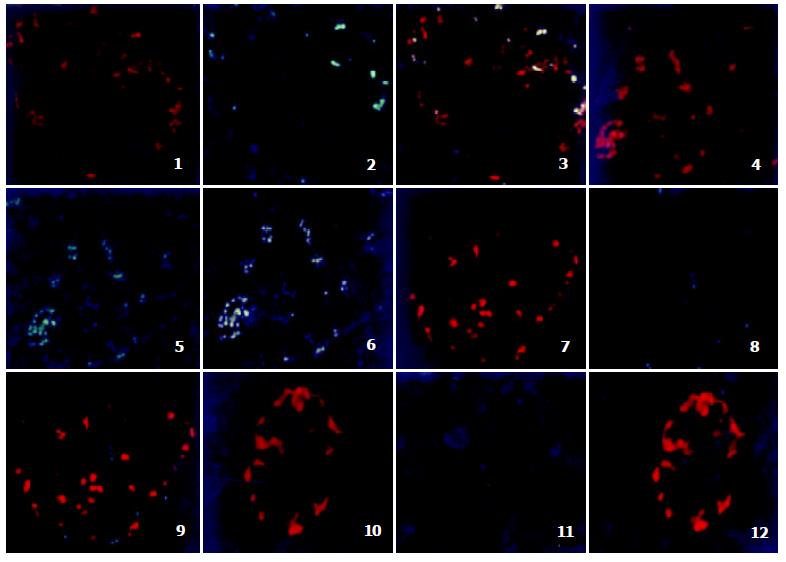 Coexpression of TRAIL and TRAILR in fetal pancreas

Members of the TNF and TNF superfamilies of proteins are involved in the regulation of many important biological processes, including development, organogenesis, and innate and adaptive immunity[23]. The TNF-related apoptosis-inducing ligand (TRAIL, also known as Apo-2L) is a newly identified TNF superfamily member with high homology to FasL. In the TRAIL/TRAILR system, control over apoptosis relies on differential display of receptors (TRAILR). These include DR4 (TRAIL-R1) and DR5 (TRICK2/TRAIL-R2), which transduce apoptotic signals, as well as DcR1 (TRID/LIT/TRAIL-R3) and DcR2 (TRUNDD/TRAIL-R4), which lack functional death domains and act as decoys. Osteoprotegerin (OPG), a soluble decoy receptor for OPGL/RANKL/TRANCE, which is involved in osteoclast function, has also been reported to bind to TRAIL[24-36].

There were some reports on the distribution of TRAIL/TRAILR in human pancreas and pancreatic cancer. Liao et al[37] found that TRAIL-R3 mRNA and protein expression were generally weak in pancreatic cancers and normal pancreatic tissues. In contrast, TRAIL-R4 mRNA and protein were expressed at moderate to high levels in human pancreatic cancer tissues, but demonstrated weak to negative expression in the normal pancreas by Northern blotting, Western blotting and immunohistochemistry. Satoh et al[38] detected the expression of TRAIL and its receptors other than osteoprotegerin in normal pancreatic tissues using RT-PCR. In our experiment, we found for the first time that in fetal pancreatic islets, there was strong distribution of TRAIL protein. The TRAIL immunoreactive substances mainly located on the membrane and cytoplasm with negative nuclei. Some TRAIL immunoreactive cells also showed DcR1 or DcR2 positive immunstaining, whereas there were no expression of DR4 and DR5 in fetal pancreas. Our results show some consistence with what Liao et al[37] and Satoh et al[38] have found.

It is well known that there are some kinds of cell types in human pancreatic islets such as A cells, B cells, D cells and PP cells. Although we found that TRAIL was located in some endocrine cells, we could not conclude which kind of cell types it existed in. This still needs to be clarified further.