METHODS: A total of 130 adult Sprague-Dawley rats were randomly divided into two groups: the rats in ANP group (n = 80) were induced by the retrograde intraductal infusion of 30 g·L-1 sodium taurocholate. And the rats in normal control group (n = 50) received laparotomy only. Sacrifices were made 6 h, 12 h, 24 h and 48 h later in ANP and normal control group after induction respectively. Intestinal mucosal permeability was studied by intrajejunal injection of 1.5mCi radioactive isotope 99mTc-diethlene triamine pentacetic acid (DTPA) and the radioactivity of 99mTc-DTPA content in urine was measured 6 h, 12 h, 24 h and 48 h after induction. Then the pancreas and intestine were prepared for pathology. Reverse transcription polymerase chain reaction (RT-PCR) was used to determine the mRNA expression of NK-1R and NK-2R, and Western blot was used to investigate the protein level of NK-1R and NK-2R.

RESULTS: In ANP rats, serious histologic damages in intestinal mucosa were observed, and the radioactivity of 99mTc-DTPA in urine increased significantly in the ANP group. RT-PCR revealed that NK-1R and NK-2R mRNA level was overexpressed in the distal ileum of ANP as compared with the normal control group. Western blot discovered stronger NK-1R (14-fold increase) and NK-2R (9-fold increase) immunoreactivity in the intestinal mucosa of ANP rats. Moreover, the overexpression of NK-1R was associated with mucosal pathological score (r = 0.77, P < 0.01) and intestinal permeability (r = 0.68, P < 0.01) in ANP rats.

Acute necrotizing pancreatitis (ANP) has a complicated and ill-defined pathophysiology. It is associated with a high complication rate and unpredictable outcom, with a mortality rate of 10%-45%[1]. The hypothesis that ANP promotes bacterial translocation, leading to infection in the inflamed pancreas and peripancreatic tissue, has been studied in rats fed with fluorescent beads, sensitive inert markers of translocation[2]. The results suggested a translocated bacteria route for pancreatic infection. Normal intestinal mucosal barrier can keep the bacteria from translocation, however, this barrier is damaged in ANP[3,4]. The mechanism, which leads to the dysfunction of mucosal barrier, remains unclear[5-9].

Recent studies have revealed the important role of Substance P (SP) and its receptors in ANP[10-13]. However, the expression of SP’s two receptors-neurokinin-1 receptor (NK-1R) and neurokinin-2 receptor (NK-2R) in intestinal mucosa of ANP, remains unclear. And their roles in mucosal damage has not been revealed.

Therefore, in the present study the mRNA of NK-1R and NK-2R in intestinal mucosa of ANP was analyzed using reverse transcription polymerase chain reaction (RT-PCR), the protein level of these two receptors was analyzed by Western blot. And the relationship between mRNA level and intestinal mucosal damage/intestinal permeability was also investigated.

Adult Sprague-Dawley rats weighing 250-300 g were obtained from the Laboratory Animal Center of Southeast University, and fed with standard rat chow. Animals were fasted overnight and anesthetized with 20 g·L-1 sodium pentobarbital (intraperitoneal injection). ANP models (n = 80) were induced by the retrograde intraductal infusion of 30 g·L-1 sodium taurocholate (0.1 ml·min-1·kg-1). And the rats in normal control group (n = 50) received laparotomy, the duodenum was taken out of the abdominal cavity and the pancreas was turned over for three times.

Sacrifices were made 6 h, 12 h, 24 h and 48 h later in ANP and normal control group after induction respectively. The distal ileum, pancreas and blood in portal vein were obtained for further studies. Freshly removed tissue samples were immediately fixed in paraformaldehyde solution for 12-24 hours and paraffin-embedded for routine histopathologic analysis. Concomitantly, tissue samples destined for RNA and protein extraction were immediately snap-frozen in liquid nitrogen and maintained at -80 °C until use. Blood was obtained for serum amylase determinations.

PCR amplification was carried out using either NK-1R or NK-2R or GAPDH in a final volume of 25 μl with a Perkin-Elmer GeneAmp System 9700 and 0.625 U of Taq DNA polymerase (Roche Diagnostics GmbH, Mannheim, Germany). Cycling conditions were as follows: 35 cycles of denaturation at 94 °C for 1 min, annealing at 62 °C for 1 min and elongation at 72 °C for 2.5 min. The first PCR cycle was preceded by denaturation at 94 °C for 3 min, and last PCR cycle was followed by incubation at 72 °C for 10 min.

For each PCR reaction, an identical tube containing the same amount of regent, and same amount of water was substituted for cDNA in these tubes. These tubes served as negative control of PCR.

RNA concentrations and PCR were titrated to establish standard curves to document linearity and to permit semiquantitative analysis of signal strength[20-22]. Amplified PCR products were separated by electrophoresis through a 1% agarose gel at 45 V for 120 min. The cDNA bands were visualized by ultraviolet illumination after the gels were stained with 0.5 g·L-1 ethidium bromide dissolved in Tris-borate-EDTA buffer (89 mM Tris, 89 mM boric acid, 2.5 mM EDTA, pH8.2). The gels were photographed, and the films were scanned and analyzed with a computerized densitometer (Image-Pro Plus, Version 3.0.01).

Western blot for NK-1R and NK-2R was performed as previously reported with certain modifications[18,19]. Briefly, 200 mg of tissue samples were powered in liquid nitrogen and then homogenized in lysis buffer (50 mM Tris-HCl, pH7.5, 150 mM NaCl, 2 mM EDTA, 1% SDS) supplemented with a protease inhibitor cocktail (Roche Diagnostics, Rotkreuz, Switzerland). The lysate was collected and centrifuged at 4 °C for 10 min with 14000 rpm to remove the insoluble material. The protein concentration was measured by spectrophotometry using the BCA protein assay (Pierce, Rockford, IL, USA). For each sample, 40 mg of protein was separated on 12% SDS-polyacrylamide gels and electroblotted onto nitrocellulose membranes.

Results were expressed as mean ± SD. Statistical analysis was made using the Prism software (Prism, GraphPad Software Inc., San Diego, CA, USA). The comparative statistical evaluations among groups were done using the Mann-Whitney U test or Chi-square test. Spearmann correlation analysis was used for correlation analysis of the parameters. Significance was defined as P < 0.05.

Serum amylase increased significantly in ANP group as compared with normal controls (P < 0.01). The diagnoses of ANP were confirmed by gross appearance and microscopy. In ANP group, mucosal edema, epithelia degeneration, necrosis or even abscission were observed after 6 h. Hemangiectasia, hemorrhage and inflammatory cell infiltration were revealed in mucosa or submucosa (Table 2).

The rats were sacrified 6 h, 12 h, 24 h or 48 h after model inducing, distal ileum was obtained for determination of NK-1R and NK-2R mRNA. Figure 1 shows the amplification plot at the time point of 6 h. The gene above had been amplified effectively, and amplification of GAPDH was comparable in each sample, which suggested comparable mRNA in each sample (Figure 1B, Figure 1D), whereas amplification of NK-1R in normal controls was so weak that some of the samples could only been observed in the gel. In contrast, the amplification of NK-1R in ANP group was relatively stronger (Figure 1A). The expression of NK-2R was similar to NK-1R (Figure 1C). After 12 h, 24 h or 48 h, the expression of above genes maintained the same pattern as before. 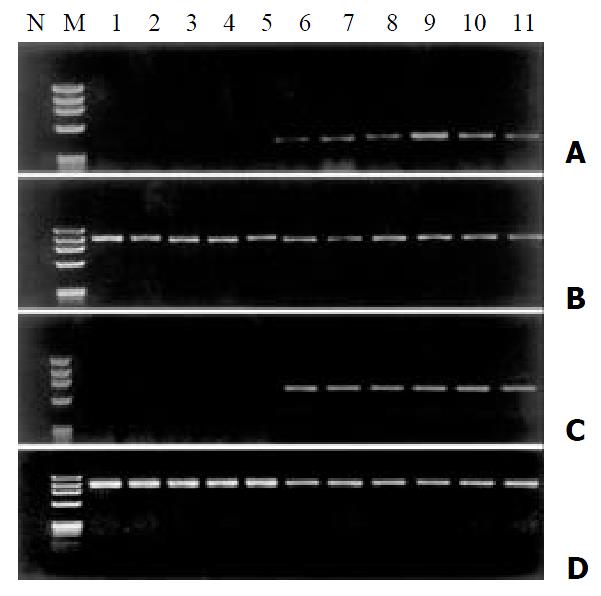 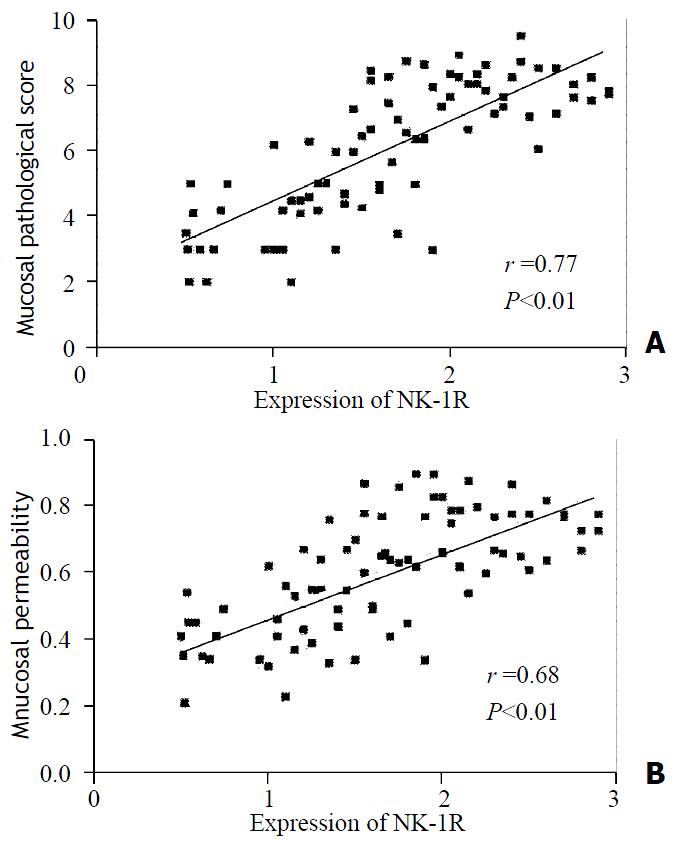 We then performed the Western blot analysis in controls and ANP group. All the normal controls exhibited approximately 46 kDa band of NK-1R protein of weak intensity. In contrast, the ANP samples showed a more intense signal (Figure 3A). The densitometric analysis demonstrated a 14-fold increase of NK-1R protein level in ANP ileum compared with the normal ileum (P < 0.01). 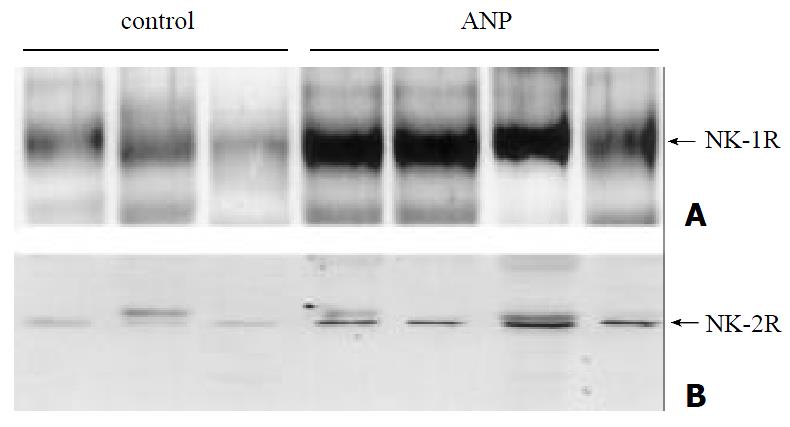 When Western blot analysis for NK-2R was performed, similar pattern was observed, protein signal was weak in normal control, but much stronger in ANP group (Figure 3B). Densitometry revealed a 9-fold increase of NK-2R in ANP ileum (P < 0.01).

Intestinal bacterial translocation is the main source leading to infection of pancreas, whereas this translocation is dependent, to some degree, on the function of intestinal mucosal barrier. Intestinal mucosal barrier is made up of mechanical, biological, immunologic and chemical barrier, while the mechanical barrier is the fundamental one, which can prevent large molecule and bacteria from passing through[23,24]. More and more evidence showed that gut barrier dysfunction is related to multiorgan system failure in sepsis and immune dysregulation[25-35]. Pancreatitis-induced hypovolaemia due to endothelial barrier leakage and gut arteriovenous shunting causes intestinal ischaemia and reperfusion injury with concomitant gut barrier dysfunction. Gut endothelial barrier dysfunction probably plays a central role. Potential molecular mechanisms could be associated with alterations in intracellular signal transduction, intercellular signal and expression of adhesion molecules on endothelial cells. Bacterial infections are often seen during the progression of ANP, concomitant with the potential development of multiple organ dysfunction[36,37]. The mechanisms underlying gut barrier dysfunction in acute pancreatitis are thus complex and still not fully elucidated.

SP is synthesized by small-diameter C sensory ‘pain’ fibers, and release of this peptide into the dorsal horn of the spinal cord following intense peripheral stimulation was thought to promote central hyperexcitability (central sensitization)[38,39]. In addition, it could result in plasma extravasation, neutrophil infiltration, and vasodilatation. In rats, both SP and NK-1R selective agonist stimulated pancreatic plasma extravasation, and this response was blocked by the NK-1R antagonist. Selective agonist of NK-2R showed no effect[12]. Continuous infusion of SP stimulated plama extravasation in rat pancreas via activation of NK-1R[40-42].

In the present study, expression of NK-1R and NK-2R mRNA was investigated by RT-PCR and the protein levels of NK-1R and NK-2R were determined using Western blot analysis in normal control and ANP intestines. The results revealed that both NK-1R and NK-2R were overexpressed in ANP intestines, and the overexpression of NK-1R was correlated with mucosal damage in ANP rats. Increased level of SP[43] in ANP, together with overexpression of its receptors-NK-1R and NK-2R, results in excessive biological effect, such as aggregation of neutrophilic granulocyte, cascade release of inflammatory transmitter, tissue fluid and plasma extravasation, thus resulting in deterioration of intestinal pathological changes and gut barrier dysfunction, and facilitating gut bacterial translocation.

Better understanding of the molecular biological changes in ANP will provide novel therapies to this disease. Once specific receptors were identified, selective atagonists which blocked these receptors would have therapeutic effects. Antagonists against NK-1R have showed some effects in acute pancreatitis on animal models[12,42]. Knowledge about the regulating events will probably make future pharmacological therapy available for prevention and treatment of the severe complications of ANP, including gut barrier dysfunction.