METHODS: 18 patients with HCC complicated with PVCT and esophageal or gastrio-fundal varices who underwent PTSVE were collected. The rate of success, complication, mortality of the procedure and postoperative complication were recorded and analyzed.

RESULTS: PTSVE were successfully performed in 16 of 18 cases, and the rate of success was 89%. After therapy erythrocyte counts decreased in all of the natunts. 5 of patients needed blood transfusion, 2 patients requiredsurgical intervention because of and 11 patients with ascites were alleviated by diuresis. Among these 18 patients, the procedure-related mortality was 11% (2/18), one died of acute hepatic failure on the forth day after procedure, another died of acute renal failure on the fifth day. The patients were follow up for 1~12 mo except one. 13 of them died of their tumors but none of them experienced variceal bleeding.

CONCLUSION: PTSVE is a relatively safe and effective method to treat esophageal or gastrio-fundal varices in HCC patients with PVCT when percutaneous transhepatic varices embolization (PTHVE) of varices is impossible.

Hepatocellular carcinoma (HCC) is common in china[1-8] and many complications occur[9-13] including ascites, portal hypertension and splenomegaly. Reviewed literatures, we found there are many articles about treatment of HCC[2,4,11,14-32] or varices[33-38], but few relering the treatment of HCC complicated varices[39-41]. The percutaneous transhepatic variceal embolization (PT HVE) of gastroesophageal varices is a highly promising procedure for controlling acute variceal hemorrhage and decreasing the mortality in patients with portal hypertension. However there are limitations of PTHVE application, because the natench of the main trunk of portal vein is reauired, which was limited its use. Thus, it is very important to find another route to catheterize into portal vein in patients whose portal vein were invaded by HCC. In order to control variceal hemorrhage in these patients it is very important to find another approach for catheterizing into their portal vein. From 1999-08 to 2001-01, 18 HCC patients with portal vein cancerous thro mbosis (PVCT) underwent percutaneous transsplenic embolization (PTSVE) of esophageal or gastrio-fundal varices in our institution as reported here.

18 patients (17 male, 1 female, mean age 48 year, aged from 29-72 year) of HCC with PVCT enrolled in to this study. The diagnosis of HCC with esophageal or gastrio-fundal varices was made by clinical history, alpha-fetoprotein (AFP), ultrasound, CT or MRI. 4 of the patients experienced variceal hemorrhage in different degree and 1 patient had seven episodes of serious variceal bleeding before therapy.

According to the Child-Pugh scores, 10 patients were Child A and 8 patients were Child B. Patients’ average platelet counts were 83.2 × 109, ranged from (11 to 195) × 109•L¯¹, and 3 patients had accepted 4 units blood transfusion due to decreased erythrocyte before therapy. The slight or moderate ascites were observed in 10 patients.

The patients with ascites were given albumin and diuretics. The patients have not underwent PTSVE until the ascites were alleviated. CT angiography (CTA) or MR angiography (MRA) of portal venous system was necessary to show patients’ splenic vein and its tributary[42], main trunk of portal vein and esophageal or gastrio-fundal varices in order to obtain the inlormations of the site, direction, and depth of puncture before therapy (Figure 1). 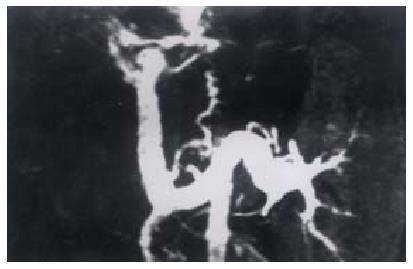 For clearly visualization of portal venous system and varices, indirect or direct portography was performed on Natient them.

The indirect portography was performed after 5F RH catheter was catheterized into patient’s splenic artery via left or right femoral artery approach. 40 mL contrast medium (Ultravist 300, Schering AG or Omnipaque 300, Nyegarrd）were injected into the splenic artery at a speed of 7 mL·s-1. The film were exposed 1 picture·s-1 for 10 s until the main stem of patients’ splenic vein and portal vein were clearly displayed. The tip of catheter was to be kept in the site for localization of the puncture.

The puncture site was determined on the basis of CTA or MRA images of portal veins. Usually the seventh to ninth intercostal space on the left midaxillary line was selected as the puncture site. Local anaesthesia was followed by percutaneous transsplenic puncture using a 21 G Chiba needle. The core of needle was removed and the needle was pulled back slowly with intermittent aspiration. When blood can be freely aspirated, 5 mL diluted contrast medium (1:3) was injected as test. If patient’s splenic vein was displayed clearly, a 0.018 (0.457 mm) guide wire was introduced and manipulated into the main stem of portal vein through the needle. Then the needle was withdrawn and replaced by a COPE puncture cannula system. A 5F catheter’s sheath was pushed into patient’s splenic vein through the exchanged 0.038 (0.968 mm) guide wire. After a 5F pigtail catheter was put in patient’s superior mesenteric vein (SMV), the direct portography was performed with 40 mL contrast medium injected into patient’s SMV at a ratio of 7 mL·s-1.

A 5F Cobra or SimmonsIcatheter was catheterized into patient’s varices. Absolute alcohol, gelfoam and steel coils were used as embolizational material. When the variceal vessels were occluded or the blood flow in varices was very slow, the varices were considered completely embolized. Then, the catheter was removed and the sheath was pulled back to the edge of the parenchyma of spleen. The duct of puncture was embolized by gelfoam and steel coil till the main stem of splenic vein was not displayed when the contrast medium was injected.

Routine post-operative management included hematischesis, hepatic function protection and anti-infection. Hepatic function and hematocyte were examined d2 and d5 after procedure. Abdominal symptom and body temperature were recorded too. B ultrasound, CT or MRI was followed in 9 patients 1 wk after operation. It was considered the proof of infection that high body temperature (> 38.5 °C) and high leucocytic counts (> 10 × 109•L¯¹), persisted longer than 7 d.

Survival time and post-operative bleeding rate were recorded in 15 patients in whom the follow up was done.

The branches of splenic vein have been successfully punctured in 16 of 18 patients and esophageal or gastrio-fundal varices were embolized in the patients except 1 one patient with slight varices. The success rate of PTSVE was 89% (16/18). The other 2 patients whose PTSVE was unsuccessful didn’t undertake the CTA or MRA examination before treatment.

Hepatofugal blood flow in portal vein was observed in 16 patients. The main stem of portal vein obstructed and collateral circulation occurred in 14 patient s. Grade 1 varices in 1 patient, Grade 2 in 4 patients, and grade 3 in 11 patients were observed (Figure 2, Figure 3, Figure 4). Among 3 patients whose varices fallen in grade 2, 2 patients had spontaneous splenorenal shunt and another one had spontaneous portacaval shunt. 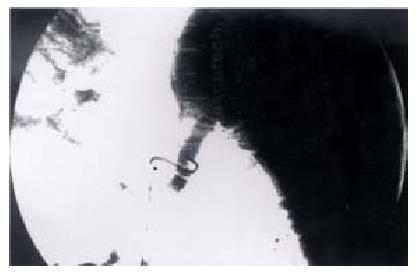 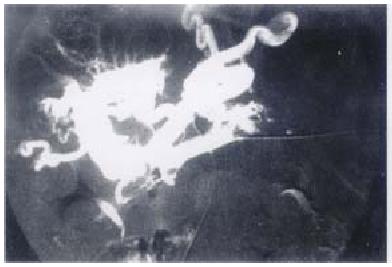 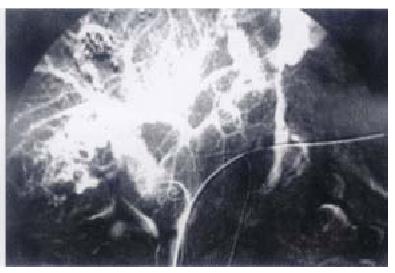 Figure 4 the same patient as figure 3, the variceal blood flow was turned slowly after embolization.
Complication and mortality

All patients’ erythrocyte counts were decreased after the procedure and 5 of them needed blood transfusion. 2 patients experienced hemoperitoneum and 1 patient had mild reactive pleural effusion. All of these counlications were alleviated by conservative treatment. 11 patients had mild or moderate ascites because of severe hypoproteinemia which was controlled by supplying albumin and diuresis (Table 1). Hepatic functions didn’t deteriorate in the patientexcept one who had thrombosis in the main stem of his portal vein and died on the forth day after therapy. Another patient died of acute renal failure on the fifth day after therapy. The procedure-related mortality was 11% (2/18). No severe infection was observed. 9 patients undertook B ultrasound, CT or MRI 1 wk after procedure and no hamato main spleen surrounding area was displayed.

15 of 16 patients whose varices were successfully embolized had been followed up 1 to 12 mo. During the follow-up 13 of these 15 patients died. The cause of death was hepatic failure in 7 patients (1 in 4 d after procedure, 1 in 1 mo, 2 in 3 mo, 2 in 6 mo, 1 in 8 mo). One died of acute renal failure in the fifth day after therapy, 2 died of metastasis, 2 died of ulcer bleeding which were conformed by gastroscope, 1 committed suicide. In the 2 failed cases, one was dead, the other was beyond follow up.

7 of the Nationls was died of hepatis failure which was the main ocuse of the do nth the causes of the ather 6 Natient were different. They night died of acute read failuisinth fifth day after the rany (Icase), of metastasis (2 case), of wher bleading (2 case) and committted suiside (1 case).

Interventional treatments include two different way, one is shunt (for example: transjugular intra-he patic portosystemic shunt, TIPSS), and the other is varices embolization[33-36]. There are some defects of TIPSS: proximal shunt can decrease hepatic blood flow in portal vein, which makes hepatic function deteriorated and restenosis rate high. Traditional embolization route includes transhepatic and transumbilical vein and celiotomy incision to puncture branches of SMV. The latter two have been abandoned because of difficult operation and traumatic problem.

Percutaneous transhepatic variceal embolization (PTHVE) may be useful to control acute variceal bleeding and decreasing mortality. Since PTHVE is less traumatic and its success rate is high, some authors apply PTHVE as a prophylactic management for the patients with severe varices in whom the rate of bleeding is high. However, the premise to perform PTHVE is that main portal vein must be patent and there is no tumor on the route of puncture. HCC has a high incidence in our country. Advanced HCC usually complicated with portal vein cancerous thrombosis (PVCT) which deteriorated the previous portal hypertension. In such patient there was a high incidence of esophageal or gastrio-fundal variceal bleeding. Since main portal vein is invaded and obstructed by HCC and the tumor always impedes the puncture route, the utility of PTHVE islimited. Basing on PTHVE and percutanous transsplenic portography[43], we designed PTVSE to avoid puncturing obstructed main stem of portal vein and to treat embolus in portal vein in addition.

In 16 of 18 patients, the splenic vein was punctured, and superselective catheterization into varices was done successfully. In order to determine the puncture site, most of the patients undertook pre-operative CTA or MRA of portal vein and indirect portography via splenic artery. The rate of success of PTSVE in this group was 89% (16/18), similar to PTHVE and Liang’s report in which 16 of 17 transsplenic portography were done susccsshully under B ultrasound guidance[43]. We find that only Rasinska has reported one case treated by PTVSE in 1987 through our review.

It is suggested that transsplenic puncture might lead to hamorrhage because of decrease of erythrocyte counts after procedure in all patients. But in most of cases, it didn’t need blood transfusion except 5 patients who accepted 2 to 4 units of blood transfusion. Hemoperitoneum occurred in two cases and slight reactive pleural effusion occurred in one. Both of the complications could be alleviated by conservative treatment. Portal vein thrombosis developed in 1 case within 4 d and led to acute hepatic failure. 1 case experienced acute renal failure within 5 d. Both of them died. Procedure- related mortality was 11% (2/18). Examination in 9 patients by imaging modalities 1 wk after procedure, no hamatoma was found around spleen. In addition, 11 patients developed slight or moderate ascites after procedures that were alleviated by heteropathy. No severe infection occurred in all 18 patients. It is suggested that PTSVE be a safe technique relatily[43]. However PTSVE is not the first choice of treatment when PTHVE can be performed because its mortality was higher and may lead to hamorrhage compared with.

No esophageal or gastrio-fundal variceal bleeding occurred in the 15 patients during follow-up. Only two cases had bleeding due to gastric ulcer verified by gastroscope. It is also suggested that PTSVE be relatively effective in short term and similar to PTHVE. Since the life expectancy of patients of HCC complicated with PVCT is short, the long-term follow up seems to be unnecessary.