AIM: To examine the expression of activin A, a member of the transforming growth factor (TGF-β) superfamily, recently has been reported to beoverexpressed in liver cirrhosis, in the course of carbon tetrachloride-induced rat hepatic fibrosis.

METHODS: Hepatic fibrosis was induced in rats by subcutaneous injections of 40% carbon tetrachloride oily solution for a period of 1 to 7 weeks. At the end of 1, 2, 3, 4, 5, 6 and 7 weeks after carbon tetrachloride injections, the rats were killed in group (6-10 rats each time) for study. The activin A messenger RNA expression and its protein localization were assessed by semi-quantitative reverse transcription polymerase chain reaction (RT-PCR) and immunohistochemistry.

Many researchers have tried to elucidate the pathogenesis of hepatic fibrosis[1-11]. Multiple studies have proved that cytokines play a vital role in this process, especially transforming growth factor β (TGF-β ) superfamily[12-21]. Activins are newly found multifunctional proteins that belong to the TGF-β superfamily[22]. There are three kinds of activins, A (βAβA), B(βBβB) and AB(βAβB), which are hetero/homodimers closely related β-subunits of inhibin (βA and βB)[23]. Discovered by virtue of their capacity to stimulate production of follicle-stimulated hormone (FSH) from pituitary gland, activins have widespread anatomical distribution and are implicated in the regulation of many biological processes, including proliferation and differentiation of various types of cells[24]. In liver, ACT A inhibits growth of heptocytes and induces apoptosis, but promotes mesenchymal proliferation and extracellular matrix (ECM) production, and these effects are similar to those of TGF-β[25-27]. Activins and TGF-β may implicate in development of hepatic fibrosis jointly. Sugiyama et al[27] have demonstrated that activin A expression was significantly enhanced in cirrhotic and fibrotic rat livers induced by dimethylnitrosamine (DMN) and porcine serum. However, there has been no consensus of opinion about activin expression changing mode and its cell origins in fibrotic rats liver yet, for some researchers have got different results from those of Sugiyama. By means of RT-PCR and immunohistochemstry, we have examined the activin A expression mode in carbon tetrachloride (CCl4) induced fibrotic rat liver.

Adult male Sprague Dawley rats, weighing 180 g-210 g, were obtained from Shanghai Experimental Animal Institute of the Chinese Academy of Sciences. Hepatic fibrosis rat model was created by subcutaneous injections of CCl4[28-36]. Altogether 72 rats were used. They were randomly divided into the normal control group (6 rats) and model group (64 rats). For the model group rats, CCl4 olive solution (40% CCl4) was injected subcutaneously at a dose of 0.4 mL/100 g twice a week. A double dose was used for the first injection. A same volume of saline was injected in normal control group animals. For study by lots every week (from the 1st to 7th week), 72 hours after last injection of CCl4, 6-10 model group rats were sacrificed. One portion of each liver was immediately frozen in liquid nitrogen for RNA extraction, and the remainder was fixed with 10% (vol/vol) formalin for van Gieson (VG) staining or immunostaining.

Deparaffinized 5 μm thick liver sections were washed three times with phosphate-buffered saline (PBS; pH7.4), incubated in endogenous peroxidase blocking solution (Immunostain EliVision Kit, Maxim Biotech, Inc), and then treated with 0.01 M citrate buffer pH6.0 for 10 minutes in a microwave oven at 650 W. Non-specific-antibody binding was blocked by pretreatment with PBS containing 0.5% bovine serum albumin (fraction V powder, Sigma). Sections were then rinsed in PBS and incubated overnight at 4 °C with diluted monoclonal antibody against activin βA subunit (Serotic, UK) at 1:100 in PBS followed by three washes in PBS containing 0.05% Tween-20. The steps were performed using Immunostain EliVision kit according to the manufacturer’s instructions. Sections were stained with 3,3’-diaminobenzidine tetrahydrochloride (DAB) as a chromogen. The slide was rinsed with distilled water, counterstained with hematoxylin, dehydrated, air dried, and mounted. The negative control slides were treated with nonspecific mouse IgG. The sections were examined under light microscopy.

Total RNA was extracted from liver tissues according to the guanidinium isothiocyanate single-step methods (Kit from Watson Biological Inc, Shanghai). The RNA concentration of each sample was estimated by measuring the absorbance at 260 nm.

Reverse transcription (RT) was performed using RT kit from Bioneer. The 20 μL reaction contains total RNA 2 μg, and oligo (dT)6 12.5 pmol (Sangon, Shanghai). The first-strand cDNA sample (2 μL) was added to 25 μL of a PCR reaction mixture containing 0.5 μM gene-specific primers, 2 mM MgCl2, 0.2 mM dNTP, and 1.5 units Taq polymerase, 2.5 μL 10 × buffer. Activin βA[37] sense primer: 5’-cagtcgtggacggtgcagaagt-3’; antisense primer: 5’-gcctgcggtgaggatggtctt-3’; the predicted size of the amplification products was 474 bp. The glyceraldehyde-3-phosphate dehydrogenase (GAPDH) gene (house-keeper gene) sense primer[38]: 5’-catggtctacacgttccagt-3’; antisense primer: 5’-ggctaagcagttggtggtgc-3’; the 329 bp fragment amplification product was used as a positive control of the reverse-transcriptase receation and tissue mRNA integrity. Amplification conditions included initial denaturation for 5 minutes at 94 °C, 30 cycles of amplification for activin βA and 28 cycles for GAPDH, with denaturation at 94 °C for 45 seconds, annealing at 60 °C for 45 seconds, and extension at 72 °C for 1 minute. PCR products were analyzed by electrophoresis through agarose gel (2% wt/vol) and visualized by ethidium bromide staining and ultraviolet illumination. The length of PCR products was measured by comparison with standard molecular-weight marker. The signal intensity of each band was normalized by comparing it with the intensity of GAPDH.

Results were expressed as mean ± SE. To compare the mean values, ANOVA analysis was applied. Differences were considered significant if P < 0.05. 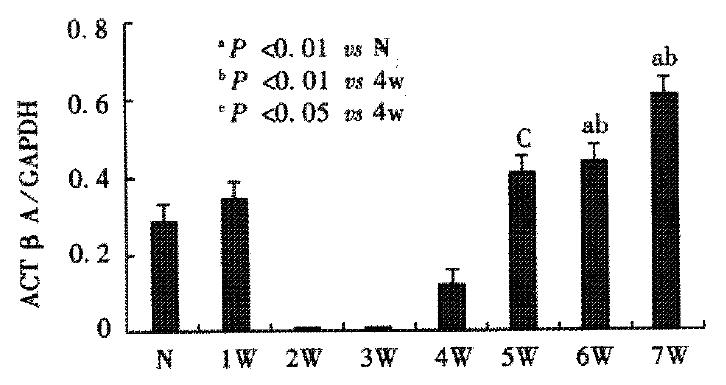 Liver cirrhosis is a final stage of various chronic liver diseases and is characterized by a marked deposition of extracellular matrix, combined with impared hepatic regeneration. Several cytokines are involved in the pathogenesis of this disease[39]. In particular, TGF-β1 is overexpressed in nonparenchymal cells of fibrotic liver of human or animals, and plays a pivotal role in the development of cirrhosis by stimulating fibroblast proliferation and ECM secretion[40-44]. Recent studies showed that activin may also be involved in the development of cirrhosis.

We had used the same hepatic fibrosis model as De Bleser’s, but the results were different. This may be due to a difference in the period of model-making. We found that normal liver expressed activin A, but after injection of CCl4 for 2-3 weeks, activin A mRNA became undetectable, although its protein could still be found. Four weeks later, activin A mRNA increased gradually. But it was not significantly increased until CCl4 was injected for 6 or 7 weeks when hepatic fibrosis had formed completely. This means that most of livers have formed pseudo lobuli. Sugiyama also found that in the early period of hepatic fibrosis induced by DMN, the expression of activin βA mRNA was discreased transiently, and then increased gradually with lapse of time. However, the expression was enhanced continuously in porcine serum-induced cirrhosis. This difference may be due to serious hepatocytic damage caused by CCl4, which is also found in the early stage of the development of DMN induced liver cirrhosis but not in porcine serum induced cirrhosis[47-50]. As activin A acts as an autocrine growth inhibitor of hepatocytes, this transient decrease in expression may promote hepatocytic regeneration. De Bleser reported that activin βA expression disappeared in parenchymal cells of CCl4 induced cirrhosis, but we think that it might be a transient disappearance, for liver cirrhosis was not formed completely. In addition, De Bleser found that activin A expressed in activated hepatic stellate cells (HSC) of fibrotic liver, but according to our result, activin A immunostaining was mainly distributed in hepatocytes around fibrotic areas (Figure 4, Figure 5), a result also consistent with Sugiyama’s reports. So it is worthy of further study to confirm whether HSC expresses activin A or not.

The expression of activin A protein was not complete in conformity with its mRNA. Its mRNA became undetectable after CCl4 injections for 2 to 3 weeks, but activin A protein could be detected by immunohistochemistry. Sugiyama described similar phenomenon in DMN-induced cirrhosis. This may be because of the fact that the mRNA level was too low to be detected by our method. Of course, other reasons may exist and worth further studying.

In summary, our study shows that in CCl4-induced rat cirrhosis, the expression of activin A is decreased transiently at first, and then increased gradually. Activin A may be involved in the late stage of the development of liver cirrhosis. Distribution of activin A also changes with the development of fibrosis, that is from hepatocytes around central veins to hepatocytes around fibrotic areas including central vein, connective septa and portal tracts.