Immunohistochemistry and immune electron microscopy were used to determine the keratin and collagen I polypeptides expressed in gastric mucosa and gastric cancer. We found that the canceration of gastric epithelia and the infiltration and metastasis of gastric cancer are closely related with cellular skeleton and extracellular matrix[1]. The in situ hybridization (ISH) technique, developed by Gall and Pardue in 1969[2,3], has become an essential tool for detecting the localization of synthesis and abundance of RNA transcripts on tissue sections. With a K6 (Mr 56000) keratin cDNA probe and a collagen I α1-chain cDNA probe, the cDNA-mRNA ISH technique was used to study changes of keratin mRNA and collagen I mRNA expression in gastric mucosa and gastric cancer.

Biotinylated probes of K6 keratin cDNA and collagen I α1-chai n cDNA were prepared from the Pst I fragments cloned at plasmid PBR322 (Amersham). The probe preparation was essentially carried out according to the methods of Obara et al[4,5] by randomly primed in vitro transcription, with the use of biotin-11-dUTP (BRL).

Formalin-fixed, paraffin-embedded tissue sections were cut and mounted on glass slides that had been treated to inactivate RNase and coated with 0.05% polyly sine (Sigma). All hybridization procedures were tested according to Plummer et al[3] and Mandry et al[6].

The sections were deparaffinized in xylene, washed in alcohol, and then air-dried. After washed in PBS, the sections were treated with 3 mg/L proteinase K ( Sigma ) in 10 mmol/L Tris-HCl, pH 7.4, 2 mmol/L CaCl2 for 10 min at 37 °C, and washed in PBS containing 0.2% glycine followed by fixation in 4% paraformaldehyde for 5 min at 37 °C, and then dehydrated and air-dried. All sections were covered with prehybridization buffer (50% formamide, 2 × SSC, 2 × Denhardt’s solution, 10% dextr an sulfate, 500 mg/L herring sperm DNA, 500 mg/L yearst tRNA) for 60 min at room temperature. The labeled probes were diluted to the concentration of 0.5 mg/L in the same buffer, heat-denatured at 100 °C for 5 min. Each section was overlaid with this hybridization solution, covered with a coverslip, and then incubated overnight for 24 h at 44 °C in moist chamber. Posthybridization washing was either with 50% formamide in 2 × SSC or with 1 mmol/L-EDTA in PBS. Blocking solution containing 3% BSA and 1 mmol/L EDTA in 0.1 mol/L, pH 7.4, TBS was used to reduce background staining, 10 min at room temperature, followed by a brief washing in distilled water. Tissues were reacted with 1:20 streptavidin-peroxidase (Maxim) in the blocking solution for 60 min at 37 °C, washed thoroughly with 2 × SSC and 0.1 mol/L, pH 7.4, TBS, and revealed by the addition of hydrogen peroxide and AEC, finally counterstained with hematoxylin.

The positive cases demonstrated by light microscopic ISH on paraffin sections were chosen to be used for ultrastructural ISH, including 22 cases of gastric mucosa and 49 cases of gastric cancer. The prepared samples fixed in PG fixative solution were washed in PBS containing 5% sucrose, cut into 30 μm-50 μm thick oscillating sections and mounted on slides. The ultrastructural ISH steps, including enzymatic digestion, denaturation, hybridization, and detection probe, were carried out the same as in light microscopic ISH, with the exceptions of probe concentration of 0.1 mg/L and streptavidin-peroxidase working titer of 1:100.

After the hybridization signals had been revealed, the sections were gently separated from slides and carefully folded to tissue blocks, followed by postfixation in 1% osmium tetroxide. The following procedures, including dehydration, embedded in Epon-812, ultrathin section making and staining with lead citrate and uranyl acetate, were executed according to the conventional steps of diagnostice lectron microscopy. Finally, the hybridization signals were observed under H-300 transmission electron microscope.

Negative controls included the sections digested previously with RNase A (Sigma) and the sections incubated in prehybridization solution without probes, all of which had undergone the simultaneous ISH processes.

Under light microscopy, different extent of hybridization signals was found in 22 of 40 cases of gastric mucosa, and positive grains were found in 49 of 58 cases of gastric cancer. The gastric epithelial cells positive for keratin mRNA were scattered in mucosal glands, especially in the bases of glands. The hybridization grains were tiny and dense in cytoplasm. Keratin mRNA in cancer cells increased, the quantity and distribution of positive grains were related to the histological type and differentiation of cancer cells. In well-differentiated cancer, the grains in cancer cells were thick and coarse, while in poorly-differentiated cancer, the positive grains distributed in all cytoplasm matrix and always gathered to form slices (Figure 1). 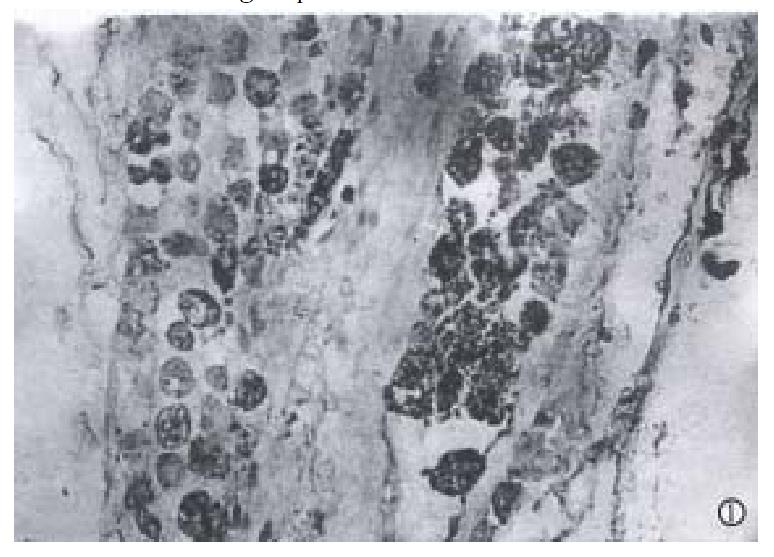 Ultrastructurally, 8 cases showed positive reaction in 22 cases of gastric mucosa, and 21 cases positive signals were found in 21 of 49 cases of gastric cancer. The positive grains in the epithelia were tiny and distributed in cytoplasm, especially more around nuclei (Figure 2). In cancer cells, keratin mRNA positive grains increased and appeared in two forms, one was tiny grains gathered in certain sites of cytoplasm and distributed irregularly, most of which came out in poorly-differentiated cancer cells; the other was coarse grains scattered evenly in cytoplasm, which mostly emerged in well differentiated cancer cells (Figure 3). The sections of cancer tissue, through the treatment of RNase A before ISH, had few tiny grains in cytoplasm of cancer cells. 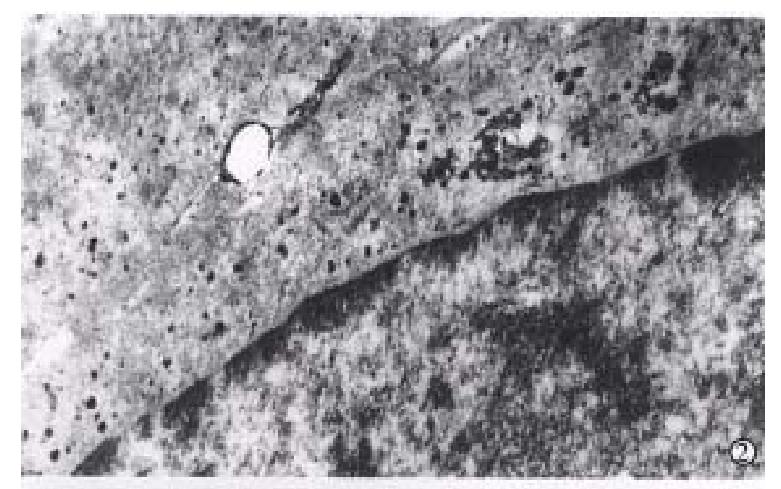 Figure 2 Normal gastric mucosa: the positive grains for keratin mRNA in the epithelial cell were tiny and distributed around nucleus. × 15000 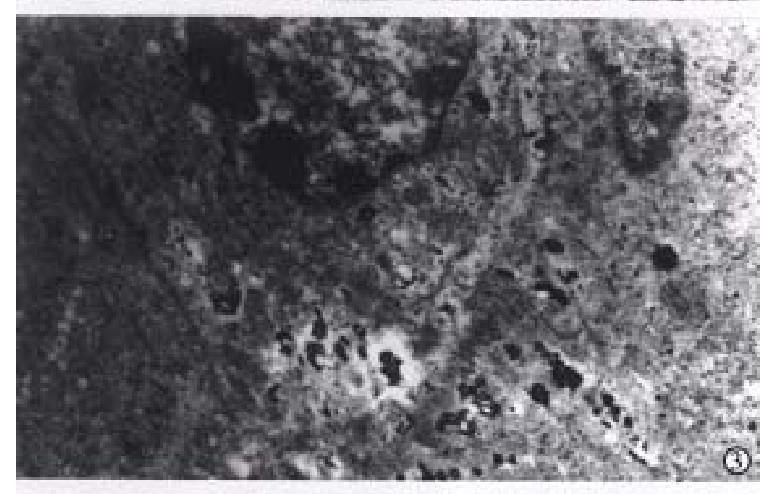 Collagen I mRNA positive reaction was localized in the cytoplasm of mesenchymal cells, like fibroblasts in mucosal and cancer stroma. The reaction in mucosal mesenchymal cells showed dense black staining. In the stroma of well-differentiated cancer, the positive cells distributed around or in the cancer nests dispersively, most cells had coarse and thick grains and some cells only had a few tiny grains (Figure 4). In poorly-differentiated cancer, collagen I mRNA reaction distributed irregularly in fibroblasts was dense and looked like the form of dust. 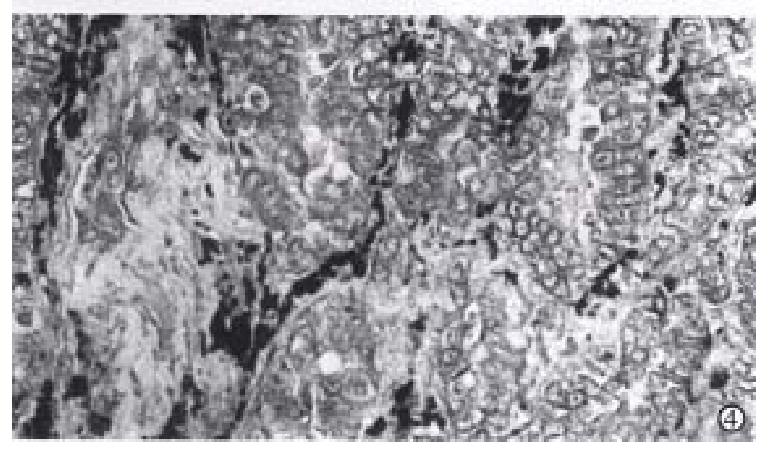 Comparison of mRNA expression in gastric mucosa and gastric cancer is shown in Table 1.

In the past experiments, immunohistochemistry was used to localize cellular skeleton and extracellular matrix at gene product levels. But it is unable to differentiate active production of proteins on site from proteins stored in passive cells[4]. A valuable alternative is the detection of mRNAs by ISH which can identify specific cell types actively transcribing specific genes. With the use of K6 keratin cDNA probe and collagen I α1-chain cDNA probe, the detection of specific mRNAs by ISH was applied to the study of their changes in gastric mucosa and gastric cancer. On paraffin sections, the expression of keratin mRNA and collagen I mRNA in target cells was directly observed, and on ultrathin sections, keratin mRNA positive reaction was observed under electron microscope. But on sections that had been treated with RNase A before ISH and hybridized without probes, no obviously positive reaction grains were found. The results demonstrated that the hybridization signals originated from RNA. The technique of pre-embedding hybridization and tissue section posthybridization treatment, is a new pre-embedding method for ultrastructural ISH. Although pre-embedding technique has the disadvantages of loss of ultrastructural membrane detail and potential loss of label during the embedding procedure, it is sufficient to localize mRNA ultrastructurally and to study the transcription and expression of genes.

The keratin, characteristic of epithelial cells, represents a complex family of 19 different components with molecular weights varying from Mr 40000 to Mr 67000. Because individual keratin is synthesized from d ifferent mRNA, the transcript level of specific keratin reflects changes in the expression of the genes, cDNA probes for various keratin mRNAs from various spec ies have been produced. With K6 keratin cDNA probe, which has been shown to be complementary to the mRNA for the Mr 56000 keratin and to share significant homology with the mRNA for Mr 58000 keratin[4], the positive hybridization signals appeared clear in gastric mucosa and gastric cancer. The hybridization grains in epithelia were tiny and distributed around nuclei, and the grains in cancer cells increased (P < 0.05), often gathered to coarse grains or slices, and distributed heterogeneously, especially in poorly-differentiated cancer cells. The results, unanimous with that of immunohistochemistry[1], demonstrated further that the increase of keratin in cancer cells is due to its active synthesis in cancer cells. This ability to synthesize cellular skeleton protein is related to the active reproduction and strong motility. The positive rate of keratin mRNA by ISH in gastric mucosa and cancer was lower than that of keratin by immunohistochemistry[1], due to loss of hybridization information during the sample treatment and weakness of gene expression in some cells.

Collagen I, one of extracellular matrix components, mainly arises from mesenchymal cells. A few investigators, with immunohistochemistry and ISH, described that epithelial tissue and cancer cells, such as hepatocytes and hepatocarcinoma cells, can produce collagen I[7]. With the use of collagen I cDNA probe, we found that collagen I mRNA was expressed only in mesenchymal cells. Further study will prove whether this is related to the difference of probes or not. In gastric cancer stroma, the hybridization grains were thick and dense in mesenchymal cells which were distributed around or in the cancer nests. The active synthesis of collagen I plays an important role in the formation of fibrous capsule around cancer nests and in the inhibition of cancer cell infiltration and metastasis. During the process of cell canceration and cancer infiltration and metastasis, some changes will occur in extracellular matrix including collagen I, possibly due to the changes of synthesis and degradation of these components[1,8]. In our current study, the expression of collagen I in cancer stroma had no obvious changes compared with that in gastric mucosa (P > 0.05), so that we believe that the degradation yielded by cancer cells is an essential factor in the changes of extracellular matrix. This degradation is of great impo rtance to the infiltration and metastasis of cancer cells.

Project supported by the Military Youth Science Fund of Ch ina, No. 94008