AIM: To clarify whether endotoxin is of pathogenic importance for hepatocarcinogenesis,or the increased cancer risk results solely from thecirrhotic process.

METHODS: The rat model of hepatoma was treated by the intake of 0.03% thioacetamide in drinking water for six months. During induction of hepatoma, rats were additionally treated with splenectomy and/or lipopolysaccharide administration. The liver nuclear DNA index and proliferation index were quantitatively analyzed by flow cytometry. Hepatic histology was examined with light and electron microscopes. Plasmic endotoxin concentration and γ-glutamyl transpeptidase activity were measured, and hepatoma incidence was recorded.

Endotoxemia is often associated with hepatic injury and cirrhosis[1]. Patients with hepatic cirrhosis or hepatocarcinoma often present a 3 to 8-fold high systemic endotoxemia above normal[2]. If cirrhosis is established, there is a 200-fold increased risk for development of hepatocarcinoma[3]. It is unknown whether endotoxin is of importance in hepatocarcinogenesis. Recognized etiologic or pre-disposing factors include chronic liver disease caused by hepatitis B, C and D; hepatotoxins such as aflatoxin and alcohol; and cirrhosis of any cause[4]. The pathogenetic mechanisms involved in human hepatocarcinogenesis remain largely unsolved.

Numerous animal models of cirrhosis have been developed[5,6]. Continuous administration of thioacetarnide (TAA) in drinking water to rats produced cirrhosis in 4 months and hepatocarcinoma in 6 months[7]. The histology of the TAA model was more similar to human cirrhosis than that of the CCl4-treated rats[8]. Wistar rats were used in the TAA model.

MATERIALS AND METHODS
Animals and treatment

Analysis of endotoxin and γ-glutamyl transpeptidase activity in plasma

Endotoxin in plasma was determined by means of a chromogenic limulus amebocyte lysate (LAL) assay[9]. Limulus kit (Shanghai Yihua Clinical Medical Biotech Co.) was used for endotoxin-specific quantitative measurement in this study. Syringes, needles and glasswares were made pyrogen-free with dry heat (200 °C for 4 h). The plasma was pre-treated with perchloric acid (PCA) for removal of the possible inhibitors to LAL assay. Briefly. 0.1 mL of 0.18 mol/L NaOH was added to a 0.1 mL of test plasma and incubated at 37 °C for 5 min. Then 0.1 mL of 0.32 mol/L PCA was added for an additional 10 min incubation. The precipitate formed was dissolved by addition of 0.2 mL of 0.18 mol/L NaOH with vigorous mixing. The solution was centrifuged at 2000 rpm for 10 min. Then 0.05 mL of the supernatant diluted with 0.05 mL of 0.4 mol/L Tris-HCl (pH8.0) was added to 0.1 mL of limulus amebocyte lysate (LAL) in pyrogen-free cuvette, and incubated in a thermostatic bath at 37 °C for exactly 30 min. The synthetic chromogenic substrate 0.05 mL, n-tert-butoxycarbonyl-L-leucyl-L-glycyl-L-arginine-p-nitroaniline (Boc-Leu-Gly-Arg-PNA) was added to the lysate and incubated for 5 min. The reaction was stopped with 0.5% sodium nitrite. The amount of PNA released from the substrate was detected after diazo-coupling by adding 0.5 mL of 0.05% ammonium sulfate and 0.5 mL of 0.05% n-l-naphthylethylenediamine dihydrochloride. Ab-sorbance was read at 545 nm on 721A spectrophotometer, using distilled water as the 0 absorbance value. A standard curve was plotted with the known endotoxin concentration for each run. Simultaneously, saline replacing plasma was as reagent control.

γ-glutamyl transpeptidase (GGT) activity in plasma was detected according to the method as de-scribed by Xu KC[10]. In brief, 0.1 mL of plasma was added to a 0.5 mL of 10 mmol/Lsubstrate, γ-L-glutamyl-α-naphthytamide (Shanghai Third Reagent Factory), and incubated at 37 °C for 120 min. The amount of α-naphthylamide released from the substrate was detected after adding 10 mL of 0.2% sul-fanilicacid and 0.004% sodium nitrite. The absorbance was read at 500 nm on a 721A spectrophotometer, using sample control of adding plasma after 120 min incubation as the 0 absorbance value. A standard curve was plotted with the known α-naphthytamide concentration for each run.

One half of the left lobe of the liver was resected, fixed in 10% neutral-buffered formalin and embedded in paraffin. Paraffin sections were stained with hematoxylin-eosin (HE) for light microscopy. For electron microscopic study, the selected areas with hepatocarcinoma were cut into small pieces and fixed in 2% glutaraldehyde for 2 h. After post-fixation in 1% osmium tetroxide, the fragments were dehydrated in a graded alcohol series and embedded in Polybed. They were trimmed into ultra-thin section and stained with uranyl acetate and lead citrate, and observed under an electron microscope at 100 KV.

According to Zuo LF[11], with slight modification. The specimens for flow cytometry were prepared immediately after removal of liver. About 2 g tissue was mechanically minced in 5 mL of 0.05% collage-nase (type IV, Sigma) and then through a 200 mesh filter. After washing with 0.1 mol/L phosphate buffer solution (PBS), the well-dispersed hepato-cytes were resuspended and fixed in 70% ethanol overnight, the cells were stained with propidium iodide reagents (propidium iodide 50 mg/L, RNase 20 mg/L, and Triton-X-100 1%) at 4 °C for 30 min. Chicken erythrocytes were used as internal controls. Flow cytometry was performed on a Fluorescence Activated Cell Sorter (FACS) 420 cytometer (USA). Data were analyzed on a compatible computer with HP-300 consort 30. A total of 104 cells were examined for each sample, DNA index (DI) expressed as a relative DNA content, wascalculated by dividing mean channels of G0/1 peak in the treated rat by that of sham group. The coefficient of variation (CV) of G0/1 peak of the DNA ploid population was expressed by normalized standard deviation (CV = standard deviation/mean peak position × 100). CV was always less than 5%. For the DNA ploid criteria, it was classified as DNA-dipoid if DI = 1.0 ± 2CV, and DNA-aneuploid if DI ≠ 1.0 ± 2CV. Cell cycle parameters were analyzed by DNA cell cycle analysis software Sum of Broadened Rectangles Model, and the cell proliferation index (PI) was expressed as the percentage of cells in S plus G2M phases.

All results were expressed as x ± s. Data were analyzed by Student’s t test and multiple regression. P values < 0.05 were considered statistically significant.

The oral intake of TAA in drinking water induced cirrhosis and, in some rats with hepatocarcinoma with null mortality. TAA-treated animals showed a progressive decline in body weight, particularly in the first month (data not shown). On the contrary, the ratio of liver weight to body weight were obviously higher in all TAA treated animals (P < 0.01), compared with the sham group. The hepatocyte proliferation index was fairly high in the TAA + LPS or TAA + ST groups, and the highest in the TAA + ST + LPS group (P < 0.05) compared with the TAA-model control (Table 1).

The livers of rats in the TAA control group showed many superficial yellowish macronodules and one case of visible hepatocarcinoma out of six rats. With LPS administration and/or splenectomy, numerous micronodules appeared in livers and more cases of noticeable tumors. Moreover much more hepatocarcinomas were observed under the light microscope. DNA index as an indicator of the severity of malignant lesions were stepped up in the TAA models additionally treated with LPS and/or splenectomy. Therefore, they have significant differences between groups (P < 0.02), particularly in the splenecotomized TAA-treated rats with oral LPS administration (Table 3).

Under the light microscope, no noticeable changes were observed in untreated control rats (Figure 1). The livers of the TAA models with or without LPS and/or splenectomy had numerous micronodules of various sizes in all lobes. The nodules were separated by markedly proliferated collagen fiber, forming pseudolobules. Proliferation of spindle cells, probably fibroblasts, was recognized around such hyperplastic nodules (Figure 2). In the transforming hepatocytes, atypical hyperplasia with nuclear heterochromatism and basophilic cytoplasm were seen mainly in perivenular and in periportal areas. Nuclear atypism was also seen in the hepatocytes. Moreover, disarrangement of the hepatic cords be-came apparent and formed considerable pseudoglandular (acinar) structures which were transformed from original liver parenchymal cells (Figure 3). Highly malignant lesions were observed in the TAA + ST + LPS group, in which atypism was more apparent and formed a “mucoid lake” with a float of small atypical cells (Figure 4). 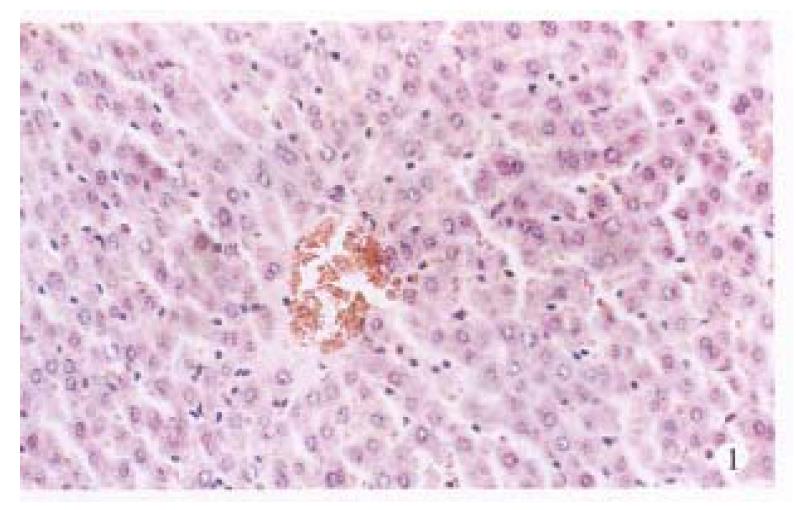 Figure 1 Section of liver from an untreated control (sham) rat. HE × 20. 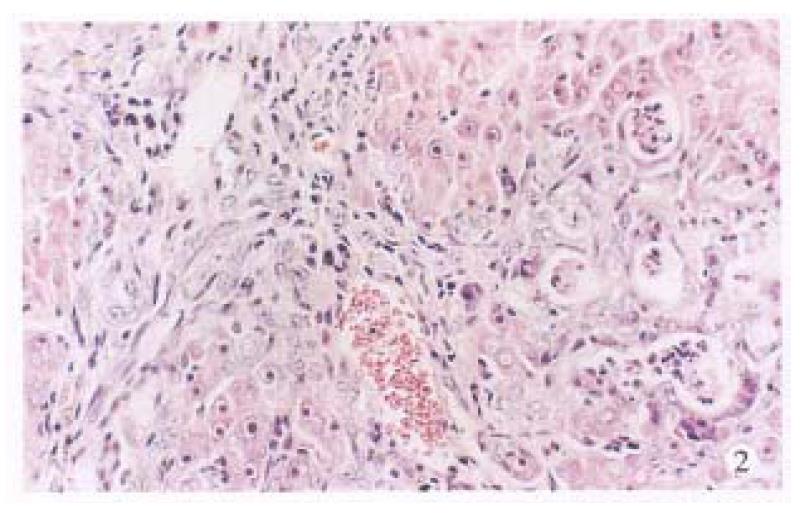 Figure 2 Section of liver from a TAA control rat treated as described in Materials and Methods. The nodules show the transforming hepatocytes and the hepatocarcinoma. The spindle fibroblasts are recognized around such hyperplastic nodules. HE × 20. 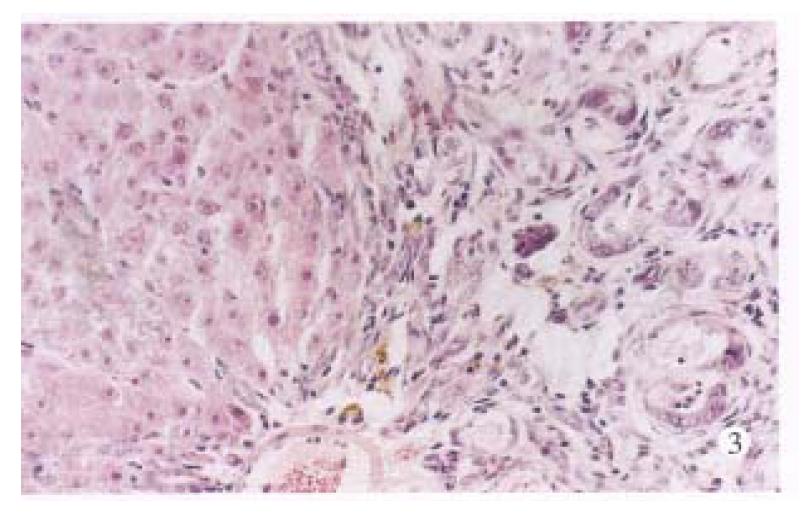 Figure 3 Section of liver from a rat in TAA + ST group. Pseudoglandular structures and spindle cells are observed in perivenular areas. HE × 20. 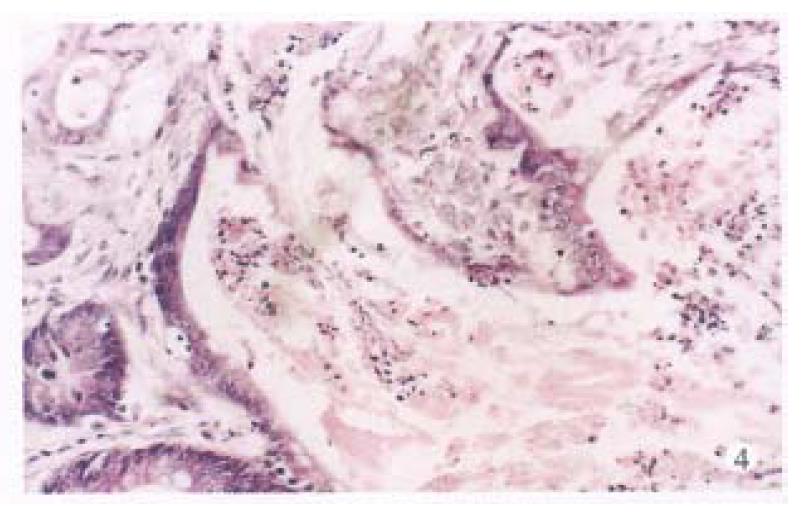 Figure 4 Section of liver from a rat in TAA + ST + LPS group. The disorganized and atypical hepatocytes formed a “mucoid lake” with floating of small cells. HE × 20. 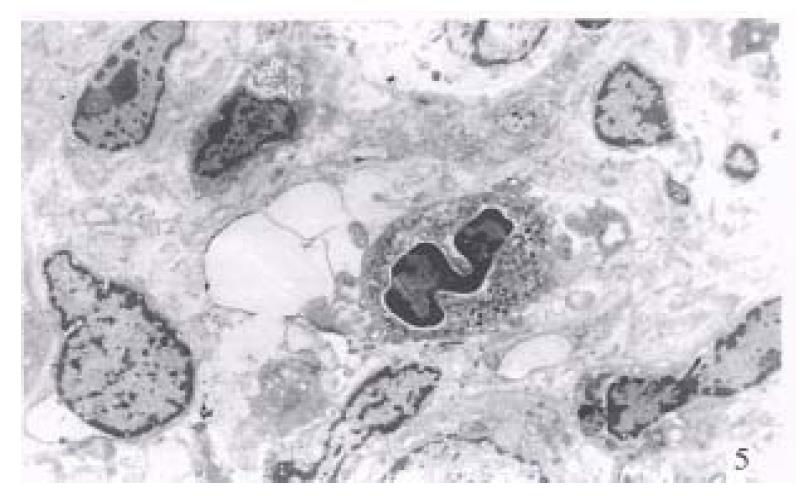 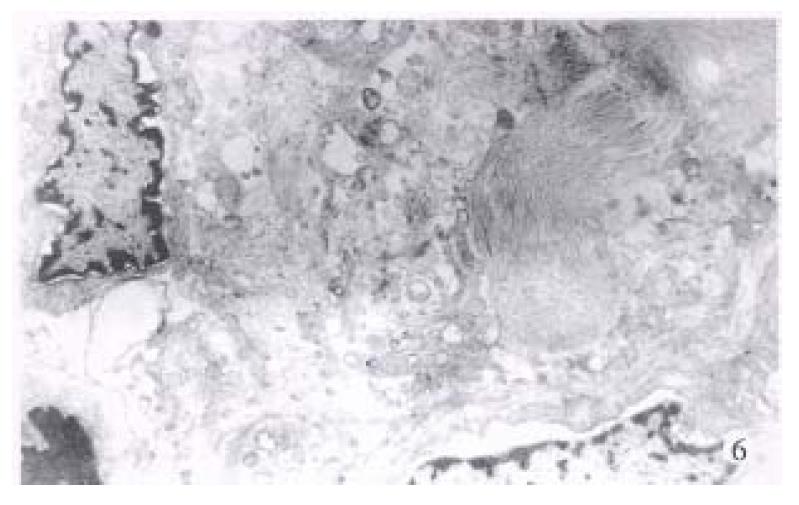 Figure 6 Ultrastructure of cirrhosis from a rat in TAA + ST + LPS group. The bundles of collagen fibrils were present with atypical hepatocytes. Uranyl acetate and lead citrate staining × 800.
DISCUSSION

TAA-induced cirrhosis and hepatocarcinoma has been observed in Wistar rats. Theresults of the present study demonstrated for the first time that endotoxin may play an important role in the development of hepatocarcinoma in rats induced by continuous administration of 0.03% TAA in drinking water.

DNA index representing a ratio of the DNA content in the treated rat to the mean DNA content of the diploid normal rats indicate precise malignity of hepatocarcinoma, together with aneuploidy rates in various groups, which were highly correlative to the incidence of hepatocarcinoma (the former r = 0.98, P < 0.01; the latter r = 0.96, P < 0.01). Moreover, the histologic studies with light and electron microscopes well confirmed the interesting findings. In the hepatocyte, clonal perpetuation of accumulated DNA aneuploid affecting growth regulatory genes eventually leads to a continuation of severe progressive abnormalities characterized by dysplasia, formation of adenoma and, finally, cancer[13]. In addition, plasma GGT activity, an enzyme of fetal hepatocytes, was a sign of poor differentiation and correlated with cancerous change (r = 0.93, P < 0.05) and the degree of endotoxemia (r = 0.88, P < 0.05).

Like Kupffer cells, splenic macrophages have a potential for endotoxin clearance by way of phagocytosis. In this study, rats undergoing splenectomy showed reduced endotoxin clearance and increased enterogenic endotoxin levels in systemic circulation by 37% (P < 0.05). And rats with cirrhosis after LPS administration at a dose of 50 μg/100 g body weight daily for two months in-creased their endotoxemia by 24% (P < 0.05), compared with the normal controls. When the rat endotoxemia increased, inhibition of hepatic DNA synthetic enzymes by endotoxin[12] resulted in a decrease of liver weights and formation of micronodules in comparison with the TAA control rats with macronodules. In addition, splenic macrophages have an ability to generate tumor necrosis factor-α and play an important role in immunosurveillance[13,14]. Therefore the down-regulation of Kupffer cell activity after splenectomy may have deleterious effects on host defenses[15].

This study shows that endotoxemia from orally administered LPS, during the last two months, and/or from splenectomy before commencement of the experiment, significantly enhanced hepatocarcinogenesis (P < 0.02), based on the alterations of the DNA index. It seemed that the TAA model with splenectomy combining LPS administration was more deleterious to the development of hepatocarcinoma in rats than the TAA model treated with ST or LPS solely. In addition, it was noticed that the blood endotoxin levels in rats were significantly correlated with malignity (r = 0.96,P < 0.01) and the incidence (r = 0.99, P < 0.01) of hepatocarcinoma. If so, it may be of importance in the pathogenetic process of hepatocarcinoma and in clinical therapeutic strategy. However, patients with cirrhosis presenting relatively high endotoxemia[2] may have higher risk for development of hepatocarcinoma epidemiologically[3], but what are the possible mechanisms involved in the pathogenesis and whether this result may be extrapolated into humans await further studies.

Project supported by the Funds of Shanxi Provincial Commission of Science and Technology, No. 96025.