CONCLUSION: 99mTc-HAb18 McAb Fab fragment could be specifically localized in the tumor of nude mice bearing human hepatocellular carcinoma within 24 h and this method might be effectively used for labeling McAb Fab fragment with 99mTc.

Many methods have been reported to radiolabel in-tact MAbs with 99mTc[1]. Since the long imaging time of intact McAb Hab18 (> 48 h) is not compatible with the 6 h physical T1/2 of 99mTc, it seems preferable to use antibody fragments for 99mTc labeling, as the fragments have smaller molecular mass, can be cleared more rapidly from the blood, and potentially increase the tumor/non-tumor ratio (T/NT). The method of labeling fragment with 99mTc is therefore one exploring aspect. In this paper, 2-iminotholane (IT) was used to modify anti-hepatoma McAb HAb18 Fab fragment, and then IT-Fab fragment modifier was labeled with 99mTc by transchelation from 99mTc-glucoheptonate (GH). Successful results were obtained when 99mTc-IT-Fab was injected into the nude mice bearing human hepatoma for radioimmunoimaging (RII).

The anti-hepatoma McAb HAb18 (10 g/L, purity > 95%) was prepared and supplied by the Hepatoma Targetting Drug Research Laboratory, Department of Pathology, the Fourth Military Medical University. McAb HAb18 belongs to IgG1 subclass and its affinity coefficient (ka) is 8.17 × 10.9 L/mol. The antigen is about 61 kd and has no crossreaction with AFP, CEA, and ferritin. IT is a product of Sigma Chemical Co.; 5.5’-dithiobis (2-nitrobenzoic acid) (DTNB), Fluka Co; papain, Merck Co.; and GH and MDP kit was supplied by the Institute of Jiangsu Nuclear Medicine. TEA-B-1 solution: a mixture of 1.0 mol/L TEA and TEA HCl solution (1:1 v/v), pH8.0; TEA-B2 solution: a mixture of KCl (50 mmol/L) and MgCl2 (1 mmol/L) with the TEA-B-1 solution; TEA-B-SH solution: 1% 2-mer-captoethanol of TEA-B-2 solution; IT solution: IT (0.25 mol/L) dissolved in TEA-B-1 solution.

Human hepatoma was subcutaneously implanted in the neck or the upper lumber side of NC or BALB/c nude mice. The model was named SMMC-LTNM[2]. The mice were maintained in an aseptic condition and used for experiment when the tumor increased to 0.5 cm-1.4 cm in diameter.

Jue’s method[4] was used with some modification. Briefly, HAb18 Fab fragment (4 g/L) was dialyzed overnight against TEA-B-SH solution, then mixed with IT solution (6 mmol/L in concentration) at 0 °C reaction for 20 min. The mixture was dialyzed against the TEA-B-2 buffer at room temperature (20 °C) for 3 h with a buffer change each hour. After that, the mixture was run through sephadex G50 column which was absorbed with bovine serum albumin (BSA), and eluted with 0.05 M PBS at a speed of 1 mL/min. The protein fraction was collected under UV-280 nm monitoring, concentrated to 4.4 g/L, divided into 220 µg/vial, and lyophilized for us.

Determination of sulfhydryl groups with DTNB

According to Ellman’s method[5], protein samples (0.5 mL) were mixed with 2.5 mL 0.05 mol/L Tris-Hcl buffer (pH8.4), and 0.025 mL 0.01 mol/L DTNB solution. Half a mililiter of distilled water instead of protein sample solution was used as blank control. The increase in absorbance at 412 nm was followed using a spectrophotometer (Lambda 2S). By means of the formula sulfhydryl group (µmol)= A412/0.5 × 13.6, the number of sulfhydryl group was calculated according to protein concentration (µmol).

Radiolabeling yield and radiochemical purity were determined by paper chromatography (PC) using No.1 Xinhua filter paper strips (saline as a solvent, 99mTc-IT-Fab and 99mTcO2 Rf = 0-0.1, 99mTcO4 Rf = 0.7-0.8. Acetone as a solvent, 99mTc-GH Rf = 0, 99mTcO4 Rf = 1); or instant thin layer chromato-graphy (ITLC) using ITLC-SG paper (Gelman Co), (1% BSA pretreated, alcohol:NH3H2O:H2O = 2:1:5 as a solvent, 99mTc-IT-Fab and 99mTcO4 Rf = 1.0 99m TcO2 Rf = 0) and gel column chromatography (GCC) with sephadex G50 (0.9 cm × 15 cm diameter), 0.05 mol/L PBS, pH7.4, as an eluent. The protein labeling yield was calculated by routine method. Immunoreactivity assessment: in vitro immunoreactivity of 99mTc-IT-Fab was evaluated by a conventional live cell assay. Briefly, hepatoma cell suspension was prepared by mincing SMMC-LTNM tumor tissues from the mice model. It was centrifuged and washed with phosphate-buffered saline (0.1 mol/L-PBS); then 10 µL diluted 99mTc-IT-Fab (10 × 103 cpm) and 0.5 mL PBS was added, and the mixture was incubated at 37 °C for 2 h. After incubation, the samples were then centrifuged and the supernatants were removed. The cells were further washed with 1ml PBS solution by centrifugation. Before and after the removal of supernatant, the activity of samples was counted in a γ-counter, and the percentage of binding was calculated.

99mTc-IT-Fab 18.5 MBq/0.2 mL was intravenously injected into each nude mouse bearing human hepatoma xenografted model by the tail vein, and the mice were sacrificed 5 h after the injection. The blood and major organs were removed, weighed and counted in the γ-counter for radioactivity, the tumor/blood ratio and the tumor/organ ratios were calculated.

Fab fragmant yield was 30%-40%, and single peak was found by HPLC. The molecular mass weight was identified as 45 kd by SDS-PAGE. The number of sulfhydryl group per molecule of IT-Fab and Fab fragment was 0.3 and 0, respectively. 99mTcO2 was less than 0.5%. The immunoreactivity was 30%-40% by cell binding assay. The biodistribution study showed that the T/NT ratios of tumor to the blood, the heart, liver, lung, speen, kidney, stomach, intestine, muscle, and brain were 0.89, 4.1, 1.1, 8.0, 5.2, 0.1, 1.6, 4.8, 4.8 and 33.1, respectively. Animal imaging showed that 99mTc-IT-Fab was rapidly distributed to the whole body when injected i.v. and the radioactivity rapidly appeared in the bladder. The body distribution via intraperitoneal was 10 min-30 min later than that of the i.v. injection. The tumor was visible with high back-ground at 1 h-2 h; the accumulation of the tumor was evident with clear kidney imaging 4 h-8 h after the injection, and a relatively increased tumor localization was seen with low background and decreased kidney outline 12 h-22 h after injection (Figure 1). The T/NT (on the back muscles) ratios by ROI were 5.18 and 7.48 at 4 h and 8 h. In control group, 99mTc-GH rapidly appeared in the blood pool and the whole body, and accumulated rapidly in the bladder. The two kidney imagings were clear, but no tumor accumulation was seen 6 h after the injection with two dim kidney outlines and low background. Radioactivity was removed in urine and the bladder image disappeared gradually. 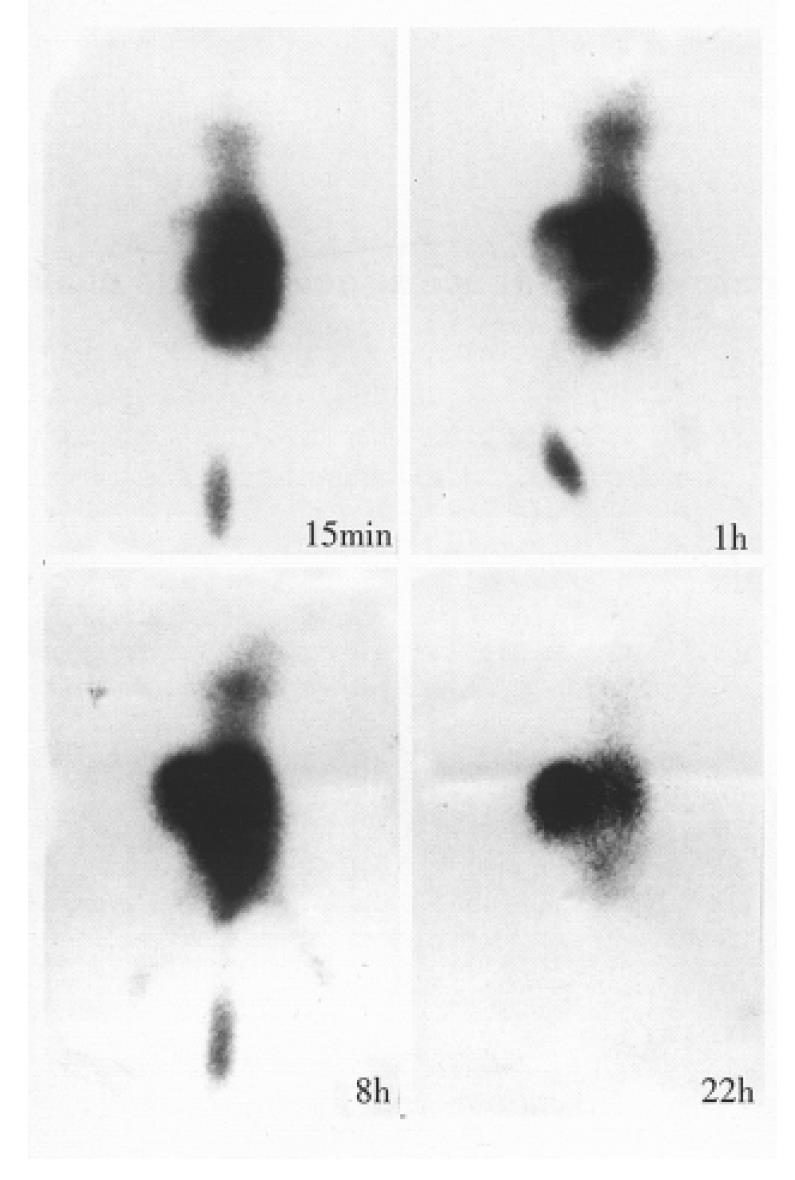 99mTc labeling McAb F(ab’)2 and Fab’ fragments have been reported by some authors[1], but Fab fragment was rarely seen. In terms of the clearance, intact IgG was the slowest, F(ab’)2 frag-ment in the middle, and Fab’ or Fab fragment the fastest. As for preparation, Fab’ fragment was pre-pared from the reduction of F(ab’)2 fragment and then was followed by purifying procedure. The key step was the difficult control of reduction condition. F(ab’)2 fragment was prepared and purified from pepsin or papain digestion. Fab fragment was also prepared by papain digestion and then purification, but because of the small number of sulfhydryl group per molecule, Fab fragment was difficult to label with 99mTc. We used 2-iminothiolane (a chemical compound, MW: 137) to modify Fab fragment, so the number of sulfhydryl group per molecule of IT-Fab was increased from 0 to 0.3. Park et al[6] reported that the number of sulfhydryl group per molecular of F(ab’)2 was 4.2 and Fab 0.9. The difference might have resulted from the treatment with SnCl2 before the measurement. Rhodes[7] reviewed that the protein to be labeled need to contain free sulfhydryl (-SH) group or reactive monosulfides (-S or -S-metal), and the labeling yield was significantly and positively related to the number of sulfhydryl group. We have modified F(ab’)2 with 2-iminothone in the same way (with the number of SH per molecule of 0.7) and labeled with 99mTc. The labeling yield was 92% by PC, which was higher than that of 99mTc-IT-Fab (50%-80%). This result proved what was mentioned above. Paik[6] proposed that there were two sites on the IgG molecule, one with a high-affinity and low-capacity and the other with a low-affinity and high-capacity. In our study, 50%-80% of labeling yield was obtained by PC, and 20%-30% by GCC, which suggested that the same phenomenon existed on the McAb fragment. Because of the low-affinity binding, 99mTc was cleared on the column by Sephadex G50. GH, as a renal function imaging agent, was rapidly excreted from the kidney, and was reported to have some tumor-affinity characteristics[8]. But the present results demonstrated that 99mTc-GH had no affinity to hepatoma. This proved the specificity of 99mTc-IT-Fab localized on the tumor. The best tumor imaging was at 12 h-22 h after the administration of 99mTc-IT-Fab. The background excretion was mainly by kidney route. This was similar to the reported imaging time and excretion route of 99mTc-Fab’[9]. The biodistribution was mainly in the kidney (32.6% ID/g) and next in the blood, the tumor, liver, and stomach. Our results demontrated that 99mTc-IT-Fab could bespecifically localized in the tumor of nude mice bearing human heptocellular carcinoma within 24 h, and this method could be effectively used for labeling McAb Fab fragment with 99mTc.

Project supported by both “863” National Biological High-Tech Project Foundation and the State Key Laboratory Foundation of Nuclear Medicine, 863-02-12(1) and SKLFNM 9402.