METHODS: The poly (A) mRNA was extracted from human fetal liver tissues of 4-5 month gestation, fractionated by size on sucrose gradient centrifugation, translated into protein from each fraction in vitro and then its products were tested for HSS activity.

RESULTS: Twenty-two 500 μg total RNA was obtained from human fetal liver tissues and pooled. mRNA of 420 μg was yielded, processed by oligo (dT)-cellulose column chromatography, then was size-fractionated by ultracentrifution on a continuous sucrose density gradient (5%-25%), and separated into 18 fractions. Translated products of mRNA in fraction 8 and 9 could produce a two-fold increase in the incorporation of 3H-TdR into DNA of SMMC-7721 hepatoma cells and in a heat resistant and organ-specific way.

CONCLUSION: The partially purified HSS mRNA was obtained and this would facilitate the cloning of HSS using expression vectors.

Besides hormones such as insulin and glucagon, growth factors may be implicated in the complex regulation of a constant liver mass in the adult animal. Transforming growth factor (TGF)-α, hepatocyte growth factor (HGF) and epidermal growth factor (EGF) are important stimulators of hepatocyte proliferation, but their activities are not liver specific. On the contrary, hepatic stimulator substance (HSS) is a hepatic specific regulator found in the weanling and regenerating livers from rat, rabbit and pig[1]. We and others[2,3] have demonstrated the presence of stimulator factors in human fetal livers. Its purification and characterization have been reported[4,5]. Furthermore, we also have demonstrated that human HSS is the product of gene expression of fetal liver tissues[6]. But the sequencing of HSS so far has been unsuccessful. To facilitate cDNA cloning of human HSS, we approached the partial characterization of HSS mRNA extracted from human fetal liver tissues, with the technic of fractionation of sucrose gradient centrifugation and translation in vitro.

Preparation of poly (A) + mRNA. Total RNA was extracted from human fetal liver tissues of 4-5 month gestation by a modified procedure from Chomczynsky et al’s[7]. The extracted RNA was applied onto an oligo(dT)-cellulose column to obtain purified mRNA.

Sucrose gradient fractionation of poly(A) + mRNA. Poly (A) + mRNA was fractionated on 5%-25% sucrose gradient on SW41 rotor essentially as described by Buell GN et al[8]. Briefly, poly (A) + mRNA samples were lyophilized to remove ethanol and dissolved in 0.5 mL of TE buffer, heat-treated at 65 °C for 10 min and cooled rapidly in ice. The poly (A) + mRNA of up to 100 μg per gradient was layered directly on 5%-25% (w/v) linear sucrose gradients made in TE buffer and centrifuged in an SW41 rotor at 41000 rpm for 15 h at 20 °C. Eighteen fractions (each 1 mL) were collected and mRNA in each fraction was precipitated by ethanol.

Translation in wheat germ system. mRNA 10 mg/L was heated at 67 °C for 10 min, immediately cooled on ice and added to the cell-free protein synthesis system (Promega LTD) according to the manufacturer’s instructions. Then the wheat germ extract components were heated at 95 °C for 15 min, centrifuged at 12000 × g for 20 min and the super-natant was transferred to a 0.5 mL micro-centrifugation tube and assayed for bioactivity.

Stimulation assay of hepatocyte proliferation. Cells were counted and adjusted to 5 × 104 cell/ml, and 100 μL of cell suspensions were inoculated into the 96-well plastic plates and incubated for 6 h at 37 °C at a humidified 5% CO2 atmosphere, the medium was then replaced by a fresh one such as human partially purified HSS, translated components, culture supernatant or cytosolic fraction of transfected cos-7 cells. After 24 h of culture, 0.5 μCi of [3H] thymi-dine per well was added and incubated for 3 h, and the cells were then collected to filters, and radioactivity was determined by a liquid scintillation counter. The activity was estimated by stimulation index (SI). SI = cpm of experimental cells/cpm of control cells.

A total of 22500 μg RNA was obtained from human fetal liver tissues and pooled. Of this RNA, 22000 μg was processed by oligo(dT)ª² cellulose col-umn chromatography and 420 μg mRNA was yielded. This mRNA was then size-fractionated by ultracentrifugation on a continuous sucrose density gradient (5%-25%), and separated into 18 fractions, and the aliquots of each fraction were translated in vitro as described in the section of methods, and its products for biological activity were tested. As shown in Figure 1, the translated products of mRNA in fraction 8 and 9 could produce a two-fold increase in the incorporation of 3H-TdR into DNA of SMMC-7721 hepatoma cells. 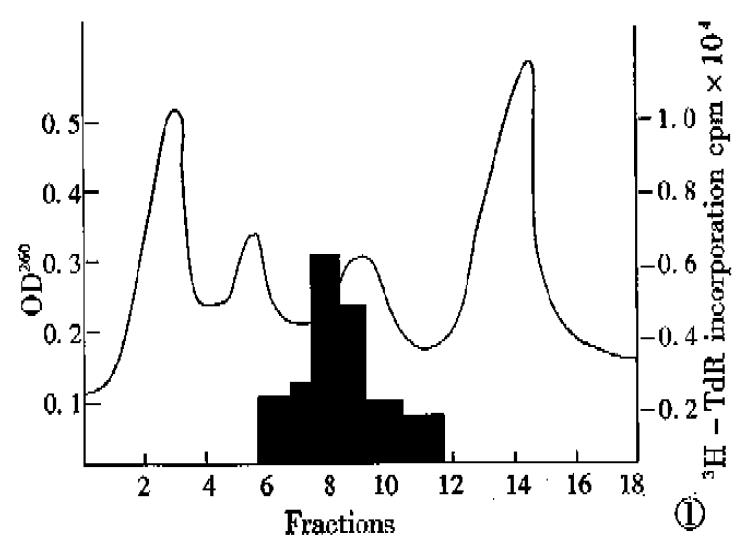 Hepatoma cells are common targets for bioassay of hepatic stimulatory activity[9]. In the present experiment, human HSS directly prepared from fetal liver cells according to the previously described method[10] produced a two-fold increase in the incorporation of 3H-TdR into DNA of SMMC-7721 hepatoma cells. Although the stimulating activity was not observed when the translated products of unfractionated mRNA was tested (Table 1), the dose-response effect of the translated products of fraction 8 and 9 mRNA (specific mRNA) on the stimulation of DNA synthesis of SMMC-7721 cell showed a positive relationship (Figure 2). The failure in detecting stimulating activity of total translated products directed by unfractionated mRNA was similar to that of our previous experiment, which might be caused by the presence of cell growth inhibitors[6]. 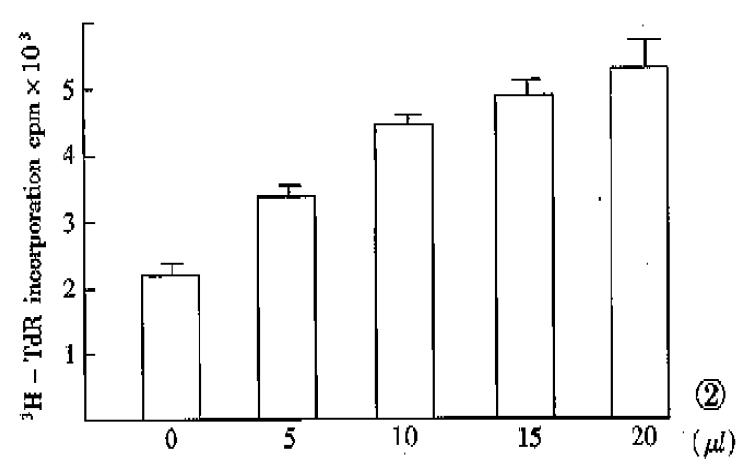 Figure 2 Dose-response effect of SMMC-7721 cells to translated product of specific mRNA. Data are presented as x-± s and based on the result of five experiments (four samples for each).

The effect of the various stimulators such as interlukin-6, fibroblast growth factor and insulin-like growth factor on the stimulation of hepatic DNA synthesis have been reported, but these stimulators could stimulate not only hepatocytes or hepatoma cells but also HL-60, K-562 cells. Unlike these stimulators, the translated products of fractionated mRNA were a liver-specific stimulator. The fact that translated stimulator of specific mRNA is resistant to heating and shows organ-specificity of action, strongly suggests that the partially purified human HSS mRNAs have been obtained. Because of the failure in amino acid sequence determination of HSS, the enrichment and fractionation of human HSS here should greatly facilitate the cloning of HSS cDNA using functional screening.

Project supported by the National Natural Science Foundation and High-Tech Program of China, No.863-102-08-51.