A 32-year-old woman complained of a mass inside the rectovaginal space for 9 years, which became enlarged within 1 year. A rectal SEL detected by endoscopy was suspected to be a gastrointestinal stromal tumor or exophytic uterine fibroid. Pathological diagnosis was difficult because of unsuccessful transabdominal core needle biopsy with insufficient tissues, as well as vaginal hemorrhage. A second biopsy was suggested after multiple disciplinary treatment discussion, which referred to a transperineal core needle biopsy (CNB) guided by ERUS combined with CEUS. Adequate samples were procured and rectal gastrointestinal stromal tumor was proved to be the pathological diagnosis. Imatinib was recommended for first-line therapy by multiple disciplinary treatment discussion. After the tumor shrunk, resection of the rectal gastrointestinal stromal tumor was performed through the posterior vaginal wall. Adjuvant therapy was applied and no recurrence or metastasis has been found by the last follow-up on December 13, 2019.

Transperineal CNB guided by ERUS and CEUS is a safe and effective preoperative biopsy of rectal SELs yet with some limitations.

Core Tip: Rectal subepithelial lesions (SELs) often manifest as bumps with a smooth surface on endoscopy. An efficient biopsy strategy is crucial to sampling for differentiation of pathological types. The transperineal core needle biopsy guided by endorectal ultrasound combined with contrast-enhanced ultrasound overcomes the limitations of previous guidance, such as sampling inadequacy, high risk of complications, and exposure to radiation. In our case, unsuccessful transabdominal biopsy led to failure of pathological diagnosis. The patient underwent this new biopsy modality then, and a diagnosis was finally made. No complications occurred. We recommend this new strategy as a promising tool for rectal SEL biopsy.

Rectal subepithelial lesions (SELs) vary in types and there have been many studies on the diagnostic value of ultrasound (US). Pelvic lipomas, gastrointestinal stromal tumors (GISTs), carcinoid tumors, leiomyomas, schwannomas, and lymphomas often originate from the anorectum[1,2]. These tumors are apt to manifest as rectal SELs on endoscopy. Traditional biopsy guidance methods include endoscopy, endoscopic US (EUS), transabdominal ultrasound, and computed tomography (CT), which have been reported with many disadvantages[1-4] to achieve successful biopsies. By application of endorectal US (ERUS) in anorectal and pelvic diseases in our daily work, we found a novel guidance method for rectal SELs biopsy, which is safer and more effective. Out of several preoperative biopsy approaches for rectal SELs, this case report focuses on transperineal core needle biopsy (CNB)[5] guided by contrast-enhanced US (CEUS) combined with ERUS. We present the following case in accordance with the CARE reporting checklist.

A 32-year-old woman was admitted to our hospital with a progressively enlarged mass in the rectovaginal space for 9 years.

The mass was found during a routine examination 9 years ago and no obvious progression was seen in following annual examinations until a year ago. The maximum diameter of the mass had significantly grown from 4.0 cm to 9.7 cm in a year, with dents in stools, which was caused by tumor compression. The patient had a submucosal protrusion demonstrated by endoscopy in a local hospital. However, no absolute tumor tissue but only inflammation was found after several times of endoscopic biopsies in the latest 2 years, which was not consistent with clinical estimation. Therefore, she came to our hospital for further diagnosis (Table 1).

The patient and family had no history of previous similar illness.

The patient’s mental status, appetite, sleep, and weight were normal without any obvious symptoms of abdominal distension, tenesmus, prolapse, diarrhea, or constipation. The anterior rectum wall was plump during digital rectal examination without tenderness or blood stain on the fingertip.

Contrast-enhanced CT (CECT) showed a mass with liquefaction necrosis (low density area) inside the rectovaginal space, with an obscure margin (Figure 1A). Transabdominal US was performed. A heterogeneous hypoechoic mass with a maximum diameter of 9.7 cm was also seen in the rectovaginal space (Figure 2A), which was suspected to be a rectal GIST or exophytic uterine fibroid. 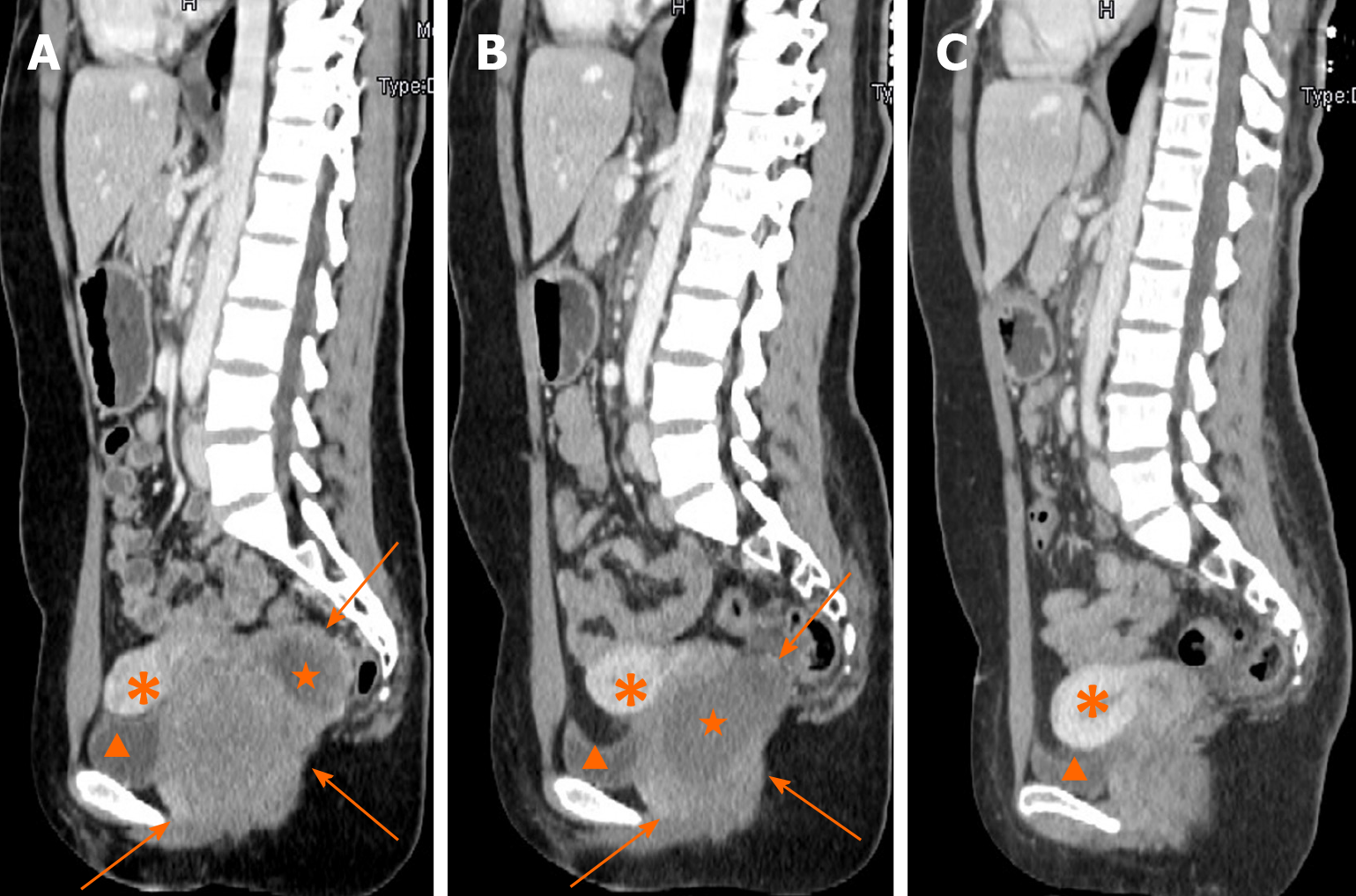 First, ERUS was performed with the MyLab Twice US system (Esaote, Genoa, Italy) equipped with a biplane endoscopic probe (TRT33, linear frequency of 4–13 MHz, convex frequency of 3-9 MHz), recording the location, size, stratification, adjacence, and echogenicity of the tumor. Then CEUS was performed with a bolus injection through the elbow vein of 2.4 mL SonoVue (Bracco, Milan, Italy) (Figure 4). Because of the heterogeneity of the tumor, it was difficult to recognize the necrotic from non-necrotic part in B mode, which can be clearly depicted by CEUS as nonenhanced vs enhanced area. As previous CECT has pointed out necrosis, CEUS was performed right before puncture to confirm the substantial part of the tumor for biopsy guidance for the second time, avoiding the failed samples inside presumptive solid area, which turned to be non-enhanced after CEUS. This guarantees the precision and efficiency of biopsy samples. 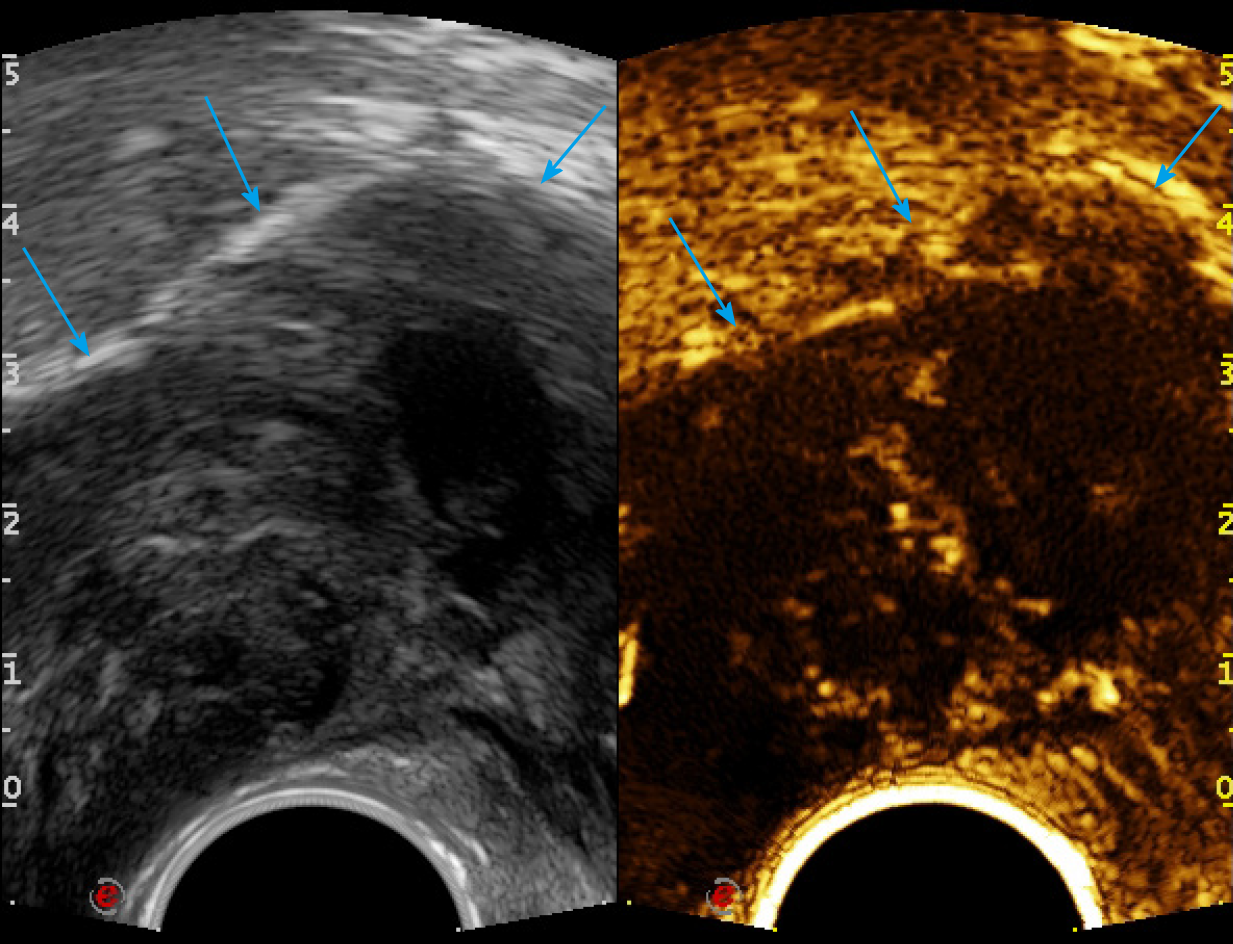 Figure 4 Endorectal ultrasound performed with the convex probe of TRT33. Liquefaction necrosis and cellular appearance were found inside the tumor in transverse sections, and the solid part of the tumor was either hypo- or iso-enhancing. Arrow: Rectal stromal tumor.

The probe was switched to linear mode. The transperineal puncture site and path were decided, and disinfection as well as drape were also completed. After local anesthesia, a freehand biopsy of the lesion was performed with the guidance of in-plane needle. The needle tip and its movements were continuously monitored in real time by ERUS during the whole puncture procedure[6] to procure the tissue of lesion from enhanced area of the tumor on CEUS (Figure 5). Several strips of greyish tissue were obtained with a length of 0.3-1.2 cm (Figure 3B and C). No complications occurred.

According to the post-operation immunohistochemical (IHC) staining, CD117, Dog-1, CD34, and succinate dehydrogenase B subunit were positive, and spinal muscular atrophy, Des, and S-100 were negative. The proliferation index of Ki-67 was 2%. The diagnosis was finally settled as GIST with post-therapeutic reaction (Figure 6). 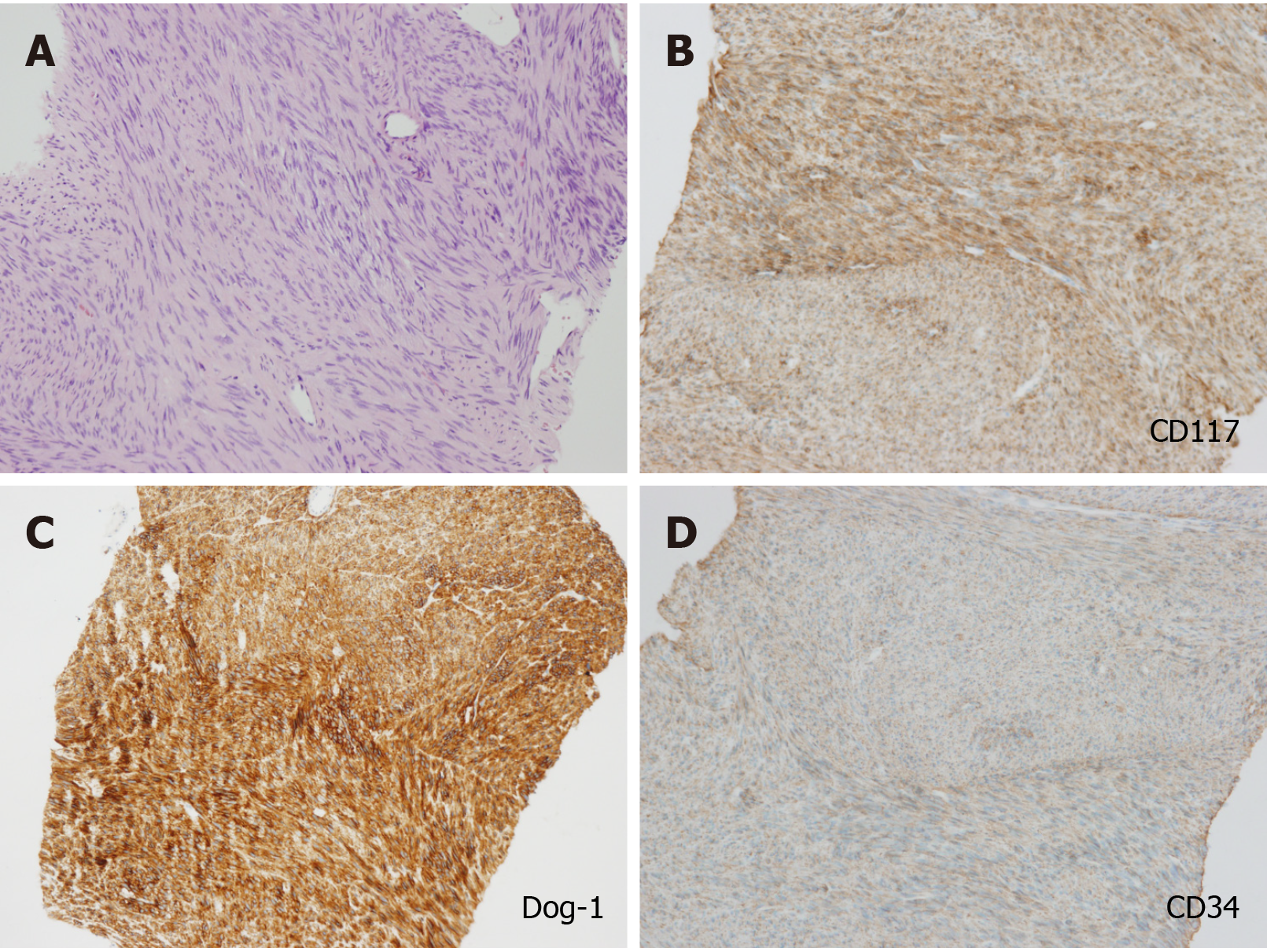 After the second MDT discussion, imatinib (Gleevec; Novartis, Basel, Switzerland) was decided as first-line therapy. It was suggested to wait for the treatment reaction before making a further therapeutic schedule. After 5 mo, CECT showed that the tumor had significantly shrunk (Figure 1B). The patient underwent complete GIST resection through the posterior vaginal wall. During the surgery, the tumor was found to originate from the rectal muscular layer, close to the posterior vaginal wall, with a smooth capsule, 5.5 cm in maximum diameter. It was greyish white on the cut surface with an interlaced appearance. The postoperative pathology findings were as follows: A suspected spindle cell tumor, interstitial and fibrous tissue proliferation, focal glassy degeneration area accompanied by a few lymphocyte reactions, remote hemorrhage with hemosiderin deposition, and a negative surgical margin.

Fifteen months after resection, CECT of the pelvic cavity on October 26, 2019 (Figure 1C) indicated no obvious sign of tumor recurrence. No recurrence or metastasis has been found either by the last follow-up in December 13, 2019.

GISTs are nondirectional differentiated mesenchymal neoplasms that arise anywhere along the digestive tract with an incidence of 3% in the rectum[7]. Approximately 25% of GISTs were found accidently during surgery or by imaging and about 5% at autopsy[8].

Rectal GISTs are often concealed, accompanied by long disease duration, thus symptoms often appear in the late phase of the disease. Common imaging findings include a well-circumscribed tumor with nonannular and exophytic growth pattern, without causing perirectal lymphadenopathy or bowel obstruction in most cases[9]. Rectal GISTs are of increasing concern because of the rare site and post-treatment implications for lifestyle. Targeted therapy has been successful compared with conventional chemotherapy and radiotherapy. Surgery is still the main approach to cure GISTs[10,11]. Preoperative diagnosis is crucial for GISTs, because they differ from other rectal SELs in treatment and prognosis.

GISTs have malignant potential and treatment depends on accurate pathological diagnosis by IHC staining, which requires adequate tissue samples. Endoscopic biopsy only samples mucosal tissue, yet rectal GISTs often present as submucosal growths, which forms a barrier for endoscopic biopsy. EUS-guided fine needle aspiration (EUS-FNA) is considered for preoperative diagnosis of submucosal lesions. In our case, the results of several times of EUS-FNA from the local hospital were negative. Inadequate tissue samples were mentioned by Yegin and Duman[1] in approximately one third of cases. A multicenter retrospective study[3] of EUS-FNA of suspected GISTs gave cytopathological yield, IHC yield, and diagnostic yield of 46%, 41%, and 37%, respectively. In addition, EUS-FNA has been limited in its inability to procure intact and adequate samples that are vital for histopathological and IHC analysis, causing difficulties in pathological diagnosis of GISTs[2,4]. EUS-guided fine needle biopsy (EUS-FNB) is still the commonest biopsy mode for GISTs. However, it requires adequate preoperative bowel preparation, and the risks of infection and hemafecia are higher in transrectal approach than in transperineal approach[12,13]. Also, the technique of EUS-FNB is more difficult, and it requires complex instruments, leading to unavailability in primary hospital.

We performed CNB guided by transabdominal US at first. Post-urination procedure was taken in order to avoid bladder injuries. Compression of the pelvic cavity by the probe was made to protect the surrounding bowel. The needle still went through the vagina and caused vaginal hemorrhage. Eventually, we were not able to obtain a pathological diagnosis because of the conflict between high risk of complications and inadequate sampling.

Then we performed transperineal freehand biopsy under the guidance of ERUS and CEUS, and it succeeded. We consider that ERUS guided transperineal biopsy is a reliable and safe method for preoperative pathological diagnosis of rectal SELs. And CEUS does help in the location of sampling. This method possesses advantages of both high resolution and low risk of infection[14], allowing acquirement of adequate tissue through a short puncture path. And it can be carried out under local anesthesia in outpatient department, with a lower cost of time and money[12]. The needle does not go through the rectal wall, so there is no need for bowel preparation. This method also reduces the application of antibiotics due to a low risk of infection[15].

For patients manifesting as rectal SELs and suspected tumors, to obtain preoperative diagnosis is difficult. ERUS guided transperineal biopsy can be one of the supplementary methods to routine biopsy work-up, especially for the difficult cases after several times of failure for insufficient sampling and risk of puncture complications. In addition, freehand biopsy is more suitable for underdeveloped areas because it does not need needle guide kit and costs less.

Transperineal CNB guided by ERUS ensures adequate samples with a shorter puncture path, avoiding injuries to the bladder, bowel, uterus, vagina, and prostate. It also protects patients from infection caused by transrectal puncture. CEUS of the lesion can make it clear which points are the most appropriate for sampling. Transperineal CNB guided by CEUS combined with ERUS could be a supplement to traditional biopsy guidance method and it has the potential to be an important tool for preoperative biopsy of rectal SEL. The application could be limited by anorectal stenosis or with high-position lesions.