Gastric cancer (GC) is one of the most frequently diagnosed gastrointestinal cancers throughout the world. Novel prognostic biomarkers are required to predict the prognosis of GC.

Transcriptome data and clinical data were downloaded from The Cancer Genome Atlas. COX and least absolute shrinkage and selection operator regression analyses were performed to screen for prognosis associated lncRNAs. Receiver operating characteristic curve and Kaplan-Meier survival analyses were applied to evaluate the effectiveness of the model.

The prediction model was established based on the expression of AC007991.4, AC079385.3, and AL109615.2 Based on the model, GC patients were divided into “high risk” and “low risk” groups to compare the differences in survival. The model was re-evaluated with the clinical data of our center.

The 3-lncRNA combination model is an independent prognostic factor for GC.

Core Tip: A model to predict survival of patients with gastric cancer was developed and validated by RNA sequencing and real-time reverse transcription-polymerase chain reaction assays. The model had an excellent performance: The areas under the curves for 3-year and 5-year survival were 0.78 and 0.75, respectively. The C-index was 0.72 (se = 0.022, 95% confidence interval: 0.67-0.76). The model contributed as a poor independent prognostic factor both in disease free survival and overall survival.

Gastric cancer (GC), the fourth most frequently diagnosed malignant tumor, has the second highest cancer-related mortality rate worldwide, with high morbidity in Asia[1]. Moreover, GC is still the second most prevalent cancer in China[2]. Most patients are diagnosed at the advanced stage and are prone to chemoresistance and recurrence. It leads to an overall 5-year overall survival rate of less than 25%[3]. Therefore, developing a novel and reliable prognostic stratification system that could be applied to clinical risk assessment would be of great significance for the treatment and follow-up of GC patients.

Long noncoding RNAs (lncRNAs) have limited protein-coding ability, exceeding 200 nucleotides in length[4]. Emerging evidence indicates that lncRNAs are involved in tumor initiation and progression through gene expression regulation from epigenetic to post-transcriptional levels[5-7]. Not surprisingly, some studies have shed light on the role of lncRNAs in GC. GClnc1 spurred tumorigenesis and metastasis by recruiting the WDR5/KAT2A complex as a “scaffold” in GC[8]. HOXC-AS3 could be regulated by abnormal histone modification and functioned as an essential element in GC proliferation and migration[9]. Therefore, the abnormal expression of lncRNAs may indirectly reflect the occurrence and development of GC. As genes do not usually act alone, it is necessary to select suitable lncRNAs and establish a multi-lncRNA prediction model, which may play a pivotal role in evaluating the prognosis of GC.

In the present research, we analyzed the expression of lncRNAs associated with GC patients’ survival in The Cancer Genome Atlas (TCGA). We aimed to develop and validate a useful muti-lncRNA combination prediction model that might be useful in helping predict GC survival by performing COX regression and the least absolute shrinkage and selection operator (LASSO)[10].

RNA sequencing and matching medical data were acquired from TCGA (https://portal.gdc.cancer.gov/). Raw data were obtained through the “RTCGA Toolbox package” (R platform). Overall, 407 samples, including 375 GC and 32 normal tissues, were analyzed. The expression of lncRNAs was acquired from Illumina HiSeq-RNASeq platforms. Moreover, the clinical data of GC patients were also downloaded. R was utilized to evaluate findings.

As time-dependent survival receiver operating characteristic (ROC) curve is an essential measure of the predictive power of a prognostic model, we used the R package “survival ROC” to assess the role of lncRNA combination prediction model in predicting 5- and 3-year survival. Kaplan-Meier survival analysis was performed to explore correlations between the lncRNA combination model and the overall survival (OS). This study was carried out according to the flow chart (Figure 1A). 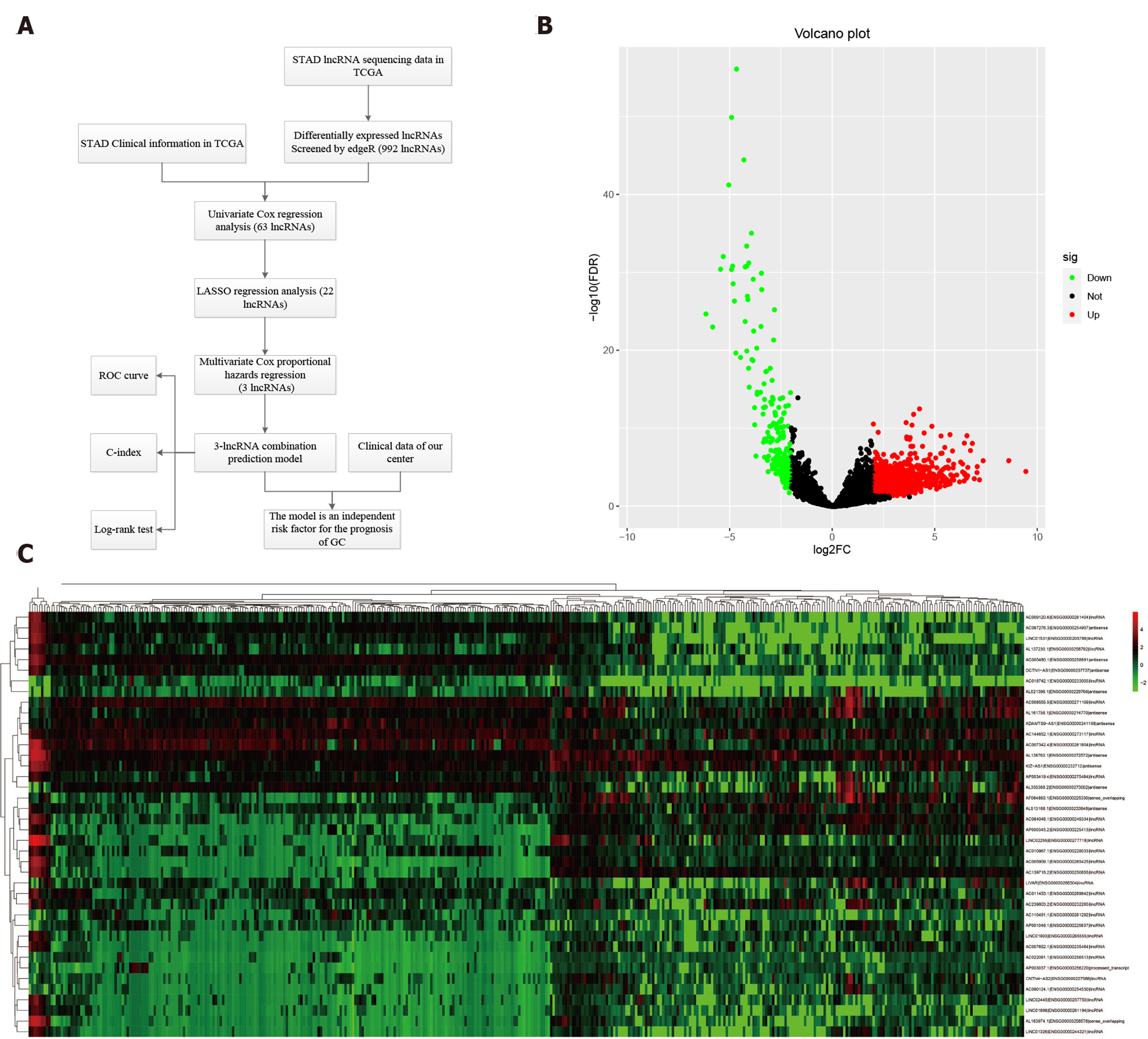 Overall, 200 GC and non-tumorous adjacent tissues were acquired from people undergoing surgery at the Liaoning Province Cancer Hospital and Institute from 2012 and 2014. Individuals were asked to sign an informed consent form before the operation. The hospital’s Ethics Committee approved the study. No preoperative chemotherapy or radiotherapy was performed on enrolled patients. Gastrectomy and D2 lymph node dissection were applied to all patients. Total RNA was extracted from patient tissue samples. Tumor staging was based on the tumor-node-metastasis (TNM) staging system (8th edition). One hundred and forty-two men and 58 women were enrolled in this study; their average age was 65 years (range, 42-78 years). Postoperative adjuvant chemotherapy was applied to stage IIA and above disease. Table 1 shows the clinicopathological parameters of the patients. Follow-up was the same as that in previous studies[9], and the follow-up deadline is December 31, 2019.

Prognostic model based on expression levels of 3-lncRNA combination

Sixty-three lncRNAs were associated with the survival of GC by univariate COX regression analysis (Supplementary Table 2). The lncRNA-seq expression profile of the 63 lncRNAs and the clinical data were extracted for LASSO regression (Figure 2A). As a result of the LASSO penalized uni-Cox model, 22 lncRNAs were finally identified (Figure 2B) and incorporated into the multivariate COX model to identify independent prognostic factors associated with survival. As a result of LASSO and COX model, AC007991.4 (ENSG00000254287, antisense), AC079385.3 (ENSG00000257918, antisense), and AL109615.2 (ENSG00000231881, lincRNA) were finally identified (Figure 2C and D). 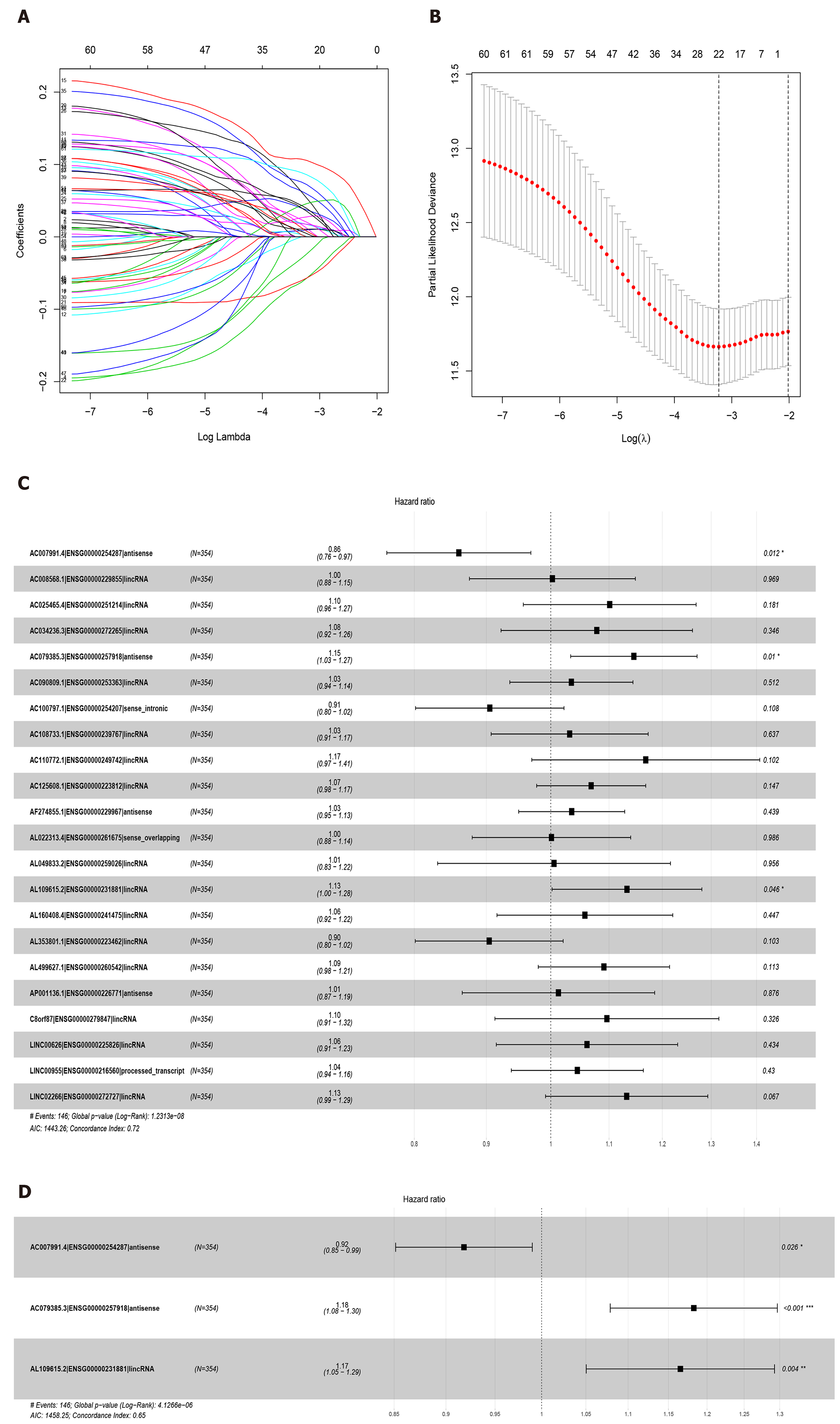 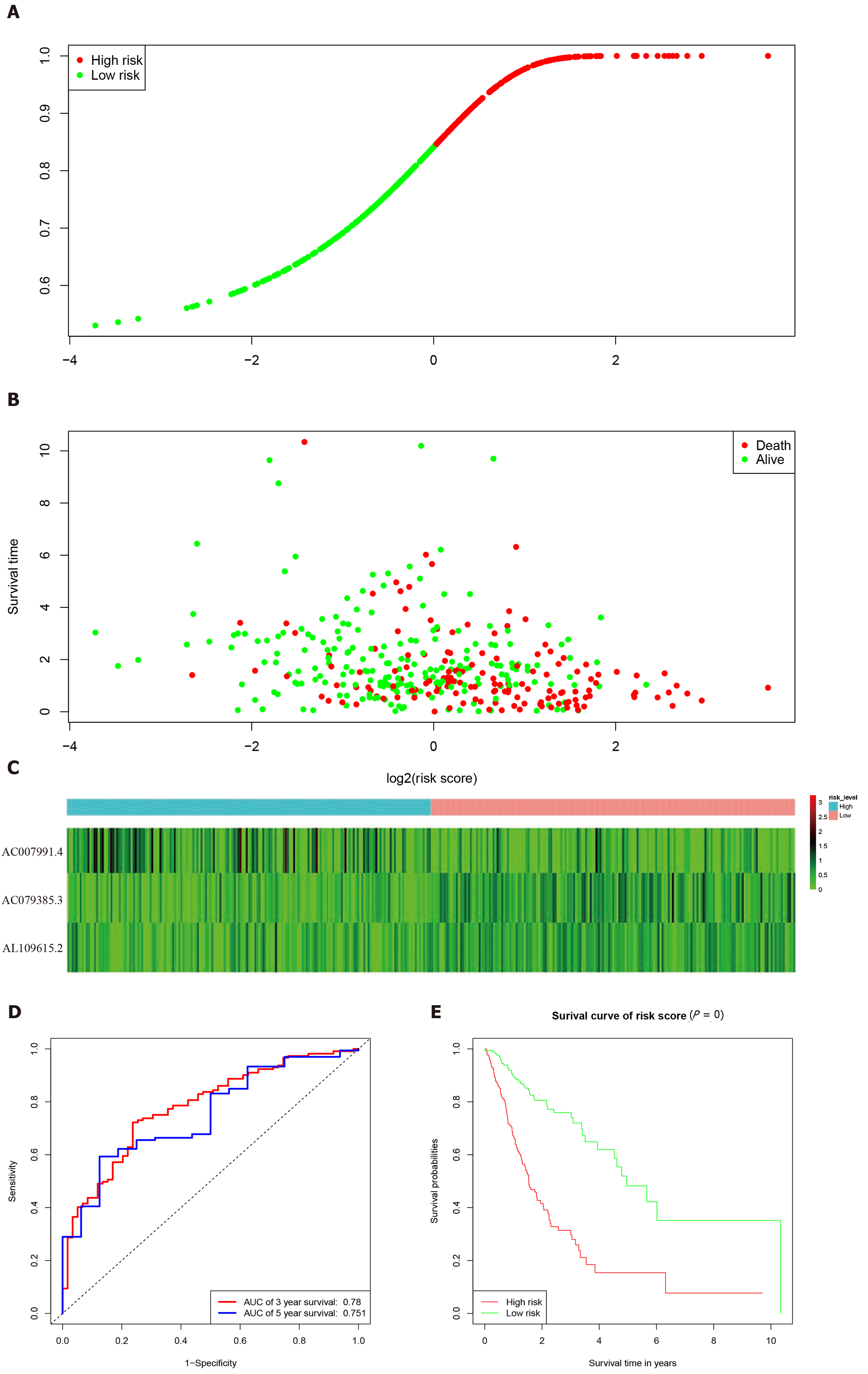 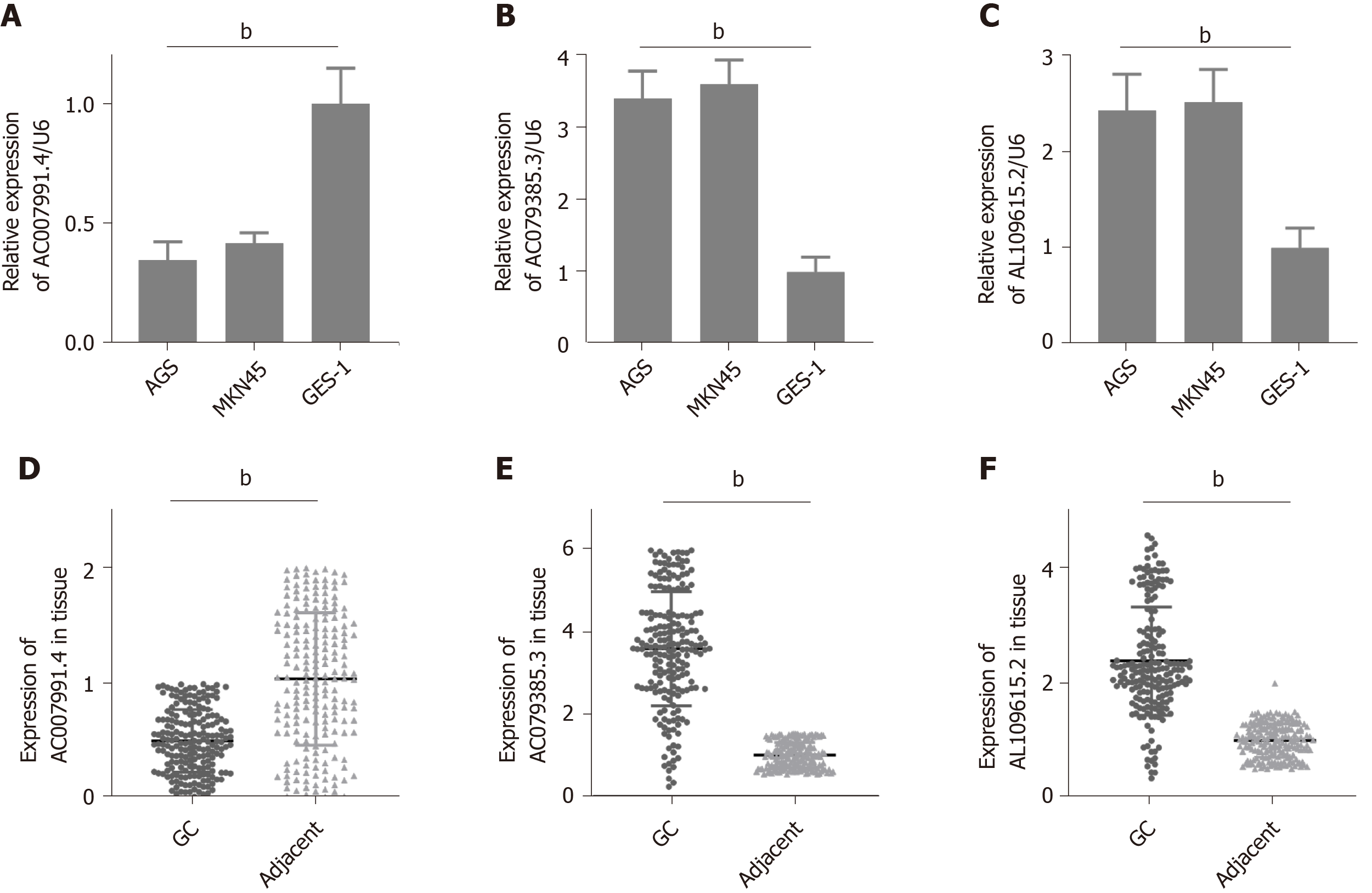 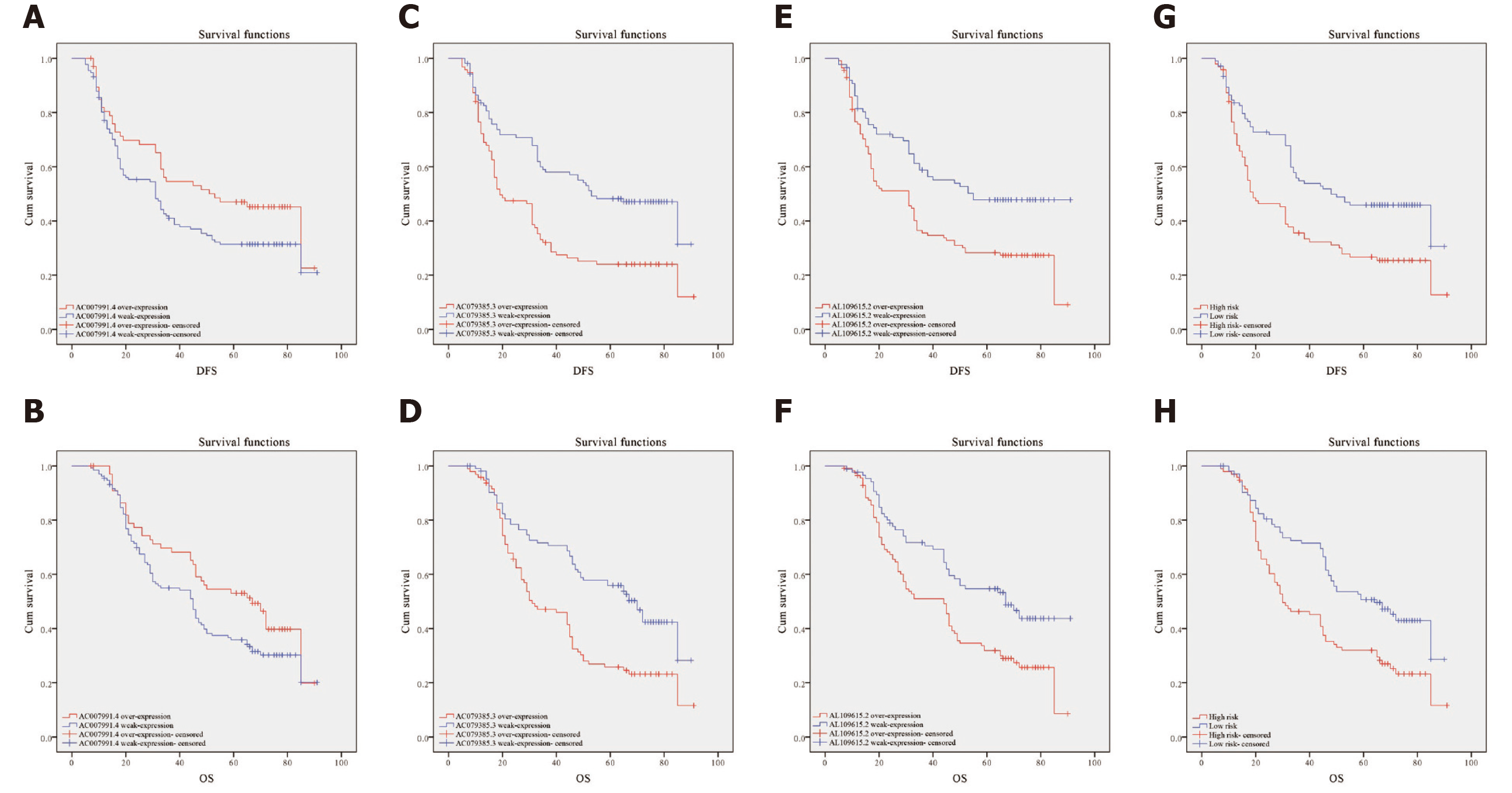 LncRNAs are a class of molecules with functional relevance for gene expression regulation and have been discovered recently. With the expansion of research on lncRNA function, growing evidence demonstrates that a series of lncRNAs are aberrantly expressed in cancer and involved in cancer progression regulation. Moreover, they have increasingly complex functions. As “scaffolds”, they stimulate the interaction between proteins. As “guides”, lncRNAs enable the mixing of protein and genes[13]. As “enhancers”, lncRNAs control transcription of nearby genes. As “decoys”, lncRNAs are bound to microRNAs or proteins[14,15].

Because of the critical regulatory role of lncRNAs in tumorigenesis and development, more and more lncRNAs have been recognized as biomarkers for GC treatment and progenies[12,16]. MAFG-AS1 promoted GC cell proliferation and invasion and might be a valuable prognostic biomarker[16]. LncRNA pcsk2-2:1 could be parceled into serum exosome and acted as a diagnostic biomarker for GC[17]. Fattahi et al[18] summarized the role of famous lncRNAs such as H19, HOTAIR, UCA1, and PVT1 as molecular markers in GC. However, these studies only discussed the predictive value of a single biomarker, which may not be sufficient to predict the prognosis of GC. In the present study, clinical data and RNA-seq data of GC patients were obtained from TCGA as a training set. The patients’ data of our center served as the verification set. P < 0.01 and |logFC| ≥ 2 were used as the cutoff points to obtain the DELs. To improve the regression model’s prediction accuracy, LASSO and COX regression analyses were applied to examine the correlation between the expression of lncRNAs and GC patients’ survival. Compared with previous studies[17], this method is the first to study GC related lncRNA markers; it effectively minimizes the overfitting caused by univariate COX regression[19,20]. LASSO is a kind of regression analysis introduced in statistics and machine learning[21,22]. Compared with the traditional model, LASSO improves the prediction accuracy and interpretability through variable selection and regularization. The LASSO regression evaluation process includes relationship to ridge regression, best subset selection, the connections between lasso coefficient estimates, and soft thresholding[23,24].

Then, we got a 3-lncRNA combination prediction model: AC007991.4, AC079385.3, and AL109615.2. They were all potential prognostic independent risk factors for GC. According to the expression levels of the 3-lncRNA combination, all samples were divided into a high-risk group and low-risk group. This model could predict patients’ poor prognosis in the high expression group in both the training and validation sets. Subsequently, we verified the expression of these three lncRNAs in GC tissues and cells. AC007991.4 was weakly expressed in GC. However, both AC079385.3 and AL109615.2 were potential onco-lncRNAs.

Moreover, it was confirmed by the verification set that the prediction model was an independent risk factor for the prognosis of GC. Besides, it was positively correlated with Bormann type and TNM stage in GC. It is also worth pointing out that AC079385.3 was a prognostic risk factor for GC in both the training and validation sets, suggesting that it might play a pivotal role in the model. Its molecular biological function and position in the development of GC require further study.

Gastric cancer (GC) is one of the most frequently diagnosed gastrointestinal cancers throughout the world. It is necessary to identify a multi-long noncoding RNA (lncRNA) prognostic model for GC.

Abnormal expression of lncRNAs may indirectly reflect the occurrence and development of GC. As genes do not usually act alone, it is necessary to select suitable lncRNAs and establish a multi-lncRNA prediction model.

To construct a multi-lncRNA combination model to predict the prognosis of gastric cancer patients.

The RNA-seq dataset and clinical dataset of GC in The Cancer Genome Atlas were used in this study. The least absolute shrinkage and selection operator and COX models were used to identify meaningful modules and hub genes. Clinical data of 200 patients were used to evaluate the clinical significance of the multi-lncRNA combination model via survival analysis.

We found a 3-lncRNA combination prediction model: AC007991.4, AC079385.3, and AL109615.2. It could effectively predict the prognosis of GC. AC079385.3 was found to be a prognostic risk factor for GC, and it may play an important role in the development of GC. Least absolute shrinkage and selection operator improved prediction accuracy and interpretability through variable selection and regularization.

Clinicians can obtain the expression levels of AC007991.4, AC079385.3, and AL109615.2 in tissue samples by real-time reverse transcription-polymerase chain reaction and calculate the corresponding risk values.