To investigate the value of ultrasound elastography combined with serological indexes in diagnosing liver fibrosis and assessing its severity.

A total of 338 CHB patients were randomly enrolled in our hospital from January 2015 to June 2017. Among these patients, 200 patients were male and 138 patients were female. Inclusion criteria: (1) Patients who underwent liver biopsy; and (2) patients who received ultrasound elastography and serological detection before the biopsy. Exclusion criteria: (1) Patients combined with other types of liver disease; (2) patients with severe heart, liver and kidney insufficiency, coma, or puncture site infection; and (3) patients associated with liver cancer, immune system disease, or active bleeding and other diseases. These patients were divided into two groups according to the presence of hepatic fibrosis via biopsy: disease group (patients with hepatic fibrosis) and control group (subjects without hepatic fibrosis). The disease group was further divided into four subgroups, according to the degree of fibrosis: S1, S2, S3 and S4. All patients or their families provided a signed informed consent. The present study met the requirements of the hospital ethics committee and received their approval.

Detection of hepatitis B hepatic fibrosis via acoustic radiation force impulse: The acoustic radiation force impulse (ARFI) test was performed using an ACOUSON S2000 Color Ultrasound Scanner (Siemens). (1) The patient underwent fasting and was placed in the left lateral decubitus position, with the right-hand on the head. Then, the right hepatic tissue of the liver was detected; (2) the elastic sampling frame was placed perpendicular to the liver surface, and then placed in the liver parenchyma at approximately 4 cm away from the probe surface in order to avoid the surrounding blood vessels. The patient was instructed to hold their breath; and (3) the update key was pressed, a high-intensity low-frequency pulse wave was launched, the transverse shear wave velocity (SWV) was received in m/s, and the value was recorded. The measurement was repeated three times, and the SWV value was taken as the SWV value of the liver parenchyma. 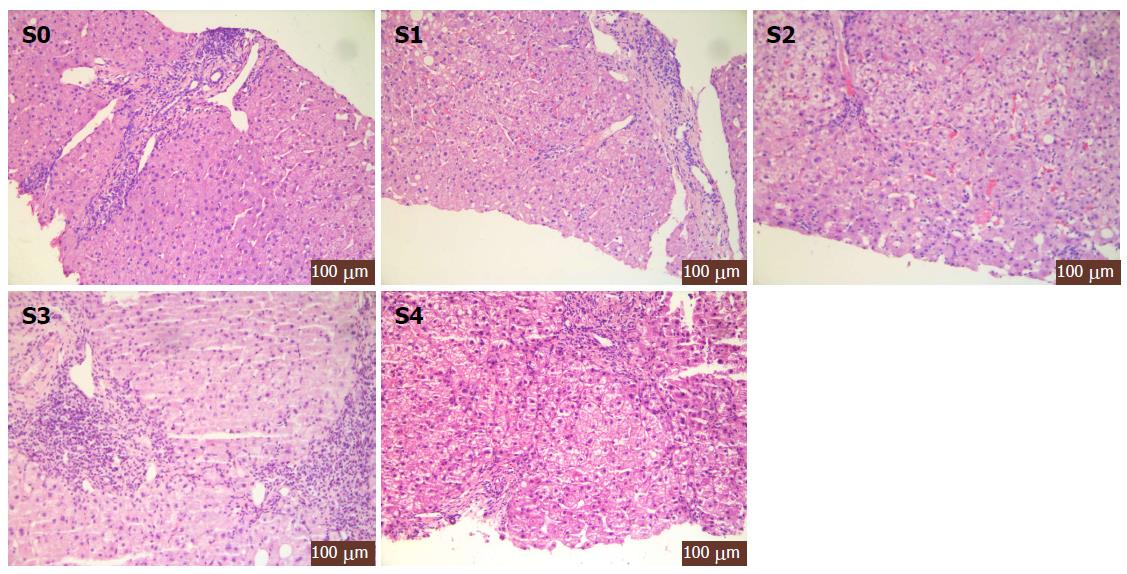 Statistical analysis was performed using SPSS 19.0 and MedCalc software. Measurement data were expressed as mean ± SD. The t-test was used for comparisons between the two groups. The rate of adoption of count data was expressed using a Chi-square test to compare the two groups. Independent risk factors of fibrotic liver were analyzed by multivariate logistic regression analysis, while ROC curve analysis was conducted to determine the accuracy in the diagnosis of hepatic fibrosis. Spearman correlation analysis was used to compare the degree of hepatic fibrosis with serological markers and elastography. Multiple linear regression was used to establish a hepatic fibrosis assessment model and determine its degree of fit. P < 0.05 was considered statistically significant. 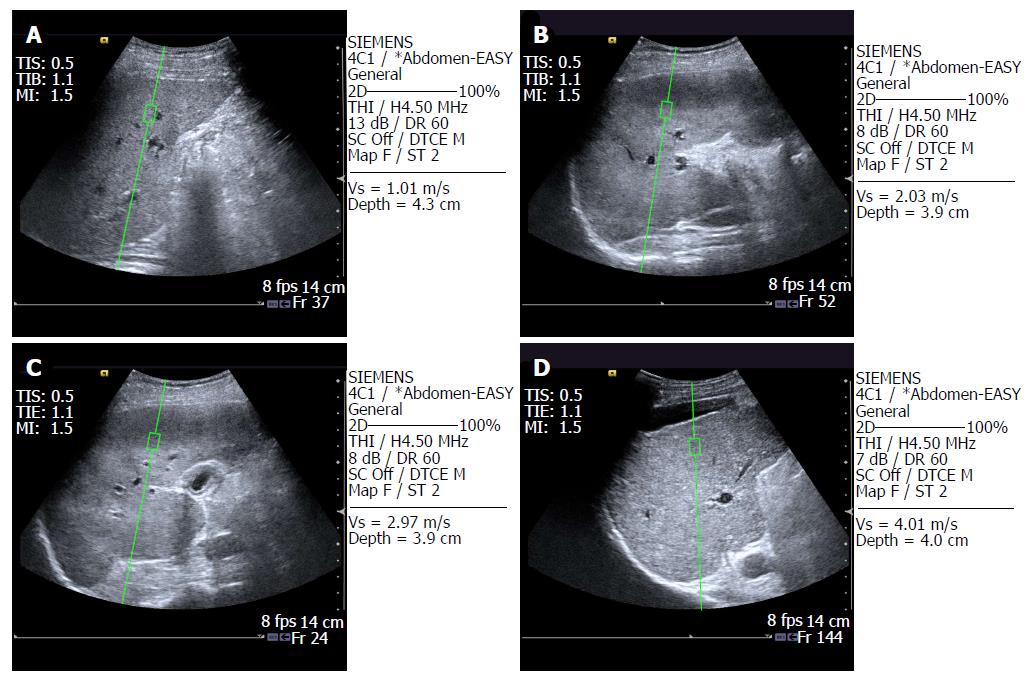 Indicators with significant differences (SWV, AST/ALT, HA, CIV, APRI and FIB-4) were used as independent variables. The occurrence of fibrosis was a dependent variable, and a multivariate logistic regression analysis was conducted. These results revealed that SWV, HA, CIV and APRI had a significant effect on hepatic fibrosis (P < 0.05). According to the OR value, the sequence was SWV, HA, APRI and CIV (Table 2).

The ROC curve for the diagnosis of hepatic fibrosis by each index is illustrated in Figure 3. The area under the curve (AUC) for hepatic fibrosis diagnosed by SWV was the highest (0.873), followed by HA (0.848). The remaining AUC rankings were as follows: AST/ALT, APRI, FIB-4, and CIV (Figure 3). The combined diagnosis of SWV and HA with the highest AUC indicated that diagnostic accuracy was further improved with an AUC of 0.889 (sensitivity: 95.92% and specificity: 72.04%) (Table 3 and Figure 4). 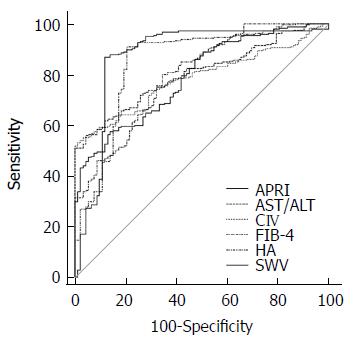 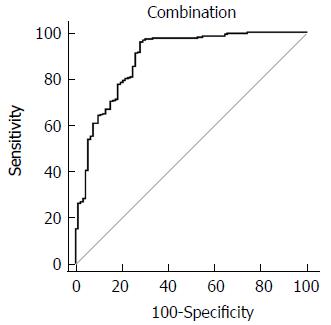 Figure 4 Receiver operating characteristic curve for the diagnosis of hepatic fibrosis based on different combined indicators.
Association of serological markers with elastography and hepatic fibrosis

The present study first analyzed the clinical data of these two groups. The results revealed that SWV, AST/ALT, HA, CIV, APRI and FIB-4 were significantly greater in the disease group than in the control group. This suggests that SWV, AST/ALT, HA, CIV, APRI and FIB-4 are the six indicators that can help in the clinical screening for patients with hepatic fibrosis, which is consistent with previous studies[45-50]. Subsequently, in the present study, a multivariate logistic regression analysis was performed on these indicators, which showed significant differences. These results revealed that SWV, HA, CIV and APRI had a significant effect on the development of hepatic fibrosis, suggesting that clinical attention should be given to patients with high levels of SWV, HA, CIV and APRI. In order to further explore the clinical significance of these indicators, an ROC curve analysis was performed. Among these four indicators, the maximum area under the ROC curve for SWV was 0.873, suggesting that SWV may be used as an ideal indicator for hepatic fibrosis screening. After these indicators were combined, it was noted that the accuracy of the diagnosis was further enhanced, suggesting that the clinical accuracy of hepatic fibrosis can be improved by combining SWV with serological indexes.

In summary, SWV can improve the accuracy of hepatic fibrosis diagnosis, and overcomes the invasive and poor reproducibility shortcomings associated with liver biopsy. At the same time, SWV in combination with serological indexes can further help in the clinical assessment of the extent of hepatic fibrosis in patients.

This study enrolled patients with chronic hepatitis B (CHB) as the research subjects. The aim of this study is to analyze serum markers and ultrasound elastography indicators for diagnosing liver fibrosis and liver fibrosis grading based on pathological results.

According to the results of liver biopsy, 338 patients with CHB admitted to our hospital were divided into a diseased group and control group. The diseased group continued to be divided into four groups according to the degree of fibrosis. General data, shear wave velocity (SWV), and serological markers were compared between the two groups. Further independent risk factors for liver fibrosis in patients were analyzed by logistic regression. The accuracy of different indicators in diagnosing liver fibrosis was compared by receiver operating characteristic (ROC) curves. The correlation between different fiber levels and serum indicators or elastography indicators was analyzed. Finally, a multivariate linear regression was used to establish a mathematical model for assessing the severity of liver fibrosis with elastography combined with serological markers.

SWV, aspartate aminotransferase (AST)/alanine aminotransferase (ALT), hyaluronic acid (HA), type-IV collagen (CIV), aspartate aminotransferase-to-platelet ratio index (APRI) and fibrosis index based on the 4 factor (FIB-4) were significantly higher in the disease group than in the control group (P < 0.05). The multivariate logistic regression analysis results revealed that SWV, HA, CIV and APRI significantly affected the occurrence of hepatic fibrosis. The ROC curve revealed that the accuracy of the diagnosis of hepatic fibrosis for SWV and HA were 87.3% and 84.8%, respectively. The accuracy of SWV combined with HA was 88.9%. Spearman correlation analysis revealed that hepatic fibrosis was positively correlated with SWV, AST/ALT, HA, CIV, APRI and FIB-4 levels. The R values were 0.767, 0.684, 0.711, 0.681, 0.634 and 0.702, respectively, and the difference was statistically significant (all P < 0.05). The multiple linear regression analysis revealed that SWV, AST/ALT, HA, CIV, APRI and FIB-4 were screened as statistically significant independent factors. The established model was: fibrosis level = -4.046 + 1.024 × SWV + 1.170 × AST/ALT + 0.011 × HA + 0.020 × CIV + 0.719 × APRI + 0.379 × FIB-4.

This study is a single-center study, and the sample size is limited and insufficient to fully guarantee the reliability of the study. Therefore, the equation we established cannot be used as an accurate tool for clinical prediction of lymph node metastasis, but it is worthy of further clinical validation and promotion. In addition, for serological indicators that can reflect the degree of liver fibrosis, we can further consult the literature to explore the mechanism of the degree of fibrosis. This would help us understand the diagnostic significance of serological markers with respect to the degree of liver fibrosis.