To evaluate the correlation between intravoxel incoherent motion (IVIM) diffusion-weighted imaging (DWI) parameters and the degree of hepatic steatosis and fibrosis in children.

Liver disease in the pediatric population is not uncommon. Metabolic disease and diverse syndromic conditions commonly affect the liver to varying degrees. Nonalcoholic fatty liver disease (NAFLD) is an important disease entity because it could lead to hepatic steatosis and fibrosis[1]. In addition, the incidence of NAFLD is increasing dramatically in adolescents and in children[1]. Biliary atresia (BA) or neonatal hepatitis also can affect the liver in early childhood, and BA is the most common cause of hepatic fibrosis and reason for liver transplantation in young children[2,3]. Therefore, quantitative and non-invasive characterization of the liver conditions is important in pediatric patients. Biopsy has a limited role in children due to its sampling bias and invasive nature[4]. The intravoxel incoherent motion (IVIM) magnetic resonance imaging (MRI) technique could be one of the alternative methods for assessing hepatic tissue perfusion and diffusion separately in various pediatric liver diseases.

The IVIM technique separates the slow and fast diffusion components of diffusion-weighted imaging (DWI)[5]. The slow component is related to free water diffusion, and the fast component is related to microvascular perfusion[5]. Although the conventional apparent diffusion coefficient (ADC) is influenced by both slow and fast components, IVIM could quantify the two components separately by using multiple b-values[6]. It is because perfusion property has fast diffusion rate while using low b-values, but pure water molecular diffusion has slow diffusion rate while using high number of b-values[6]. Three parameters can be obtained from the IVIM technique: (1) Pure molecular diffusion (D, D slow), which is related to the slow component of diffusion from water; (2) pseudo-diffusion (D*, D fast), which reflects the endovascular blood flow velocity; and (3) perfusion fraction (f), which reflects blood volume[5]. Among them, D* and f are related to blood perfusion.

Many studies have utilized IVIM for the evaluation of liver disease in adults. They demonstrated the better performance of IVIM compared to DWI for staging hepatic steatosis and fibrosis, and fibrosis had different effects on the IVIM parameters[7-9]. However, limited studies included children for assessing liver disease using IVIM. One study included patients 10 years of age or older to evaluate diminished liver microperfusion after Fontan operation[10]. Another study included patients 11 years of age or older to assess the correlations between hepatic steatosis and IVIM perfusion parameters[11]. In the most recent study, Manning et al[12] evaluated D, f, and ADC values derived from three b-values for assessing NAFLD in children. However, there has been no study focused on pediatric livers with enough b-values for IVIM.

Therefore, the purpose of this study was to evaluate the correlation between IVIM DWI parameters and the degree of hepatic steatosis and fibrosis measured with MRI in children.

Our institutional review board approved this retrospective study, and informed consent was waived. Children under the age of 18 years who underwent liver MRI with IVIM DWI from February 2013 to November 2016 were included. There were only two clinical indications: Patients with clinical suspicion of hepatic steatosis or those who were suspected to have hepatic fibrosis after undergoing Kasai operation due to BA. The exclusion criteria were: (1) Subjects who had no laboratory results of aspartate aminotransferase (AST) or alanine aminotransferase (ALT) level within one month of the MRI examination and (2) those who had focal lesions other than fat or fibrosis in the liver, such as hemangioma or cysts on MRI.

Subjects were divided into three groups. One was the normal group, for those who had normal MR proton density fat fraction (PDFF) of the liver (< 6% according to a previous study)[13], normal body mass index, and normal transient elastography (TE) results when they had TE results within one year of MRI examinations. The second was the fatty liver (FAT) group, for subjects who had PDFF greater than 6%. The third was the fibrotic liver (FIB) group, for children who underwent MRI after a Kasai operation due to BA. The age, gender, weight (kg), and height (cm) of the children were assessed at the time of MRI examination.

Each liver MRI was obtained in a 3T system (Discovery 750w, GE Healthcare, Milwaukee, WI, United States). MRI was composed of four sequences including axial single shot fast spine echo (SSFSE) T2 weighted images, 3D volumetric multi-echo gradient sequence (IDEAL-IQ, for proton density fat quantification and T2* decay assessment), MR elastography (MRE), and IVIM DWI. The detailed MR parameters are presented in Table 1. For MRE, a passive pneumatic driver was placed over the liver and was connected to the active driver[14]. The driver power was reduced 20% from the adult level, and a folded towel was placed between the driver and abdominal wall to avoid abdominal discomfort[15,16].

In the SSFSE T2 weighted images, liver morphology and focal lesions were assessed. Round regions-of-interest (ROIs) were drawn in the homogenous parenchyma of the right hepatic lobe, avoiding hepatic vessels, by one experienced radiologist in all quantitative imaging sequences. Four ROIs were drawn in the liver parenchyma in each slice, and the mean values were considered as representative values in each sequence, including D (× 10-3 mm2/s), D* (× 10-3 mm2/s), f (%), and ADC (× 10-3 mm2/s) value maps (Figure 1). 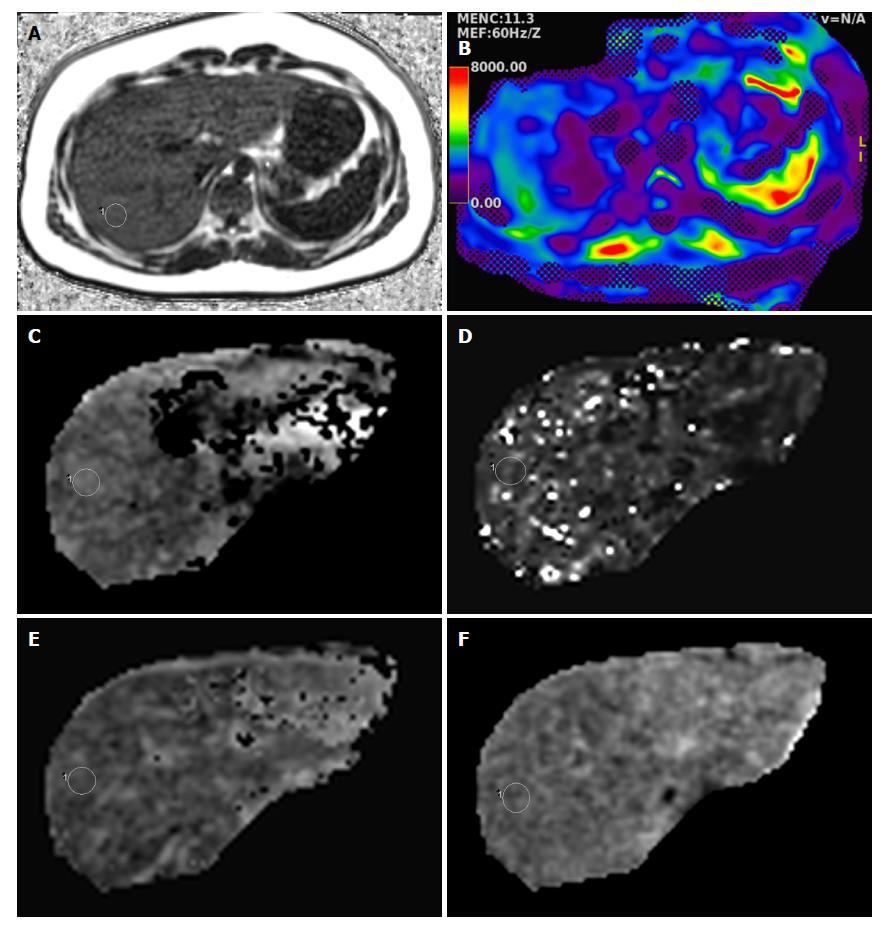 Statistical analyses were performed using SPSS version 23 (IBM Corp., Armonk, NY, United States). Clinical findings and MRI values were compared between normal, FAT and FIB groups using Kruskal-Wallis test or Fisher’s exact test, with the use of Dunn’s method for multiple comparisons. We also performed linear regression analysis to determine whether the liver function tests, PDFF, and MRE values influenced the IVIM parameters. All data were presented as median values and interquartile ranges. P-values less than 0.05 were considered statistically significant for all analyses.

Comparison of clinical findings and MRI parameters between the three groups 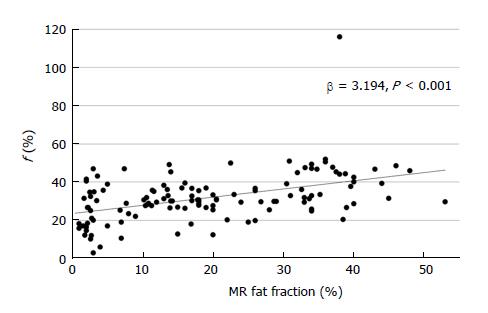 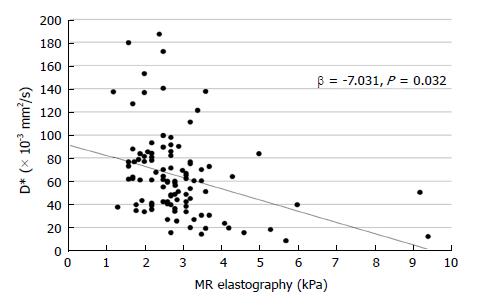 The IVIM technique has been used for kidney and liver diseases in a few previous studies of children[10-12,17,18]. Among the studies that included children, only one included only a pediatric population for assessing the usefulness of liver IVIM technique using three b-values in pathologically proven NAFLD[12]. In addition, there was no study that evaluated the meanings of IVIM parameters only in children, including normal, fatty, and fibrotic livers with sufficient b-values for IVIM, as in our study.

Our study is meaningful because we demonstrated the feasibility of IVIM with multiple b-values in pediatric liver MRI. The ages of the included children ranged from 6 to 18 years, younger than those in previous studies, and the included number of children was large. In addition, multiple b-values are needed to differentiate slow and fast diffusion with higher robustness and accuracy[19,20], because fast diffusion (D*) can be differentiated from low b-values, and slow diffusion (D) can be differentiated from high b-values. Therefore, our methods using multiple b-values could lead to more accurate quantification and separation of IVIM parameters than previous studies.

The results revealed that hepatic steatosis and fibrosis influenced perfusion and diffusion parameters differently, while ADC did not show any significant correlation for these conditions; these results were concordant with previous studies[7,8]. In our study, increased PDFF value was a significant independent factor for increasing f value, which meant a positive correlation between hepatic steatosis and blood volume in pediatric NAFLD. In addition, increased MRE value was a significant independent factor for decreasing D* value, which signified a negative correlation between hepatic fibrosis and endovascular blood flow velocity in children with BA. We performed multivariate logistic regression tests including liver function tests and PDFF and MRE values because liver inflammation, steatosis, and fibrosis could together influence histopathologic changes of the liver and slow and fast diffusions, and we could not obtain pathologic results from the included children.

There were several limitations in this study. First, there were disproportional subject numbers in the groups, because it was a retrospective study. Second, we did not obtain the pathologic results of the liver in the children. However, we used the radiological and clinical data of the children to define three groups as reasonably as possible. Moreover, the obtained IVIM values of our normal group were similar to the normal values of a recently published meta-analysis study[27]. Third, several factors might influence liver perfusion, including inflammation and edema, were not analyzed. However, most of the children in our study were from an outpatient clinic and were undergoing routine follow-up, and we performed regression analysis including liver function tests to evaluate the effects of liver inflammation on IVIM parameters.

In conclusion, the liver IVIM DWI technique with multiple b-values was feasible and useful for evaluating hepatic steatosis and fibrosis in children using perfusion-related parameters of D* and f. There was a positive correlation between hepatic fat and blood volume, and a negative correlation between hepatic fibrosis and endovascular blood flow velocity, while diffusion-related parameters were not affected. Further study is needed to determine whether the IVIM parameters are affected by different histopathologies and etiologies of pediatric hepatic steatosis and fibrosis.

Liver disease including steatosis and fibrosis is not uncommon in pediatric population. Quantitative and non-invasive examination of liver status is important in children because biopsy has a limited role from its sampling error and invasiveness.

Intravoxel incoherent motion (IVIM) magnetic resonance imaging (MRI) is an advanced diffusion-weighted imaging (DWI) technique. It can separate the perfusion and diffusion components from the conventional apparent diffusion coefficient (ADC) in the liver. Previous studies demonstrated IVIM values were more useful than ADC value for the evaluation of liver disease in adults, using the pure molecular diffusion (D), pseudo-diffusion (D*), and perfusion fracture (f) parameters. However, limited studies have assessed hepatic steatosis and fibrosis in children using IVIM. In addition, no study has focused on pediatric livers with enough b-values for IVIM.

We retrospectively reviewed liver IVIM MRI of children (≤ 18 years) who performed MRI with 8 b-values under the suspicion of liver steatosis or fibrosis from 2013 to 2016. In addition to the conventional ADC value, perfusion related parameters (D*, f) and diffusion related parameter (D) were measured in the liver. Degree of hepatic steatosis was measured using MR proton density fat fracture (PDFF) and degree of hepatic fibrosis was measured using MR elastography (MRE). Perfusion and diffusion parameters were compared between normal, fatty liver, and fibrotic liver groups. Effects of hepatic steatosis and fibrosis on IVIM parameters were assessed.