Enterocutaneous fistulas (ECFs) are great challenges during the open abdomen. The loss of digestive juice, water-electrolyte imbalance and malnutrition are intractable issues during management of ECF. Techniques such as “fistula patch” and vacuum-assisted closure therapy have been applied to prevent contamination of open abdominal wounds by intestinal fistula drainage. However, failures are encountered due to high-output fistula and anatomical complexity. Here, we report 3D-printed patient-personalized fistula stent for ECF treatment based on 3D reconstruction of the fistula image. Subsequent follow-up demonstrated that this stent was well-implanted and effective to reduce the volume of enteric fistula effluent.

Core tip: There are few reports about how to manage enterocutaneous fistulas (ECFs) after open abdomen, especially those that are unlikely to achieve spontaneous closure. This case report describes how to use 3D printing technique to fabricate a fistula stent in accordance with the ECF anatomy, and how the stent can improve enteric effluent, patient’s nutrition and physical strength, and surrounding wound inflammation.

Enterocutaneous fistula (ECF) is defined as an abnormal, unintentional connection between the gastrointestinal (GI) tract and the skin or the GI tract and the atmosphere (enteroatmospheric fistula, EAF) in the open abdomen (OA)[1]. Protective strategies such as Bogota bag, mesh products, Wittman patch and vacuum-assisted closure (VAC) therapy have been devised, which nevertheless fail to prevent the occurrence of ECF with an incidence of 5.7%-54.5%[2]. Patients with ECF have life-threatening malnutrition and sepsis, with a mortality rate 6%-33%[3].

Since the enteric effluent consists of pancreatic fluid, bile and intestinal secretions, uncontrolled effluent of ECF leads to repeated inflammation of surrounding skin. In addition, the loss of excessive digestive juice adds to the severity of water-electrolyte imbalance. Therefore, controlling the enteric effluent has become the key step during the management of ECF[4].

Recent progress of negative pressure wound therapy (NPWT) has been achieved in OA management, which could significantly improve the healing process and induce spontaneous fistula closure. However, it appears to be impossible for the ECF to achieve spontaneous closure with mucosal protrusion[5]. For those who are unlikely to achieve spontaneous closure, definitive fistula resection is required after relief from all (or most) associated complications, and the abdominal cavity has become a less hostile environment. For this purpose, we introduced a novel isolation technique using 3D-printed “fistula stent” designed from 3D reconstruction of the fistula image to prevent the loss of enteric effluent.

A 45-year-old man was admitted to the local hospital after a traffic accident on January 2, 2017. His abdomen was struck directly by the handlebar of a motorcycle. Physical examination revealed abdominal tenderness and pelvic deformity. X-ray imaging suggested digestive tract perforation and pelvic fracture. Emergency laparotomy found two lesions of GI tract rupture that were surgically repaired. Pelvic fracture fixation was performed as well. On postoperative day 1, the patient presented with high fever, chill, dysphoria and fluid leakage from the surgical incision, which was confirmed as digestive juice by amylase. The patient was immediately transferred to the First Affiliated Hospital of Zhengzhou University. After carrying out open abdomen and double-pipe drainage, and administration of antibacterial agents, antacids and parenteral nutrition, the symptoms were relieved. However, the fistula did not show any tendency to achieve spontaneous closure and the surrounding tissues were severely contaminated by enteric effluent. Therefore, the patient was transferred to our hospital on June 8.

In order to reduce the surrounding tissue inflammation and maintain homeostasis, we tried to implant the “fistula patch” to block the enteric effluent[6], but failed because the patch did not match with the structure of the ECF. After investigating the anatomy of the ECF using 3D-reconstructed fistulography of contrast-mediated, high-resolution CT scanning, we found an angled GI tract connecting the ECF (Figure 1A and B, Supplementary Figure 1). In this case, fistula patch did not fit the shape of the GI tract. Therefore, we set our sights on the advanced technique of 3D printing. Two parameters were measured on the 3D reconstructive image: (1) the diameters of the proximal and distal GI tract (15 mm and 12 mm, respectively); (2) the angle between the proximal and distal GI tract (105°). These parameters were used to design a model of the fistula stent using Solidwork software (Supplementary Figure 2), followed by saving as an STL file for recognition by the 3D printer. 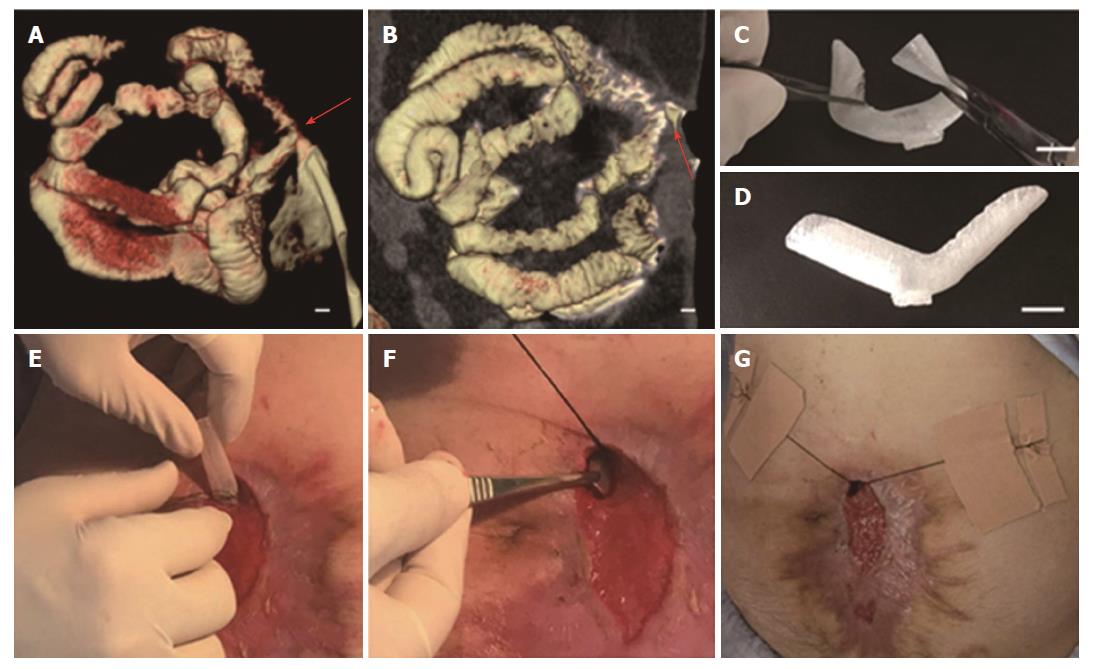 Thermoplastic urethane (TPU) is a biocompatible material with flexible mechanical properties, and has been used in medical devices such as catheters, pace-maker leads and vascular grafts[7]. TPU fuses at 230-260 °C and is deposited at room temperature. Therefore, TPU was chosen as the raw material to print the fistula stent. TPU powder of pharmaceutical grade was purchased from Shanghai JiangLai CO. LTD and processed into filaments using hot extrusion machine. A 3D printer of FDM pattern was used to print the fistula stent from STL file (Video 1). The 3D printing technique was capable of making the real product from the designed image regardless of the column, semi-column and tortuous semi-column (Figure 2). The stent was also consistent with the design, and had the ability to bend (Figure 1C) and recover (Figure 1D) the shape. A protuberance was located at the corner of the stent for sewing and immobilization.

The safety of the stent was detected using MTT assay[8]. Generally, the leachate was obtained by immersion of stent in 10 mL DMEM with 10% FBS. 10 × 104 fibroblasts (L929) was seeded into 200 μL fresh DMED or 200 μL leachate in a 96-well plate, followed by incubation at 37 °C for 24 h, 48 hand 72 h. Then, MTT (5 mg/mL) reagent was added to each well and further incubated for 4 h. Afterwards, the formazan salt was dissolved with 200 μL DMSO. As soon as thoroughly dissolved, the solution was added to a new plate and measured with a microplate Spectrophotometer at 570 nm (n = 3). As shown in Supplementary Figure 3, the result indicated the leachate of stent did not influence the cell viability and exhibited a good biocompatibility. 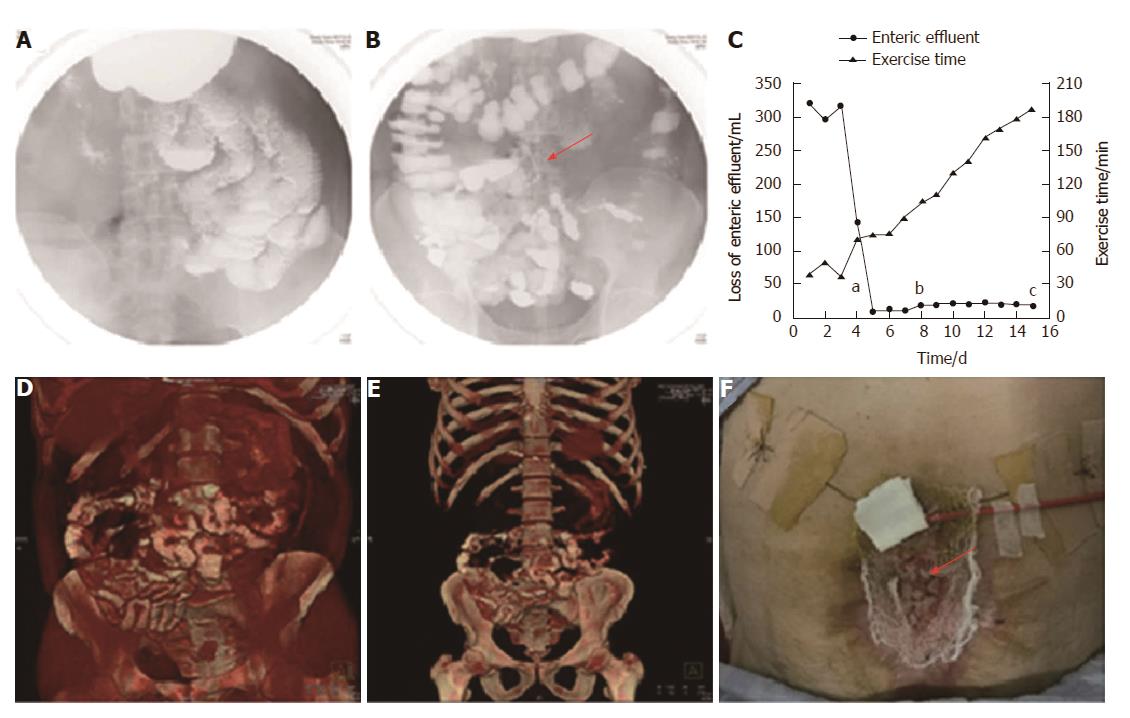 The fistula stent was trimmed on its two sides. It was then implanted through the fistula orifice, and fixed with threads and adhesive tapes on June 17(Figure 1E-G, Video 2).

Two days after implantation, a barium meal examination was carried out to investigate patency of the GI tract. The barium was able to pass through the GI tract smoothly without obstruction (Figure 3A), and the fistula stent was ambiguously displayed (Figure 3B). Therefore, octreotide was stopped and enteral nutrition (EN) began on June 21 to prepare for the future definitive fistula resection. On June 26, a barium meal indicated that the bowel was well tolerated to EN without obstruction (Figure 3D and E). The loss of enteric effluent was recorded from 3 d before implantation. At that point, the amount of lost enteric effluent was calculated using the following formula: Vloss = Vdrainage - Virrigation; where Vdrainage represented the amount of drainage fluid from the fistula orifice, and Virrigation the volume of fistula irrigation fluid. After stent insertion, the Vloss was equivalent to the amount of drainage fluid as follows: Vloss = Vdrainage. As shown in Figure 3C, the patient presented with low output ECF (< 500 mL/24 h) before implantation. On the day of implantation, Vloss was significantly decreased. Subsequently, the loss of enteric effluent was maintained at a low level even when EN was administered. Leakage of enteric effluent only occurred during postural change, especially from standing to lying. Simply lying, standing or walking did not lead to the leakage. In that case, it was convenient to remove the leaked enteric effluent and take good care of the surrounding granulation tissues. The patient had greater tolerance to physical rehabilitation, potentially due to reduced loss of enteric effluent and regaining EN. Abdominal wall reconstruction was performed by skin transplantation (Figure 3F) and the skin graft survived after 7 d. Afterwards, the patient was discharged to a rehabilitation center for wound healing and future ECF resection. On September 20, the patient received ECF resection and was discharged 10 d later.

In this report, we described a novel fistula stent using both 3D reconstruction of an ECF image and 3D printing technique. The fistula stent complied with the complicated ECF anatomy. Two points are very important to design the stent: bowel diameters and angle.

This method is an ideal supplement to NPWT techniques since the stent can create an isolated environment for ECFs that cannot achieve spontaneous closure. Compared with our previous plugging strategies such as fistula patch and fibrin glue[9], this fistula stent complies with the shape and direction of the ECF, which leads to less mechanical damage to the surrounding GI mucosa. Moreover, it could reduce the loss of enteric effluent, thus preventing water-electrolyte imbalance. It has been reported that fistuloclysis lessens the loss of enteric effluent via collecting the proximal ECF output and reinfusing through the fistula feeding tube[3]. However, it still has several disadvantages such as distal location of the fistula, inability to cannulate the fistula to obtain distal enteral access, or rejection by patients to infuse the enteric contents after they have left the body. The fistula stent was capable of overcoming these difficulties by its patient-personalized design and restoration of GI tract integrity.

Rebibo et al[10] reported a new treatment to manage ECFs by stent placement under the endoscopic guidance in patients with terminal ileostomy. However, their method was different from the fistula stent in our study. First, it was not necessary for us to enroll patients with terminal ileostomy because the stent was short and flexible enough for implantation. Second, the process of the implantation was simpler. Third, the cross-section of our stent was not a full circle, which meant less GI mucosa was influenced by this intervention. Based on the superiority of the 3D-printed fistula stent, a study with a larger number of patients is needed to confirm the applicability of this treatment.

In conclusion, as a tailored GI isolation technique, a 3D-printed fistula stent was fabricated under the guidance of 3D-reconstructed fistulography, and was effective for control of the loss of enteric effluent in this ECF patient. Therefore, this method should be advocated, and the clinical outcomes merit further investigation.

A 45-year-old man was referred to our hospital because of non-healing enterocutaneous fistula after open abdomen.

The clinical diagnosis was enterocutaneous fistula of small intestine.

Enterocutaneous fistula of small intestine by detection of amylase in drainage fluid.

3D-printed fistula stent was highlight during management of the enterocutaneous fistula (ECF) patient.

Previously, traditional stent was reported to manage ECF in patients with terminal ileostomy.

ECF is defined as an abnormal, unintentional connection between the gastrointestinal (GI) tract and the skin or the GI tract and the atmosphere in the open abdomen.

The 3D-printed fistula stent can be designed to match with ECF anatomy and reduce the loss of enteric effluent and prevent the contamination of surrounding granulation tissues, thus leading to making a good preparation of ECF resection.

Authors reported how to use 3D-printed fistula stent to manage ECF. The method was novel and very interesting.