Magnesium deficiency can cause a variety of symptoms, including potentially life-threatening complications such as seizures, cardiac arrhythmias and secondary electrolyte disturbances. Hypomagnesemia can be a serious adverse effect to proton pump inhibitor (PPI) therapy, which is worrying due to the widespread use of PPIs. Current evidence suggest that the mechanism of PPI induced hypomagnesemia is impaired intestinal magnesium absorption. In this report, we present the case of a long-term PPI user with persistent hypomagnesemia with severe symptoms at presentation. He was unable to stop PPI treatment because of severe reflux symptoms, and was dependent on weekly intravenous magnesium infusions, until his magnesium levels finally normalized without the need for supplementation after a successful laparoscopic fundoplication.

Core tip: This case illustrates a long-term proton pump inhibitor (PPI) user with persistent hypomagnesaemia causing severe symptoms at presentation. For years, he was dependent on oral and later intravenous magnesium supplementation, until his hypomagnesemia rapidly improved upon PPI discontinuation. He was, however, not able to cope with the resulting reflux symptoms, and was not able to completely stop PPI treatment until he underwent a successful laparoscopic fundoplication.

Magnesium plays an essential role in several physiological and biochemical bodily processes. Consequently, magnesium deficiency can cause a variety of symptoms, ranging from nonspecific complaints of weakness, fatigue and nausea to potentially life threatening complications such as seizures, cardiac arrhythmias and secondary electrolyte disturbances. Hypomagnesemia can develop due to gastrointestinal and/or renal disease, as well as an adverse effect to several medications. Several reports of severe hypomagnesemia associated with long term proton pump inhibitor (PPI) therapy[1,2] is causing concern due to the widespread use of PPIs[3]. Current evidence suggest that PPI impair the intestinal magnesium absorption through a molecular effect on magnesium transporters in genetically predisposed individuals[4].

We present the first case of a long-term PPI user with severe and symptomatic persistent hypomagnesemia treated with surgery. Due to severe reflux, the patient was PPI dependent, and needed weekly intravenous magnesium infusions. After a successful laparoscopic fundoplication, the PPI treatment could be discontinued, and the magnesium levels normalized without the need for supplementation.

A 67-year-old male with a history of gastroesophageal reflux disease (GERD) and hypertension, first presented with severe hypomagnesemia during a hospital admission in 2012. At that time, he was taking 10 mg amlodipine and 20-40 mg omeprazole daily. Prior to admission, he had suffered from severe dizziness, double sight and vomiting for several weeks, and was initially dehydrated with electrolyte derangement (hypokalemia). A few days after admission he developed general seizures, and additional laboratory tests revealed severe hypomagnesemia [0.23 mmol/L (0.71-0.94 mmol/L)], considered a result of excessive vomiting prior to admission. His serum electrolyte levels normalized upon intravenous treatment. An extensive work-up resulted in a possible diagnosis of viral encephalitis, and after discharge, he underwent a prolonged rehabilitation course. A year later, he was re-admitted because of dizziness, balance problems and paresthesia. Laboratory results again showed severe hypomagnesemia (0.08 mmol/L). He received intravenous magnesium infusions and his symptoms disappeared. During ambulatory follow-up, he was found to have persistent hypomagnesemia, and oral magnesium was prescribed. He underwent endocrinological and gastrointestinal investigations including colonoscopy, which did not reveal any other cause of his hypomagnesemia. His urinary magnesium level was low (< 0.080 mmol/L). Despite oral magnesium supplementation, magnesium levels continued to stay low, and in 2015, he was started on weekly magnesium infusions to maintain normal magnesium levels. The only medication he was on during these years was omeprazol 20-40 mg daily. He had been advised several times during the years to stop PPI treatment, but was unable to cope with the resulting reflux symptoms. In April 2016, he did, however, agree to stop taking PPI and consequently maintained normal magnesium levels without infusions. 24-h pH testing confirmed reflux disease, and he was offered anti-reflux surgery (laparoscopic fundoplication). While awaiting the operation, he started taking daily PPI again, which resulted in a prompt drop in his serum magnesium levels demanding a resumption of weekly magnesium infusions. The patient underwent a laparoscopic fun-doplication and was discharged after an uncomplicated peri-and postoperative course. After the operation, the reflux symptoms as well as the need for PPI disappeared, and his magnesium level maintained normal without supplementation at the follow-up visit. The course of the patient’s magnesium levels is illustrated in Figure 1. 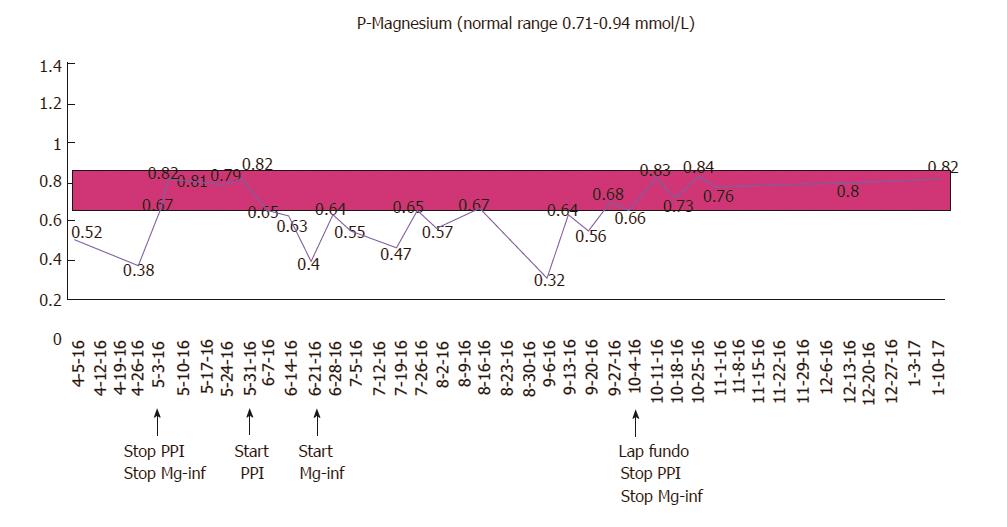 Figure 1 Course of the patient’s magnesium levels. The figure illustrates how the patient´s S-Mg level stays persistently below the normal range while he is on PPI therapy despite receiving magnesium infusions. S-Mg normalizes promptly after cessation of PPI therapy. PPI: Proton pump inhibitor.
DISCUSSION

This rare case illustrates a long-term PPI user with persistent hypomagnesemia causing severe symptoms at presentation. For years, he was dependent on oral and later weekly intravenous magnesium supplementation, until his hypomagnesemia rapidly improved upon PPI discontinuation. Re-challenge of PPI treatment resulted in a prompt drop in serum magnesium within days, and his magnesium levels again normalized rapidly following PPI withdrawal after laparoscopic fundoplication.

PPI-induced hypomagnesemia (PPIH) was first described by Epstein et al[5] in 2006, and subsequently several other case reports have demonstrated the association. In 2011, the United States Food and Drug Administration issued a safety announcement regarding the association between long term PPI use and hypomagnesemia, and PPIH is now well-established as a rare, but potentially serious, adverse effect of long term PPI treatment. However, PPIH is still not widely acknowledged, and the frequency and risk factors of PPIH are not well recognized.

PPIH has been observed with all different formulations of PPIs and is thus considered a class drug effect. Similar to our case, previous reports have documented only partial effect of oral magnesium supplements in correcting the hypomagnesemia during ongoing PPI-therapy[2], and only short term relief with intravenous magnesium infusions. In contrast, hypomagnesemia is typically improved promptly after the PPI is discontinued, and PPI re-challenge results in rapid recurrence of hypomagnesemia[1,2]. The same phenomenon has not been observed with histamine 2 receptor antagonists (H2RAs), although a recent population-based study suggested a similar but weaker association with the use of these drugs[6]. Previous reports have suggested that PPIH occurs after long term PPI use[1]; however, duration of exposure to PPI therapy is often difficult to quantify retrospectively and the duration of PPI use necessary to cause PPIH remains uncertain.

Magnesium homeostasis is mainly determined by absorption in the small intestine, and renal excretion. Intestinal magnesium absorption is complex, and occurs via both passive and active transport mechanisms. Firstly, magnesium is passively absorbed through a paracellular pathway between the enterocytes of the intestine across a concentration gradient. Secondly, a transcellular active transport mechanism occur by means of a combined action of magnesium channels in the apical membrane of enterocytes on the luminal surface, particularly transient receptor potential melastin (TRPM) 6 and 7. It has been proposed that increased luminal pH in the intestine caused by PPIs may alter the affinity of the TRPM6/7 channel for magnesium, resulting in reduced active transport of magnesium, and that individual genetic variations in the TRPM could explain why PPIH does not develop in all PPI users[4]. Several other drugs can cause hypomagnesemia, where the underlying mechanism is tubular magnesium wasting[1]. In contrast, previous case reports of PPIH have documented consistently low urinary excretion coherent with efficient tubular magnesium retention[1,2], which is thought to support the theory of impaired gastrointestinal absorption as the mechanism leading to PPIH.

Some patients might be more susceptible to PPIH due to other coexisting risk factors such as concomitant medication (diuretics) or other medical conditions associated with hypomagnesemia such as diabetes mellitus, inflammatory bowel disease, short-bowel disease, chronic pancreatitis, diarrhea and/or alcoholism. It remains controversial whether serum magnesium should be monitored in all long-term PPI users, or perhaps in specific subsets of patients with additional risk factors. Nonetheless, PPIH should be remembered as a differential diagnosis in patients with PPI use and unexplained hypomagnesemia. Patients with PPIH and persistent troublesome reflux symptoms after PPI discontinuation could be considered for anti-reflux surgery. It should be remembered, however, that a majority of patients treated with anti-reflux surgery have resumed PPI therapy 10-15 years after the operation[7], and it is mandatory to control for hypomagnesemia if patients with previous PPIH resume PPI treatment.

Extensive work-up did not reveal any other cause of hypomagnesaemia. Serum magnesium levels rapidly normalized upon pump inhibitor (PPI) discontinuation, and re-challenge of PPI treatment resulted in a prompt drop in serum magnesium within days. Magnesium levels again normalized following PPI withdrawal after laparoscopic fundoplication.

Gastrointestinal or renal disease causing either impaired absorption or increased excretion of magnesium.

Neither colonoscopy nor CT scans revealed any other explanation for the patient´s persistent hypomagnesaemia.

Biopsies taken from terminal ileum and colon during colonoscopy were normal.

The patient underwent a successful laparoscopic fundoplication, and his serum magnesium levels again normalized following PPI withdrawal after the surgery.

PPI-induced hypomagnesemia (PPIH) was first described in 2006, and subsequently several other case reports have demonstrated the association. In 2011, the US Food and Drug Administration issued a safety announcement regarding the association between long term PPI use and hypomagnesemia, and PPIH is now well-established as a rare, but potentially serious, adverse effect of long term PPI treatment.

PPIH is a rare, but potentially serious adverse effect where persistent severe hypomagnesemia is associated with of long-term PPI treatment. PPIH is probably caused by impaired intestinal magnesium absorption through a molecular effect on magnesium transporters in genetically predisposed individuals.

PPIH should be remembered as a differential diagnosis in patients with PPI use and unexplained hypomagnesemia. Patients with PPIH and persistent troublesome reflux symptoms after PPI discontinuation could be considered for anti-reflux surgery

The manuscript describes surgical option in the management of hypomagnesemia induced by PPIs. The condition has been described earlier but fundoplication as an option has not been discussed in earlier reports. The manuscript is well written and may be accepted with few clarifications.