From January 2016 to March 2017, a total of 20 consecutive patients with colon cancer accepted TLC and the ODA technique at our medical center. Patient demographics, operative outcomes, perioperative complications, and pathological results were collected and analyzed.

We successfully completed TLC and the ODA procedure in all 20 cases, including 6 (30%) males and 14 (70%) females. In total, 11 (55%), 2 (10%), and 7 (35%) cases accepted right hemicolectomy, transverse hemicolectomy, and left hemicolectomy, respectively. None of the surgeries were converted to an open operation. Mean operative time was 178.5 min, and mean estimated blood loss was 58.5 mL. Mean time to first flatus was 2.5 d, and mean postoperative hospitalization duration was 6.8 d. No severe complications occurred, such as anastomotic leakage, snastomotic stenosis, anastomotic bleeding, and wound infection, except for one case who suffered from an abdominal infection and another case who suffered from gastric paralysis syndrome. Tumor recurrence was not observed in any patient during the follow-up period.

The ODA technique for colon cancer cases undergoing TLC appears to be safe and feasible, although our current results need to be verified in further studies.

With the improvement of living standards and the extension of life expectancy, the incidence of colon cancer is increasingly rising and will continue to rise in China[1,2]. Surgery is the mainstay of treatment for colon cancer. Over the past three decades, minimally invasive surgery for colon cancer has drawn more and more attention[3]. Nowadays, laparoscopic assisted colectomy (LAC) is widely used for cases with colon cancer and the advantages of this procedure have been widely verified[4-6].

With the advances in surgical devices and the improvements in surgical performance, totally laparoscopic colectomy (TLC) has gradually been adopted by experienced surgeons[7-8]. In theory, the TLC procedure conforms more to the concept of minimally invasive surgery and the principle of the tumor-free technique, while the intracorporeal anastomosis (IA) technique still represents one of the biggest difficulties for surgeons during TLC.

As a new technique, delta-shaped anastomosis was first presented by a Japanese scholar named Kanaya in 2002 after he completed the first case of totally laparoscopic gastroenterostomy (TLG)[9]. This procedure has been widely adopted for TLG and has proven to be both safe and feasible[10-12]. However, delta-shaped anastomosis for TLC is rarely reported. Since January 2016, an innovative technique named “overlapped delta-shaped anastomosis (ODA)” has been applied to colon cancer cases undergoing TLC at the National Cancer Center/Cancer Hospital, Chinese Academy of Medical Sciences and Peking Union Medical College. Herein, we introduce this surgical innovation and assess its feasibility and safety.

Prior to surgery, the advantages and disadvantages of TLC and ODA were explained to all patients in detail, and then preoperative informed content was acquired. All patients underwent the same preoperative examinations including routine blood tests, chest X-ray, electrocardiogram examination, and computerized tomography (CT) of the abdominal and pelvic cavity to exclude cases with surgical contraindications and distant organ metastasis. Patients with intestinal obstruction were excluded from our study. The American Joint Committee on Cancer (AJCC) staging system (the seventh edition) was used for tumor staging. Postoperative pain was evaluated by the patients on a subjective visual pain scale ranging from 0 to 10, with 0 representing no pain and 10 representing the worst pain imaginable. The ethics committee at our institution approved this study, and this retrospective study conformed to the ethical standards of the World Medical Association Declaration of Helsinki.

From January 2016 to March 2017, a total of 20 consecutive patients with colon cancer underwent TLC and the ODA procedure. All of these cases accepted colonoscopy examination, and colon cancer was diagnosed by pathology. Preoperative mechanical bowel preparation was performed using polyethylene glycol electrolyte powder. Preventative antibiotics were administered by intravenous drip 30 min pre-operatively and continued for 24 h after the operation.

Step 1: Positioning the patient and placing trocars: The patient was placed in the modified lithotomy position. A five-port technique was used: a 12 mm sub-umbilical port as the observation port, a 12 mm port located in the left upper quadrant as the primary operating port, and three 5 mm ports located in the left lower quadrant, the right lower quadrant and the right upper quadrant, respectively, as the secondary operating ports (Figure 1). Abdominal pressure was maintained at approximately 15 mmHg, and then the patient was placed in the Trendelenburg position and left tilt applied in order to expose the mesenteric root, ileocolic vessels, and superior mesenteric vessels. 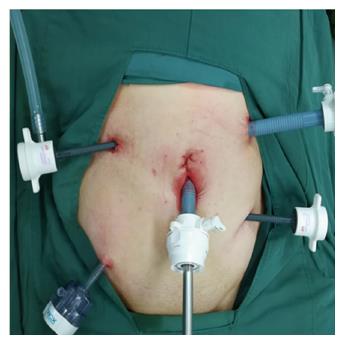 Step 2: Clearing lymph nodes and tailoring the mesentery: Along the surface of the superior mesenteric vessels, the mesocolon was dissected in a bottom-up fashion, and then the ileocolic vessels, ascending colon vessels, and the right branch of the transverse colon vessels were exposed and carefully severed (Figure 2A). During this process, attention should be paid to the gastrocolic trunk, pancreatic head, duodenum, and right gastroepiploic vessels, such that these structures are protected. Next, adhesions between the right abdominal wall and the ascending colon were dissected in a similar bottom-up fashion. Finally, the mesentery of the terminal ileum approximately 15 cm away from the ileocecal region, and the right half of the transverse colon, was tailored, respectively. 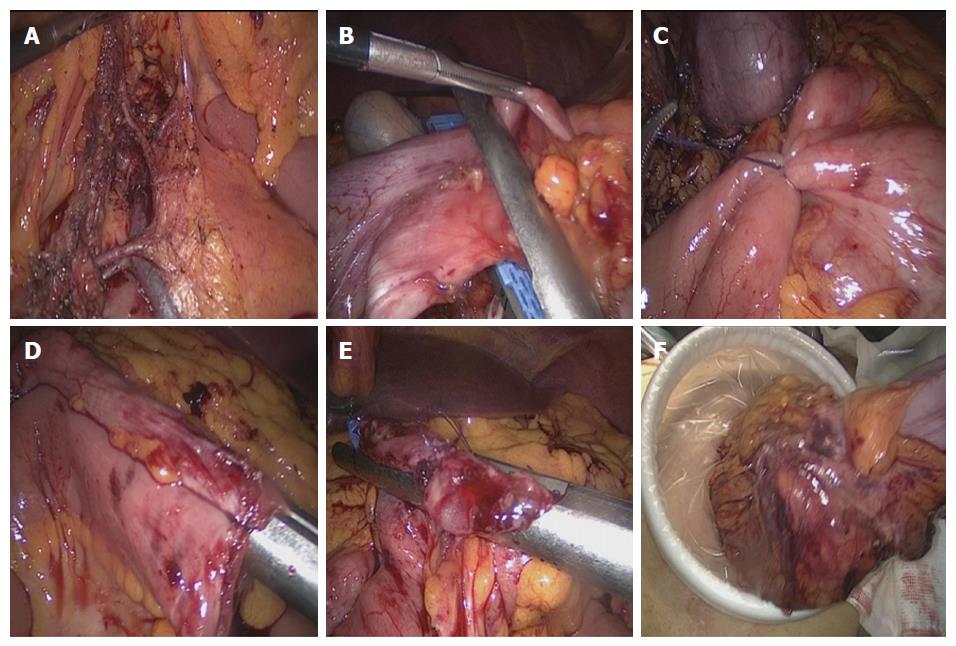 Step 3: Transecting and anastomosing the bowel: The terminal ileum and the right half of the transverse colon were transected using two endoscopic linear cutter staplers (Johnson and Johnson, PSE60A and ECR60B) (Figure 2B). The broken ends were sterilized using alcohol gauze swabs. Then, the proximal ileum and the distal transverse colon were fixed using a piece of absorbable suture; this was performed in an overlapped fashion in order to facilitate anastomosis (Figure 2C). Two small openings located at the ileum and the transverse colon were created using an ultrasound scalpel. After imbedding the lumens with another endoscopic linear cutter stapler, intestinal walls with no mesentery were got through (Figure 2D). Finally, the common opening was closed using an endoscopic linear cutter stapler (Figure 2E). The specimen was removed from the abdominal cavity using a transverse incision above the symphysis pubis (Figure 2F).

The ways the transverse and left colectomy was performed were similar to the method above mentioned in the right hemicolectomy, including the number of trocars, type of staplers, and same anisoperistaltic anastomosis.

The first day after surgery represented the beginning of the follow-up period. Patients were asked to visit doctors every three months after leaving hospital until two years after surgery, biannually for the next three years and then annually, and the deadline of follow-up period was March 31, 2017.

Statistical Package for the Social Sciences (SPSS) software (21.0 version for Windows; SPSS Inc. Chicago, IL, United States) was used for data analyses. Quantitative data following a normal distribution are provided as mean and its range. Qualitative data are provided as number and its percentage. The statistical methods of this study were reviewed by Wang M from our institution.

The mean operative time was 178.5 min (range: 155-225 min), and mean estimated blood loss was 58.5 mL (range: 30-100 mL). For all 20 cases, the mean time to first flatus was 2.5 d (range: 1-3 d), and mean first time to oral intake was 3.0 d (range: 2-4 d). Mean postoperative hospitalization period was 6.8 d (range 5-8 d). Patients only reported slight pain (scoring 2.8 on average) on the first day after the operation, and there was almost no pain (scoring 0.7 on average) by the third day after the operation. No severe complications were encountered, such as anastomotic leakage, anastomotic stenosis, anastomotic bleeding, deep vein thrombosis, or intestinal obstruction, except one case who suffered from abdominal infection due to chylous fistula, and another case who suffered from gastric paralysis syndrome. However, both of these patients made a heathy recovery with conservative treatments. There were no deaths during the perioperative period (Table 2). 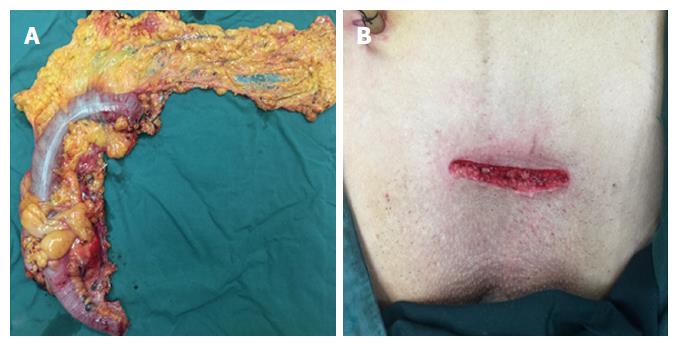 Figure 3 Typical specimen (A) and a transverse incision above the symphysis pubis (B).
DISCUSSION

In 2002, the Japanese scholar Kanaya first reported the delta-shaped anastomosis of TLG[9]. In 2011, he summarized 100 cases of delta-shaped anastomosis performed by eight surgeons, and the results showed that, on average, only 13 min were needed to complete anastomosis, and that all eight surgeons experienced a short learning curve. In addition, this earlier study reported that patients had an early time of first oral intake[18]. Subsequently, more and more studies confirmed the advantages of this procedure[10-12].

In the present study, we performed TLC in 20 colon cancer cases using a new IA method named the ODA procedure; all surgeries were carried out smoothly and none of the cases were converted to open operation. Patients had slight pain after surgery and showed early time of first flatus and oral intake. The results also showed that the ODA procedure did not increase postoperative complications and that radical resection was also guaranteed. In particular, the transverse incision above the symphysis pubis was only 4.8 cm in length, much shorter and more covert than that required for LAC. Collectively, these observations provide promising results with regard to its feasibility and safety. It thus appears that TLC and the ODA procedure are more in line with the concept of minimally invasive surgery and enhance recovery following surgery.

This was a retrospective study and only 20 patients were included; these factors may, therefore, represent potential limitations. However, all operations were successfully accomplished and no severe complications occurred. Prospective randomized controlled trials with larger sample sizes and longer follow-up periods are now needed to confirm our results.

The ODA technique for cases with TLC appears to be safe and feasible for suitable patients when performed by experienced surgeons. This promising result now allows us to cater for colon cancer patients who require medical cosmetology.

With the advances in surgical devices and the improvements in surgical performance, totally laparoscopic colectomy (TLC) has gradually been adopted by experienced surgeons in large medical centers. However, the intracorporeal anastomosis (IA) technique is one of the biggest difficulties encountered by surgeons during the TLC procedure, and the currently adopted delta-shaped anastomotis technique is difficult to operate.

Now, the mainstream of colectomy for colon cancer is still laparoscopic assisted colectomy. TLC is only adopted by experienced surgeons in large medical centers for the difficulties of IA technique.

In the present study, we have reported, for the first time, the ODA technique adopted during the TLC procedure. The perfect result has proven its feasibility and safety. Therefore, the ODA procedure can be applied to colon cancer patients who have no contraindications for laparoscopic surgery.

The ODA procedure is currently used for the anastomosis between the proximal and distal intestinal canals for colon cancer cases who accepted TLC.

IA technique is one of the biggest difficulties during the TLC procedure. The authors report an innovative IA technique named the “ODA technique”. The short-term outcomes are exciting and it deserves further promotion.