Among the various diagnostic modalities for small bowel hemangioma, video capsule endoscopy (VCE) and double-balloon enteroscopy (DBE) can be recommended as part of the work-up in patients with obscure gastrointestinal bleeding (OGIB). DBE is superior to VCE in the accuracy of diagnosis and therapeutic potential, while in most cases total enteroscopy cannot be achieved through only the antegrade or retrograde DBE procedures. As treatment for small bowel bleeding, especially spout bleeding, localization of the lesion for the decision of DBE insertion facilitates early treatment, such as endoscopic hemostatic clipping, allowing patients to avoid useless transfusion and the worsening of their disease into life-threatening status. Applying endoscopic India ink marking prior to laparoscopic surgical resection is a particularly useful technique for more minimally invasive treatment. We report two cases of small bowel hemangioma found in examinations for OGIB that were treated with combination of laparoscopic and endoscopic modalities.

Core tip: Small bowel hemangioma is a relatively rare small bowel tumor and can cause gastrointestinal bleeding, which often results in a diagnostic dilemma. video capsule endoscopy (VCE) and double-balloon enteroscopy are both useful modalities for the diagnosis of small bowel disease with obscure gastrointestinal bleeding including hemangioma, and preceding observation by VCE can result in a synergistic treatment effect. Furthermore, applying endoscopic India ink marking prior to laparoscopic surgical resection is a useful technique for achieving minimally invasive treatment.

The detection of small bowel bleeding using conventional endoscopy is difficult because of the anatomical features of the small intestine. The current clinical guideline including diagnosis and management for patients with suspected small bowel bleeding is provided by American College of Gastroenterology[1]. Among the diagnostic modalities, such as video capsule endoscopy (VCE), double-balloon enteroscopy (DBE), computed tomography (CT), magnetic resonance, enterography, angiography and scintigraphy, VCE and DBE show the greatest impact on the diagnosis and treatment of small-bowel disease[2-4]. We herein report two cases of small bowel hemangioma found in examinations for obscure gastrointestinal bleeding.

A 62-year-old Japanese female who had been admitted to another facility presented with black (tar) colored stools and general malaise as her chief complaints. There was no past medical problem. Though she had a severe iron-deficiency anemia, general gastrointestinal examinations including upper endoscopy and total colonoscopy to the terminal ileum were normal. She was referred to our hospital for a detailed examination of obscure gastrointestinal bleeding (OGIB). Although she had received repeated transfusions of red blood cells with one as recent as one week prior, her initial hemoglobin level was 3.8 g/dL. Her coagulating system and tumor markers including carcinoembryonic antigen (CEA) and carbohydrate antigen 19-9 (CA19-9) were normal. VCE revealed the exact location of the lesion (Figure 1A), and DBE revealed spout bleeding in the upper jejunum (Figure 1B). The DBE showed a raised lesion (15 mm) with smooth surface in the upper jejunum site of approximately 60 cm (Figure 1B and C). We suspected the lesion as small intestinal hemangioma or arteriovenous malformation. We performed endoscopic hemostatic clipping of the lesion (Figure 1D), and during the endoscopic procedure, applied a visualization technique for tumor localization using India ink tattooing. Finally, we performed a video-assisted single-port laparoscopic enterectomy (Figure 2A). The resected specimen contained a depressed lesion with necrosis-related slough of endoscopic clipping lesion (Figure 2B). Histological findings revealed a cavernous hemangioma without atypia mainly composed of submucosa (Figure 2C). She was dismissed from the hospital 8 d after undergoing surgery. 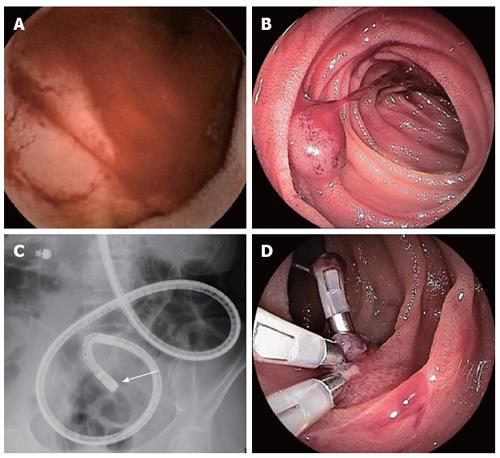 Figure 1 Evaluation of endoscopic findings (case 1). Video capsule endoscopy (A) and double-enteroscopy (B and C) show a raised lesion with smooth surface in the upper jejunum, and double-balloon enterscopy showed spout bleeding of the lesion. The lesion in the jejunum was disclosed 29 min after capsule ingestion (pylonus passage at 16 min) (A). Detailed localization of the target lesion using fluoroscopy is shown by the end of endoscopic insertion (arrow) (C). The lesion underwent endoscopic hemostatic clipping (D).

A 52-year-old Japanese male visiting his family doctor presented with black (tar) colored stools for 3 mo as his chief complaint. He had hypertension, hyperlipidemia and type 2 diabetes mellitus without complications. Though he was diagnosed with only mild iron-deficiency anemia, his hemoglobin level had decreased by approximately 35% in 6 mo. Therefore, a general gastrointestinal examination was performed. When upper endoscopy and total colonoscopy showed almost normal results, he was referred to our hospital for a detailed examination of OGIB. His initial hemoglobin level was 11.3 g/dL. Early-phase contrast-enhanced computed tomography (CECT) showed a small nodule enhancement in the ileum (Figure 3A). VCE revealed the precise location of the lesion (Figure 3B), and DBE revealed submucosal tumor-like (SMT) raised lesion (10 mm) with central erosion in the lower ileum (Figure 3C); still, histological findings from the endoscopic biopsy showed nonspecific changes. We preoperatively diagnosed the lesion as hemangioma, and performed a video-assisted laparoscopic enterectomy using preoperative endoscopic India ink tattooing (Figure 3D). Histological findings revealed a capillary hemangioma without atypia from the muscle layer to the mucosal layer (Figure 3E). The patient was dismissed from the hospital 8 days after surgery. 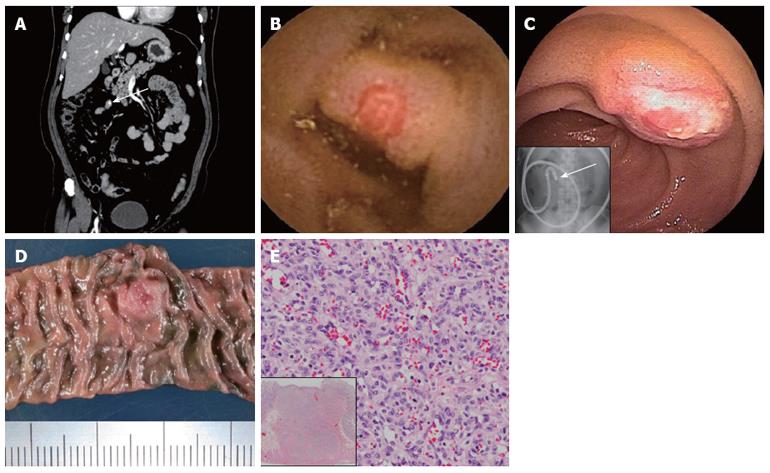 Figure 3 Evaluation of clinical finding (case 2). Early-phase contrast-enhanced computed tomography reveals small nodule enhancement in the ileum (arrow) (A). Video capsule endoscopy (B) and double-balloon enteroscopy (C) show a submucosal tumor-like raised lesion with central erosion in the lower ileum. The lesion in the jejunum was disclosed 145 min after capsule ingestion (pylorus passage at 140 min) (B), inset indicates fluoroscopic localization of target at the end of the endoscope insertion (arrow) (C). Surgical specimen from the small intestine, including the indicated lesion with India ink tattooing (D). Histological finding (H-E stain) in the resected specimen show cirumferential capillary growth without atypia from the mucosa to the muscle. Inset shows a low-power filed view (E).
DISCUSSION

Intraluminal gastrointestinal bleeding can be a life-threatening condition. In case of OGIB this is rarely the case when esophagogastroduodenoscopy and colonoscopy with adequate preparation have been performed[5,6], which often results in a diagnostic dilemma. In 75% of OGIB patients, the lesion is ultimately found in the small intestine, and occasionally causes recurrent or persistent bleeding[6].

Small bowel bleeding is relatively rare, comprising only about 5% of gastrointestinal bleeding[1,7]. Concerning the common causes of small bowel bleeding, the causative disease varies by age. In patients under 40 years of age, inflammatory bowel disease, the most common cause, is followed by Dieulafoy’s lesions, neoplasms, Meckel’s disease and Polysosis syndrome. In those over 40, angioectasia including arteriovenous malformation and hemangioma is followed by Dieulafoy’s lesions, neoplasms and NSAIDs ulcers[1]. In addition, Yamamoto et al[8] reported that the frequency of angioectasia-related bleeding among small bowel bleeding cases was 20%.

Of all primary small bowel tumor cases, 47% are benign[9]. Among them, small bowel hemangioma is a relatively rare primary small bowel tumor, histologically defined as a benign tumor. Wilson et al[10] reported that hemangioma constitutes approximately 10% of benign small bowel tumors and that most reported cases have occurred in the jejunum and ileum. Concerning the initial common symptoms of small bowel hemangioma, the occurrence frequency of iron-deficiency anemia, pain and intussusception are 41%, 31% and 13%, respectively[10]. Macroscopically, Chen et al[11] summarized previous endoscopy reports of intestinal hemangiomas describing the lesions as typically submucosal, purple to red, soft and pedunculated. Histologically, hemangiomas can be broadly classified in capillary, cavernous and mixed type, with the cavernous type being the most common[12]. They generally consist of numerous dilated, irregular blood-filled spaces or sinuses lined by layers of endothelial cells[13].

Recent advances in endoscopic technique including VCE and DBE have allowed preoperative diagnosis of small bowel hemangioma[11]. VCE can be recommended as part of the routine work-up in patients with obscure bleeding[14], and it is not contraindicated except in patients with stenosis of the intestine. Compared with VCE, DBE has the advantage of biopsy and therapeutic potential, such as preoperative localization, coagulation and hemostasis by clipping[15], whereas Xin indicated that successful total enteroscopy is achieved in only 1.6% of patients through the antegrade procedure[16].

In recent years, the therapeutic options including minimally invasive laparoscopic surgery represented by our cases and even non-surgical endoscopic approaches for small bowel hemangioma have been proposed. The laparoscopic approach to gastrointestinal diseases is now widely accepted, but it is generally difficult to locate the lesion by palpation, especially in the jejunum and ileum. A previous study reported on colonic tattooing in animal model with various agents, such as methylene blue, indigo carmine, toludine blue, lymphazurine, hematoxylin, eosin, indocyanine green (ICG) and India ink[17]. Only ICG and India ink tattoos persisted for more than 48 h, while ICG was associated with allergic reactions and systemic toxicity[17]. Therefore, endoscopic marking with India ink is used widely as a visualization technique for colorectal cancer, to define the operative location. India ink tattooing has a low incidence of complications (0.22%), and remains for a prolonged duration[17,18]. In the present case, we selected this visualization technique for video-assisted single-port laparoscopic enterectomy, expecting a minimally invasive effect. Concerning non-surgical endoscopic approaches, several clinical studies have reported that endoscopic mucosal resection can be a useful tool for small bowel hemangioma[19-21]. However, in addition to the common endoscopic complications including intestinal perforation and lesion persistence, the endoscopic approach for small bowel hemangioma with rich vascularity has the potential for flooding, given the potential for misconception of the lesion depth. Chen et al[11] also recommended careful consideration of the indications for endoscopic surgery. As one of the methods to overcome these potential risks, laparoscopic and endoscopic cooperative surgery (LECS) has been suggested as a new concept for tumor dissection[22]. In recent years, Kanaji et al[23] demonstrated safe and total laparoscopic resection of hemangiomas in the third portion of the duodenum using the LECS technique. Therefore, LECS may become a useful therapeutic option for small bowel hemangioma.

In conclusion, we have documented two cases of small bowel hemangioma found in examinations for OGIB. The preceding implementation of VCE made the selective decision of DBE insertion easy, and the endoscopic process facilitated early treatment, resulting in avoidance of progression to life-threatening status. In the present case report (Case 2), CECT showed small nodule enhancement in the lesion. Therefore, the preceding CECT with a characteristic of rapid and minimally invasive technique may omit VCE, making it a useful algorithm for further early treatment. These findings imply that various preoperative endoscopic contrivances may result in safer, more minimally invasive treatment.

Two cases of small bowel hemangioma found in examinations for obscure gastrointestinal bleeding (OGIB) were treated with combination of laparoscopic and endoscopic modalities.

Preoperative enteroscopy and imaging tests in each case suggested that the lesion was a small intestinal hemangioma or arteriovenous malformation.

Iron-deficiency anemia was diagnosed, with one case showing severe anemia.

Video capsule endoscopy (VCE) showed the precise location of the lesion, and double-balloon enteroscopy (DBE) revealed raised lesions with or without spout bleeding in the small intestine.

They diagnosed Case 1 and Case 2 as cavernous hemangioma and capillary hemangioma, respectively.

The patients were treated with combination of laparoscopic and endoscopic modalities.

There are no uncommon terms used in this manuscript.

The authors share this case as important knowledge for the appropriate treatment process for small bowel hemangioma.

These two case reports demonstrate that small bowel hemangioma found as an examination for OGIB were successfully treated with combination of laparoscopic and endoscopic modalities.