Accurate prediction of lymph node (LN) status is crucially important for appropriate treatment planning in patients with early gastric cancer (EGC). However, consensus on patient and tumor characteristics associated with LN metastasis are yet to be reached. Through systematic search, we identified several independent variables associated with LN metastasis in EGC, which should be included in future research to assess which of these variables remain as significant predictors of LN metastasis. On the other hand, even if we use these promising parameters, we should realize the limitation and the difficulty of predicting LN metastasis accurately. The sentinel LN (SLN) is defined as first possible site to receive cancer cells along the route of lymphatic drainage from the primary tumor. The absence of metastasis in SLN is believed to correlate with the absence of metastasis in downstream LNs. In this review, we have attempted to focus on several independent parameters which have close relationship between tumor and LN metastasis in EGC. In addition, we evaluated the history of sentinel node navigation surgery and the usefulness for EGC.

Core tip: In this review, we have attempted to focus on several independent parameters which have close relationship between tumor and lymph node metastasis in early gastric cancer. In addition, we evaluated the usefulness of sentinel node navigation surgery (SNNS) for patients with gastric cancer, in particular technical procedure of SNNS using Infrared Ray Electronic Endoscopes combined with Indocyanine Green injection.

The “less invasive” theory behind sentinel LN (SLN) biopsy concept has benefits based on the limitation of morbidity because of avoiding unnecessary LN dissection. At least theoretically, combination of SLN and less invasive surgical procedures such as laparoscopic surgery seems attractive. SNNS has potential to change the current surgical treatment of gastric cancer.

The aim of this review is to clarify the reliability of preoperative prediction of LN metastasis for patients with EGC and evaluate the clinical usefulness of SNNS.

One hundred forty-five consecutive patients with submucosa-invaded EGC were analyzed using multivariate analysis, and a formula which predicts LN metastasis was developed by linear discriminant analysis. Additionally, prospective validation study was carried out to estimate if the formula is reliable to predict LN metastasis. Lymphatic system invasion and venous system invasion were selected as independent parameters correlated with LN metastasis for EGC. The LN metastasis predicting formula was developed using these two factors by linear discriminant analysis. The formula is as follows: Y = 0.12 × (venous system invasion: 0, 1, 2 or 3) + 0.19 × (lymphatic system invasion: 0, 1, 2, or 3) - 0.14. If Y > 0, we judge that a patient with gastric cancer is susceptible LN metastasis. Prospective study demonstrated that sensitivity and specificity rates of this formula were 70% and 61.6%, respectively[27]. Flow chart for submucosa-invading gastric cancer after ESD is shown in Figure 1. This flow chart is indicating that if resected tumor through ESD invaded 500 μm below the muscularis mucosae, the LN metastasis predicting score is available. Y > 0 indicates that the tumor in question would be prone to LN metastasis. We defined patients who are satisfied with Y > 0 as a high-risk group (HRG) for LN metastasis and Y < 0 patients as a low-risk group (LRG) for LN metastasis. The flow chart means patients with HRG should undergo additional conventional gastrectomy. However, we think that less invasive treatment like as SNNS is more desirable for patients with LRG.

Fujii et al[23] investigated 130 submucosa-invaded gastric cancer. Absence of lymphoid infiltration and lymphatic system invasion were selected as independent significant factors which affect LN metastasis. They also developed LN metastasis predicting score and advocated a scoring system for additional gastrectomy following ESD based on prediction of LN metastasis (Figure 2). Lymphoid infiltration and the presence of lymphatic system invasion were scored as follows: +2 for lymphatic system invasion and -2 for involvement of lymphocystic infiltration, which was considered as a LN metastasis-inhibiting parameter. Next five pathological factors [minor axis length ≥ 2 cm, submucosal invasion depth ≥ 2000 μm, histological classification (undifferentiated) of submucosal cancer at the site of invasion, ulceration or scar in the lesion, and venous invasion] were scored +1 each when present. They concluded that a patient with total score 3 and more should be treated as high risk for LN metastasis and such patients are recommended to undergo additional gastrectomy. On the other hand, patients with total score less than 3 should be considered as low risk for LN metastasis and they don’t need to undergo additional gastrectomy. 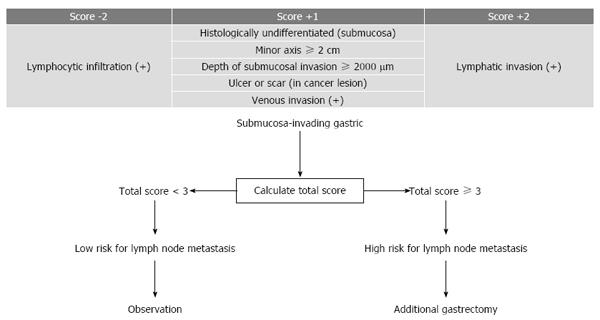 These predictive scores and treatment of flow chart after ESD seem innovative and original strategy for EGC. However, we need further additional clinical trials to validate clinical usefulness of the flow charts.

SNNS AS A SOLUTION TO PREDICT LN METASTASIS OF EGC

In spite of these constant efforts to predict LN metastasis using pathological parameters, it has been still difficult to predict LN metastasis accurately. Meanwhile, SNNS for EGC may become another possible and promising solution to resolve this problem. From early 2000s, articles which focused on SNNS for EGC have been published. Hiratsuka et al[28] demonstrated the usefulness of indocyanine green (ICG) for SNNS in particular T1 gastric cancer because of the high successful rate to predict SLNs. Kitagawa et al[29] showed the effectiveness of radio-guided surgery using gamma detection probe technology for SNNS. Technetium-99m-radiolabelled tin colloid was injected endoscopically before the surgery, and radioactive SNs were identified with a gamma probe. They concluded that the radioisotope is useful even for obese patients because it remains for enough time in the SNs after injection. In addition, Miwa et al[30] demonstrated the results of a regional multicenter clinical trial of SN mapping for gastric cancer using the dye-guided method. This was the first multicenter trial of SN mapping for gastric cancer. Miwa demonstrated that sentinel lymphatic basins contain truly positive nodes, even in cases with a false negative SN biopsy. Hence, they concluded that the sentinel lymphatic basins dissection are adequate procedure for LN dissection in patients with EGC.

We have reported the clinical usefulness of infrared ray electronic endoscopy (IREE) combined with ICG to detect illuminated SLN in patients with gastric cancer and duodenal tumors as compared with dye alone (Figure 3)[31-37]. Infrared ray has a wave length of around 805 nm. It is able to penetrate fatty tissues up to a depth from 3 to 5 mm. In brief, before the ICG injection, the gastrocolic ligament is opened using ultrasonic coagulation incision device without disrupting the gastro-epiploic vessels. After that 0.5 mL ICG (5 mg/mL; Diagnogreen; Daiichi Phar- maceutical, Tokyo, Japan) is injected endoscopically in four points of the submucosa surrounding the tumor with an endoscopic puncture needle. Twenty minutes after the injection, SN’s stained with ICG were observed with the naked eye and with IREE (Olympus Optical, Tokyo, Japan).

Ohdaira et al[32] focused on lymphatic drainage using IREE with ICG. One of the advantage of this procedure is that SNNS by IREE with ICG injection enables us to detect lymphatic vessels from the tumor easily. They investigated 161 patients with gastric cancer using IREE with ICG and revealed that the most common locations of the SNs, in each of the upper, middle and lower thirds of the stomach, were station No. 7 which is defined as LNs along the trunk of left gastric artery between its root and the origin of its ascending branch by Japanese Gastric Cancer Association. Yano et al[34] investigated 130 patients with gastric cancer (3381 LNs) who underwent SNNS by IREE with ICG injection and evaluated LNs by immunohistochemistry (IH) with anti-cytokeratin antibody staining. They reported that 15 patients (27 nodes) were diagnosed without metastasis by hematoxylin and eosin (HE) staining, which turned to metastatic by IH staining. However, all the 27 nodes with micrometastasis were inside the lymphatic basins. They concluded that even if LN micrometastasis is overlooked by intraoperative frozen section with HE staining, micrometastasis can be completely removed by lymphatic basins dissection.

Benefit of SNNS is not only to avoid unnecessary LN dissection but also to enable us performing local resection (LR) of stomach for patients with EGC with curability. Kitaoka et al[38], was the first to report the use of LR for treating early gastric cancer. Maintenance of curability and quality of life are essential to introducing LR for early gastric cancer clinically. Kawamura et al[39] described the usefulness of partial resection of stomach as compared to conventional gastrectomy. They assessed gastric emptying by 13C-acetate breath test in 60 patients who underwent distal gastrectomy with Billroth I reconstruction (DGBI) in 26 patients, LR in 34 patients. For the 13C breath test, 100 mg of 13C-acetate sodium salt was mixed in a test meal. Dietary intake and body weight change were significantly more reduced in the DGBI group than the LR group. In addition, significant acceleration of gastric emptying was observed in the DGBI group compared to that in the LR group by 13C breath test. They concluded that LR is an option for selected patients with EGC.

SN mapping concept seems reasonable approach to determine appropriate indications including pylorus-preserving gastrectomy, proximal gastrectomy and LR for cT1N0 gastric cancer. In particular, laparoscopic function-preserving surgeries should be performed for patients with negative for LN metastasis confirmed by SNNS. Earlier recovery after surgery and preservation of quality of life in the late disease phases can be achieved by limited laparoscopic gastrectomy with SNNS.

When we predict LN metastasis for ECG, we need at least pathological information derived from resected tumor through ESD. In particular, lymphovascular invasion, tumor depth and tumor size are the strongest LN metastasis predicting parameters for EGC. Basic strategy of additional treatment after ESD for patients with EGC is conventional gastrectomy. However, providing less invasive surgery such as SNNS for patients with EGC has potentiality to improve the quality of life of patients after surgery by preserving gastric function as compared to conventional gastrectomy.