AIM: To identify rates of post-discharge complications (PDC), associated risk factors, and their influence on early hospital outcomes after esophagectomy.

METHODS: We used the 2005-2013 American College of Surgeons National Surgical Quality Improvement Program (ACS-NSQIP) database to identify patients ≥ 18 years of age who underwent an esophagectomy. These procedures were categorized into four operative approaches: transhiatal, Ivor-Lewis, 3-holes, and non-gastric conduit. We selected patient data based on clinical relevance to patients undergoing esophagectomy and compared demographic and clinical characteristics. The primary outcome was PDC, and secondary outcomes were hospital readmission and reoperation. The patients were then divided in 3 groups: no complication (Group 1), only pre-discharge complication (Group 2), and PDC patients (Group 3). A modified Poisson regression analysis was used to identify risk factors associated with developing post-discharge complication, and risk ratios were estimated.

CONCLUSION: PDC after esophagectomy account for significant number of reoperations and readmissions. Efforts should be directed towards optimizing patient’s health pre-discharge, with possible prevention programs at discharge.

Using 2005-2013 data from the American College of Surgeons National Surgical Quality Improvement Program (ACS-NSQIP), we sought to identify the rate of PDC, their associated risk factors, and their influence on early hospital outcomes including readmission and reoperation. We believe that understanding these risk factors will provide additional insights to improve esophagectomy quality outcomes.

This study is a retrospective analysis using the 2005-2013 ACS-NSQIP database. ACS-NSQIP is a nationally-validated, risk-adjusted, and outcomes-based program created for the purpose of measuring and improving surgical quality care[18,19]. The program collects data on patients undergoing surgery from over 650 participating hospitals of varying size and academic affiliation[20]. Eligibility criteria for hospital participation include: hiring a surgical clinical reviewer who uses a standardized format to capture and review data from clinical records, identifying a Surgeon Champion to lead the program at the hospital, agreeing to program protocols, meeting minimum case standards, and paying an annual participation fee to ACS. Prospective, systematic data collection is performed on 150 preoperative and intraoperative variables, in addition to 30-d postoperative morbidity and mortality. This study was reviewed and approved by the Institutional Review Board of the Johns Hopkins University School of Medicine.

We selected patient data based on clinical relevance to patients undergoing esophagectomy and compared demographic and clinical characteristics. Three groups of patients were defined: no complication (Group 1), only pre-discharge complication (Group 2), and PDC patients (Group 3). Patients with esophageal/gastric cancer were defined with a diagnosis (International Classification of Diseases, 9th Revision, codes of 150, 150.1, 150.2, 150.3, 150.4, 150.5, 150.8, 150.9, 151, 151.0).

The primary outcome was PDC, which we defined as an event for which the time interval (days) between the initial operation and a complication was greater than the interval from operation to discharge. The secondary outcomes included hospital readmission (2011-2013) and reoperation (2012-2013). Complication types included from ACS-NSQIP were investigated. Prolonged length of stay and prolonged operative time, defined as stay or time greater than the 75th percentile, respectively, were also investigated. 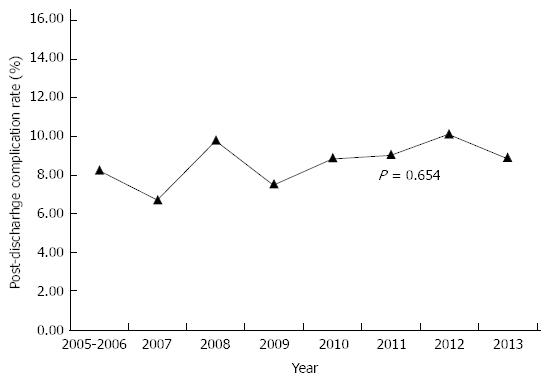 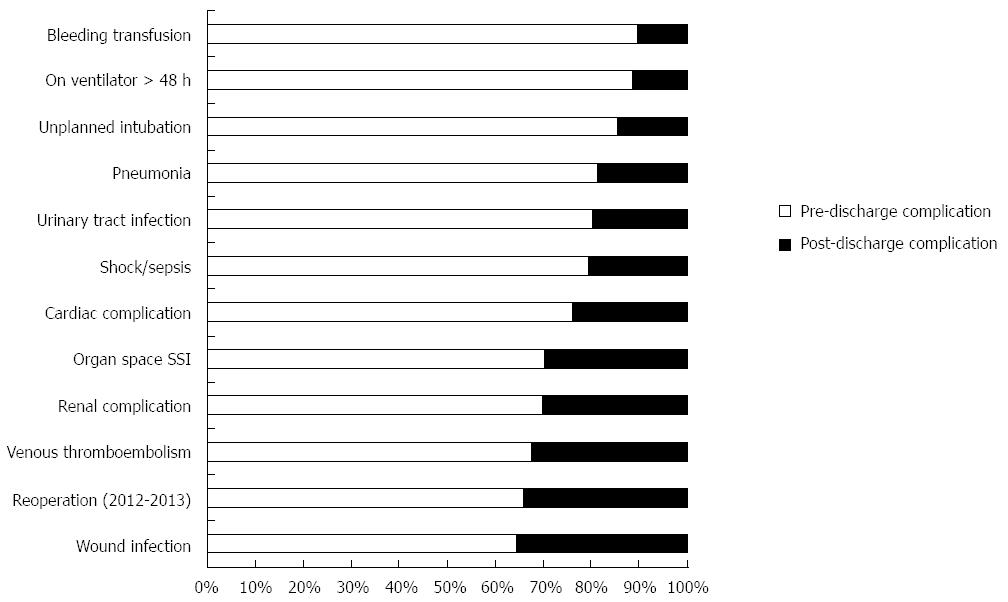 Although several studies have investigated postoperative complications and readmissions following esophagectomy, none to our knowledge have explored the distinct role of PDC on early hospital outcomes. This is the first study to use ACS-NSQIP to examine the rate of PDC, their associated risk factors, and their influence on early hospital outcomes after esophagectomy. ACS-NSQIP offers a unique opportunity to assess at a national, multi-institutional level these specific health quality measures that may be unavailable in other large, population-level databases. Our retrospective analysis demonstrates that PDC occur at a low rate but account for a significant number of reoperations and readmissions. Higher BMIs were associated with increased risk of PDC. PDC were different than pre-discharge complications and potentially preventable.

Of the patients with PDC, wound infection, pneumonia, and VTE were among common PDC that could serve as targeted areas for quality improvement. These PDC are consistent with prior studies examining perioperative complications after esophagectomy[21,22]. Interventions to reduce PDC, such as adopting best practices to prevent wound infection and VTE, may improve esophagectomy outcomes. In one study, selective anticoagulant thromboprophylaxis using a DVT risk factor index significantly decreased DVT rates after esophageal cancer surgery[23]. Another study showed that low molecular weight heparin prophylaxis resulted in a 72% reduction in DVT risk after general surgery[24]. These suggest that efforts aimed to reduce common complications after surgery may also be effective and applicable to esophagectomy and should be continued after discharge. Interestingly, PDC rates have remained similar over the studied years, revealing likely no significant changes in practice or indications.

Our modified Poisson regression analysis demonstrates several factors that may increase the risk of PDC and therefore enable us to stratify higher-risk patients for perioperative risk assessment. These include patients with BMI 25.0-29.9 and BMI ≥ 30, compared to normal BMI 18.5-25.0. Although obesity is associated with higher incidence of medical comorbidities like hypertension, diabetes, and cardiovascular disease[25], the association of BMI and complications after esophagectomy is conflicting. Several studies have suggested that overweight and obese patients may have increased risk for complications after esophagectomy, such as longer operative times[26] and greater risks for anastomotic leaks[27], respiratory complications[27], and surgical site infections[28]. However, other studies have shown that obese patients do not have more postoperative complications and longer hospital stays compared to non-obese patients[14,29,30]. Several routine measures implemented in the hospital setting to decrease the most common post-operative complications (i.e., early mobilization, incentive spirometry and pulmonary toilet, DVT prophylaxis, daily dressing changes) are not continued after discharge, and the lack of preventive actions may impact obese patients more than non-obese. As such, appropriate interventions for higher BMI patients may be beneficial and may include enhanced perioperative management of patient comorbidities, preoperative risk stratification, additional patient education, continuation of pulmonary toilet, exercise programs, and DVT prophylaxis after discharge and earlier follow-up. For example, one study has shown that performing preoperative risk analysis on pulmonary function and general status when selecting patients for transthoracic esophagectomy reduced postoperative morbidity rates[31]. Interventions targeting higher BMI patients undergoing esophagectomy may therefore reduce PDC rates.

We decided to separate the patients with pre-discharge complications to keep our groups as homogeneous as possible for fair comparison. Since these patients have a longer hospital stay (median LOS 14 d), a 30-d follow-up may not be long enough to record PDC. It was interesting, however, to see that the most common types of PDC are different than those occurring in the initial post-operative period. This information is helpful to the physician to identify patients at risk of PDC and to plan preventative measures.

The overall readmission rate in our study is 12.8%, consistent with another study’s rate of 18.6%[12]. From our study, 39.5% of PDC patients underwent reoperation (2012-2013) compared to 22.4% of pre-discharge complication patients. This suggests that reoperation may have been indicated due to complications that developed after discharge and subsequent delays in management. Even more striking is our finding that 66.9% of PDC patients were readmitted, compared to 6.6% of pre-discharge complication patients. Recent changes in health policy and reimbursements have brought issues of health care costs to the forefront, resulting in some hospital administrations advocating for earlier discharge of patients. Readmission has become a major focus from health care quality and cost-savings standpoints. However, the use of readmission as a quality metric is still debatable[32,33]. In the case of esophagectomy, efforts to reduce costs by promoting earlier discharge may increase readmission[16], reoperation, and PDC rates; hospital readmission after esophagectomy for esophageal cancer is also associated with poor survival[12]. One study has shown that postoperative complications lead to greater readmission rates after colon resection[34]. In bariatric surgery patients, PDC account for a substantial source of patient morbidity and readmissions[17]. Rather than emphasizing shorter hospital lengths of stay, putting more energy into preventing complications after esophagectomy, and optimizing patient health prior to discharge instead may lead to improved surgical quality outcomes and reduced hospital spending.

Despite the advantages of ACS-NSQIP, the database does pose some limitations to our study. ACS-NSQIP does not contain consistent information on tumor histology, margins, stage, surgical history, neoadjuvant chemotherapy (within 30 d preoperatively), and neoadjuvant radiation (within the last 90 d) that could otherwise provide greater context in interpreting our results. Several complications common to esophagectomy, such as anastomotic leaks, chyle leak, and delayed gastric emptying, are not captured in the database. ACS-NSQIP also identifies 30-d postoperative readmission rather than 30-d post-discharge readmissions, which may introduce immortal person-time bias and lead to shorter number of follow-up days for patients with longer hospital stays. Although PDC could lead to greater mortality, because ACS-NSQIP does not capture data beyond 30-d postoperatively, further studies examining long-term outcomes including mortality is warranted. Readmission data is available only from 2011-2013, but the large patient sample population within that cohort should prevent significant alterations in our conclusions. It is also uncertain whether our findings are applicable to all hospital settings, as hospital participation is voluntary and comprised primarily of academic, tertiary-care centers. Hospital size, setting, patient volume, teaching status, and individual surgeon experience also cannot be adjusted for.

In summary, PDC after esophagectomy account for a significant number of reoperations and readmissions. Adopting best practices to reduce common PDC like VTE and infection, and performing interventions for higher-risk individuals such as those with high BMI, should therefore be considered.

The authors would like to thank Mr. Edwin Lewis for his generous support of Dr. Lidor’s Department of Surgery Research Fund.

Esophagectomy is the mainstay treatment for esophageal carcinoma and can also be indicated for benign conditions with end-stage organ dysfunction or perforation. Despite improved surgical and medical care, post-esophagectomy mortality and morbidity rates remain suboptimal. Such disappointing outcomes after esophagectomy, compounded with national health policy changes that emphasize reducing hospital readmission rates and improving health care quality, have spurred growing interest in investigating quality measures related to esophagectomy. Using 2005-2013 data from the American College of Surgeons National Surgical Quality Improvement Program (ACS-NSQIP), we sought to identify the rate of post-discharge complications, their associated risk factors, and their influence on early hospital outcomes including readmission and reoperation.

These research findings can be applied to predict, identify, and prevent adverse outcomes in patients who have undergone esophagectomies. Implementing strategies to decrease common post-discharge complications like venous thromboembolism and infection should be considered, and directing our energies toward optimizing patient health prior to discharge may improve overall surgical outcomes.

This is a review of the ACS-NSQIP esophagectomy database, meant to identify post-discharge complications. It has a huge sample, a clear presentation and analysis, and an interesting discussion. It is without doubt an important topic deserving of evaluation.