An inverted Meckel’s diverticulum is a rare gastrointestinal congenital anomaly that is difficult to diagnose prior to surgery and presents with anemia, abdominal pain, or intussusception. Here, we report the case of 57-year-old men with an inverted Meckel’s diverticulum, who was preoperatively diagnosed using double-balloon enteroscopy. He had repeatedly experienced epigastric pain for 2 mo. Ultrasonography and computed tomography showed intestinal wall thickening in the pelvis. Double-balloon enteroscopy via the anal route was performed for further examination, which demonstrated an approximately 8-cm, sausage-shaped, submucosal tumor located approximately 80 cm proximal to the ileocecal valve. A small depressed erosion was observed at the tip of this lesion. Forceps biopsy revealed heterotopic gastric mucosa. Thus, the patient was diagnosed with an inverted Meckel’s diverticulum, and single-incision laparoscopic surgery was performed. This case suggests that an inverted Meckel’s diverticulum should be considered as a differential diagnosis for a submucosal tumor in the ileum. Balloon-assisted enteroscopy with forceps biopsy facilitate a precise diagnosis of this condition.

A 57-year-old man who had been repeatedly experiencing epigastric pain for 2 mo consulted at a clinic. He was then referred to another hospital due to a thickened intestinal wall observed on abdominal ultrasonography. His past medical history included depression and a gallbladder polyp treated by cholecystectomy. Physical examination and laboratory findings were unremarkable. An abdominal contrast-enhanced CT also showed a thickened small intestinal wall, with an elongated, intraluminal, fat-attenuating lesion in the lower abdomen (Figure 1). An upper gastrointestinal endoscopy and total colonoscopy were performed, but no abnormalities were found within the observed area. The patient was subsequently referred to our hospital for further examination. Retrograde double-balloon enteroscopy (DBE) was performed, which demonstrated an 8-cm, sausage-shaped, polypoid lesion that was located approximately 80 cm proximal to the ileocecal valve. A small depressed erosion was seen at the tip of the polypoid lesion, and intestinal villous mucosa was seen on the surface of the lesion (Figure 2). Using selective contrast-enhanced radiography with DBE, an elongated polypoid lesion was demonstrated in the ileum (Figure 3). Although Tc-99m pertechnetate scintigraphy was negative, a forceps biopsy from the tip of the depressed lesion revealed heterotopic gastric mucosa. The patient was diagnosed with an inverted Meckel’s diverticulum, and he underwent single-incision laparoscopic surgery 3 mo later. An excavation of the serosa was observed at the basal region of the polypoid lesion by laparoscopy. After a Hutchinson’s maneuver, segmental resection was performed. Pathological examination of the specimen revealed an 8.0 cm × 1.4 cm, sausage-shaped, polypoid lesion. Histological examination showed heterotopic gastric mucosa mimicking the pyloric glands at the tip of the lesion (Figure 4). The patient was discharged on post-operative day 6 without complications. 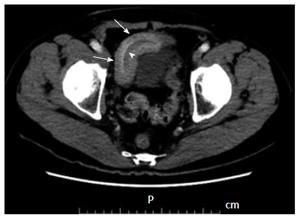 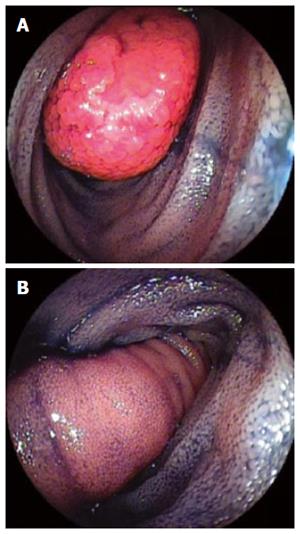 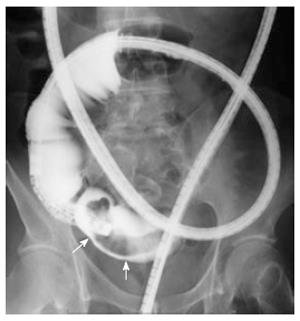 Figure 4 Pathological and histological examination. A: The opening of the specimen revealed an 8.0 cm × 1.4 cm polypoid lesion; B: Photomicrograph [hematoxylin and eosin (HE) stain] shows that the diverticulum was composed of all layers of the intestinal wall. Scale bars: 6 mm; C: Photomicrograph (HE stain) shows heterotopic gastric mucosa at the tip of the polypoid lesion. Scale bars: 600 μm.
DISCUSSION

A Meckel’s diverticulum is usually an asymptomatic condition, and many cases are incidentally discovered during a radiographic evaluation or during surgery performed for other reasons[1]. This condition causes symptoms in 4%-30% of patients[9], and possible complications include hemorrhage, bowel obstruction with or without intussusception, diverticulitis, and inversion. According to a recent report, the most common complaint in an inverted Meckel’s diverticulum is bleeding (80%), followed by anemia (78%) and abdominal pain (68%)[4]. The radiological features of an inverted Meckel’s diverticulum are similar to that of a pedunculated intraluminal polyp, especially lipoma. Small bowel series reveal an elongated, smoothly margined, intraluminal mass that parallels the long axis of the intestine and frequently has a bulbous or club-sharped tip. Abdominal CT shows typical inverted cases as having a central core of fat attenuation[1].

The preferred treatment for symptomatic Meckel’s diverticulum is surgery. Whenever an inverted Meckel’s diverticulum is diagnosed either pre-operatively or intra-operatively, the surgical procedure should be segmental resection. Laparoscopic resection is a safe and less invasive surgical procedure[1,4]. In this case, single-incision laparoscopic surgery was performed, which is a minimal access technique that can yield a reduction in scarring and consequently pain and suffering of the patients. Asymptomatic diverticula that are incidentally discovered remains controversial to date. The lifetime risk of developing complications is 4% up to the age of 20 years, 2% up to the age of 40 years, and 0% in the elderly population[1,4]. Therefore, preventive resection is recommended for patients younger than 40 years; for a diverticulum longer than 2 cm; diverticula with narrow necks, fibrous bands, or heterotopic gastric mucosa; or when the diverticula appears thickened and inflamed[4].

In the present case, an inverted Meckel’s diverticulum with heterotopic gastric mucosa was clearly viewed using double-balloon enteroscopy. Therefore, an inverted Meckel’s diverticulum should be considered as a differential diagnosis for a submucosal tumor in the ileum. Balloon-assisted enteroscopy combined with forceps biopsy enables a precise preoperative diagnosis.

A 57-year-old man had repeatedly experienced epigastric pain for 2 mo.

All laboratory tests were within normal limits.

An abdominal contrast-enhanced computed tomography showed a thickened small intestinal wall, with an elongated, intraluminal, fat-attenuating lesion in the ileum, and retrograde double-balloon enteroscopy (DBE) demonstrated a sausage-shaped, polypoid lesion that was located approximately 80 cm proximal to the ileocecal valve. A small depressed erosion was seen at the tip of the polypoid lesion.

Histological examination showed that the diverticulum was composed of all layers of the intestinal wall, and heterotopic gastric mucosa was seen at the tip of the lesion.

Although the reports of Meckel’s diverticulum diagnosed using DBE are increasing, those of inverted situation is rare. DBE is quite useful for diagnosis.